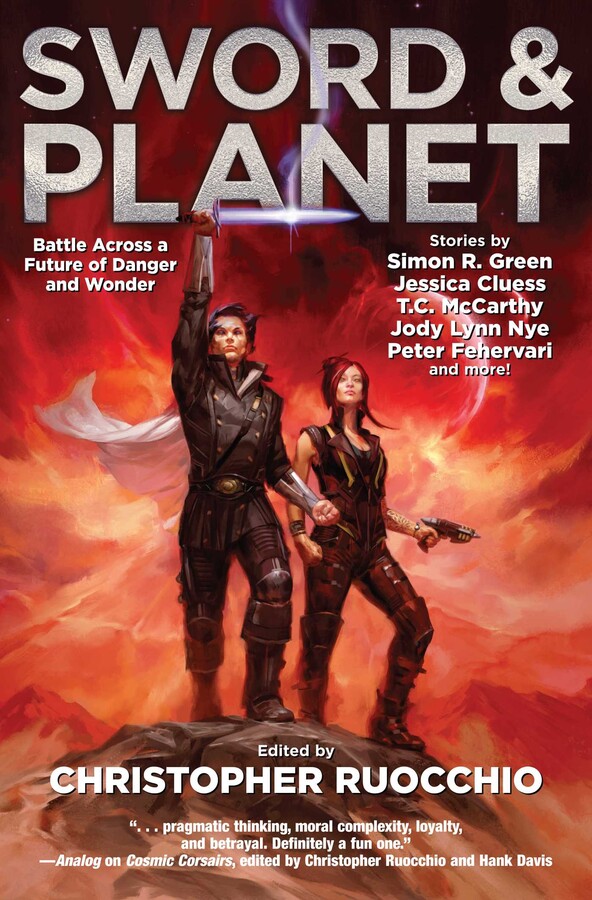 SCIENCE FICTION? FANTASY? IS IT TOO MUCH TO ASK FOR BOTH?

The distant future—like the distant past—is a place of myths, of legends, and of great heroes. Cyborg knights battle extraterrestrial demons to rescue a peaceful village. A young girl unlocks an ancient power to protect her world from offworld colonists. Here are stories not where magic is science, but with magic and science. Not knights and castles, but knights and starships. Wizards and ray guns. Swords and planets.

In D.J. Butler’s “Power and Prestige,” a pair of two-bit mercenaries are hired to solve a murder in a labyrinth beneath a crumbling city at the end of time. A young knight must face down an alien menace and awaken the power within in R.R. Virdi’s “A Knight Luminary,” and in “Saving the Emperor” Simon R. Green takes us deep into the Imperial City of Virimonde . . . and offers a glimpse at how the Deathstalker clan rose to power and fame.

About Star Destroyers, coedited by Christopher Ruocchio:
“. . . spectacular space battles and alien contacts . . .  themes of military ethics, the uses of artificial intelligence, and the limits of the capacity of the human mind. . . . it is the human interactions and decisions that ultimately drive the stories. . . . will appeal to fans of military and hard science fiction and any readers fascinated by the possibilities of space travel.”—Booklist

“. . . stories of giant spaceships at war, at peace, and in the often-gray areas between. . . . a worthy addition to a long tradition of ship-based fiction, and its authors portray captains, arcane astrogators, and civilian child passengers with equal depth. It’s recommended for fans of military SF and space adventure.”—Publishers Weekly

“. . . you’d probably expect some tight, action-filled space opera stories of giant space battles . . . and there’s some of that. But there are also espionage stories, rescue missions, political conflicts, alternate histories, even a few humorous tales. . . . each author took the premise in a different direction . . . if I had to identify one common feature to all the stories, it would be that they’re all fun. . . . Like it says, big ships blowing things up. What’s not to like?”—Analog