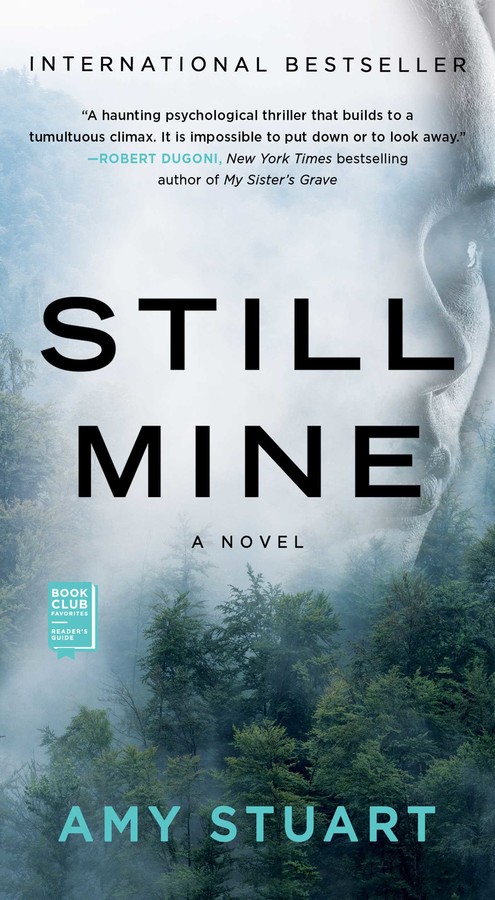 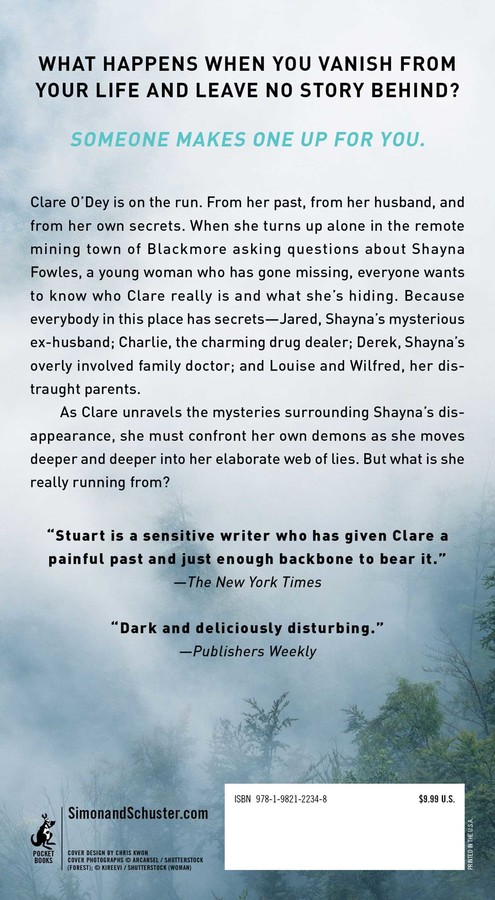 From internationally bestselling author Amy Stuart comes a “dark and deliciously disturbing” (Publishers Weekly) novel about one woman’s search for answers when another woman goes missing from a desperate, drug-addled mountain town where everyone is implicated in her disappearance.

What happens when you vanish from your life and leave no story behind?
Someone makes one up for you.

Clare is on the run. From her past, from her husband, and from her own secrets. When she turns up alone in the remote mining town of Blackmore asking questions about Shayna Fowles, a young woman who has gone missing, everyone wants to know who Clare really is and what she’s hiding. Because everyone in this place has secrets—Jared, Shayna’s mysterious ex-husband; Charlie, the charming drug pusher; Derek, Shayna’s overly involved family doctor; and Louise and Wilfred, her distraught parents.

As Clare unravels the mysteries surrounding Shayna’s disappearance, Clare must confront her own demons, as she moves deeper and deeper into her elaborate web of lies. But what is she really running from?

Haunting and electrifying, Still Mine is a thriller that is “impossible to put down” (Robert Dugoni, New York Times bestselling author of My Sister’s Grave).

With the moonless sky, Clare doesn’t see the mountains closing in. But then the road begins to rise and she knows she’s driving through the foothills, then come the switchbacks and the hum and pop in her ears, and finally the peaks and shadows, blank spots in the ceiling of stars. By dawn the mountains crowd the long vista of her rearview mirror, she is deep among them, and Clare guesses she’s covered nearly six hundred miles since sunset.

Drive west into the mountains, Malcolm said. Then cut north to Blackmore.

Clare climbs one last hairpin turn before signs of life pepper the roadside, peeling billboards first, then a scattering of ramshackle buildings. Her car lurches and revs, the ascent of this narrow road too much for its old engine. She passes a sign hammered right into rock: WELCOME TO BLACKMORE: ­POPULATION 2500, the word zero spray-painted across it in black. The road flattens out and Clare reaches the row of storefronts that marks the town proper. Most of them are shuttered with plywood, the main strip devoid of cars and people.

Beyond the lone stoplight Clare finds the motel. She turns in and parks. Weeds grow through cracks in the asphalt, the motel L-shaped and bent around an empty swimming pool, its neon sign unlit. The barrenness washes over Clare, eerie and surreal, like a movie set built and then abandoned. Panic cuts through her, a grip tight around her chest, the coffee she’d picked up at a gas station hours ago still whirring through her veins.

The folder Malcolm gave Clare sits on the passenger seat. She flips it open. On top is a news article dated ten days ago: “Blackmore Woman Missing Since Tuesday.” Next to the text is a grainy photograph of a gaunt and unsmiling woman named Shayna Fowles. Clare examines the photo. They are roughly the same age, their hair the same deep brown, their skin fair, alike in certain features only. Is she imagining the resemblance, imposing herself on this woman?

This is your job, Malcolm said. You will go to Blackmore. See what you can find.

The car fills with the dampness of the outside air. Clare leans back against the headrest and closes her eyes. She thinks of Malcolm across from her in that diner booth, sliding the folder over to her, his own meal untouched. She had wanted only to get away from him, and Blackmore was the option on offer. Now she must gather herself up, muster the nerve to introduce herself to strangers, tell them her name, or at least the name Malcolm chose for her. Clare grips the dewy handle of the car door and lifts her backpack. Though she hasn’t worn her wedding ring in months, her finger still bears its dent.

At the motel reception Clare rings the bell once, then again when no one comes. She can hear the muffled din of a TV. Behind the desk the room keys hang in a neat row. Black mold snakes around the windows and patches the carpet in the corners.

Nothing. In her exhaustion, Clare cannot decide what to do next. At dawn, she’d pulled in to a lakeside rest area, walking straight past the picnic tables and the outhouse, wading thigh deep into the lake, catatonic, transfixed by the vast, jagged landscape of snow-peaked mountains. A foreign land. She’d hoped to take a warm shower. Malcolm told her about this motel. Clare slams her hand down hard on the bell.

The door at the far end of the office opens. A man in his sixties peers through, wiping his mouth with a napkin.

“We look open to you?” He tosses the napkin over his shoulder.

“The door was unlocked.”

The man is gray haired and rosy cheeked. An old family portrait hangs on the wall to his right, a younger version of him the beaming father to two red-haired boys, his hand resting proudly on his pretty wife’s shoulder.

“If the rooms are still standing,” Clare says, “maybe I could just—”

“I’ve never seen you before,” he says.

“I’ve never been here before.”

“Landscapes, mostly. Anything off the beaten track.”

“No one around here likes getting their picture taken,” he says, his voice flat.

“Like I said. Landscapes. Not people.” Clare pauses. “Is there another place in town I could stay?”

Clare gropes through her bag for her car keys. Just arrived and already she’s failed at her first task. This motel might have been busy once, when Blackmore was still a bustling mining town, when there were jobs for everyone, money to go around, people to visit. Maybe this man’s sons had been miners. Maybe they were underground five years ago when the mine blew up and killed three dozen of Blackmore’s men. Clare detects a slight softening in the motel owner, his shoulders relaxing. He peels himself off the wall and approaches the desk.

“We had a bad melt in the spring,” he says. “All twenty rooms flooded. I’ve barely had a customer in months. Even if I wanted to, I couldn’t help you.”

“There are plenty of mountain towns. You could pick another one.”

Already her story feels like too much of a ruse, arriving in Blackmore alone and unannounced. On the drive she’d anticipated the questions the attendant just asked of her. Who are you? Why are you here? She’d rehearsed her answers. She and Malcolm had been hasty in picking photography as her cover, the one skill in her thin repertoire now ringing false on delivery. The attendant walks around and props the door open to usher her out.

“Turn around,” he says. “Drive back down the hill. That’s my advice.”

Clare retraces her steps to the car. The mountains are cloaked in low clouds, Blackmore’s main road fogged from view. She hears the bolt of the office door behind her. Clare knew full well the reception here would be cold. She grew up in a small town beset by the same woes as Blackmore. She remembers the way her neighbors closed rank when strangers turned up, all prying eyes unwelcome. Who knows what the motel owner sees when he looks at Clare? Maybe he knew Shayna Fowles, maybe his sons were friends with her. Maybe it rattles him, one woman gone missing and another turning up out of nowhere, a stranger in his midst. 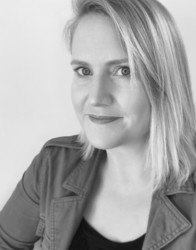 Amy Stuart is the #1 bestselling author of three novels, Still Mine, Still Water, and Still Here. Shortlisted for the Arthur Ellis Best First Novel Award and winner of the 2011 Writers’ Union of Canada Short Fiction Competition, Amy’s writing has previously appeared in newspapers and magazines across Canada. In 2012, Amy completed her MFA in Creative Writing through the University of British Columbia. She lives in Toronto with her husband and their three sons. Connect with her on her website AmyStuart.ca and on twitter @AmyFStuart.