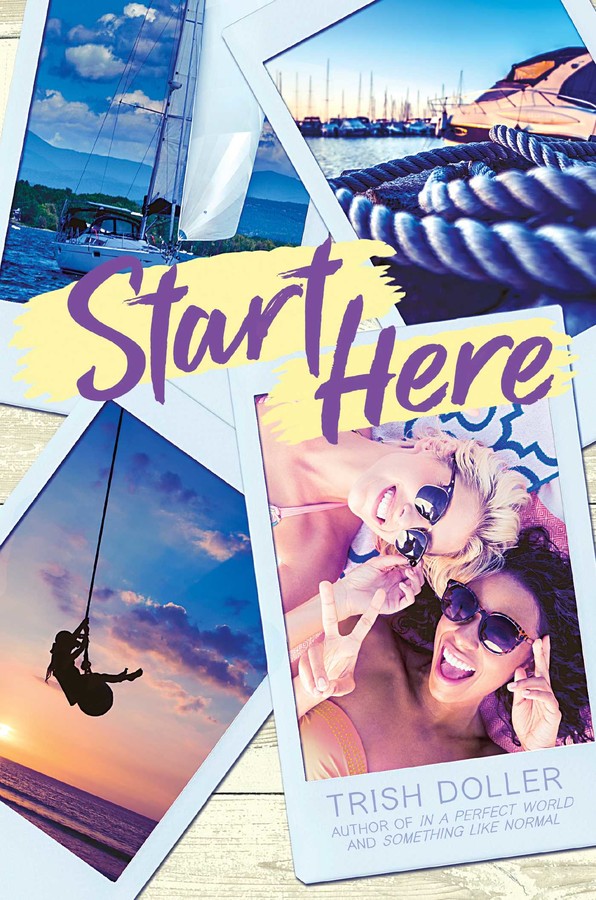 By Trish Doller
LIST PRICE $18.99
PRICE MAY VARY BY RETAILER

Two teens go on a life-changing sailing trip as they deal with the grief of losing their best friend in this heartwrenching, hopeful novel from the author of Something Like Normal and In a Perfect World.

Willa and Taylor were supposed to spend the summer after high school sailing from Ohio to Key West with their best friend, Finley. But Finley died before graduation, leaving them with a twenty-five-foot sailboat, a list of clues leading them to destinations along the way, and a friendship that’s hanging by a thread.

Now, Willa and Taylor have two months and two thousand miles to discover how life works without Finley—and to decide if their own friendship is worth saving.

From acclaimed author Trish Doller comes a poignant tale of forgiveness, grief, and the brilliant discoveries we make within ourselves when we least expect it.

Start Here Finley
FINLEY SITS CROSS-LEGGED ON HER bed, wearing the glossy blue Coraline wig she bought last Halloween. Her parents had put the kibosh on trick-or-treating when she became a teenager, but she and her friends still dressed up to hand out candy to the neighborhood littles. Last year Finley wore the yellow raincoat and matching boots of her favorite literary character. Today, along with the blue wig, she’s wearing a T-shirt that says THE FUTURE IS FEMALE. She has great expectations for the rest of the world, but for Finley Donoghue, the future is now.

She checks out her mirror image on the laptop screen in front of her and crinkles her freckled nose. She doesn’t look much like herself anymore. There are dark circles under her eyes that no amount of concealer can hide. And under the wig, her actual light-brown hair—which used to hang almost to her waist—now resembles baby duck fuzz. Which is fine for baby ducks, but not so much for a girl who loved the way her ponytail would swing as she bounced on the sidelines at football games. All her clothes have gotten baggy, but not in an intentional, sexy way. She dusts a little bronzer across her cheeks to tone down the paleness of her skin and shines her lips with some rose-colored gloss. Satisfied—at least as satisfied as she’s going to get—Finley presses the record button on her computer and smiles until her cheeks dimple.

“Two years ago, we bought an old boat and made a plan to sail to Key West. We circled a date on the calendar, and by my calculations, that day is tomorrow.” Sadness sinks like a stone in her heart, stealing her breath, and her smile slips. “I always believed the three of us would be going together. I never expected my body to have plans of its own. But here we are. Or rather, here you are.”

Coach Kaman was big on posture. At the beginning of each season, she’d tell the cheerleaders to pretend they were marionettes with strings running through their spines and out the tops of their heads to keep them up straight. “Strings, girls!” she’d shout, whenever they were slouching. Finley pulls her imaginary string and sits taller to keep from slumping back against the pillows. Once upon a time, she could make a running roundoff into a back tuck look effortless. Now the simple act of living is exhausting.

“Since I can’t be there, I’ve created a list of clues to points of interest along the route. I’m sure most of them will be super easy, but others . . . okay, so . . . I’m never gonna know if you don’t follow the clues. Or even what you might discover if you do,” she says. “But if you decide to play along, the list and some other stuff you’ll need for the trip will be waiting for you on the boat.”

Tacked to the wall beside her bed is a photo that Taylor snapped with her instant camera just a few days ago, the day Finley’s friends promised they’d take the trip without her. Finley had been wearing her Coraline wig that night too. In a show of solidarity, Willa wore a gray plastic Viking helmet with horns and yellow yarn braids, while Taylor’s hair was stuffed up into a giant rainbow-colored puff like you see sports fans wearing in crowds at football games on TV. The colors have the same washed-out quality as the pictures in her grandma’s old photo albums, as though their friendship has already stood the test of time. Finley smiles at the photo and turns back to the laptop to continue the video. By the time Taylor and Willa see it, she will be past tense.

“You know . . . the dying part doesn’t scare me anymore.” The first time Finley faced death, she was four years old and the oncologist told her parents she had six months to live. She’s not unaware of how fortunate it is that she’s had thirteen years instead, and she’s tried to live them as fully and fearlessly as possible. “But I don’t want to leave everyone I love behind. I just . . . I don’t want you to forget about me.”

She presses pause with one hand as she scrubs away a tear with the other. She can edit the video later, but now she needs a break. She curls into a fetal position and sobs, wishing she could start her life over again, this time without leukemia.

Finley already misses the weekly meet-ups she used to have with her dad at the coffeehouse across the street from his condo downtown. Living full-time with her mom, Finley didn’t always see him every day, so they would order the featured coffee of the week before settling down on the comfy couch to catch up. The last time, her dad confessed to joining an online dating service. They browsed profiles together, and Finley talked him through his first contact with a pretty woman (his own age, thankfully) who looked nothing like her mom (also, thankfully). Now he visits Finley daily, just in case it’s the last day. Maybe, she thinks, she should ask her dad to break her out of home hospice for one last latte.

Finley will miss Decembers. She and her mom would pick a date, cue up a holiday playlist, and spend an entire day baking Christmas cookies. Finley’s favorites were the frosted cutouts. She loved rolling out the dough on the floured kitchen island and trying to cut as many cookies as she could with each pass. She loved smashing candy canes to make peppermint bark. She loved browning the butter for chocolate chip cookies. She loved the smell of the spices they used to make German lebkuchen for Grandma, since she was the only one who ever actually ate them. Finley and her mom would sing along with the Christmas songs and sample so many of their creations that they’d be sick of cookies before the holiday season had even really begun.

Finley will miss her sister starting high school. She worries about how Regan is going manage without someone to guide her. Finley considers leaving a list of things her sister should know, but Regan has spent the better part of a year in the shadow of cancer. Maybe she wants to forge her own path and make her own mistakes. Still, Finley makes a mental note to give Regan all her old World History exams. Mr. Rupp uses the same questions every year.

But most of all, Finley will miss Taylor and Willa.

Taylor, her very first friend. They bonded over the sand table on the first day kindergarten, and when Finley’s mother came to pick her up from school, the two girls were sitting together in the big claw-foot bathtub that their teacher had converted into a reading nook, sounding out the words in Don’t Let the Pigeon Drive the Bus! Over the years Finley has made so many friends, but she loves Taylor, who laughs with her whole body. Taylor, who won’t admit she cries when she watches Nicholas Sparks movies. Taylor, who makes her feel the most like home.

It was different with Willa. First, because Finley wasn’t always kind to her. Finley suffers private shame whenever she remembers how all the girls in their grade—including her—used to shun Willa because her school uniform was too big and she only ate peanut butter sandwiches for lunch. They’d squeeze together at the opposite end of the lunch table as though poverty were contagious. Now Finley knows that Willa is resourceful and brave and funny and so fucking smart—and Finley considers it a privilege to be her friend.

It’s physically painful to know that their lives will go on without her. That Finley’s best friends will make new best friends and these people will be the ones to celebrate the good news and commiserate the bad. They’ll be college roommates, wedding attendants, godparents. They’ll know things about Willa and Taylor that Finley will never know.

Her tears take a long time to subside and a bit longer after that before her eyes aren’t quite so puffy. She unfolds and sits back upright to repair her makeup and finish the video. Her nose is a little pink, but maybe they won’t notice.

“Even though I won’t be with you, I hope you have an epic adventure. But more than that, I hope it will be the kind of trip that changes your lives. So, if you’re ready to begin . . .” Finley leans close and gives her friends one last dimpled smile. “Start here.” 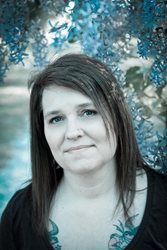 Trish Doller is the author of Something Like Normal, which was an ABA New Voices Pick and a finalist for NPR’s Best-Ever Teen Novels, among many other accolades; Where the Stars Still Shine; The Devil You Know; In a Perfect World; and Start Here. She has been a newspaper reporter, radio personality, and bookseller, and lives in Fort Myers, Florida, with a relentlessly optimistic Border Collie and a pirate.

By Trish Doller
LIST PRICE $18.99
PRICE MAY VARY BY RETAILER