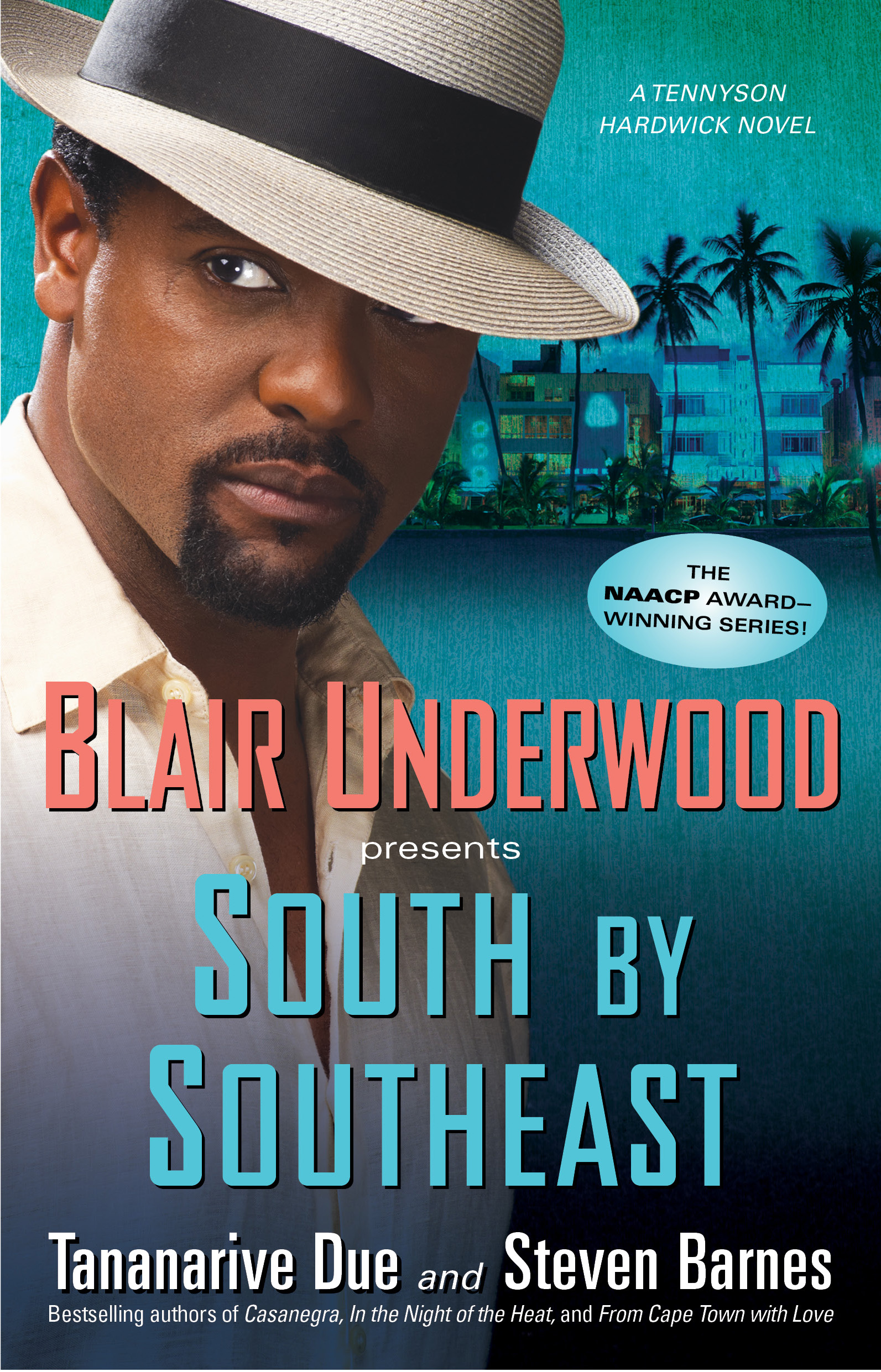 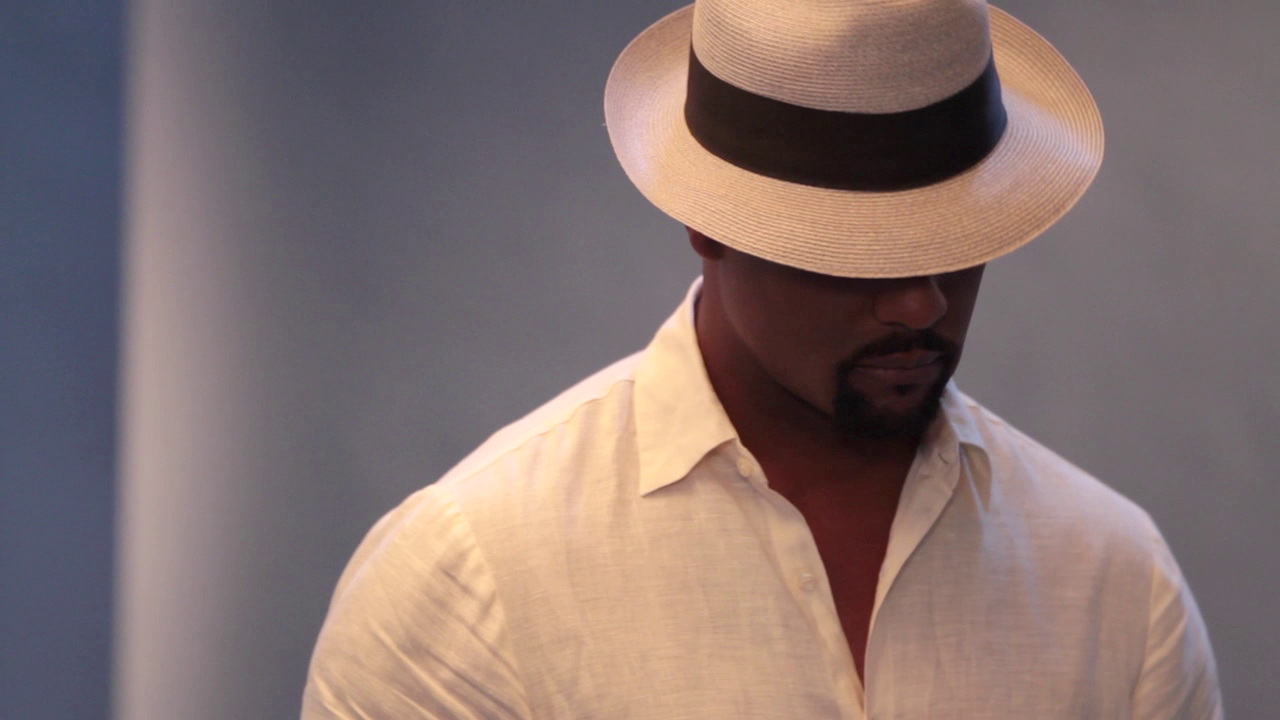 Photoshoot for SOUTH BY SOUTHEAST with Blair Underwood 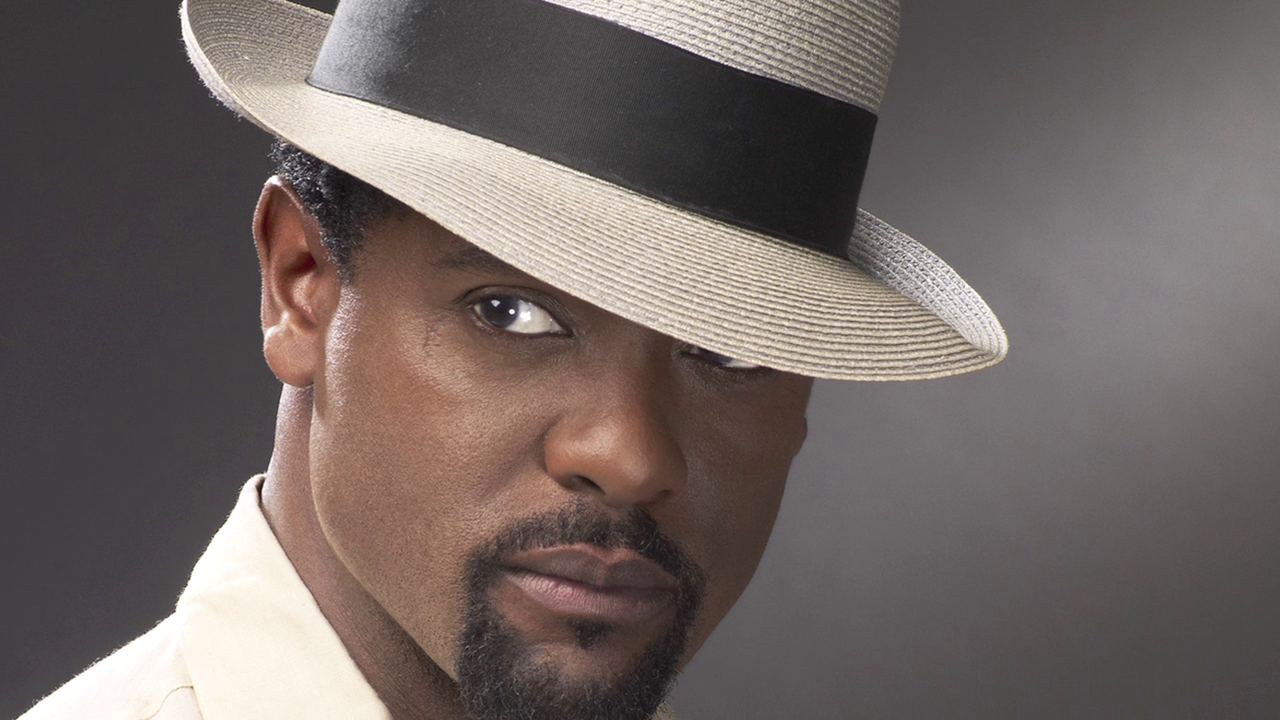 Author/Actor Blair Underwood Discusses His Novel In the Night of...

By Blair Underwood, Tananarive Due and Steven Barnes
LIST PRICE $16.00
PRICE MAY VARY BY RETAILER

The fourth installment in this award-winning mystery series draws actor-turned-super-sleuth Tennyson Hardwick into his most challenging case, compelling him to face the unthinkable: save his daughter or the woman he loves.

South by Southeast, a title inspired by the master of suspense, Alfred Hitchcock, finds Tennyson and his family in South Beach, Florida, where he is filming his role in a television detective series. Ten’s soon-to-be-adopted daughter, Chela, runs into old friend Maria from her earlier days as a prostitute in Los Angeles. The pair dives into the South Beach club scene, but Maria mysteriously goes missing.
When Maria’s body washes ashore, Chela and the authorities fear that her suspicious death is connected to a serial killer preying on young prostitutes. Tennyson believes he knows who the killer is, but the suspect escapes when the actor-detective tries to capture him.
When it’s believed the suspected killer may have committed suicide, things return to normal for Ten and his family. But the respite doesn’t last long, and Tennyson discovers someone is after him, his girlfriend, and Chela. Realizing it’s the killer who’s terrorizing him, Ten is presented with a lose-lose dilemma: save his daughter or the woman he loves.
In a pulse-pounding thriller that could be described as Walter Mosley’s Easy Rawlins meets Miami Vice, Tennyson Hardwick is back big time with his trademark sexiness, sizzle, and James Bond-like sophistication.

ALL ACTORS DREAM of a meeting that will change our lives forever, but I didn’t dare hope that Gustavo Escobar would be mine. Even my agent had no idea why Escobar had called me. Escobar was an Oscar-nominated director on a hot streak, and I was lucky to have a job playing a corrupt lawyer on one of the last surviving soap operas.

After twenty years in the industry, I no longer believed in the Big Bang. My microscopic part in a respected film set during the Harlem Renaissance, Lenox Avenue, hadn’t done much for my career. And the last two Hollywood heavy hitters who had contacted me—both women—craved skills that had nothing to do with my acting. Let’s just say I was wary of calls from powerful strangers.

So when Escobar hadn’t shown up by nine o’clock for our eight thirty dinner meeting, I was sorry I had agreed to meet him without more questions. Once again, the joke was on me.

But it was hard to nurse a bad mood inside La Habana.

La Habana was L.A.’s new ethnic restaurant du jour, modeled after a 1930s Cuban supper club. That night, a full orchestra played a rousing rumba against colorful walls splashed with artificially aged murals of palm trees and revelers in old-fashioned Cuban dress. Black-and-white footage of bandleaders Beny Moré and Arsenio Rodríguez flickered on overhead screens. At least I would have an excuse to call my former girlfriend, April; I was glad for any novelties to bring us together.

I was pulling out my phone to give my agent the bad news when a hand rested on my shoulder. “Lo siento,” a man said. “Sorry, I’m on Cuban Time. Gus Escobar.”

I started to stand, but his firm hand on my shoulder told me not to bother. Instead, Escobar sat across from me with a wide smile, sweeping off his white fedora.

I was surprised to note from his short-trimmed graying hair that Escobar was probably in his fifties, long past the norm for an overnight success in Hollywood. He had a slightly rounded midsection, but he carried himself fluidly, like a man who was fit and comfortable in his own skin. His round, thick-framed black eyeglasses were prominent, more fashion than function. His skin had only a whisper of a suntan, so I wouldn’t have guessed his Latino heritage if I hadn’t known. His accent was as much Brooklyn as Havana.

“I lived in New York too long,” he said. “I never get used to the traffic.”

“No problem,” I said with my trademark grin. “Just glad to meet you, Mr. Escobar.”

“No, no, please, it’s Gus. You have to try the Bucanero beer. They keep extras on ice for me. Oye, Ramon!” He signaled for the waiter with two fingers.

Like a lot of Hollywood types, Escobar was broadcasting himself at full wattage, creating a character, but I liked him. Rather than focusing on himself, he pulled his chair closer and gave me his attention, as if I had summoned him. “You’re kind to make time for me on short notice,” he said. “I’m such an admirer. I saw Lenox Avenue, and you stole the scene. But Sofia Maitlin and I are distant cousins, did you know? She’s told me so many good things. She said you’ve never gotten full credit, but you’re a hero.”

Here it comes, I thought, my grin turning to concrete. A year before, I’d helped an A-list actress save her adopted South African daughter from a kidnapping ring. I’d forgotten that Maitlin shared Escobar’s Cuban lineage on her mother’s side. I was sure Escobar was about to offer me a job as a bodyguard, and I wasn’t interested.

But I was wrong. Escobar reached into his aged leather satchel and pulled out a script, which he nudged my way on the table. The title showed through the plastic sleeve: Freaknik.

“For your eyes only,” Escobar said. “I have a beautiful part for you. We start shooting in Miami this fall.” Then he waited for my response as if his livelihood depended on my answer.

The floor seemed to shift beneath my feet. I was glad the beer had arrived, because I needed a swig of moisture against my dry throat. I didn’t want to look as shocked as I felt.

I wouldn’t know. I hadn’t tasted anything. My mind was still stuck on Escobar saying he had a part for me.

Three months before, Escobar had been featured on the cover of Entertainment Weekly during the Oscar campaign for his last film, Nuestro Tío Fidel, his arty biopic of Fidel Castro. He had lost the Best Director Oscar to Martin Scorsese, but barely. Len Shemin, my agent, had told me that his entire client list would kill to be in Gustavo Escobar’s next film.

“Why me?” Len would have kicked me under the table if he’d been there, but I asked.

“Lenox Avenue,” he said. “The fire in you. I want that fire for Freaknik.”

I wanted to hear more, but a respected young actor passing our table—I won’t say who—did a Scooby-Doo double take when he saw Escobar. He barely hid the who the hell are you glance he shot my way before he stretched out his hand to the director. He gushed at Escobar like a college coed meeting the team quarterback. Escobar was polite and patient while the actor angled for a meeting, but Escobar’s eyes frequently apologized to me for the intrusion.

“Man, I’ve wanted to tell you,” the actor went on. “I’m blown away by your human portrait of Fidel. Our government talks shit about him, but you weren’t afraid to show the good he’s done. You didn’t take the easy road.”

Escobar shrugged. “Truth is in the eye of the beholder, but gracias.”

The actor excused himself reluctantly, his last gaze toward me full of burning envy. I gave him a mock salute before he walked away. Adios, asshole.

I’d watched Nuestro Tío Fidel to prepare for the meeting, but Fidel hadn’t seemed sympathetic to me in the film, which chronicled his transformation from a young revolutionary to a frail, paranoid dictator. Reviewers had compared Fidel’s depiction to Michael Corleone’s journey in The Godfather and The Godfather Part II. From what I’d heard, the Cuban exile community in Miami had practically proclaimed Escobar a patron saint.

“Fidel’s good side?” I said. “Was that what you were trying to show?”

“No man is only one thing.” Escobar winked, and I was sure he wasn’t talking about Fidel anymore. “The good and the bad are always at war.”

My father often told me how his pastor could stare at any congregant and see his story. That was how I felt sitting across from Escboar that night in La Habana, watching the glow of insight in his eyes. If he’d talked to Sofia Maitlin about me, he had doubtless spoken to others. He knew details about my history that I’d tried to bury in a deep hole. He seemed to know I was broken, afraid to dream, that I’d almost talked myself out of meeting him.

He might even know I had killed a man. Had Maitlin guessed and told him?

I wanted to say more. To confide. To confess. To explain.

Escobar nodded, as if I had spoken aloud. He sighed, and tears suddenly shone in his eyes, erased when he blinked. “Let me tell you something,” he began. “I lost everything and everyone as a boy. People ask why I would follow Fidel with a horror movie. I ask, why not? Loss is one of the true universal experiences. Our walking dead follow us. They know us as their own.”

For the next two hours, while patrons came and went and the orchestra packed up its music, Escobar talked to me about his project. Freaknik was a zombie movie only on the surface, he said. “This film, at its heart, is about love and redemption in the face of unspeakable evil,” Escobar said, tapping the script. “The ultimate trial. Like me, Tennyson, you’ve known trials. That’s why my vision won’t be complete without you.”

April and my father often said everything happens for a reason, but I never believed it until that moment. My worst experiences had led me to a table with a stranger who was willing to help me build a future in Hollywood. It wasn’t just the best night of my career; it was one of the best of my life.

If only I had known what real horror would be waiting in Miami.

All of us are the walking dead. 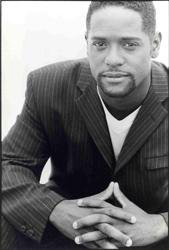 Two-time Golden Globe nominee and Emmy, Grammy, and seven-time NAACP Image Award recipient Blair Underwood has distinguished himself as an award-winning actor, director, and producer. He has starred in Sex in the City, Self Made: Inspired by the Life of Madam C.J. Walker, and Disney Channel’s The Lion Guard. He lives in Los Angeles, California. Follow him on Twitter at @BlairUnderwood. 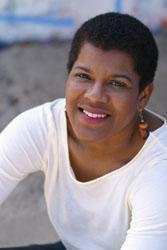 Tananarive Due is an American Book Award-winning, Essence bestselling author of Blood Colony, The Living Blood, The Good House, and Joplin’s Ghost. She lives in Atlanta, Georgia. Visit her blog at TananariveDue.blogspot.com.

Steven Barnes is an award-winning author of twenty-three novels, including the New York Times bestseller The Cestus Deception. Visit his website at LifeWrite.com.

“A sizzling mystery that will keep you guessing to the very end.” —Essence

“The pace is taut, the dialogue is snappy, and it’s hard not to fall for Underwood’s fallen hero.” —Entertainment Weekly

“Hold on, there’s bound to be some turbulence.” —The Washington Post

By Blair Underwood, Tananarive Due and Steven Barnes
LIST PRICE $16.00
PRICE MAY VARY BY RETAILER