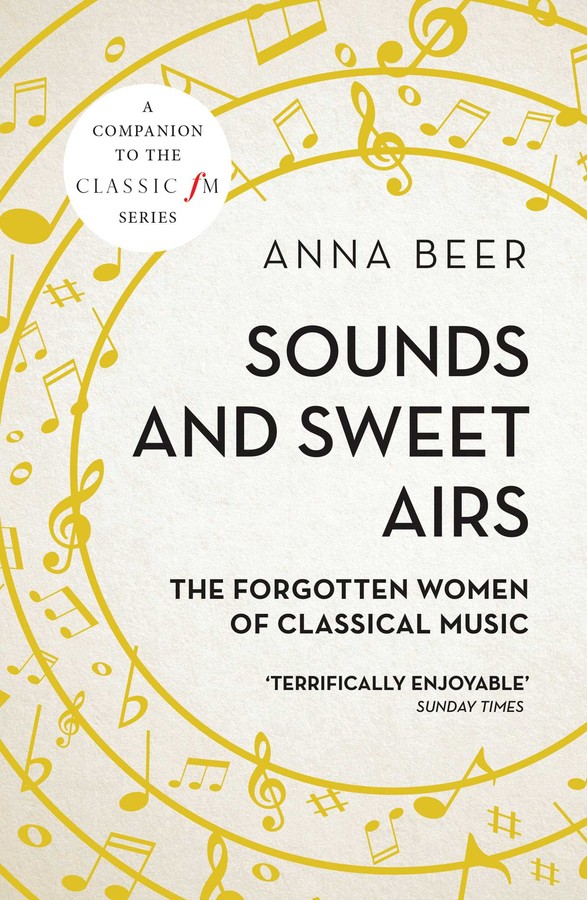 A companion to the Classic FM series

Since the birth of classical music, women who dared compose have faced a bitter struggle to be heard. In spite of this, female composers continued to create, inspire and challenge. Yet even today so much of their work languishes unheard.

Anna Beer reveals the highs and lows experienced by eight composers across the centuries, from Renaissance Florence to twentieth-century London, restoring to their rightful place exceptional women whom history has forgotten.

‘Beer’s writing is lucid, engaging and exuberant, strongly evoking the cultures and atmospheres that surrounded her subjects…the book in general is terrifically enjoyable and accessible, and leaves one hankering for a second volume.’

‘A meticulously researched, engrossing read, vividly bringing its eight subjects to life. It should appeal not only to music connoisseurs but to anyone interested in social and cultural history – and women’s place in it.’

‘Such traits, as Beer laments, are still with us…All the more important, then, for excellent books like this one to remind us of what we are all missing’.

'Offers vivid, colourful context on a situation that is echoed back through the centuries…Readable and wide-ranging, Beer's deft sketches are an elegant introduction to their subjects'.

'Beer's meticulously researched book is a vital step in the battle to overturn that ultimate injustice'.

'Beer has an eye for detail, and gives us a vivid sense of the stratagems these gifted, determined women had to employ'.

'In this riveting book Anna Beer wades through centuries of prejudice from the fear of women composing at all…to the persistent unwillingness to perform, discuss or distribute their music'.

''[A] stimulating and engaging book, written with passionate enthusiasm and a light touch'.

‘I am constantly in search of books that explore the lives of women who have been dismissed or overlooked by history, and this is what makes Anna Beer's latest book a total godsend. Sounds and Sweet Airs is an intoxicating historical examination of the way gender has shaped what we consider to be canonical... Beer’s impassioned overview delves into the hopes, motivations, and struggles each woman faced as she attempted to pursue her vocation while coping with the “boys club” mentality of their respective music communities.’

‘Books could be written about composers denied a place in the classical canon because of ethnicity or class or religion, but that doesn’t negate the truth and importance of Sounds and Sweet Airs’.

‘Beer’s snapshot lives of women composers are savvy, sympathetic... [an] essential and insightful study of a woman’s unsung place in the closed world of classical music.’

‘An engaging read and…contains a powerful and timely message’.

‘This is a truly inspiring and fascinating book... Female composers today no longer need to feel there is anything to stop them creating music and forging a career as a composer – if there is still any doubt, then just read Sounds and Sweet Airs.’

‘A rich, revealing study of the lives of eight outstanding female composers...Long overdue, this book includes a list of recommended listening for each composer, a glossary of musical terms, and suggestions for further reading.This important work furthers cultural understanding of the history of female composers.’

‘A fascinating and refreshing rescue of a few well-chosen exemplars from the worthy but dull hands of musicologists... Thrilling.’

‘Both feminist analyst and fluent biographer, Beer makes engrossing and cogent cases for her subjects. She concludes that the proof of their art lies in the hearing and recommends recent recordings.’

‘This book is a delight. Eight striking composers are reinstated in musical history, thanks to Anna Beer’s energetic research and lively writing.’

‘A fascinating glimpse into the world of the women whose music we should know and be hearing in the canon.’

– Charlotte Bray, winner of the Lili Boulanger Memorial Prize 2014 and composer of At the Speed of Stillness

‘Elegantly written, Sounds and Sweet Airs offers compelling evidence of the prejudices against women composers’ aspirations across the centuries.’

‘An important book... groundbreaking and entertaining... This book should be required reading not just for those interested in cultural history, but for anyone wishing to understand the perception of women in the modern era.’

‘Anna Beer’s eloquent and passionately argued narrative builds on the most up-to-date scholarship and makes an irresistible case for listening again to the work of women who were among the most admired musicians of their age. Much more than simply an attempt to balance the historical record, Sounds and Sweet Airs is essential reading for anyone who wants to understand music’s power and the politics of gender and sexuality that promoted, shaped and silenced women’s compositional careers from the Renaissance to the twentieth century.’

‘Absorbing ... [Beer] writes with rich detail and sympathetic insight about [these women's] ambitious, adventurous battles to overcome barriers to creativity.’

‘Serious students of music and women's history will want to add this title to their required reading lists.’