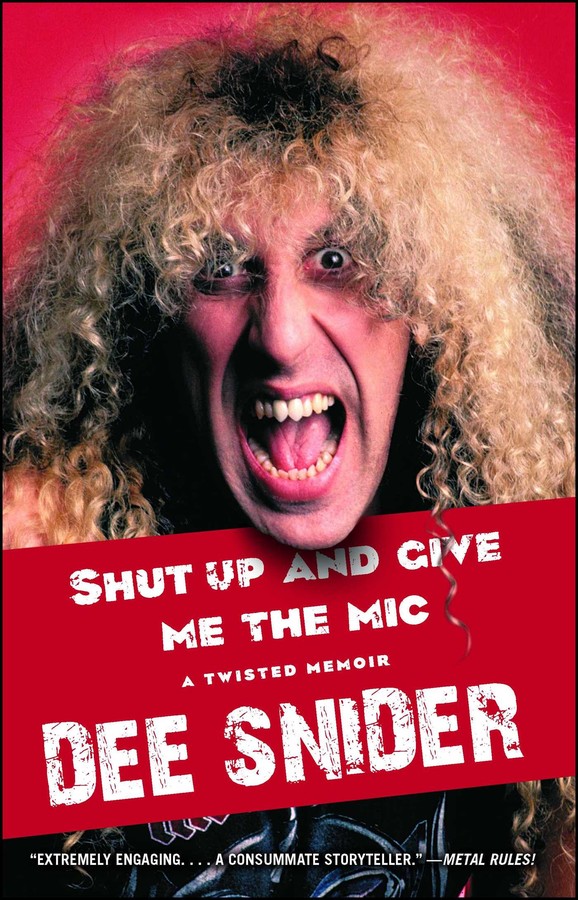 Shut Up and Give Me the Mic

By Dee Snider
LIST PRICE $13.99
PRICE MAY VARY BY RETAILER

DEE’S NOT GONNA TAKE IT

As lead singer and songwriter of Twisted Sister, Dee Snider became the poster boy for heavy metal, hair bands, and the wild side of rock. Now, in his twisted new memoir, he reveals the real stories behind the crazy makeup, the big hair, and badass hits like “We’re Not Gonna Take It” and “I Wanna Rock.”

A classically trained countertenor who sang with his high school choir, Dee remembers the day he decided he was “not gonna take it” and stopped caring what people thought about him. Following in the footsteps of his idols Alice Cooper and Black Sabbath, Dee jumped from band to band before meeting Jay Jay French and Twisted Sister. But it wasn’t until he met his costume-designing soul-mate Suzette that they developed his unique style. Dee’s hard work finally paid off with an impressive resume that includes: a monster hit record; smash MTV videos; a long-running radio show, “The House of Hair”; appearances in film (Pee Wee’s Big Adventure, Howard Stern’s Private Parts, StrangeLand) and television (Growing Up Twisted, Celebrity Apprentice); and a starring role in Broadway’s Rock of Ages. He even authored a teenage survival guide that was required reading in Russia!

In his journey from every parent’s worst teenage nightmare to Renaissance man, Dee avoided the usual pitfalls associated with rock stars. But that didn’t stop Tipper Gore and the Parents Music Resource Center from targeting him—a fight that led him to testify before Congress with Frank Zappa. He may have been slapped with a Parental Advisory warning label, but, through it all, Dee stayed positive and focused on being the best he could be.

Filled with entertaining anecdotes and candid confessions, Shut Up and Give Me the Mic takes you through the good times and bad with a heavy metal star who worked as hard as he played, and who did it all for his wife, four kids, and millions of “SMF” (Sick Mother F******) fans

This story is mine.

I’m the guy that gave it all to beat the odds, left everything he had on the stage each night, didn’t screw around on his woman, took care of his kids, and was sober enough to remember it all and write about it . . . myself.

The one thing that has surprised and confused me, though, is my unlikely transformation into a “beloved public figure.” How did the unpopular kid, who grew up to be the angry young man, who became the ’80s poster boy for the evils of rock ’n’ roll, arrested for profanity and assault, and boycotted by parents and religious groups, become the likeable mensch he is today?

Dee Snider is the lead singer and songwriter for the multiple-platinum-selling heavy metal band Twisted Sister. He is also a noted reality show star, radio personality, and voice-over talent, as well as a screenwriter and author of the book Dee Snider’s Teenage Survival Guide. He has been married to his wife, Suzette, since 1981. Visit Dee.Snider.com.

Shut Up and Give Me the Mic

By Dee Snider
LIST PRICE $13.99
PRICE MAY VARY BY RETAILER