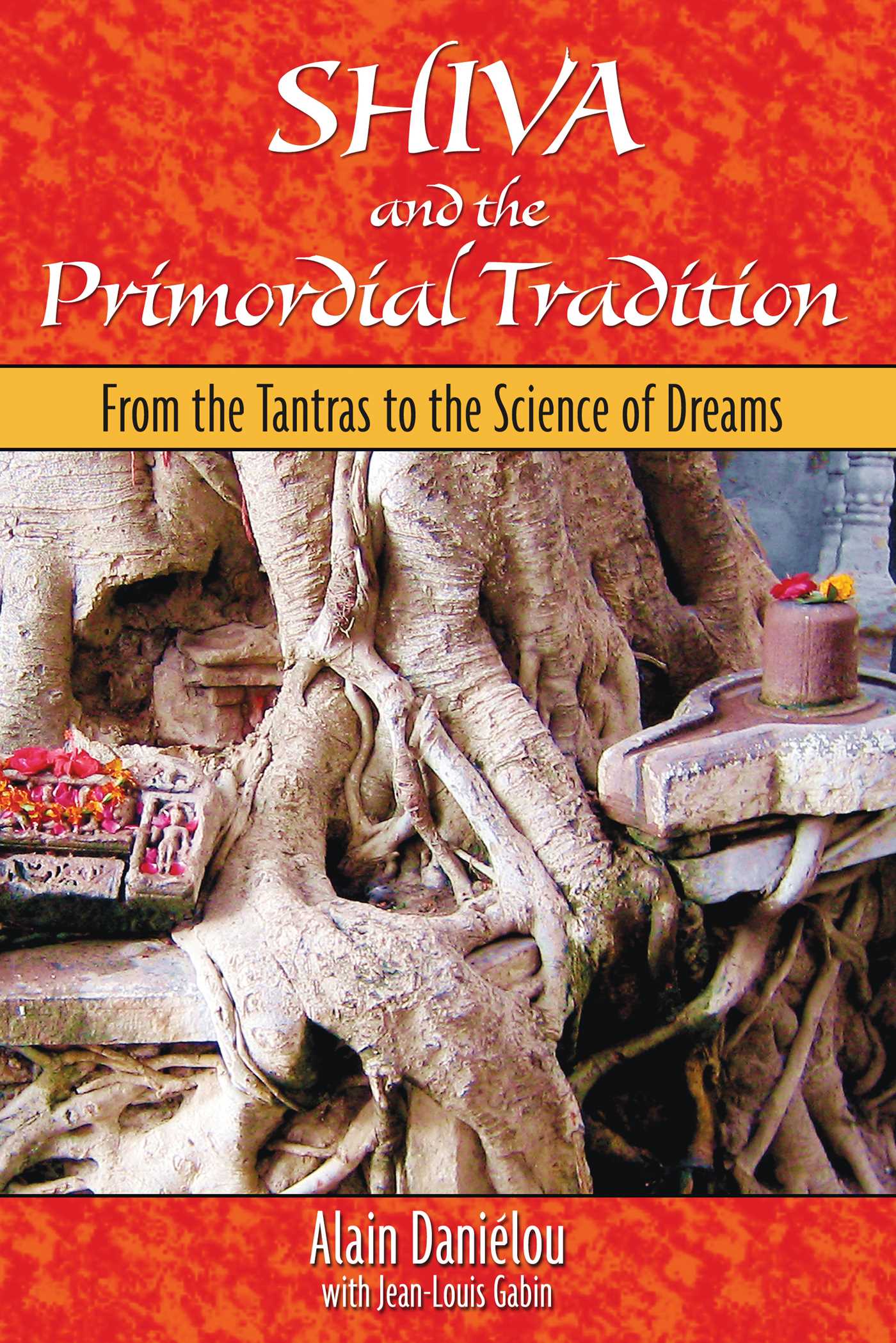 Shiva and the Primordial Tradition

From the Tantras to the Science of Dreams

An extensive examination of the underpinnings of the Shaivite Tradition

• Reveals the influence of Shaivism on the Western world

• Presents the connections between Vedic poetry and metaphysics

In Shiva and the Primordial Tradition, Alain Daniélou explores the relationship between Shaivism and the Western world. Shaivite philosophy does not oppose theology, cosmology, and science because it recognizes that their common aim is to seek to understand and explain the nature of the world. In the Western world, the idea of bridging the divide between science and religion is just beginning to touch the edges of mainstream thought.

This rare collection of the late author’s writings contains several never-before-published articles and offers an in-depth look at the many facets of the Samkhya, the cosmologic doctrines of the Shaivite tradition. Daniélou provides important revelations on subjects such as the science of dreams, the role of poetry and sexuality in the sacred, the personality of the great Shankara, and the Shaivite influence on the Scythians and the Parthians (and by extension, the Hellenic world in general). Providing a convincing argument in favor of the polytheistic approach, he explains that monotheism is merely the deification of individualism--the separation of humanity from nature--and that by acknowledging the sacred in everything, we can recognize the imprint of the primordial tradition.

The Secret of the Tantras

The double reality of the physical body and the subtle body merely expresses a particular aspect of cosmological reality. The basic structures of the universe and of the terrestrial world, like those of the human body, have a double aspect, the apparent (matter) and the real (subtle). The earth belongs to the solar system. Nothing can exist on earth that does not, on principle, exist in the solar world. Thus, there must be a solar consciousness, a solar intelligence, a solar life, or else where would these components in human beings have come from?

The solar world and terrestrial world must thus be represented in the same way as in the subtle person. In both cases, we shall encounter centers of energy, critical points at which are located the energies that determine life, consciousness, duration, physical or subtle perceptions of the earth as well as of human beings, and the transcendent powers that we call gods, who are manifest there.

This explains why certain places are sacred, certain regions privileged, a fact that has an impact on the characteristics of the human beings who live in such places. In the same way, certain areas of the human body are the seat of particular faculties. Sacred geography is superadded to the inner geography of the world and human beings. They are complementary, and in no way contradictory.

Any attempt at communication between states or levels of different beings, between humans, gods, and spirits of all kinds that our rudimentary senses cannot perceive, requires knowledge of the world’s subtle structures, which allows us to discover the openings, the secret passages through which we can communicate with other forms of being, other dimensions of space, time, and matter.

The search for this fundamental data that lies at the root of every aspect of the visible and invisible, inert or living worlds, is the only true science. It simultaneously implies both faultless logic and unprejudiced intuition. On the one hand, it includes supramental perception cultivated by the introspective methods of Yoga, allowing us to reactivate our non-mental knowledge potential, and on the other, an attentive observation of the signs, the parallel elements that we can discern in the most varied forms of manifestation, through which we can distinguish certain constants. In Hindu philosophy, this latter approach--which we may term cosmological--bears the name of Samkhya (numerable), “the observation of constants,” and is considered to be the indispensable complement of Yoga (union)--supramental perception, whose observations it controls and explains.

Once certain keys indicated by the constants and basic structural elements have been determined, we can utilize the fundamental energies that are the very basis of life to try to establish communication between the various states of being--the gods, spirits, the dead--beings that are not usually perceptible in the dimension that determines the barriers of our senses and the limits of apparent relative time, which depends on our perception of duration. This communication is established with the aid of three practical and interdependent methods called:

These three elements of the communication system between worlds are closely linked to one another and are inseparable in action. Such methods of magical action may appear absurd and irrational from the point of view of our habitual logic, but they are based on absolute realities, which only the most abstract aspects of modern science occasionally begin to point out for us.

The universe is divine thought, perceived as an apparent reality, but what is thought if not a ratio of forces? There is no thought without existence, no existence without a material support. Thought--matter--life form an indissoluble triangle. The language we use to try to grasp and communicate our thoughts is made up of a very limited number of symbolic elements, formed by roughly fifty articulated sounds, which we do our best to combine to give our ideas an approximate delimitation. Mantras pick up these basic elements, and yantras allow us to establish the corresponding geometric diagrams.

For any given world to exist, the conditions that make it possible must first exist. The first stage in any world is thus potential (avakasha). For the spatial world, such potential depends on the existence of space, which is one of the properties of a subtle element called ether (akasha). Space, however, has no dimension except in relation to an element of measurement, a vibration, a given wavelength. In humans, this vibration is called the “alpha” rhythm of the brain, which determines the duration, or dimension of time (kala).

For beings existing on a wavelength that is very different from our own, a second of their time may correspond to a thousand years of ours. Or, on the contrary, a second of our time may last centuries for them. In both cases, they can only be perceptible to us if we can escape from duration, from the limitations of our perception of time.

Vibration is a form of energy. The world’s substance can always be reduced to ratios of energy elements. Energy is the tension that exists between two opposing forces. In the spatial world, these two forces appear as a concentrating centripetal force that gives rise to energy coagulations, such as stars or atoms, and a dispersive centrifugal force that tends to dissolve and break up, to disperse and destroy a world in perpetual expansion.

Centripetal force corresponds to the protector principle called Vishnu, while the centrifugal force of the destroyer principle is called Shiva. It is this latter principle that triumphs in an atomic explosion.
Alain Daniélou

"Better known in Europe than in the U.S., the late French intellectual Daniélou (1907-1994) forged an eclectic career spanning several disciplines, though he is best known for his work on Indian music and culture. As a convert to the Hindu denomination known as Shaivism (which worships the god Shiva as the supreme being), Daniélou broke the rule of objectivity in his study of Hinduism, which has hurt his standing in academia. For the spiritual seeker, however, his work is immensely valuable in bridging the gap between polytheistic Hinduism and Western monotheism. One theme overarches: monotheism is the soul of error, both in the West, which has been "hardly interested in anything but philosophies infected by this germ," and in the East, where keepers of the "primordial" traditions have sought to ward it off. According to Daniélou, the healing power of Shaivism lies in opening oneself up to the divine spark in all things. More specifically, he shows how the disciplines of yoga and tantric sex, familiar to many in the West, derive from this ancient tradition and are doorways into a deeper and more fulfilling life. As is clear from this slight volume, Daniélou's Shaivic pluralism has much to say to our increasingly war-torn and materialistic culture and deserves a wide audience."

". . . this book as a whole, like all other works by Daniélou, commends itself for the author’s original insights into various aspects of Hindu culture and spirituality."

Shiva and the Primordial Tradition

From the Tantras to the Science of Dreams