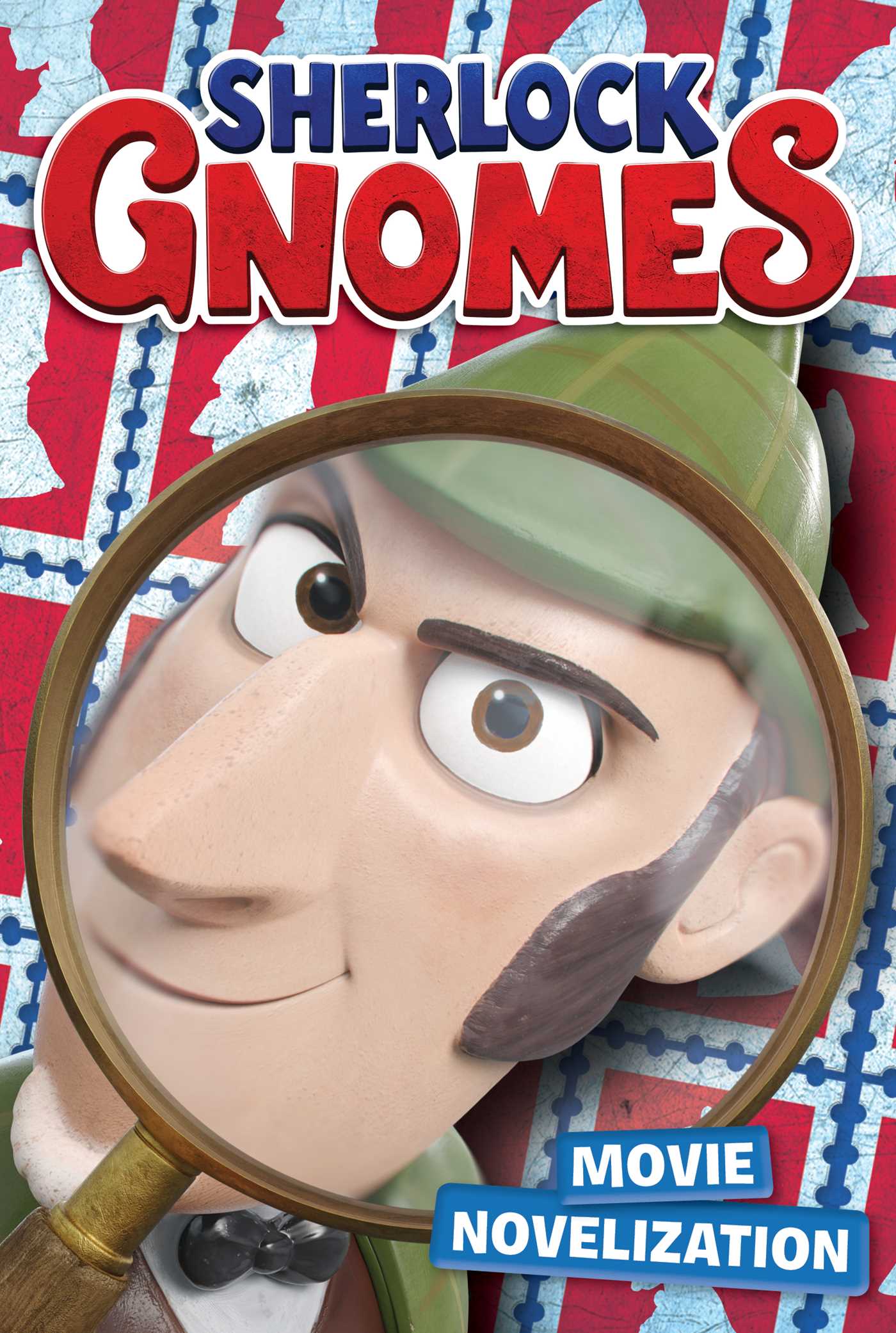 Garden gnomes Gnomeo & Juliet recruit renowned detective Sherlock Gnomes to investigate the mysterious disappearance of other garden ornaments in this movie novelization that’s based on the upcoming film, Sherlock Gnomes and features an eight-page color insert with images from the film!

When Gnomeo and Juliet notice that a bunch of garden ornaments have gone missing, they know there’s only one gnome to turn to: the brilliant detective Sherlock Gnomes! Despite his gruff personality, they know there is no one better to solve a mystery. Young fans of the film can relive the fun with this hilarious novelization!

Sherlock Gnomes Movie Novelization Chapter 1
On the busy streets of London, a car with a mattress strapped to its roof zoomed past redbrick buildings and bustling little shops. A U-Haul lurched behind it, skidding and sliding over the pavement.

Inside the U-Haul, cardboard boxes were stacked neatly on top of one another. As the truck rounded a sharp corner, a box was flung onto its side. The lid flipped open to reveal garden gnomes, stone rabbits, and other lawn ornaments tightly wrapped in Bubble Wrap.

Suddenly, as if by magic, a pretty young gnome with fearless brown eyes pushed her face out from under the Bubble Wrap. She wiggled over to another gnome with a scruff of beard and a tiny scar slashed through his eyebrow. “Gnomeo, isn’t this great? London! A new garden!” she exclaimed. Her red cap clinked gently against Gnomeo’s blue one.

It was a well-kept secret that when no human was looking, garden ornaments could come to life. Everyone could move about as they pleased—as long as they didn’t get caught.

“Juliet, you are so cute when you’re excited,” Gnomeo teased. He was so happy to be with the love of his life, moving to an exciting new city.

Juliet smiled. “Now, that’s more like it!” She gazed happily at Gnomeo. It was hard to believe that not long ago, she and Gnomeo’s families had been bitter enemies.

For years, there had been a terrible feud between two old neighbors, Ms. Montague and Mr. Capulet. Neither remembered how it started, but once it did, even their gardens took part. Juliet’s father, Lord Redbrick, commanded Mr. Capulet’s garden full of red-capped gnomes. Lady Bluebury, Gnomeo’s mother, was in charge of Ms. Montague’s garden, and the blue-hatted gnomes inside it.

When Gnomeo met Juliet, it was love at first sight. But it was a dangerous thing, for a blue to love a red. Lord Redbrick and Lady Bluebury’s mutual loathing had led to the destruction of both gnome gardens and had nearly cost Gnomeo and Juliet their lives.

And now, they were on their way to a new home, a new garden, and a new life! Gnomeo closed his eyes as he leaned in to kiss Juliet.

Suddenly the U-Haul hit a speed bump. Gnomeo opened his eyes to find a tiny gnome grinning at him. His blue hat had been sheared off at the base. “Wow, that was unexpected,” said the tiny gnome.

Gnomeo slapped his forehead. He had just kissed his best friend, Benny!

“I can see why she likes you!” Benny turned and looked expectantly at Juliet’s maid, Nanette, a porcelain frog with wide pink lips.

Nanette shook her head over and over. And then she shook it some more. “I’m giving you a subtle look that says, ‘absolutely no way,’ ” she warned Benny.

The U-Haul took another turn and suddenly the gnomes were rattling over a cobblestone street.

“It seems we’re going through some unexpected bumpulance, so, everyone, hold on to their Bubble Wrap!” called Lord Redbrick.

“Listen to Lord Redbrick,” advised Lady Bluebury. “Whatever you do, however tempting it may be, do not pop your Bubble Wrap.”

Benny held a bubble between his fingers. Then he popped it. “I can’t help it. It’s a syndrome.”

As the U-Haul jostled the gnomes, Lord Redbrick turned to Lady Bluebury. “I hope this place has a proper garden. You know how city gardens can be.”

“Guys, why don’t we all picture our dream garden?” suggested a gnome with daisies painted over his green smock. He pushed up his oversize glasses. “And then that’s just what it’ll be!”

Everyone stared at Paris.

Paris blinked twice, pushed his glasses up even farther, and coughed. “I’m pretty sure that’s how life works.”

“You know what I want?” Nanette asked dreamily. “I want a massive infinity pool.”

“And an even bigger box than this!” exclaimed a tough-looking doe ornament named Fawn. Pulling free of his Bubble Wrap, he used his hooves to shove down three tiny gnomes with red hats draped over their eyes. “Move, goons!” he growled, trying to make more room for himself.

As he spoke, the U-Haul slowed to a stop.

Gnomeo took Juliet’s hands in his. “You ready?”

Juliet squeezed as hard as she could. “Can’t wait.”

“Poses, everyone!” shouted Lord Redbrick. All the gnomes and lawn ornaments froze in place.

Gnomeo and Juliet stood as still as they could. The van doors opened and a pair of hands picked up their cardboard box. They held their breath as they waited to see what their new garden home had in store for them.