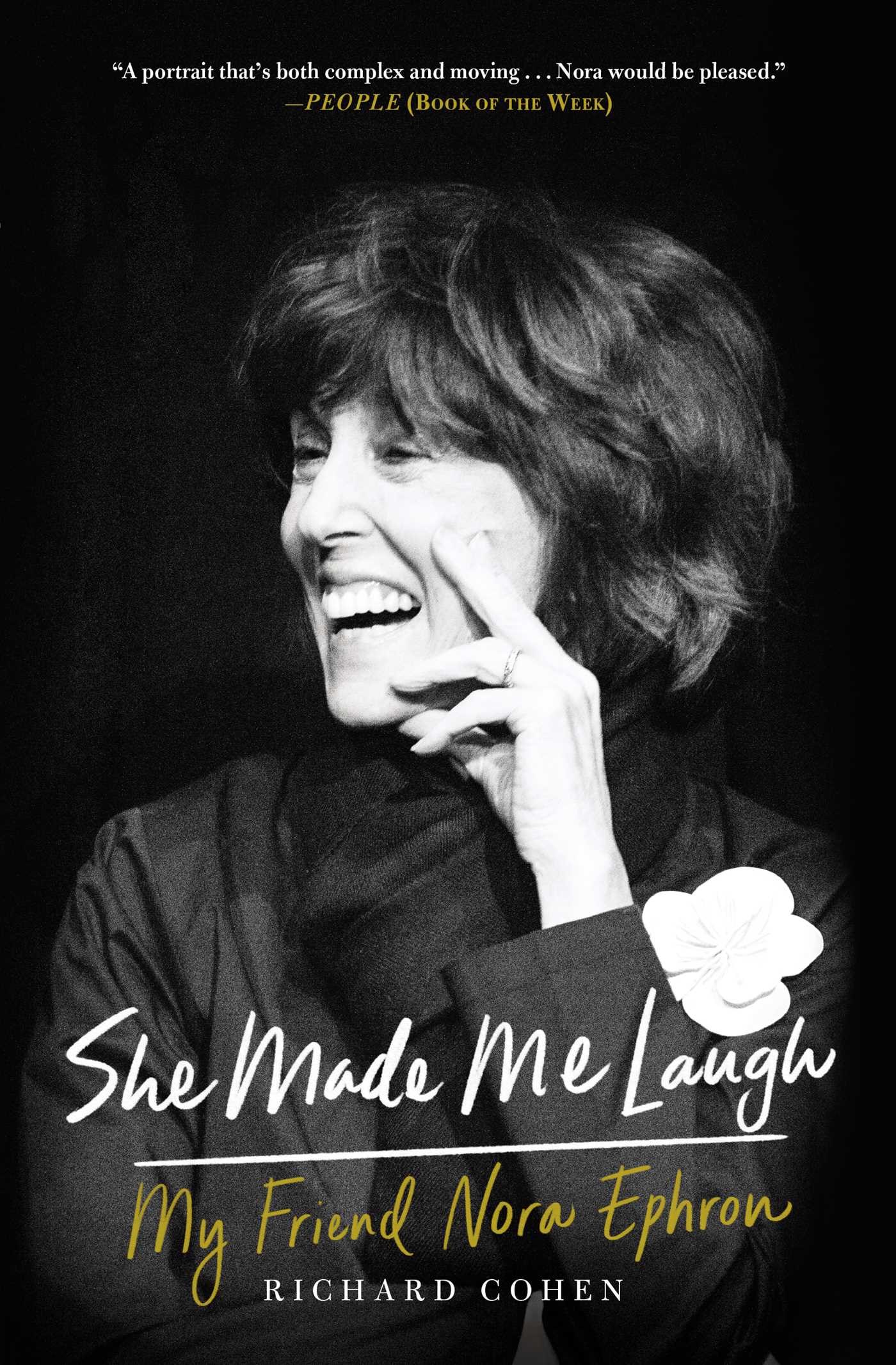 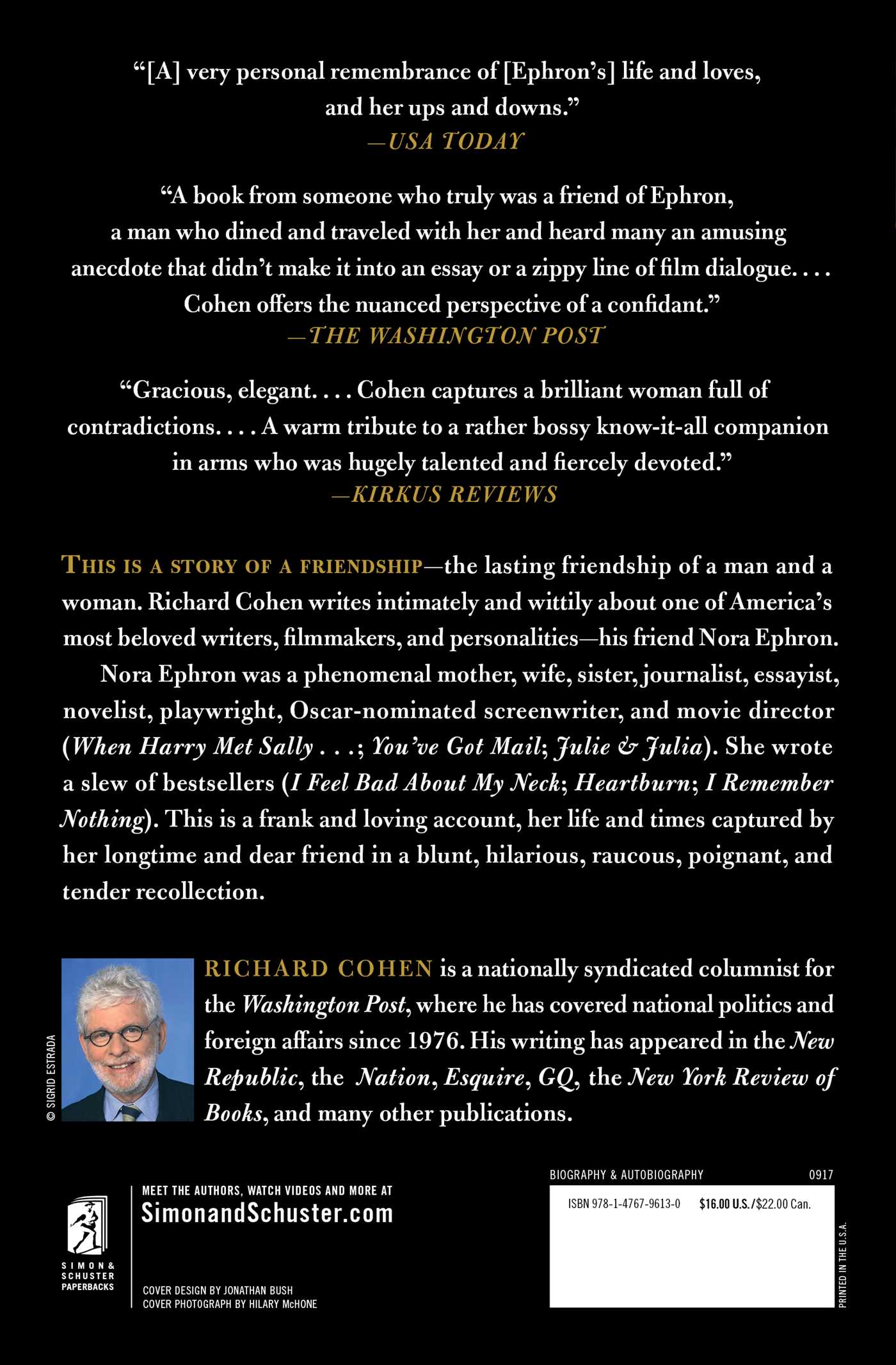 By Richard Cohen
LIST PRICE $16.00
PRICE MAY VARY BY RETAILER

“A very personal remembrance of Nora Ephron’s life and loves, and her ups and downs” (USA TODAY) by her long-time and dear friend Richard Cohen in a hilarious, blunt, raucous, and poignant recollection of their decades-long friendship.

Nora Ephron (1941–2012) was a phenomenal personality, journalist, essayist, novelist, playwright, Oscar-nominated screenwriter, and movie director (Sleepless in Seattle; You’ve Got Mail; When Harry Met Sally; Heartburn; Julie & Julia). She wrote a slew of bestsellers (I Feel Bad About My Neck: And Other Thoughts on Being a Woman; I Remember Nothing: And Other Reflections; Scribble, Scribble: Notes on the Media; Crazy Salad: Some Things About Women). She was celebrated by Hollywood, embraced by literary New York, and adored by legions of fans throughout the world.

Award-winning journalist Richard Cohen, wrote this about She Made Me Laugh: “I call this book a third-person memoir. It is about my closest friend, Nora Ephron, and the lives we lived together and how her life got to be bigger until, finally, she wrote her last work, the play, Lucky Guy, about a newspaper columnist dying of cancer while she herself was dying of cancer. I have interviewed many of her other friends—Mike Nichols, Tom Hanks, Steven Spielberg, Meryl Streep, Arianna Huffington—but the book is not a name-dropping star turn, but an attempt to capture a remarkable woman who meant so much to so many other women.”

With “the nuanced perspective of a confidant” (The Washington Post), She Made Me Laugh “is a fine tribute to a fascinating woman” (Houston Chronicle): “Nora would be pleased” (People, “Book of the Week”).

She Made Me Laugh Room 242
As she went in and out of consciousness, she was typically observing the process. “In out, in out,” she said. “So it’s happening.” The room, 242 of New York Hospital, faced south, so if she raised her head she could see down the East River and, over a bit to the west, the skyline of midtown Manhattan. This was her city. She had come from the West to claim it, to make it her own, to know its writers and actors and politicians, but especially the writers because she was one herself, her fame as a director notwithstanding.

People drifted in and out of the room. Husband. Children. Friends. Relatives. Her dying was taking longer than expected. She had acute myeloid leukemia and it had devolved into the inevitable and unavoidable pneumonia, and so the end was coming, although it was taking its own sweet time. She was awake and then asleep. Sometimes alert. Sometimes not. She lost track of time, once asking in late afternoon to watch an early morning TV show, Morning Joe. Outside, the river reversed course as estuaries do, sometimes going north, sometimes going south. It seemed apt.

Calls were being made. The famous, the somewhat less famous; the talented, the brilliant; the immensely rich, the merely rich, the non-rich; the established writers, the young writers; the struggling young actors, the struggling older actors; Hollywood, New York, East Hampton, Paris, London, and the African American neighborhood of distant Riverhead on Long Island where she had put her longtime maid’s daughter through college.

A summoning was in process, a call to assemble for a memorial service. There would be no funeral, no imprecations to a god she did not believe existed. (She was mystified that anyone could believe otherwise, and she abhorred the senseless platitude that “everything happens for a reason.”) So a call went out to various halls—the Ethical Culture School on Manhattan’s Upper West Side and the Council on Foreign Relations on the Upper East Side. Too small. They were all too small. Slowly, it became apparent that a larger hall would have to be secured, something with about a thousand seats. Word of her impending death was spreading, and you could feel a stirring, a deep pain, a tsunami of bereavement that was building and building and which now seems appropriate but at the time was a surprise.

I sat on the bed and talked to her. I told her how much she was loved, about all the love in the room. She raised herself and looked out the window, south to the skyline. She extended her left arm and scooped Manhattan into her. “And out there,” she said.

So she could feel it. It didn’t surprise her as much as it did the rest of us. Still, she was a writer, and writers do not have the deaths of celebrities—the kitschy mourning of strangers, the sad bodega flowers, TV tears, and then the sign-off from the anchor, “She will be missed.” Writers just slip away. They get an obit in the Times, maybe, and then a small gathering in some dreary West Side apartment, and then, with any luck or some pull and the proper ethnic bona fides, interment in the weathered cemeteries of the Hamptons. Nora would have scoffed at that, anyway—the last-minute lunge toward religion. It was always dangerous to die while Nora was alive. She had things to say.

Out there, past her outstretched arm, something was happening. There was a movement, a swelling, a something in the zeitgeist—a rolling groan of impending misery. She could feel it and she did not scoff at it because it was real and genuine. She had it coming, she seemed to feel. She had earned it.

But the rest of us were somehow, maybe inexplicably, amazed. Her family, her friends, the doctors chosen by her and thus credentialed as both brilliant and famous—all felt it. And were stunned. Yes, she was sort of famous and she had directed movies, written acclaimed screenplays and best sellers, and even had plays both on and off Broadway and another show in the works. There had been hints. Her books sold really well. And when she made an appearance, throngs materialized. We who knew her, we who had been her friends, we who loved her (not always or all the time), we who still hear her voice on the phone—“Hello, it’s Nora.”—were too close to see what was happening.

The sorrow came through the window, up off the East River, and it had a power. Afterward, some young person wrote a tribute to her in the Washington Post. His name was James McCauley. He had known her. She had made time for him while he was at Harvard and had stayed in touch after he went to work as an intern on the editorial staff of the Post. I was her friend. I was a longtime Washington Post columnist. I knew nothing about the young man.

There was an item in the newspaper about Nora and the writer Nathan Englander. He had written a short story about Stalin’s murder of the Soviet Union’s most acclaimed Yiddish writers. It was called “The 27th Man,” and it was contained in a collection that Nora had read. The item said that Nora had gotten in touch with Englander and arranged a breakfast at Barney Greengrass, the famous West Side deli. She told him his story could be a play. She told him she would help him. From then on, they met from time to time. The play opened at the Public Theater in December of 2012. Nora had died in June.

I was stunned by the newspaper item. Yiddish writers? Nora could hardly have cared less. A writer on Jewish themes? Not my darling Nora. She once sat through one of my Passover Seders like a traveler marooned in a train station. She abhorred religion. She abhorred my sanctimonious Judaism, erratically and idiosyncratically practiced in delayed homage to the Holocaust. But here she was helping to write a play about Yiddish writers. And she had said nothing to me about the project—me who consumed Jewish history and was, even then, writing a book about Jews and Israel.

I emailed Englander. I confessed mystification. “I know you’re busy, but I’d like to meet you and also get to know Nora better,” I wrote. “I’d even go to Brooklyn.”

We met for lunch. I wanted to know more. I wanted to know the Nora he knew. The Nora the kid at the Post knew. The Nora whom others were writing about, notably Lena Dunham. Some of these people turned to me to ask similar questions. I had the answers, they thought. I was her friend, her best friend she had told others, and I knew her better than anyone. Whether that was true I still don’t know, but I do know that she knew me better than anyone—including, I’m sure she would add, myself. 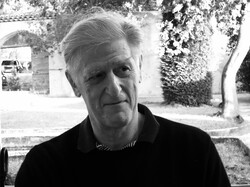 Photograph by Christopher Dickey
Richard Cohen
Richard Cohen is the former publishing director of Hutchinson and Hodder & Stoughton and the author of Chasing the Sun, By the Sword, and How To Write Like Tolstoy. Works he has edited have gone on to win the Pulitzer, Booker and Whitbread/Costa prizes, and twenty-one have been #1 bestsellers. For more than 35 years he has written, edited, and lectured on numerous subjects around the world, from talks on the Queen Mary 2 to the First World War battlefields of France and Belgium. For seven years he was a visiting professor in creative writing at the university of Kingston-upon-Thames in London. Among the authors he has edited are Madeleine Albright, Vanessa Redgrave, Sebastian Faulks, Studs Terkel, John Keegan, Richard Holmes, John le Carre, Jeffrey Archer, Sir Harold Evans, Tony Benn, Barbara Castle, William Trevor, Kingsley Amis and Fay Weldon. He is a Fellow of the Royal Society of Literature.

By Richard Cohen
LIST PRICE $16.00
PRICE MAY VARY BY RETAILER