By Stephen Pearcy and Sam Benjamin
LIST PRICE $12.99
PRICE MAY VARY BY RETAILER

A jaw-dropping tell-all from the lead singer of the 1980s supergroup Ratt: the groupies, the trashed hotel rooms, the drugs—and just how much you can get away with when you’re one of the biggest hair metal stars of all time.

Women. Spandex. Drugs. Hair spray...Welcome to heavy metal rock ’n’ roll, circa 1980, when all you needed was the right look, burning ambition, and a chance. Stephen Pearcy and supergroup Ratt hit the bull’s-eye. What they did with their fame and fortune is a riotous tale of...

Pearcy was a scrawny, horny, thrill-seeking teenager with an electric guitar who had graduated from backyard parties in San Diego to half-empty dives in Los Angeles before he and his band broke through at Whiskey a Go Go. Cranking out metal just as metal got hot, Ratt was the perfect band at the perfect time, and their hit single “Round and Round” became a top-selling anthem. The bigger Ratt got, the more excessive Pearcy and his “pussy pirates” became. There was nothing these guys wouldn’t snort, drink, bed, or break. And the fans were just as bad, as husbands and mothers offered up nubile wives and daughters as tribute to their rock ’n’ roll idols.

On a journey that could happen only in America, Pearcy met everyone from Michael Jackson to Drew Barrymore (at age twelve, at a New York nightclub, at 2 a.m.) to Rodney Dangerfield. His infamous partner-in-crime, Ratt guitarist Robbin Crosby, a blond Viking with an unsurpassed appetite for drugs and women, cuts a towering and tragic figure throughout.

As Ratt scrambled up a wall of fame and wealth, so they experienced the gut-wrenching free fall, after too many hours in buses, planes, and limos; too many women; too many drugs; and all the personality clashes and ego trips that marked the beginning of the end. Pearcy offers a stunningly honest selfportrait of a man running on the fumes of ambition and loneliness as the party crashed. His rock ’n’ roll confessional, by turns incredible, hilarious, and lyrical, is a story of survival—and a search for the things that matter most.

Sex, Drugs, Ratt & Roll YOU’RE TALKIN’ TO ME
IN 2009, I PACKED myself off to rehab in Pasadena, California, in an attempt to wean myself from that nagging booze/pills/grass/heroin habit I’d picked up over the last several decades. There was an initial period of hell, better known as withdrawal, followed by a long stretch of a much more annoying kind of torture: therapy.

It’s the price of getting clean, I guess. They help you ditch the drugs, make it so your bandmates no longer have to stick mirrors underneath your nostrils to see if you’re still alive when you go into one of your increasingly frequent nods in the recording studio—and then you have to sort of humor them when they say, What else about you can we clean up?

I was assigned a decent, flabby therapist named Dr. Harold Roberts, who had the nerve to imply that I might have a few other addictions to my name, too.

“What I’d like to ask you, Stephen, is, have you ever considered yourself a sex addict?”

I laughed. “How would I even know?”

“A sex addict might, for instance, spend the majority of his waking hours trying to procure sex.”

“I’m a rock singer,” I said. “If you have to try to get laid, then there’s definitely something wrong.”

“Did you ever have a period of your life when you went from partner to partner, without due regard for their personalities?”

“Okay.” Dr. Roberts laughed. “All right. Humor can be a defense mechanism. How many partners might you have had?” He said it casually, but I could see his interest was growing.

“My stamina in the mid-’80s was unparalleled,” I began. “I was tearing down three chicks a day when we were on the road, under ideal conditions.”

“Three? But I don’t even see how that’s possible.”

They were well-trained and faithful soldiers—Phil, Joe, and Road Dog—each one ready to scout the hottest trim around and slap passes in those girls’ hands. They’d continue throughout our show, scanning the audience, knowing my type perfectly. After the encore, there would be twenty-five giggling blondes lined up, all incredible tits, flat stomachs, and golden asses. I just had to pick.

“Now,” I continued, “if you want to throw down on tour, you have to learn how to do it right. You space out the trim—one before the show in your dressing room, one midshow, during the drum solo, and then obviously, one at the hotel that night.”

A momentary silence filled the room.

The doctor was writing something down in his notebook.

“But you must stay organized. For instance, always make sure to take a Polaroid of each of your girls. Write her phone number on the back with a Sharpie. Then hand that off to your security guy to stick in his Rolodex, so that you have it for next time you come through Jacksonville or Corpus Christi.”

“Mr. Pearcy, this is compulsive behavior, don’t you agree?”

“No, it’s smart behavior. I grew up with this, man. I was at Van Halen shows for a long time before my band broke, and I knew the best bands had their systems down. I always told my guys when we got big, we’d do it right.”

The doctor and I stared at each other for a while. It was nice and quiet in that office. You pay through the nose if you go to rehab, at least if you go to some of the posher places. The one I went to, embarrassingly, is the place where Dr. Drew filmed his celebrity rehab show. I liked the cleanliness and general high production value of the whole place, though.

“Back in the day, I used my itineraries to keep track of every single chick I ever met or put myself into. I kept them my whole adult life. Had stacks and stacks and stacks of them. They got burned by my super-pissed girlfriends. I’d just write the girl’s name, her phone number, the city I met her in, and a rating. You know, seven, eight, maybe a nine. Once in a while, a true ten. And if we had sex, I’d mark it with three x’s. And if we did something else, I’d write that. Then I’d try to add some sort of signature description, like ‘see again.’ Or ‘fly out.’ Or ‘kinda funky.’ ”

“Do you have anything else that you want to tell me, Stephen?” Dr. Roberts said. “Anything that you’d like to get off your chest?”

Where do I start?
Stephen Pearcy

Stephen Pearcy, founder, lead singer and songwriter of the popular rock band Ratt, led his band to critical praise and multi-platinum success. Formed in Los Angeles in 1982 from the remains of his band Mickey Ratt, Ratt was known for their flamboyant appearance and rebellious attitude. Pearcy currently lives in Los Angeles. 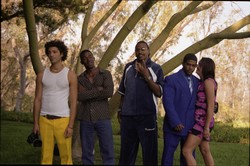 By Stephen Pearcy and Sam Benjamin
LIST PRICE $12.99
PRICE MAY VARY BY RETAILER