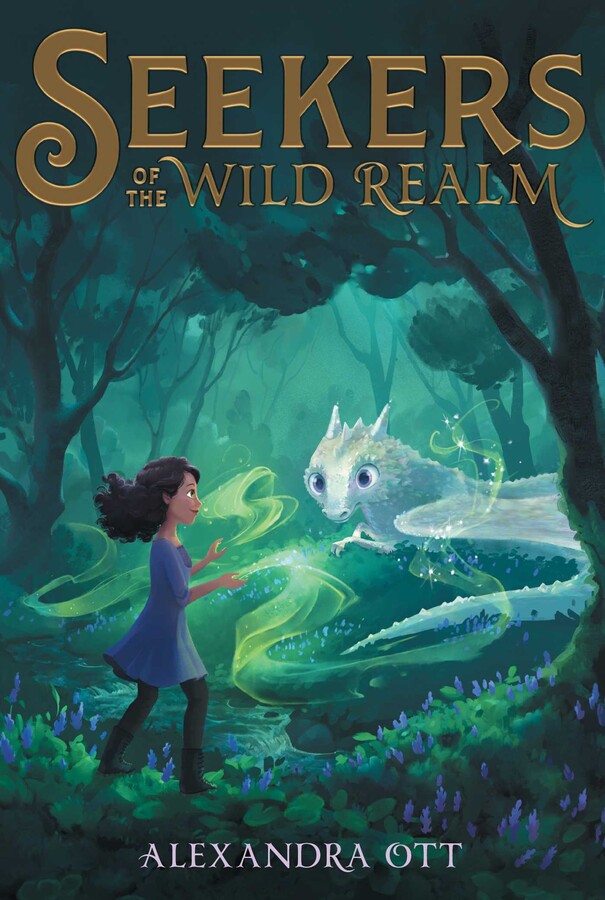 Seekers of the Wild Realm

Book #1 of Seekers of the Wild Realm
By Alexandra Ott
LIST PRICE $10.99
PRICE MAY VARY BY RETAILER

Fablehaven meets How to Train Your Dragon in this action-packed fantasy about a young boy and girl who become reluctant allies when caring for a baby dragon—the first in brand-new duology!

Twelve-year-old Bryn has always dreamed of becoming a Seeker, just like her dad. Only the Seekers are allowed to journey from their small village into the fantastical, untamed wilderness of their island known as the Wild Realm. Once there, they obtain magical items for the village and use magic to protect and heal the incredible creatures native to the Realm.

When one of the elderly Seekers retires, leaving a vacant position, Bryn knows this may be her chance. There’s just one problem: Only boys have ever been Seekers. And the training master makes it clear he will not be training a girl.

But then Bryn’s biggest rival for the Seeker position, a boy named Ari, shows up at her door. He reveals the baby dragon he’s been hiding, and the two strike a deal—if Bryn helps care for the dragon, Ari will share all his training with her.

Even as the two bond over their love of magical animals and their secret trips into the Wild Realm, Bryn doesn’t completely trust Ari’s motives. Especially as she suspects Ari may know more than he’s letting on about the enemy clan stirring up unrest in their village.

When all these secrets come to a head and the stakes are at their highest, Bryn realizes it’s up to her to save her family…and the Realm.

Alexandra Ott holds a BA in English from the University of Tulsa. She currently lives in Oklahoma with her tiny canine overlord. She is the author of the Rules for Thieves and Seekers of the Wild Realm series. Visit her online at AlexandraOtt.com and on Twitter at @Alexandra_Ott.

Twelve-year-old Brynja lives in a small island town near the Wild Realm, which is home to a variety of magical plants and animals. Five Seekers serve as guardians of the Realm, maintaining the balance within it. Bryn wants to be a Seeker more than anything else in the world, both because she loves the creatures of the Realm and because the Realm will give her access to magical plants that can help her sickly little sister. However, only boys have ever become Seekers. Thus, when a Seeker retires and competitions are held to choose the next Seeker, Bryn is not allowed to train with the other competitors. Nonetheless, Bryn is eager to change how things have always been, and when Ari—her biggest rival—offers to train her in exchange for her help looking after a baby dragon, she cannot bring herself to refuse. In both setting and rendering of creatures, readers will find similarities to such big-screen properties as the How To Train Your Dragon series, though the plot is original if ultimately predictable. This island society is not racialized—all the human inhabitants have "light-brown skin" and "raven-black hair"—and the book's primary focus is on gender inequalities faced by women. The ending is not completely smooth, but Ott's fast-paced fantasy highlights the importance of persistence, especially with regard to changing society's (rather set) ways. An immersive and fun—if predictable—series opener. (Fantasy. 8-12)

Twelve-year-old Bryn is determined to become a Seeker like her father before her. She knows that she would be the first woman to take on the role of explorer and protector of the magical Wild Realm, but she doesn’t realize just how much resistance her set-in-its-ways community would have towards a female earning that title. When Bryn, considered too delicate, isn’t allowed to train for the competition, she is furious until Ari, a quiet fellow competitor, offers to pass along the training to her in exchange for help caring for a young dragon that he has secretly squirreled away. Bryn hesitantly agrees, and the real adventure begins. It’s a thrill to explore Ott’s magical kingdom, and it’s a particular delight to watch all of the relationships develop between the main characters; whether familial or friendly, they feel incredibly warm and true. Though its final revelations won’t come as much of a surprise, this well-executed story offers a wonderfully imaginative world for young fantasy fans to dive into.

Twelve-year-old Bryn’s greatest dream is to follow in her father’s footsteps as one of her village’s five Seekers, those responsible for protecting the Wild Realm—a magical region covering the far reaches of their island. That way, she can see the Realm’s marvels and retrieve the rare flowers that alleviate her younger sister’s coughing fits. When the Seekers announce a competition to replace a retiring member, Bryn is sure she has a shot, but no girl has ever held the position, and she’s swiftly prohibited from training. Ari, another competitor, comes to her with a bargain: if she helps him take care of the baby dragon he hatched, he’ll help her train. Even though only one can be Seeker, they soon become fast friends, which helps when the competition takes an unexpectedly dangerous turn. With this engaging series opener, Ott (Rules for Thieves) uses her fantastical setting to challenge the idea of restrictive gender roles—not only does Bryn wish to become the first female Seeker, Ari, an empath, is looked down upon by those with more physical talents. Sympathetic characters, clear stakes, and an interesting social structure offer layers to this enjoyable fantasy. Ages 8–12. Agent: Victoria Doherty Munro, Writers House. (July)

Seekers of the Wild Realm

Book #1 of Seekers of the Wild Realm
By Alexandra Ott
LIST PRICE $10.99
PRICE MAY VARY BY RETAILER