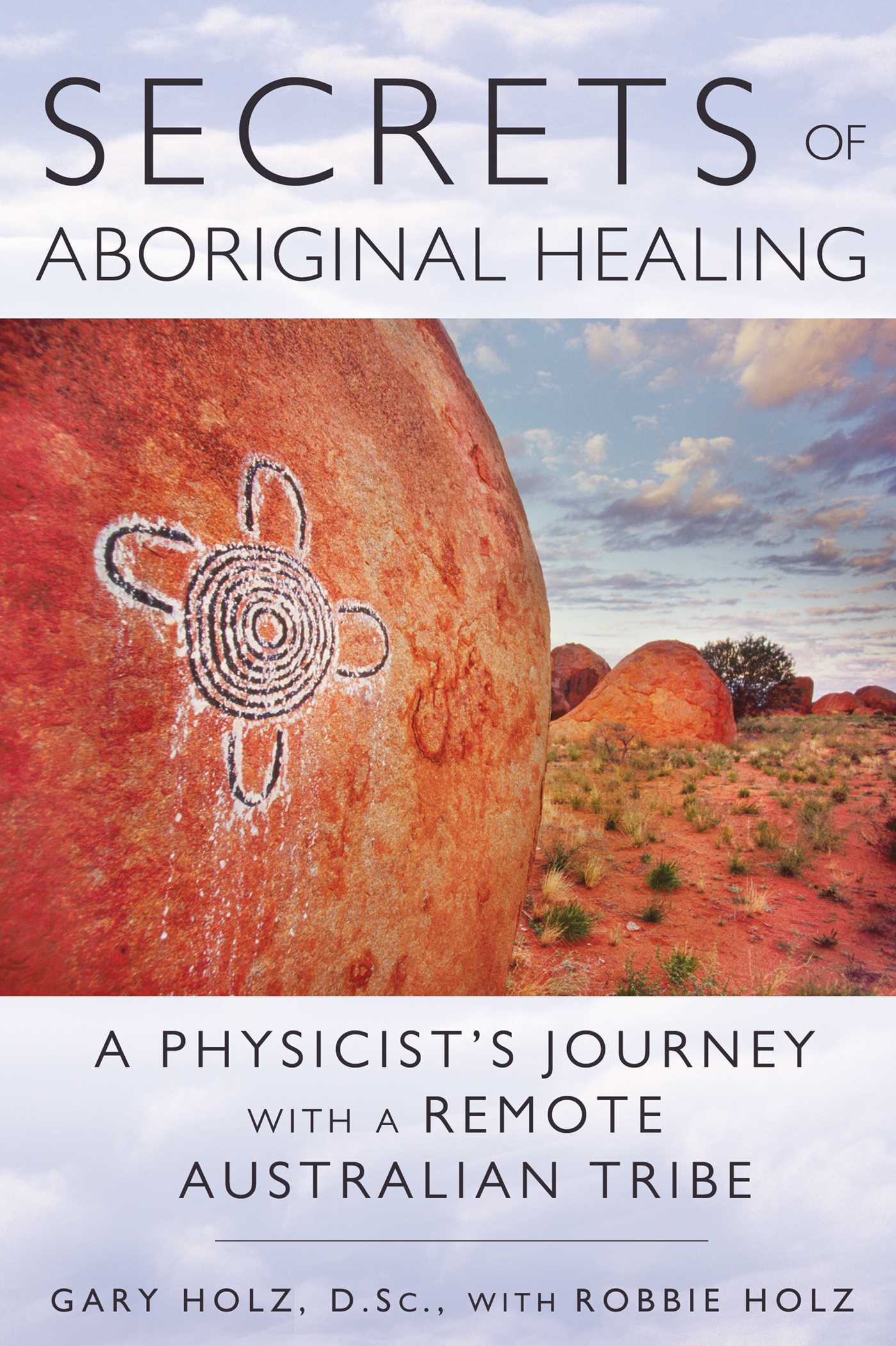 By Gary Holz
With Robbie Holz
LIST PRICE $7.99
PRICE MAY VARY BY RETAILER

A guide to the 60,000-year-old healing system of the Aborigines revealed through one man’s journey to overcome multiple sclerosis

• Explores the use of dreamtime, spirit guides, and telepathy to discover and reprogram the subconscious motivations, thought patterns, and beliefs behind illness

In 1983 award-winning physicist Gary Holz was diagnosed with chronic progressive multiple sclerosis. By 1988 he was a quadriplegic. Then, in 1994, his doctors told him he had two years to live. Desperate and depressed, he followed a synchronistic suggestion and went to Australia to live with a remote Aboriginal tribe. Arriving in a wheelchair, alone, with almost no feeling left from the neck down, Holz embarked on a remarkable healing transformation of body, mind, and spirit and discovered his own gift for healing others.

Written at the request of the Aboriginal healers Holz worked with, this book reveals the beliefs and principles of the 60,000-year-old healing system of the Aborigines of Australia, the world’s oldest continuous culture. Chronicling the step-by-step process that led to his miraculous recovery, he explains the role played by thought in the creation of health or disease and details the five essential steps in the Aboriginal healing process. He explores the use of dreamtime, spirit guides, and telepathy to discover and reprogram the subconscious motivations behind illness--a process that enacts healing at the cellular and the soul level, where the root of physical illness is found.

Supported by modern science, including quantum physics, Aboriginal medicine enables each of us to tap in to healing support through the power of the body/mind/spirit connection.

According to my doctors, I was not supposed to be alive today. But I am. My healing was not accomplished through modern medicine, with wonder drugs and technologies. No. For me the healing began on the other side of the world in the Australian Outback, with ways that are as ancient as the human race itself.

My journey began with a single step--a step I took on my way to yet another business meeting. My left foot didn’t lift properly, it was dragging a little as I walked. But my life had enough problems. I told myself I must have strained a muscle. The next day my foot was normal and I forgot about it.

But the “dragging” returned. The scuff marks across the top of my shoe proved I wasn’t imagining the weakness in my left foot or the tingling numbness. It was real. Too real. I decided I had pinched a nerve in my foot that would disappear in time.

My high-tech aerospace company was growing rapidly and demanding most of my time and attention. I had no time for symptoms, for pinched nerves, for any distraction. So I bought a cane at a local drug store. I would have continued living this way indefinitely if I hadn’t awoke one morning and discovered that the numb feeling now had spread to my groin area. It was taking over my sense of maleness. Using a cane was one thing, but this was something altogether different. That day I called to arrange for tests at Scripps Clinic in La Jolla, California.

What happened next knocked the wind out of me.

“At this point the most educated guess says you are suffering from chronic progressive MS--multiple sclerosis.” I was speechless. All I could do was cling to the words “educated guess.” Maybe the doctor was wrong. He had admitted that multiple sclerosis was difficult to diagnose. I could be suffering from stress. My first marriage had ended in divorce, my second marriage was rapidly heading for the same, my children were cold and distant, and there was the pressure of running my business. That was it, I was certain. I just needed some rest.

As my mind continued to marshal its arguments, the doctor continued. “We can give you medication that will ease the pain. Unfortunately, there is no known cause for multiple sclerosis, and therefore we have no cure.”

Those two words stopped the chatter of my mind and began to repeat like a broken record. No cure. No cure. The doctor droned on in a voice so flat he could have been lecturing to a classroom of bored medical students.

There would be periods when I would experience an increase in pain and symptoms--an “exacerbation.” The symptoms would decline in intensity with time, but there would sometimes be a permanent result such as numbness.

Then in a slightly softer voice--as if he finally remembered he was talking to the patient, the one for whom there was “no cure”--he added, “I know it’s no comfort but the reality is, we simply don’t know how this will affect your life. The course of the disease varies from person to person. It’s impossible to know what course yours will take or how severe it will become.”

I seemed to be outside myself, watching the entire scene from someplace else--someplace safe. Where was my reaction to this news? I should have been horrified. But somehow, no emotions came. I felt no fear, no anger, no self‑pity, no sorrow. I felt nothing. Just emptiness.

The next seven years of my life were a nightmare.

For four years I continued dragging myself around airports and boardrooms, forcing myself to “walk” on two canes because I was afraid that once I got into a wheelchair I’d never get out again. Finally, in 1988, I gave in. I got a chair. That was also the year that I began taking a liter of Prednisone a day through an IV. I thought things couldn’t get much worse.

But they did. In 1994 my doctor told me I was losing the battle. My internal organs were shutting down. I should begin to get my affairs in order. I had two years to live--at most.

Two years. I was forty-three years old. By then I was spending most of my time in a wheelchair, had almost no feeling in my body, was catheterized, and could barely lift my arms to feed myself. Even so, I knew I was not ready to die. There was still so much that I wanted to experience. My desperation was deep and black, and I felt totally alone.

And then a series of what I would have called strange coincidences occurred.

Seeking relief from the unrelenting depression, I stopped in at a local jazz club. I happened to encounter a naturopath from Australia who happened to know some extraordinary healers in an Aboriginal tribe in the Australian Outback. She happened to have the phone number of one, Ray Gelar, which she gave to me.

That was all strange enough, but even stranger was the strong urge I had to call him. It was completely out of character for me, but I did it. I called Ray. I asked him if he could help me.

A week later this man--who had devoted his life to physics, to logic, to hard cold facts--rolled his wheelchair onto a plane bound for Australia. Part of me thought I was insane. But another part of me was saying this was my only chance. What did I have to lose?
Gary Holz

Gary Holz, D.Sc. (1950-2007), was an award-winning physicist and a psycho-neuro-immunologist. In 1994, confined to a wheelchair with multiple sclerosis, he went to Australia to stay with an Aboriginal tribe and experienced miraculous healing.

"What so many of us seek is not more information but guided wisdom that resonates with a deep place in our soul. One of love, nurturing, and truth that acts as another breadcrumb on the path to our true selves and healing at all levels. Robbie and Gary Holz’s footsteps on this sacred journey are what they share with readers in this book and in their work."

“Secrets of Aboriginal Healing is more than a manual for understanding Aboriginal healing secrets. It is an inspiring memoir that provides an immediate soul-healing to anyone who reads it.”

"Secrets of Aboriginal Healing demonstrates how--against all odds--an ordinary human being can participate in their own healing process and move from extreme illness to high-level wellness. A must read for anyone who wants to gain freedom from disease and other challenging circumstances."

"In this dramatic and inspiring book Gary Holz charts a course on how intuition, surrender, and willingness are essential to the heroic journey of healing oneself."

– Ward Serrill, filmmaker, director, and writer of the award-winning film The Heart of the Game

". . . allows us a special glimpse into the heart of the Aboriginal world. It offers us insights into an ancient system of healing that touches on all aspects of wellness, from the physical to the spiritual to the emotional."

– Joy Parker, coauthor of Woman Who Glows in the Dark and Maya Cosmos

"This story inspires us to engage our own life more fully--to awaken our own inner capacity for well-being--no matter where we find ourselves."

– Jim Macartney, author of Crisis to Creation: Our Power of Choice

"Anyone who needs to heal would enjoy this book."

"Different from most self-help books, Secrets of Aboriginal Healing gives a more personal voice to learning about the healing powers we each have inside of us."

By Gary Holz
With Robbie Holz
LIST PRICE $7.99
PRICE MAY VARY BY RETAILER