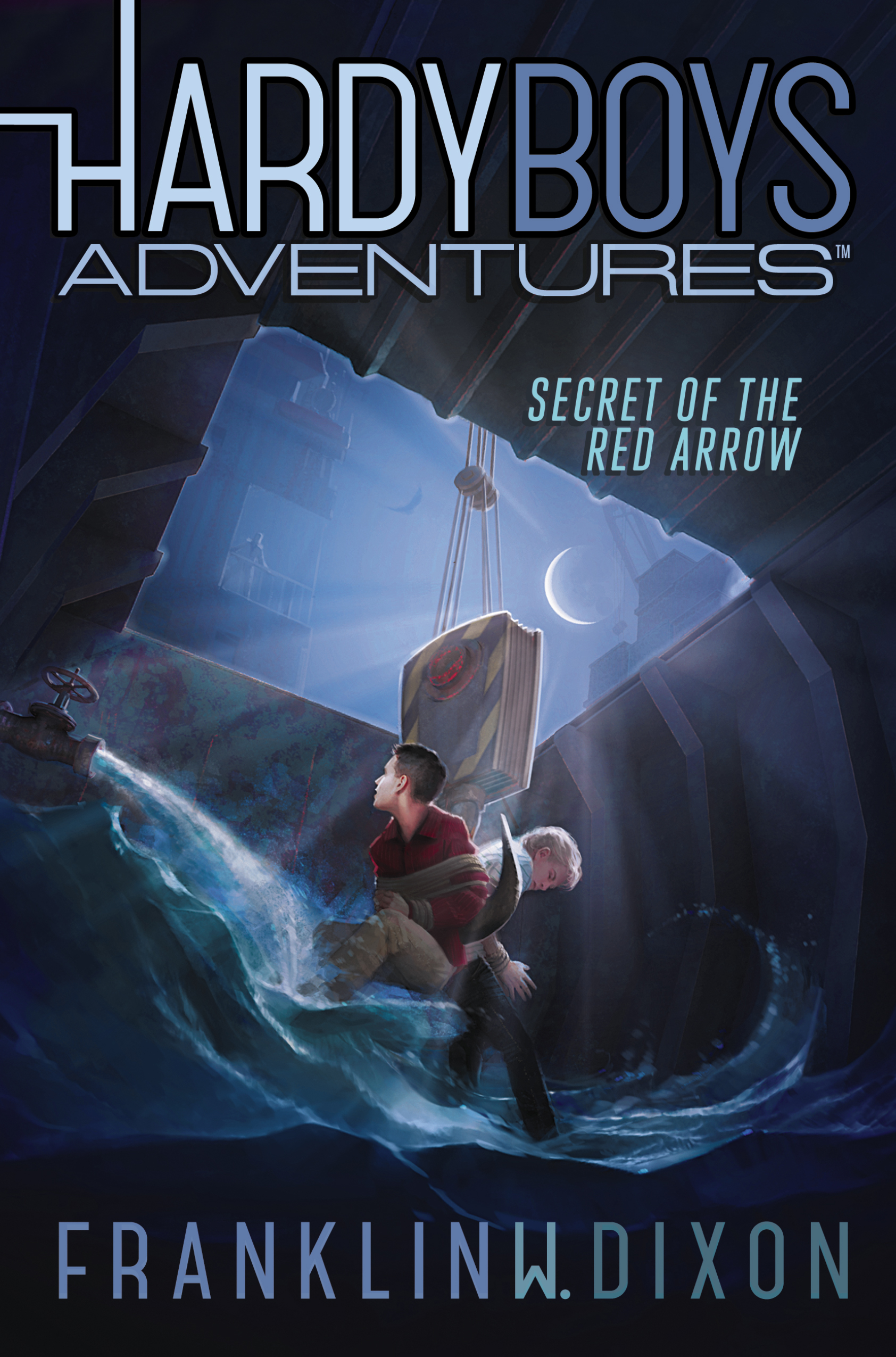 The Hardy brothers must dismantle a dangerous crime gang in this first book of a fresh approach to a classic series.

Teenagers Frank and Joe Hardy are supposedly “retired” from their detective work. But there is a new mystery in Bayport that needs their investigative expertise—and fast!

Starting with a bank heist, a series of alarming pranks have popped up around Bayport. Ultimately harmless, the pranks turn out to be the work of Seth Diller, an amateur filmmaker who plans to make “zillions” from his reality-horror flick, which he’ll use to help out his brother, a wounded Marine.

But after the Hardy brothers put a stop to the Panic Project, there is a new outbreak of Seth-like pranks—only these have definite victims. All signs point to evidence of a crime gang in Bayport, and Frank and Joe undertake the most dangerous investigation they’ve ever encountered. It’s up to them to save their town—and themselves—before the Red Arrow gets to them first.

IT’S FUNNY TO THINK ABOUT HAVING ENEMIES. Not funny ha-ha. Funny strange.

I was standing in line at the First Bayport Bank on Water Street. Dad had sent me here on an errand, explaining that the Hardy household believed in banking in person, not online. Mistakes were less common, he said, when the tellers had a face to remember. Even plain old Frank Hardy’s face.

I knew it was just an excuse to get me out of the house. “You’re spending too much time cooped up in front of a computer screen.” Dad, Mom, Aunt Trudy, and my brother, Joe, each told me that at least five times a day.

Well, they weren’t the ones who had to give a speech. That’s right: In one week, yours truly had to get up in front of the entire Bayport High School student body to present my American history paper on civil liberties, which my teacher, Ms. Jones, had called “exceptional.” I’d been really happy about that until I realized it would lead to mandatory public speaking. Thinking about it gave me turbocharged butterflies. I was embarrassed to admit it, but if there was one thing I truly hated, it was public speaking. D-day was right around the corner, and I didn’t even have a final speech yet. I pretended to be “researching,” but the reality was that I was turning into Joe: a world-class procrastinator.

The line in the bank was long, and the wait was boring. It had rained all morning, which meant drippy umbrellas inside. My sneakers were soaked through from the walk.

I took out my cell and texted Joe. We were going to meet up later at the Meet Locker to study. (That’s a coffee shop, in case you were wondering. A popular hangout, it’s open late, and they serve a mean Maximum Mocha.)

Typical, I thought. Bayport had become notorious for its spotty cell reception.

Staring down at my phone, I accidentally bumped into the person in front of me in line. “Sorry,” I said. The guy glanced back. Then, eyes widening, he turned to face me.

It was Seth Diller, Bayport High’s very own Quentin Tarantino.

He studied me with his strange, unblinking, pale-blue eyes. He looked very highly charged for some reason, like he’d beaten me to the Meet Locker and drunk about twelve espressos. A few inches shorter than me, Seth was wearing a black turtleneck so tight it made me wonder if his brain was being deprived of oxygen. Finally he dipped a nod in my direction. “Frank,” he said quietly.

I didn’t know Seth very well. But he always had a camera in his hand. He was president of the Bayport High AV Club.

His specialty was monster videos. I’d seen a couple on the club website. Lots of fake tissue damage and gross-out effects. Joe appreciated that Seth took the time to make all his effects “in the camera”—meaning not digitally. No CGI for Seth. He was a purist. Joe was a fan, me not so much.

“Working on any new monster masterpieces?” I asked, just to be friendly.

I guessed that was impressive. “What’s it about?” I asked.

He frowned and gave a shrug. “It’s hard to describe.”

I figured he didn’t want to talk about it, so I just wished him luck and changed the subject. “Hey, how’s your brother doing?” Tom Diller, Seth’s older brother, had been badly wounded while serving with the marines in Afghanistan.

Seth grew quiet, and I was starting to feel sorry I’d brought up such a personal subject. That’s when we heard the screams.

“Everybody stay where you are!” a voice yelled.

Three men with guns, each wearing a mask from a recent slasher movie, had entered the bank. They were moving fast, pistols in their outstretched hands. One disarmed the security guard, dropped the guard’s gun in a trash can, and forced him to lie on the floor. Another locked the front doors. The third came toward us.

I’m not going to lie: I was shocked, and a little scared. I could feel my heart hammering in my chest like it was trying to break out. The truth is, I’d been in far stickier situations than this one, but you don’t exactly expect to run into a bank robbery on a Saturday morning in a sleepy little town like Bayport.

Seth, standing right beside me, stiffened and made a panicky sound in his throat. Seeing his fear brought me back to my senses. “Stay calm,” I whispered to him. “Do whatever they ask. Everything will be fine.”

He was fumbling in his pocket. Glancing over, I saw him take out his smartphone. Hands shaking, he hurriedly tapped the screen until a wobbly image of his own feet came up. He had enabled the video cam.

He was going to record the robbery.

“Seth, listen to me very carefully,” I said in an urgent whisper. “Do not do that. These men are wearing masks for a reason. Just put your phone away.”

But he wasn’t listening. He cupped his hand so the phone was partway concealed and held it low against his leg, angling out at the room, capturing the heist in action.

“Empty your pockets and your purses!” the third gunman yelled. He was my height and thin, wearing a bulky army jacket that didn’t fit. “Nice and calm, people. No sudden moves. We don’t want to hurt anybody.”

The gunman who had locked the doors joined him. “But we will shoot anyone who gets in our way!” he shouted. He rushed to one of the tellers’ windows and proceeded to collect money from behind the counter.

Army Jacket began taking valuables from the people standing in line. Rings, necklaces, and wallets disappeared into a canvas bag he was carrying. He made quick work of it. My mind was racing. What would be the reaction of the gunmen if they saw Seth recording them? It would depend on a million factors. How experienced they were. How nervous. How desperate. Were these men killers?

Army Jacket reached Seth, standing right by my side. I held my breath. The gunman paused only for an instant while Seth dropped his wallet and wristwatch into the canvas bag in one movement. He hadn’t seen Seth’s phone in his other hand. I breathed a two-second sigh of relief. Then Army Jacket was facing me.

Something strange happened then. Army Jacket just stood there, letting the moment drag on too long. He didn’t say anything. He didn’t take my watch or my wallet. He didn’t even seem all that threatening. He was just . . . staring at me.

Did he know me? It was possible. Even though my brother and I are supposed to be officially “retired,” we’d put away a fair share of criminals in our time. Maybe this guy had been sent to prison, courtesy of Frank and Joe Hardy, and had just gotten his release.

See, our dad, Fenton Hardy, was once a world-famous detective. Growing up, Joe and I would help him on his cases. Then we began tackling mysteries on our own. We were proud of our successes. But after one too many close calls, things started to get a little out of hand, for reasons having to do with private investigators’ licenses (we didn’t have any), insurance (none of that, either), and the threat of being sued by every hoodlum we ever put under a citizen’s arrest. Which is not how my brother and I wanted to spend the remainder of our teenage years, provided we’re lucky enough to survive them. Some of us even have hopes of college one day . . . of a scholarship . . . of a normal life.

So with a few phone calls, including references from our principal and assurances to the police chief and state attorney general, we “retired.” Officially, it stays that way—for all the Hardys. Our dad writes books on the history of law enforcement. And Joe and I go to high school.

That cozy arrangement, a.k.a. “the Deal,” lasted about a month before Joe and I started going crazy. Maybe being a detective is something in your blood. I don’t know.

Since then we’ve started taking the occasional case for a good cause or to help a friend, but we try to keep it confidential. And we deny everything. We don’t consider it lying, just being prudent. We haven’t told our dad, which makes me feel a bit guilty, but I get the feeling he suspects.

Not that it mattered right now. All that mattered was that Army Jacket’s arm had slowly fallen to his side. His gun was pointed at the floor. Like he’d forgotten about it. Now was my chance.

I was about to grab the gun and wrestle it out of his hand, but his accomplice hollered, “Hey! What are you doing?”

Shocked back into the moment, Army Jacket raised his gun again. My chance was gone. I’d blown it. I could see the tiny mouth of the black barrel, aimed between my eyes. He was about to fire!
Franklin W. Dixon