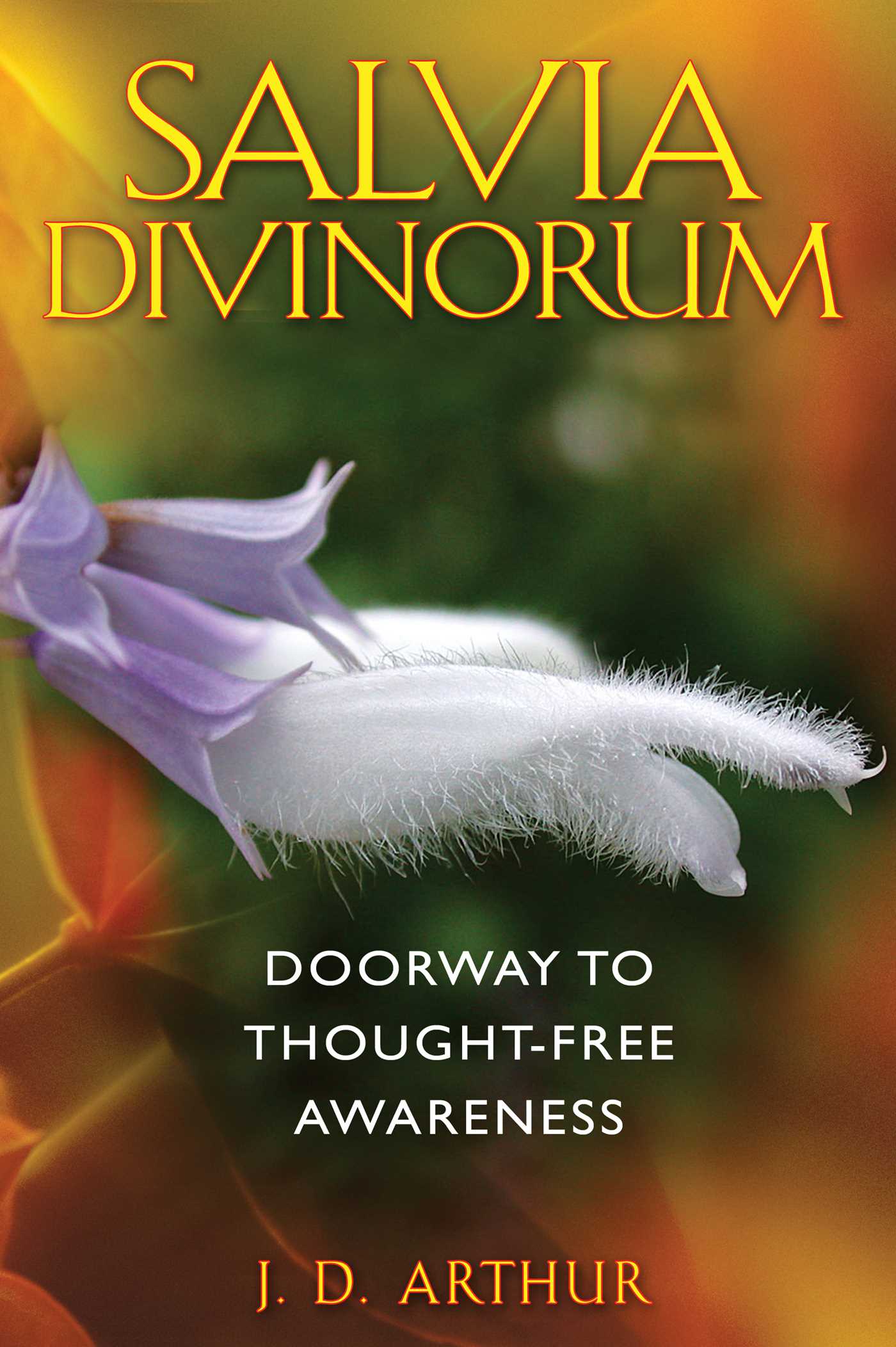 • Offers guidance for the responsible use of this psychoactive plant

Salvia divinorum, which recently entered the visionary pharmacopoeia of the modern world, has been used for centuries in the shamanic practices of the Mazatec Indians of Oaxaca, Mexico, for healing and divination. A member of the Mint family, Salvia divinorum--“diviner’s sage”--offers a new doorway to the visionary pursuit of higher spiritual and meditative states.

With repeated sessions using salvia over the course of several years, J. D. Arthur began returning each time to the same inner landscape where he found himself entering a unique state of thought-free, or “thoughtless,” awareness. There he accessed a mode of “dream language” that communicated an exquisite constellation of detailed meanings swiftly and flawlessly. His repeated immersion in these states of trance, as well as his analysis of their approach and withdrawal, led to a profound reassessment of the nature of normal perception and a reevaluation of what we refer to as the real world. With true-life descriptions of salvia-induced visionary states, this book offers a detailed experiential analysis for those interested in exploring salvia in their quest for higher knowledge.

During the first two years of my salvia explorations, additional aspects of the experiences were becoming more and more apparent with the passage of time. What at first appeared to be peripheral occurrences, with time deepened and began to evince a more central role in the trance.

Perhaps the most significant of these aspects was the gradual realization that, at a certain point in the initial entering of the state, there occurred a unique transformation in the area of language. This was so subtle that only with repeated trials, as well as a deliberate focus on the actual mode of perceptual transformation, did it become apparent that it held not a peripheral role but a central one.

At a certain point after entering the state, the language that would normally describe in an internal, almost unconscious, way the scenes, thoughts, and images that arrive through the senses would change. It would cease to be English. This apparent absurdity proved to be not only what might be perceived as an arbitrary adjunct to the experience but an essential component of the change of awareness that entailed so many incomprehensible facets. It was as if the language itself was inexorably linked to the perceptual changes intrinsic to the state. It almost seemed as though the rapidity and depth of the experiences necessitated its own mode of communication.

Since the defining modality of these experiences was proving to be the cessation of thought, it follows that the normal process of language would also have to undergo a radical change. It goes without saying that normal language depends wholly on memory for every aspect of its functioning. If the memory itself ceases to function, as was becoming apparent in the salviaic state, then language as we know it must also cease. It’s as if the feather-light swiftness of the state can’t bear the slow weight of words, or at least normal words.

The language that characterizes the trance state is, like so many other aspects of the salviaic state, at once totally foreign yet somehow utterly familiar. After I began suspecting that there was indeed a change of language, I endeavored to observe the exact point of the shift, to observe the nuances of this change. What I found was that there occurred an all but unnoticeable transition into this new mode of communication. It was as if the vignettes that would present themselves would have a certain “flavor” of foreignness. As this foreign nature would become more obvious, it seemed there would come a point at which I would question in some very primitive, immediate manner whether the scene I was witnessing was disturbingly alien or secure and familiar.

At the same time, as these foreign occurrences would begin to manifest, this new language, as well, would begin to make its appearance. As I mentioned above, this alien language would begin to enter the context of the vignettes in an essentially seamless fashion. I would find myself witnessing a scene that was in effect being described in this new language. As a result of this change of conceptual matrix, the scene would then transform in a most subtle fashion into something comprehensible. The fact that I was so focused on this point of change also reinforced my observation that this language is a genuine auditory process--that it is actually “heard,” in effect, with the ear, although of course this is an inner process.

I can think of no parallels in our ordinary experience, with the exception perhaps of those circumstances where one hears one’s name being called just after falling asleep. The latter can be an experience startling to the point of wakefulness. While the salviaic voices are merely part of the progressing vision, the distinct auditory nature is not dissimilar. The paradoxical nature of this new language was such that, although recognizable initially as foreign, it was also totally comprehensible. One would scarcely even notice the transition, since this other language is completely understandable and dovetails so appropriately with the new state in which one finds oneself. At this point, I’m not certain that I’ve spoken this language, although on a few rare occasions I have spoken a word or phrase. I can only surmise that it was through this medium, since normal words would be unbearably cumbersome and irretrievably out of reach.

On one occasion, after this language shift became more apparent, I attempted to “bring back a word.” My notes, written the next day, can illustrate the experience:

On this occasion, after entering, I was told by someone that I “had something there” (the word something, of course, was not actually used); what it was, was unclear. The meaning, though, was that I had some type of essentially “physical” connection to this other world. That connection consisted in this “something.” At that point, I made the decision to attempt to remember or “take back” the word that described my connection with them. I, in effect, “held on” to this word, holding it to my chest. The form of this word was like a bowl--the open end being pressed to my chest, my arms wrapping around the bottom of the bowl. The sensation that ensued was not unlike traveling upward through water, clutching the treasure I’d retrieved from the depths. When I surfaced and began to reintegrate, I understood the word to be “name.” I had succeeded in bringing back a word from the other world. Although the word, over there, was not in our language, the concept it represented seemed to translate to a concept in our language, namely the concept of “name.”

I felt that the import of the experience was that I, in effect, had a “name” there and that this somehow ensured my connection with that world. The concept of name was not concerned with appellation but more with some primitive type of signature.
J. D. Arthur

J. D. Arthur began experimenting with hallucinogens during the 1960s. This led to a lifelong interest in spirituality and the enhancement of awareness. He works with disabled adults as well as people with mental illness and lives in northern New England.

“For those interested in experiencing Salvia divinorum, this is an honest, detailed, and caring account of the territory you will encounter.”

– Stephen Buhner, author of The Secret Teaching of Plants and Sacred Plant Medicine

“We are fortunate to have J. D. Arthur’s thoughtful, reasoned accounts of ‘thoughtless’ passages. I agree with J. D. Arthur--go with a sober sitter.”

“Fascinating. Salvia Divinorum is a clear, inspiring, and insightful account of meetings with a powerful teacher plant. In the spirit of the classical psychedelic explorers, J. D. Arthur kept a meticulous record of his work with Salvia divinorum. In this easy-to-read book he provides others with a road map for their own explorations, as well as a detailed guide to the territory. After reading Arthur’s book I am inspired to look again at salvia.”

– Ross Heaven, author of Plant Spirit Shamanism and The Hummingbird’s Journey to God

"This author's thoughtful investigation of the unique, leaf-induced state merits careful attention. His methodical approach and detailed documentation is a model of how to meaningfully explore such vast and elusive topics as time, mind, and language. His careful forays led him to establish familiar pathways both into and out of what he suggests may be another reality, or the far side of death. Mr. Arthur's conclusions beg the very question: What is thought?"

"This another of Inner Traditions' serious studies of the use of shamanic psychogenic drugs. It begins with an overview of the use of hallucinogenic drugs in the United States. The author is careful to affirm that he is not promoting the use of such drugs, only recording his personal experiences over several years. He also makes clear that he did extensive research into the chemical makeup of salvia before using it, and that the drug was legal in the United States when he did his experimentation with it."