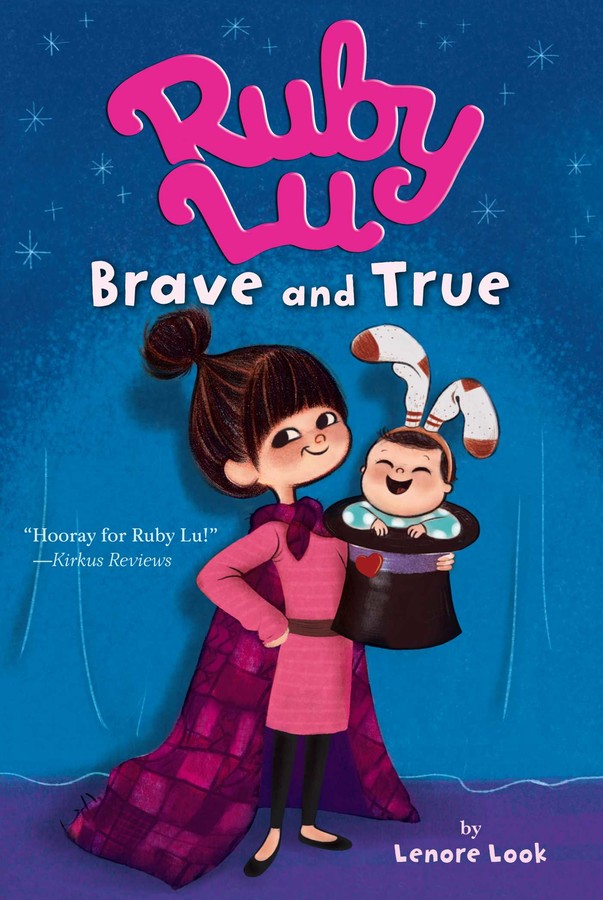 Most days the best thing about being Ruby is everything. Like when she's the star of her own backyard magic show. Or when she gives a talk at the school safety assembly on the benefits of reflective tape. Or when she rides the No. 3 bus all the way to Chinatown to visit GungGung and PohPoh.
And then there are the days when it's very hard to be Ruby. Like when her mom suggests Chinese school on Saturdays. Or when her little brother, Oscar, spills all of Ruby's best magician secrets. Or when her parents don't think she's old enough to drive!
Come along with Ruby Lu in her chapter-book debut -- which even includes a flip book of a magic trick -- and share the good and the not-so-good days with an (almost) eight-year-old Asian-American kid.

The best thing about living on 20th Avenue South was everything.

Ruby liked her house. She had lived there since kindergarten. Tomato slugs lived at the bottom of the front steps. A plum tree lived in the backyard. The kitchen smelled like jook and ice cream.

Ruby liked the rain. It rained often on 20th Avenue South. The rain sprinkled diamonds on spiderwebs and poured silver on the sidewalks. At night the rain was a lullaby of a billion grains of rice falling on the roof.

Ruby liked the sunshine. It was not often sunny on 20th Avenue South, but when it was, all the bottle caps in the street shone like coins. Windows opened. Radios played. Laundry dried. Plums ripened. Mothers took their babies out.

Ruby liked her school. Kimball Elementary was usually four blocks away. But whenever Ruby got the urge, school was nine blocks away: two more blocks over to the driving range to look for golf balls that had come through the fence, three blocks backtracking to school. Ruby was almost eight and was finally allowed to walk to school by herself. She wore lots of reflective tape -- just so her mother wouldn't have to worry, especially on foggy mornings.

"Everyone should wear reflective tape," Ruby liked to say. And she got to say this every year at the school safety assembly.

Ruby liked her new wallet. The librarian gave out a shiny wallet to every child who became a card-carrying member of the Beacon Hill Public Library. It was school-bus yellow and closed with crunchy Velcro. Ruby carried her wallet everywhere. It meant that she was almost ready for a driver's license and credit cards. Ruby could hardly wait.

Ruby especially liked after school. Mr. Tupahotu's magic class began at 3:12 sharp. Ruby was never late. Mr. Tupahotu had been a famous magician before he became a teacher. He turned scarves into butterflies. He floated a beautiful lady in midair. He owned 513 rabbits (not all at once). He appeared on TV. He signed an autograph for Ruby.

The Great Tupahotu was now just a regular guy, but he was not your regular second-grade teacher. He could read a whole Russian novel (without falling asleep) and usually one of Ruby's book reports (without confusing the two). In addition he could tell who threw the paper airplane just by the way it was

folded, and fold a much more impressive one. He knew the difference between a person, place, and thing, except sometimes when it came to Ruby's imaginative writing. And he could write in cursive, even on the blackboard.

In magic class he made everything look so easy. But everything was actually very hard. Ruby could never do any of the tricks the first time around. Or the second. Or sometimes even the 199th. But she was getting better.

She could put a coin through her elbow.

She could cut a string into two pieces and then turn it back into one piece.

She could hypnotize a handkerchief and make it obey.

She could almost make a coin stand up just by blowing on it.

She could make knots disappear...usually.

And she could make flowers appear...sometimes.

Ruby starred in her very own backyard magic show, Ruby's Magic Madness. And neighbors on 20th Avenue South agreed that she was truly amazing.

Ruby liked her neighbors. Wally lived across the street. Before that he'd lived in Hong Kong. Wally was the only child Ruby knew who could speak Cantonese without having gone to Chinese school. He was fluent, Ruby's mother said, which meant that he could speak Chinese all day without running out of words. Ruby was very impressed. Still, she was glad when Wally did not sign up for magic class. With a little help from Ruby, he had signed up for Bonsai Club.

Tiger was Ruby's best friend. He lived two blocks away, but it felt like he lived next door. He was faster than e-mail. "Don't break the speed limit!" his mother always called after him. He was also fast at making friends. With just the right smile, he was always saying hi and having a chat. Ruby didn't make friends so quickly. She liked her old friends best.

"You never know when a new friend might become another best friend," Tiger told Ruby. "Just smile and look them smack in the eye."

But the very best thing about living on 20th Avenue South was Oscar. Oscar was Ruby's baby brother. When he was brand-new, he felt as solid as wrapped tuna from the Pike Place Market and smelled like fresh-baked daan taht. He was more beautiful than Ruby had imagined. She had waited a very long time for him. And when he came home from the hospital, she had nearly forgotten that she had wished for a puppy.

But Emma also had a baby brother. When he was brand-new, he, too, felt like wrapped fish and smelled like something freshly baked. Sam was more beautiful than Emma had imagined. She had waited a very long time for him. And when he arrived, she and Ruby became as close as sisters.

Sam could tell when it was lunchtime.

When Sam was only two days old, he smiled at Emma.

"It's just gas," Ruby had explained. "It says here that if babies smile before four weeks old, it's only because of gas."

That's what the baby book said. But Emma didn't believe it. Emma smiled at Sam. And Sam smiled back. Ruby saw it with her very own eyes. She'd had to think fast.

She climbed their plum tree, but Oscar wasn't watching.

So she climbed back down.

She took a bathroom break.

When she came back, she tried some jokes.

But all Oscar did was cry and sleep.

Ruby wanted to cry too. Waiting for a stinky baby brother to smile was harder than waiting for morning recess at school.

Finally, Oscar smiled at Ruby, and he was still only two days old.

Before long Sam rolled over.

Oscar really was the cutest little brother on 20th Avenue South. He had headlight eyes, a drippy tongue, and a runny little nose. Ruby liked doing her magic tricks for Oscar, who cooed and drooled and clapped under their plum tree. Ruby's magic show had many fans, but Oscar was the best one of all. When everyone else went home, Oscar was still there. Oscar loved Ruby. And Ruby loved Oscar.

But Oscar was not producing, as Emma had delicately put it.

Oscar put all his toes in his mouth.

He blew bubbles through his lips.

To make matters worse, Sam said his second word. And then his third. And his fourth. Soon, he said what sounded like the longest sentence Ruby had ever heard.

"Daddy and Mommy have a pretty baby," Emma translated triumphantly.

Desperate, she asked for advice.

"Sorry," said the lady at the dog obedience school, giving Oscar the once-over in his puppy suit. "He has to be a real puppy."

"Every baby develops at his own rate,"

So Ruby tried the library. She borrowed language tapes and videos.

She put Oscar in front of the mirror. She moved his lips. He moved his hips. Ruby was a convincing ventriloquist. And Oscar was ready for his nap.

Ruby was close to tears. Oscar gave Ruby a yawn. And a burp.

But Oscar did not say boo.

That night Ruby dreamed that Oscar was making a speech.

Millions were transfixed. When Oscar finished, the applause was thunderous and utterly transporting. Ruby clapped loudest of all.

The next morning Ruby ran straight to Oscar's room. But Oscar the Orator was nowhere to be seen. It was just the same old Oscar. And Ruby felt her love for him getting thin around the edges.

Now the worst thing about living on 20th Avenue South was Oscar. Oscar was not talking. If only Oscar would say something -- one word -- everything would be right again. Rain would fall. Slugs would ooze. Plums would grow. It was all Ruby wanted. It was all she could think of. She wished for it with her cigar box full of old birthday candles and Thanksgiving wishbones. And just before falling asleep, she wished for it upon all the stars in the sky.

Lenore Look is the author of Ruby Lu, Brave and True, an ALA Notable Book; Love As Strong As Ginger, illustrated by Caldecott Honor artist Stephen T. Johnson; and Henry's First-Moon Birthday, illustrated by Yumi Heo. She lives in Randolph, New Jersey.

Anne Wilsdorf is the illustrator of Ruby Lu, Brave and True, as well as Alligator Sue by Sharon Arms Doucet. She lives in Lausanne, Switzerland.