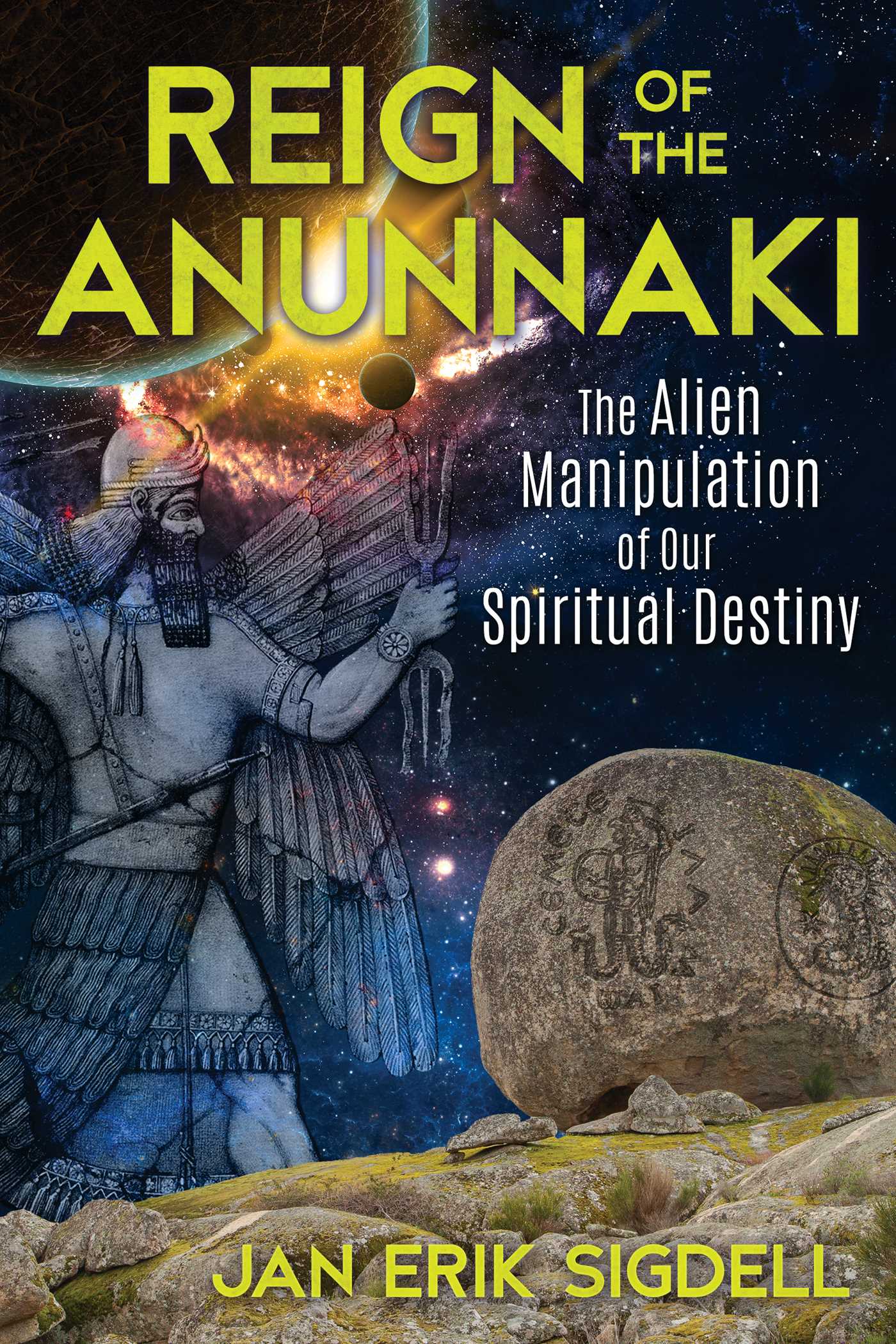 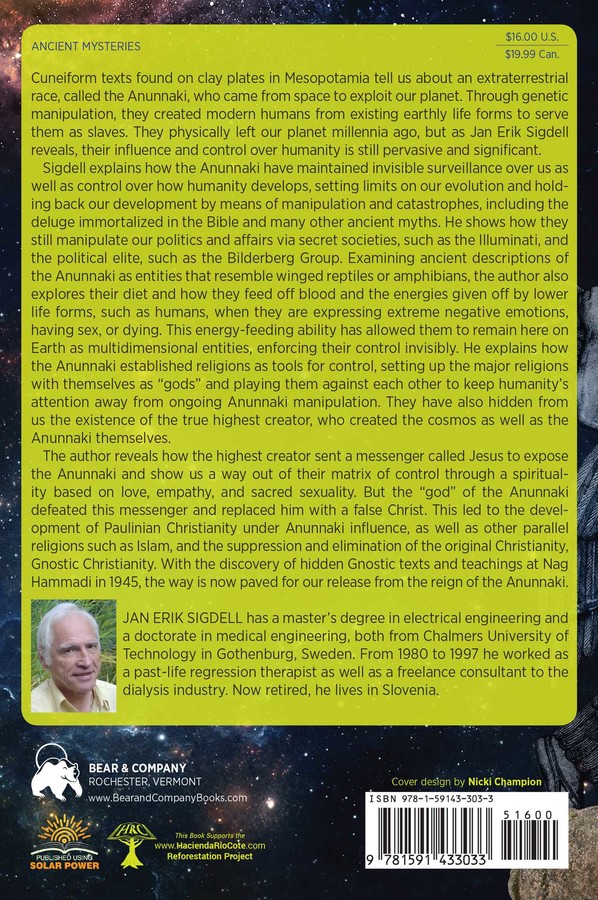 • Explores how the Anunnaki have maintained invisible surveillance over us and how they control our development through religion, secret societies, and catastrophes

• Reveals how they feed off our energies and how this ability has allowed them to remain here on Earth as multidimensional entities, enforcing their control invisibly

Cuneiform texts found on clay plates in Mesopotamia tell us about an extraterrestrial race, called the Anunnaki, who came from space to exploit our planet. Through genetic manipulation, they created modern humans from existing earthly life forms to serve them as slaves. They physically left our planet millennia ago, but as Jan Erik Sigdell reveals, their influence and control over humanity is still pervasive and significant.

Sigdell explains how the Anunnaki have maintained invisible surveillance over us as well as control over how humanity develops, setting limits on our evolution and holding back our development by means of manipulation and catastrophes, including the deluge immortalized in the Bible and many other ancient myths. He shows how they still manipulate our politics and affairs via secret societies, such as the Illuminati, and the political elite, such as the Bilderberg Group. Examining ancient descriptions of the Anunnaki as entities that resemble winged reptiles or amphibians, the author also explores their diet and how they feed off blood and the energies given off by lower life forms, such as humans, when they are expressing extreme negative emotions, having sex, or dying. This energy-feeding ability has allowed them to remain here on Earth as multidimensional entities, enforcing their control invisibly. He explains how the Anunnaki established religions as tools for control, setting up the major religions with themselves as “gods” and playing them against each other to keep humanity’s attention away from ongoing Anunnaki manipulation. They have also hidden from us the existence of the true highest creator, who created the cosmos as well as the Anunnaki themselves.

The author reveals how the highest creator sent a messenger called Jesus to expose the Anunnaki and show us a way out of their matrix of control through a spirituality based on love, empathy, and sacred sexuality. But the “god” of the Anunnaki defeated this messenger and replaced him with a false Christ. This led to the development of Paulinian Christianity under Anunnaki influence, as well as other parallel religions such as Islam, and the suppression and elimination of the original Christianity, Gnostic Christianity. With the discovery of hidden Gnostic texts and teachings at Nag Hammadi in 1945, the way is now paved for our release from the reign of the Anunnaki.

Biblical Origins in the Cuneiform Texts of Mesopotamia

In the Bible, Yahweh releases the Flood to wipe out a sinful humanity and to make a new start with Noah. In the Mesopotamian texts, Enlil brings on the Flood in order to eliminate the whole of humanity, which has become annoying to him, while Enki transgresses a prohibition to speak, making a new development of humanity possible through Atra-Hasis (Utnapishtim, Ziusudra).

Yahweh is a god of war and storm.(23) The name Enlil means “lord of the storm,” and he is also a god of war. Enlil is sometimes friendly to humanity, but can also be severe, choleric, and even cruel. He punishes humans excessively and sends them calamities. Some Mesopotamian images show him with a crown with horns.

The “Sons of God”

These “sons of god” are called “sons of the ’elohim” in the Hebrew text, that is, “sons of the gods.” It is highly probable that these ’elohim were actually the Anunnaki and were thus the above-mentioned “watchers.” The word that is here translated as “giants” is nephilim and it actually means “those who fell down (or were thrown down),” from naphal = “fall” or “cast down.” (The word nephilim is sometimes used as a misnomer for “the sons of the ’elohim,” but in the biblical text it refers to their offspring with terrestrial women.)

Other translations refer to the “mighty men” as “heroes,” “tyrants,” and the like. They are giborim, also translated as “masterly men,” humans with special capacities. “Men which were of old” (Hebrew ‛olam) could indicate that they originated from beings that had been around for a very long time--again, probably Anunnaki.

After a long presence on the Earth, the Anunnaki left but retained control over us. For this purpose, they ordered some of their people (regarded as “angels” by the humans) to remain as “watchers” on our planet. Since the Anunnaki are obviously multidimensional beings, they can hide in other dimensions, remaining invisible to us. Indeed they probably engineered our DNA to limit our perception to three dimensions.

Although the Anunnaki apparently left us alone, the watchers became a link between them and us. But this was a one-sided communication: we no longer received information about them, although they did about us. We did not know what was going on and did not have full control over ourselves. Instead they maintained a secret control over humans, subliminally and unconsciously. About this is written in the books of Enoch:

So the watchers had children with the daughters of men that grew up to be giants. These allegedly took to devouring humans. They wanted to eat meat from them and from animals and drink blood. But these two hundred “fallen angels” also taught their children and the daughters of men many secrets about magic, astrology, geomancy, the use of metals, and other things. To god, this went too far, and he ordered Uriel to warn Noah that a deluge would come over the Earth. The fallen angels were then imprisoned in the abyss until the day of judgment.

The “sons of god” are mainly described in a negative way, but we may also have another impression of them. They had asked god not to “create” humans on the Earth, but since he had done so after all, they wanted to be close to them. The Anunnaki had “created” humans through genetic manipulation to make them work for them as slaves, and wanted to keep them in a primitive state so that they would not understand too much and would remain compliant. It appears that the watchers had some compassion for these humans and wanted to raise their consciousness by giving them their own genes, and for that purpose they had children with terrestrial women (although their motives are described as pure lust). Thus the watchers violated a prohibition, which appears to be their real “sin.” Humans were to be eradicated through a deluge because they were developing further than was intended (and they had eaten too much from the “tree of knowledge”). This actually means an ethnic cleansing by god!

Chapters 4 and 5 of the apocryphal text The Book of Jubilees even claims that the sons of the ’elohim had the task of educating humans and teaching them many things. They fulfilled this task (even if they might have gone a bit too far with it). Later they gave in to the temptation to become sexually involved with terrestrial women. What, then, was the real sin? Sexuality itself? Why, then, do both humans and, evidently, the watchers have sexual organs? Why should they have them but not be allowed to use them? After all, in Genesis 1:22 humans are told to reproduce. The logical answer is that this prohibition has to do with something else. The sons of the ’elohim were forbidden to have children with terrestrial women because that way their genes would be given to humanity! These genes led to a rapid but undesired development of humans on our planet. The Flood was intended to make them revert to an earlier state.

Could it be that the children of the watchers were “giants” in a different sense, that is, because they had a higher intelligence and a higher consciousness than humans were supposed to have (even if they may have also been bigger physically)? The accusation that these giants devoured humans (or perhaps made them captives) could be a defamation used as an excuse for their destruction.
Jan Erik Sigdell

Jan Erik Sigdell has a master’s degree in electrical engineering and a doctorate in medical engineering, both from Chalmers University of Technology in Gothenburg, Sweden. From 1980 to 1997 he worked as a past-life regression therapist as well as a freelance consultant to the dialysis industry. Now retired, he lives in Slovenia.