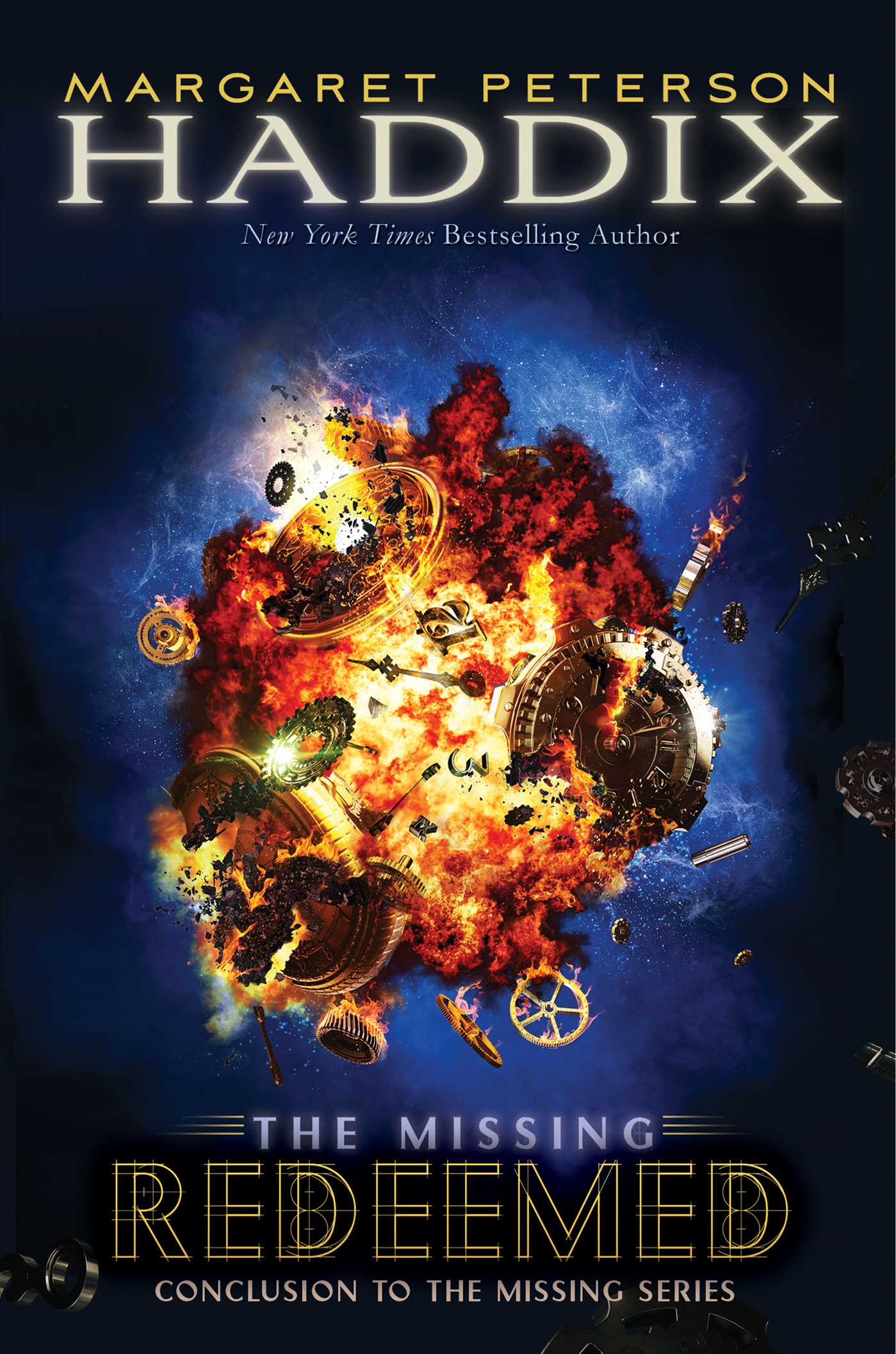 Jonah’s new twin must time travel and face off against his siblings’ worst enemy in order to save the future—and his family—in the eighth and final book of the New York Times bestselling The Missing series, which Kirkus Reviews calls “plenty of fun and great for history teachers as well.”

After traveling through history multiple times and finding out his original identity, Jonah thought he’d fixed everything. But some of his actions left unexpected consequences. His parents—and many other adults—are still stuck as teenagers. And now Jonah has a new sibling, an identical twin brother named Jordan.

As odd as all this is for Jonah, it’s beyond confusing for Jordan. How does everyone in his family have memories of Jonah when he doesn’t? How can his annoying kid sister Katherine speak so expertly about time travel—and have people from the future treating her with respect? A few rash moves by Jordan send them all into the future—and into danger. What if he’s also the only one who can get them back to safety, once and for all?

Redeemed ONE
When Jordan Skidmore came down the stairs that morning, he didn’t expect to see a strange kid sitting in his family’s living room.

He really didn’t expect to see a strange kid who looked exactly like Jordan himself.

Jordan instantly forgot that he’d been running downstairs to tell his sister, Katherine, that he had dibs on the biggest TV in the house. He forgot that, until a moment earlier, he’d been happy to be staying home sick from school, and to have nothing ahead of him all day except taking it easy.

He skidded to a stop on the wooden floor. “Who—who are you?” he blurted.

It felt like a stupid question. Jordan might as well have skipped ahead to What evil scientist stole my DNA and secretly cloned me? That was how much he and the other kid looked alike. The other kid had Jordan’s exact same shade of light brown hair, the exact same shape and shade of dark blue eyes, even the exact same stupid chin dimple, positioned just enough off center to make his whole face look slightly askew.

Which meant that looking at this kid was like looking into a mirror. Only this was a mirror image that could sit while Jordan was standing; he could shove back his messy hair while Jordan let both arms dangle uselessly—and he could raise his eyebrows and blink even as Jordan felt his own face stuck in a mask of shocked astonishment.

And it was a mirror image that could wear totally different clothes. Jordan had on a basketball camp T-shirt and gray sweatpants. This kid was wearing the nerdiest clothes ever: a sweater vest and short pants that buttoned at his knees and the same kind of stiff, ugly shoes Jordan’s dad wore to work.

Jordan also noticed that this mirror-image kid didn’t answer. But Katherine did. For the first time Jordan realized that his sister was sprawled on the floor by the other kid’s feet.

“Jordan, Jonah—the two of you have got to stop acting like the other one doesn’t exist!” she said.

Katherine was Jordan’s younger sister, eleven years old to Jordan’s thirteen. Still, she usually acted like it was her job to boss him around. Usually Jordan just ignored her. But what was she even talking about now?

“You’re exactly alike!” Katherine went on lecturing him. And . . . was she lecturing the other boy too? Did she know who he was and why he looked so much like Jordan? “You’re practically the same person! That’s why you’re not getting along!”

Jordan got the “exactly alike” part. But the rest of it made no sense. How could he and this other kid have ever gotten along or not gotten along—or acted like the other person did or did not exist—when they’d never seen each other before in their lives?

Jordan saw something like understanding slide over the other boy’s face. Did he know what Katherine meant?

Is this just some really, really good prank? Jordan wondered. And the other boy’s in on it?

The truth was, Jordan was more likely to try to prank Katherine than the other way around. And even if this was a Katherine prank, how could she have made someone look so much like Jordan? Even the best Hollywood makeup artist couldn’t do that, not even with makeup and a prosthetic nose and chin.

So, then . . . Jordan scrambled for other explanations that didn’t involve impossible pranks or evil scientists and secret cloning.

Something truly awful occurred to him.

Jordan was adopted. He’d never known anything about his birth family. Though he never bothered thinking about it much, it was possible that dozens of people out there in the world looked like him. He might have all sorts of blood relatives—brothers, sisters, cousins, even—that he’d never met.

Brothers and cousins wouldn’t look exactly like me, Jordan argued with himself. Sisters definitely wouldn’t.

But the idea that this kid might have something to do with Jordan’s adoption made him feel even more unsettled. His mind blanked out for a moment. He barely noticed Katherine and the strange kid—Jonah? Was his name Jonah?—snapping their heads to the left, to gaze out the front window toward the driveway. He barely noticed the sound of a strange car speeding into the driveway and slamming on the brakes with such a screech that the car must have just barely missed smashing into the garage.

So it was even more of a jolt when the front door beside Jordan swung open and banged against the wall. He turned just in time to see three strange kids sweep in through the door. They all looked to be about thirteen too. Two were girls and one was a boy; one of the girls was super tall.

“I thought—I thought you were going to change back,” strange mirror-image boy stammered behind Jordan.

Jordan was kind of relieved to hear the other boy sounding shocked too. But was he talking about changing clothes? These kids’ clothes looked normal: T-shirts and jeans like anyone would wear.

“We couldn’t wait,” the shorter girl said breathlessly. Her voice sounded kind of familiar, but Jordan couldn’t figure out why. “We had to make sure all three of you were safe first. Oh, Jonah . . . Jordan . . . Katherine . . .”

How does she know me and Katherine? Jordan wondered. And—does this prove mirror-image boy is named Jonah?

“We were so afraid we’d lose all three of you forever,” stolen-shirt boy wailed behind her.

Why would some kid Jordan had never seen before worry about losing Jordan and Katherine?

And does nobody else notice that this Jonah kid looks just like me? Jordan wondered.

Before he could ask any of these questions out loud, the shorter girl slammed into him, with stolen-shirt boy hitting him a split second later. It wasn’t a tackle. It was more like a running hug. The two of them pulled Jordan along, dragging him toward Katherine and Jonah. The kids yanked Katherine up from the floor and Jonah up from the chair into some weird group hug. Jordan didn’t even know any of these people except Katherine—and he and she had stopped hugging each other about the time Katherine started kindergarten.

Mom and Dad would probably like us to keep doing Skidmore family hugs all the time, but . . . ugh, Jordan thought. Not going to happen.

Maybe Katherine was thinking along the same lines, because as the two running huggers crushed them all closer together, she began stuttering, “M-mom? D-dad?”

Sarcasm, Jordan thought. Way to call those two out on how weird they’re being. They’re acting like parents!

She was such a drama queen.

“What happened to you?” she asked the newly arrived trio of strange kids. “I mean, I can see what happened to you—you’re, like, kids. But why? Or—did you travel from the past? How much did Jonah mess up time after I left?”

“I didn’t mess up time!” Jonah protested hotly. “I fixed it!”

“Katherine, it’s true,” the taller girl said, hovering behind the weirdo group-hug scene. “You missed a lot. Jonah saved everyone.”

Jordan grimaced. None of this made sense. Travel from the past? Messed-up time? Huh? But he felt something like a stab of jealousy. Had Jordan ever accomplished anything that made people say his name with such reverence and pride?

Short answer: No, Jordan thought. His parents were the type who made a big deal when he got good grades or scored a soccer goal or did some Boy Scout service project. But even they would never say that Jordan had “saved everyone.”

Somehow this made Jordan feel even weirder about the fact that identical-boy Jonah had his arm wrapped around Jordan’s right side, even as Katherine hugged him from the left. Jordan jerked back, breaking everyone’s hold on him.

“I don’t know what any of you are talking about,” Jordan said, and it annoyed him that his voice came out squeaky and childish instead of strong and forceful. “But Katherine, you’re going to get in trouble for inviting all these people over when we’re both home sick.”

The short girl wearing Katherine’s clothes reached for Jordan again. “Oh, honey,” she said, patting his shoulder. “I can see where this would feel very strange to you.”

Her voice was familiar. So was the way she was patting his shoulder.

It was exactly what his mother would say and do.

Jordan stared into this strange girl’s face. And now that he was focused, he recognized her. This girl looked exactly like his mother did in old pictures—the ones from thirty years ago, when she was a teenager.

Jordan shifted his gaze to stolen-shirt boy’s face, and it matched Jordan’s memory of his father’s old pictures too.

How could these two kids who were standing in Jordan’s own living room right now, in the twenty-first century, look so much like pictures from the past?

Jordan could think of only one explanation.

Because suddenly he saw the real reason Katherine had stammered, M-mom? D-dad? She wasn’t being sarcastic. Just stunned. These really were his and Katherine’s parents. Only somehow they’d turned back into kids again.

Jordan collapsed to the floor.

"A satisfying end to a long-running series."