A True Story of High Finance, Murder, and One Man's Fight for Justice

A real-life thriller about an American-born financier in the Wild East of Russia, the murder of his principled young attorney, and the dangerous mission to expose the Kremlin officials who were responsible.

Bill Browder began his career as a Wall Street maverick whose instincts led him to post-Soviet Russia, where he made—then lost—then remade his fortune. Pursuing corruption at Russian companies came at a cost, however, and he barely escaped with his life. His Russian lawyer, Sergei Magnitsky, wasn’t so lucky: he was jailed, tortured, and ultimately killed for crimes he did not commit. This changed Browder forever.

Part financial caper, part crime thriller, part political crusade, Red Notice is the story of one man’s decade-long fight to expose the murderous heart of the Putin regime—a fight that’s made him Putin’s number one enemy. 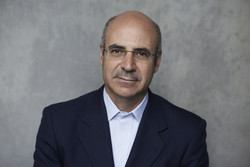 Bill Browder, founder and CEO of Hermitage Capital Management, was the largest foreign investor in Russia until 2005. Since 2009, when his lawyer, Sergei Magnitsky, was murdered in prison after uncovering a $230 million fraud committed by Russian government officials, Browder has been leading a campaign to expose Russia’s endemic corruption and human rights abuses. Before founding Hermitage, Browder was vice president at Salomon Brothers. He holds a BA in economics from the University of Chicago and an MBA from Stanford Business School.

“Reads like a classic thriller, with an everyman hero alone and in danger in a hostile foreign city . . . but it’s all true.”

"The first half of Red Notice traces Browder’s improbable journey from prep-school washout through college, business school, and a series of consulting and Wall Street jobs before becoming Russia’s largest foreign investor....This book-within-a-book does for investing in Russia and the former Soviet Union what Liar’s Poker did for our understanding of Salomon Brothers, Wall Street, and the mortgage-backed securities business in the 1980s. Browder’s business saga meshes well with the story of corruption and murder in Vladimir Putin’s Russia, making Red Notice an early candidate for any list of the year’s best books."

"The story of Sergei Magnitsky's life and death is a shocking true-life thriller, and Bill Browder was the man to write it."

“In Red Notice, Bill Browder tells the harrowing and inspiring story of how his fight for justice in Russia made him an unlikely international human rights leader and Vladimir Putin's number-one enemy. It is the book for anyone interested in understanding the culture of corruption and impunity in Putin's Russia today, and Browder’s heroic example of how to fight back.”

"This book reads like a thriller, but it's a true, important, and inspiring real story. Bill Browder is an amazing moral crusader, and his book is a must-read for anyone who seeks to understand Russia, Putin, or the challenges of doing business in the world today."

– Walter Isaacson, author of Steve Jobs and The Innovators

"A fascinating and unexpected story."

"Browder’s true story is a heart-in-your-throat page turner, and the only close-up look I know of what it’s like to take on Putin. It is also a moving account of a man who found his calling, and ended up winning in the end."

– Bryan Burrough, co-author of Barbarians at the Gate and author of Public Enemies and The Big Rich

"A fascinating, heart-stopping account of how to take on Putin--and win. It's exciting to read about Browder's roller-coaster ride to wealth in Russia, and to learn how his compassion for Sergei Magnitsky, his murdered lawyer, inspired his memorable struggle against the venal apparatchiks of a corrupt state. This is the gripping--and absolutely true--story behind the Magnitsky Law, a signal advance in human rights."

– Geoffrey Robertson, human rights lawyer and author of Crimes Against Humanity: The Struggle For Global Justice

"This indispensable look at the brutal realities of the Putin regime is of even greater relevance thanks to Bill Browder’s unique expertise and personal experience inside the belly of the beast.”

"Bill Browder has become one of the most sincerely hated men in the Kremlin over the years--and that is something to be incredibly proud of. . . . This book shows the difference that one person can make when they refuse to back down, as told by a fellow soldier in the battle to hold Putin to account."

"[Browder's] freewheeling, snappy book describes the meteoric rise, and disastrous fall, of a buccaneer capitalist who crossed the wrong people and paid a steep price. . . The high stakes make for a zesty tale."

“[A] riveting account of Browder’s journey through the early years of Russian capitalism….Begins as a bildungsroman and ends as Greek tragedy…. ‘Russian stories never have happy endings,’ Magnitsky tells Browder, in the book’s most memorable line. Perhaps not, but they do have inspiring ones.”

“In his new book, Red Notice: A True Story of High Finance, Murder, and One Man’s Fight for Justice, Bill Browder writes the way he talks—which is always a good strategy. His autobiography is bracing, direct and honest, with only a little less swearing than you encounter in person. It is both a political thriller and an argument for morality in foreign policy that he could never have expected to make when he began his roaring career in finance.”

A True Story of High Finance, Murder, and One Man's Fight for Justice