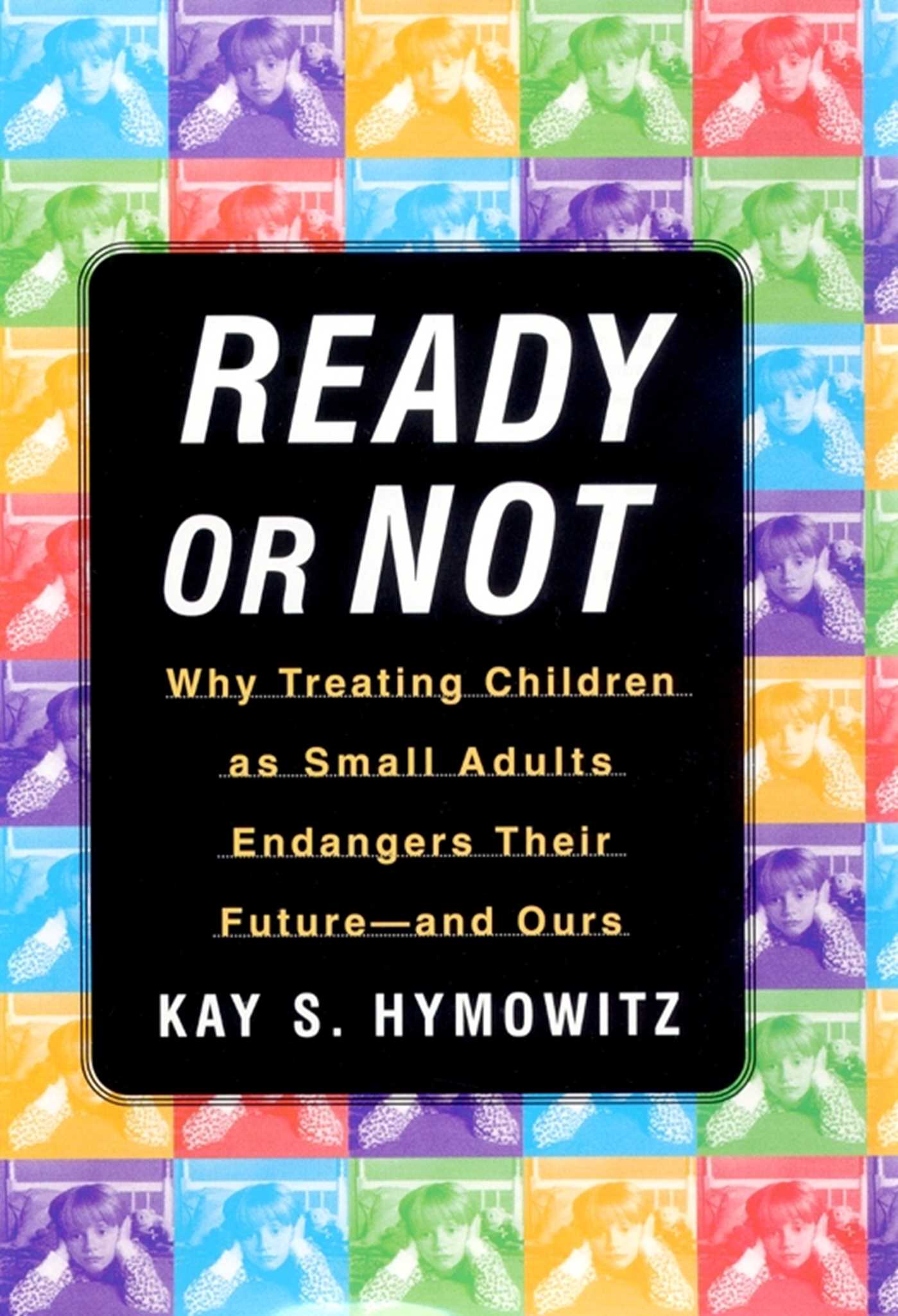 "Children today grow up so fast!" How often we hear those words, uttered both in frustrated good humor and in dumbfounded astonishment. Every day the American people hear about kids doing things, both good and bad, that were once thought to be well beyond their scope: flying airplanes, running companies, committing mass murder. Creatures of the information age, today's children sometimes seem to know more than their parents. They surf the Internet rather than read books, they watch South Park instead of The Cosby Show, they wear form-fitting capri pants and tank tops instead of sundresses; in short, they are sophisticated beyond their years. These facts lead us to wonder: Is childhood becoming extinct?

In Ready or Not, Kay S. Hymowitz offers a startling new interpretation of what makes our children tick and where the moral anomie of today's children comes from. She reveals how our ideas about childrearing itself have been transformed, perniciously, in reponse to the theories of various "experts" -- educators, psychologists, lawyers, media executives -- who have encouraged us to view children as small adults, autonomous actors who know what is best for themselves and who have no need for adult instruction or supervision. Today's children and teenagers have been encouraged by their parents and teachers to function as individuals to such an extent that they make practically every decision on their own -- what to wear, what to study, and even what values they will adhere to. The idea of childhood as a time of limited competence, in which adults prepare the young for maturity, has fallen into disrepute; independence has become not the reward of time, but rather something that our children have come to expect and demand at increasingly younger ages.

One of the great ironies of turning our children into small adults is that American society has become less successful at producing truly mature men and women. When sophisticated children do grow up, they often find themselves unable to accept real adult responsibilities. Thus we see more people in their twenties and thirties living like children, unwilling to embark on careers or to start families. Until we recognize that children are different from grownups and need to be nurtured as such, Hymowitz argues, our society will be hollow at its core.

Sylvia Ann Hewlett economist, coauthor of The War Against Parents, and president of the National Parenting Association Ready or Not is extraordinary. In this brilliantly crafted, courageous, and profoundly uncomfortable book, Kay Hymowitz shows how the sexual revolution went awry with brutal conequences for today's young people. There is not a parent among us who will not learn a great deal from this book.

William A. Galston School of Public Affairs, University of Maryland In this shrewd and forceful book, Kay Hymowitz challenges reigning orthodoxies about childrearing and reminds us of the ancient truth that good citizens and decent human beings are made, not born. Her take-no-prisoners critique should make everyone think harder about the needs of children and the responsibilities of adults in a democratic society.

Barbara Dafoe Whitehead author of The Divorce Culture, Rethinking Our Commitments to Marriage and Family Kay Hymowitz has written the most important book on Ameican childhood to come along since Reviving Ophelia. Casting a cool and critical eye across the span from infancy through the teen years, she tells the story of a revolution in childrearing: Gone is the idea that children are to be molded, shaped, and instructed by their parents and other elders; now, we are told, children are to mold themselves -- to be their own tutors, parents, teachers, and most of all, their own moral compasses. Hymowitz leaves us with an indelible and compelling picture of children in the driver's seat, careening along without the brakes, the controls, or the road map that culture is supposed to provide.

Christina Hoft Sommers W. H. Brady Fellow, American Enterprise Institute, and author of Who Stole Feminism? What happens when a society abandons its mission of handing down its wisdom and moral heritage to the next generation? Hymowitz shows the devastating effects of the currently dominant "anticultural" pedagogy. This lucid, wise, and important book deserves a wide readership.

Michael Medved coauthor of Saving Childhood and nationally syndicated radio host Kay Hymowitz has written a challenging and thoughtful book exposing some of the distortions and delusions in our current attitudes toward children.