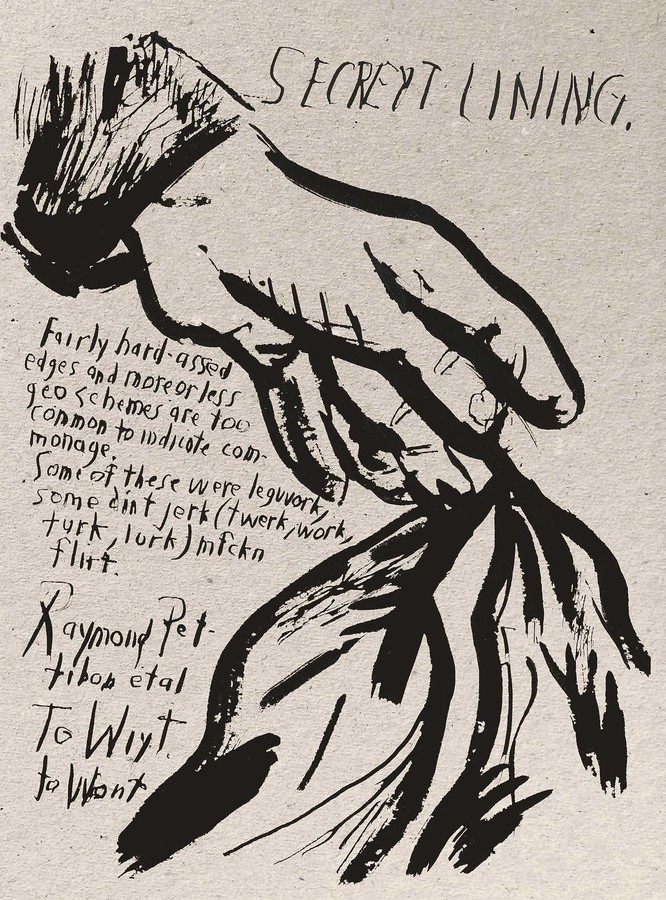 By Raymond Pettibon
LIST PRICE $45.00
PRICE MAY VARY BY RETAILER

In the summer of 2013, Raymond Pettibon took over one of David Zwirner’s gallery spaces in New York, transforming the high-ceilinged, garage-like white cube into his studio in order to prepare a show of drawings and collages within—and sometimes directly on—its walls. Titled To Wit, evoking the Middle English expression that has come to express a certain formality today and is defined as “namely,” or “that is to say,” the exhibition gave new meaning to the term “site specific,” featuring vibrant, gestural works Pettibon created in conversation with his surroundings that operated as a sort of archive, both product and record of his relationship to that space and time. Unified by their bold, vivid lines and unconventional framing, they feature allusions to a wide spectrum of American “high” and “low” culture, from violence, humor, and sex to literature, youth, art history, and sports—embodying the artist’s signature mix of social and political commentary, diary entry, and automatic drawing. This publication, presenting large color plates of the works created over that summer by Pettibon, who also produced an original drawing for its sturdy cardboard cover, explores the intricate relationship between image and language that has long fascinated the artist. Just as the works in the exhibition existed at once as art and document, so too does the book itself have the hefty, physical presence of a work of art. Extensive installation views capture the dynamic combination of visual imagery and text that has come to characterize Pettibon’s practice, and a selection of gritty black-and-white photographs by Andreas Laszlo Konrath offers an intimate glimpse into the artist’s working process. Context is provided by Lucas Zwirner, who accompanied the artist throughout this period and contributed the book’s essay, “A Month with Raymond.” As Zwirner describes it, the show functioned “as an essayistic whole held together by imaginative leaps and subtle connections which Raymond has left unexplained and uninterpreted.” That perspective is rounded out in an interview with the artist by Kim Gordon, a visual artist and musician, who first encountered Pettibon’s work in the early 1980s in Los Angeles.

By Raymond Pettibon
LIST PRICE $45.00
PRICE MAY VARY BY RETAILER