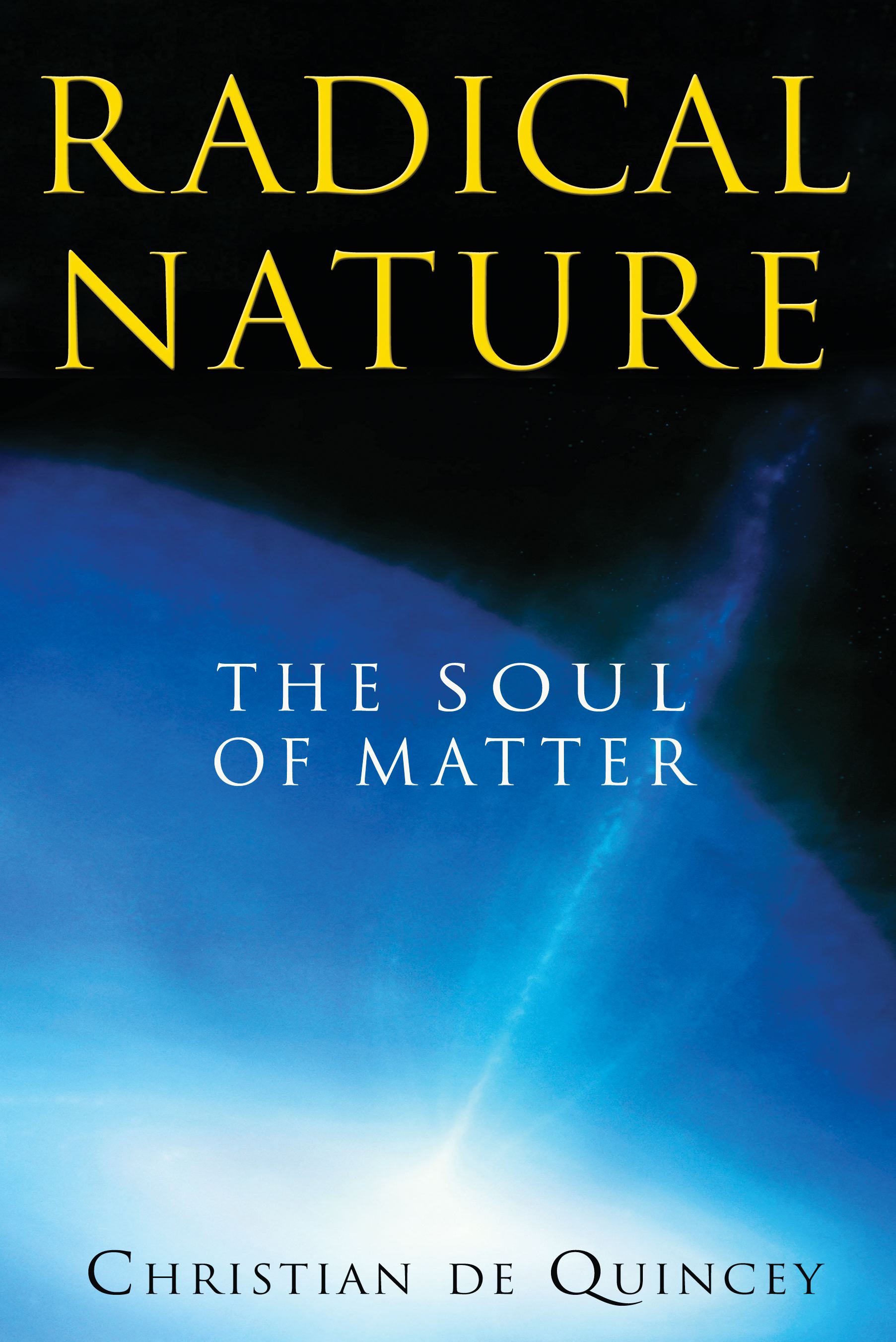 An exploration of consciousness in all matter--from quantum to cosmos

• Reveals the importance of understanding mind-in-matter for our relationships with the environment, with other people, even with ourselves

Are rocks conscious? Do animals or plants have souls? Can trees feel pleasure or pain? Where in the great unfolding of life did consciousness first appear? How we answer such questions can dramatically affect the way we live our lives, how we treat the world of nature, and even how we relate to our own bodies.

In this new edition of the award-winning Radical Nature, Christian de Quincey explores the “hard problem” of philosophy--how mind and matter are related--and proposes a radical and surprising answer: that matter itself tingles with consciousness at the deepest level. It’s there in the cells of every living creature, even in molecules and atoms. Tracing the lineage of this idea through Western philosophy and science, he shows that it has a very noble history--from before Plato to Alfred North Whitehead. He reveals that the way to God is through nature and that understanding how body and soul fit together has surprising consequences for our relationships with our environment, with other people, and even with ourselves.

New Age holistic-spiritual metaphysicians and materialist reductionists make strange bedfellows. Nevertheless, when it comes to talking about consciousness, both turn to concepts and images derived from physics. Materialists claim that consciousness is ultimately “nothing but” a form of matter-energy; New Agers often talk of consciousness or spirit in terms of “vibrations,” “waves,” “fields,” and so on, as though it were a form of subtle energy.

Why Consciousness Is Not Energy

If you tune in to someone’s “vibrations,” are you picking up some form of energy they are emitting--perhaps something we might call “psychic energy”?

It may be tempting to think so; to think of consciousness as a form of energy. But is it? What might be going on when we say we feel someone’s vibrations?

Well, one possibility is that their brain or their body could be sending out waves of energy--something, perhaps, like electricity. If so, it must be far more subtle than any form of energy known to modern science, because no physical instrument yet devised has detected any such energy.

Even though it is absurd to talk about the “size” of consciousness, some people may not think it so strange to say that consciousness (and its contents) is located somewhere in the brain. But where? No one has ever succeeded in finding any part of the brain (large or small) where consciousness is. Yes, it certainly seems to be associated, or correlated, with the brain--but it is not in the brain (not in the way your brain is inside your skull). Consciousness has a completely different kind of interiority.

Maybe, then, consciousness is a form of nonphysical energy? If that is the case, how are consciousness and energy related? We have three options.

2. Consciousness is a nonphysical form of energy. If we say that consciousness is a form of energy that is not physical, then we need to say in what way psychic energy differs from physical energy. If we cannot explain what we mean by “psychic energy” and how it differs from physical energy, then we should ask ourselves: Why use the term “energy” at all?

Note the two importantly distinct words in the phrase “feel the rush of energy . . .” On the one hand there is the “feeling” or a “knowing,” on the other, there is what is being felt or experienced (the energy). Even our way of talking about it reveals that we detect a distinction between feeling (consciousness) and what we feel (energy). Yes, the two go together, but they are not the same. Unity, or unification, or holism does not equal identity. To say that one aspect of reality (consciousness) cannot be separated from another aspect of reality (matter-energy) is not to say both aspects of reality (consciousness and matter-energy) are identical.

Consciousness is the “witness” that experiences the flow of energy, but it is not the flow of energy. We could say consciousness is the felt interiority of energy/matter. To grasp this experientially you might take a moment to pay attention to what’s going on in your own body right now. The physical matter of your body--including the flow of what-ever energies are pulsing through you--are the “stuff ” of your organism. But there is also a part of you that is aware of, or feels, the pumping of your blood (and other energy streams). That aspect of you that feels the matter-energy in your body is your consciousness.
Christian de Quincey

Christian de Quincey, Ph.D., is a professor of philosophy and consciousness studies at John F. Kennedy University; academic director for Conscious Evolution at The Graduate Institute; founder of The Wisdom Academy, offering personal mentorships in consciousness and conscious evolution; and an international speaker on consciousness, cosmology, and spirituality. He is the author of the award-winning Radical Nature, Radical Knowing, Consciousness from Zombies to Angels, and a novel, Deep Spirit. He lives in Half Moon Bay, California.

“One of the most important books on consciousness and cosmology to appear in decades. Anyone interested in questions about soul and nature, about the relationship between consciousness and the world of matter, about meaning in the universe, needs to read it.”

“Christian de Quincey is a thoughtful and well-informed writer whose articles in the Noetic Sciences Review and elsewhere represent some of the best writing in this field. Radical Nature provides a comprehensive overview to modern debates about the nature of consciousness. It will appeal to thoughtful readers.”

“Radical Nature exposes the biggest con job in the history of human thought--that matter and nature are dead, mindless, unfeeling, and disconnected from ourselves. De Quincey gives us an image that is as hopeful and fulfilling as the old view was empty and depressing. Never have we needed such a view as now.”

– Larry Dossey, M.D., author of Healing Beyond the Body and Reinventing Medicine

“Radical Nature is a unique book that gets right down to the essence of the challenges facing any science of consciousness. Essential reading for anyone interested in consciousness studies.”

– Peter Russell, author of The Global Brain and From Science to God

“Christian de Quincey illuminates a cosmological sense of consciousness with this accessible, pioneering work. His writing sparkles and the ideas sing.”

“Radical Nature is a powerful corrective to the prevalent dualisms encoded in our culture and consciousness. De Quincey articulates another way of knowing and appreciating the world that rearranges our universe in quite remarkable ways. These well-researched and thought-provoking explorations are a philosophical road map for bridging the gap between spirit and matter.”

– Suzi Gablik, author of Conversations before the End of Time

“Christian de Quincey is that rare thing: someone equally at home in analytical philosophy and in the spirit of the New Age. No one knows better how to criticize the materialist position from the inside. I thoroughly enjoyed reading Radical Nature. If anything can shake the current scientific complacency about the mindlessness of matter, this will.”

– Nicholas Humphrey, Ph.D., author of A History of the Mind and Leaps of Faith

“Aboriginal peoples of the world (wherever they’re still found intact) know that consciousness goes ‘all the way down.’ They perceive this as directly and as intuitively as we perceive the humor in a joke. For this reason, it’s not really something we can ‘discover’ any more than we ‘discovered’ America. Nonetheless, for us latecomers (for whom the concept is a stranger), Christian de Quincey has provided a delightfully accessible foundation for its rediscovery.”

“A brilliant and much-needed book. De Quincey has produced a deep work that is both intellectually satisfying and spiritually reunitive.”

“Radical Nature is a serious, philosophical-scientific treatise that addresses the greatest philosophical issue of all times and throws light on it. The concept of matter as inert and ‘dead’ was indeed an exception in the long history of intellectual thought, but it came to be equated with self-evident truth in the modern mind. De Quincey shows that this is an aberration--that the universe is far more complex, vital, and ‘interesting’ than standard materialistic science envisages. It is time to return to the concept that there is consciousness in nature, as de Quincey says, ‘all the way down.’ The rediscovery of this perennial insight lends both fresh meaning to our individual existence and a fresh impetus to changing our attitude to nature from exploitation to participation.”

– Ervin Laszlo, Ph.D., author of WorldShift 2012 and Science and the Akashic Field

“A breakthrough in understanding humanity’s place in the community of beings. De Quincey brings together a depth of philosophical expertise with a compassionate understanding of our history. He charts a worldview that is fully in accord with the latest scientific discoveries of the role of mind in the cosmos.”

“Radical Nature is thoughtful and filled with facts that clearly refute materialism and the modern scientific outlook on life. He [Christian de Quincey] deftly outlines the paradox of consciousness, including its conceptions in history back to the ancient Greeks.”