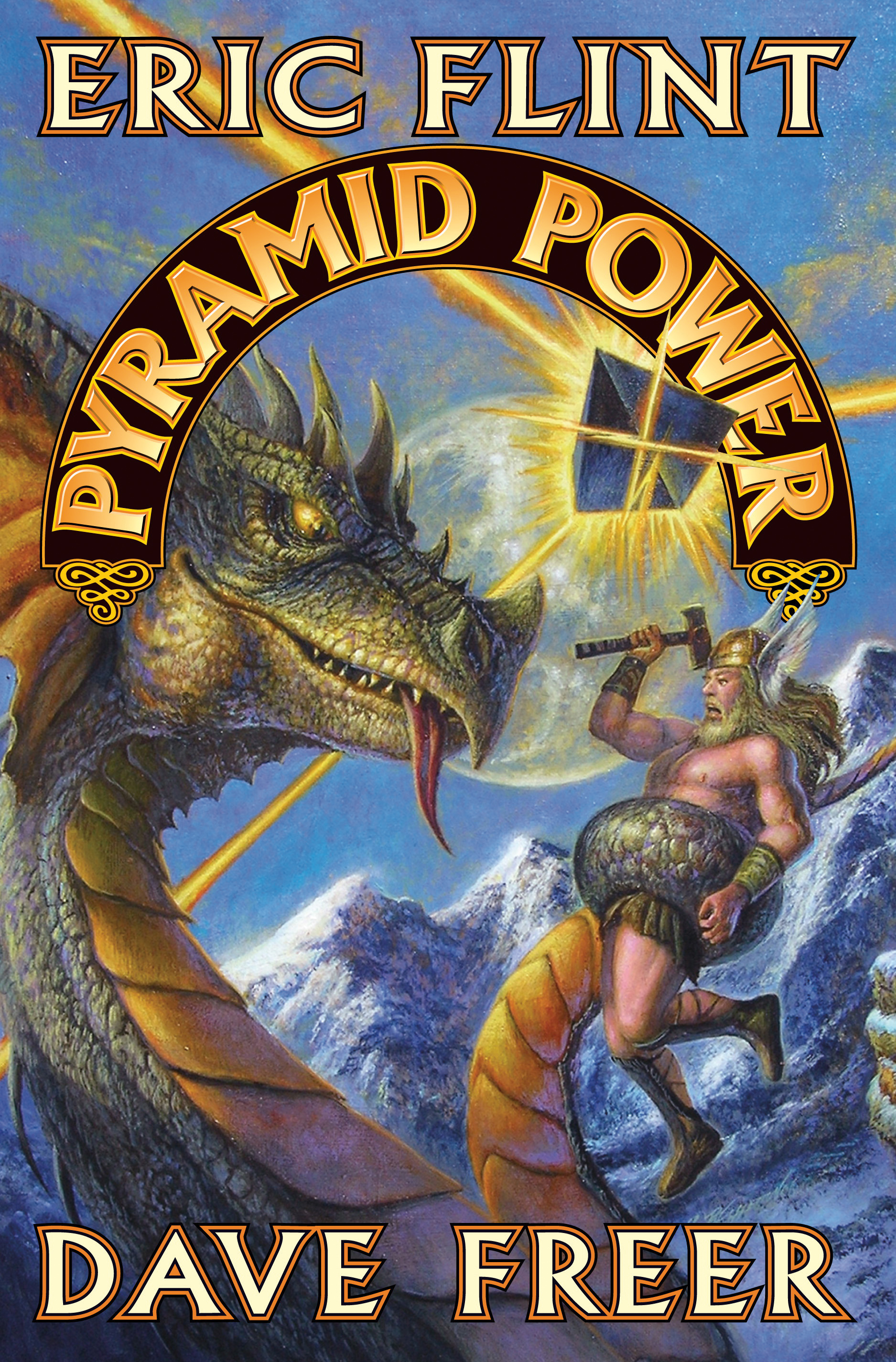 2.  Flint and Freer's earlier collaborations have had strong sell throughs.

3.  Freer's solo novel, A Mankind Witch, garnered rave reviews, such as a starred review in Publishers Weekly, which praised it for "ripsnorting action and an ingenious plot..."

4.  Flint's other bestselling work includes collaborations with David Weber (Crown of Slaves and 1663) and Mercedes Lackey (The Shadow of the Lion, The Rough Magic and The Wizard of Karres).

The Pyramid is baacckk! Well, actually, it never went away—but it had seemed to be inactive, still sitting in the middle of Chicago but no longer growing and wiping out buildings as it grew. The Krin device would have been thwarted, if things had been left as they were—but a V.I.P., who knows too many state secrets to be allowed to be missing, was left behind in the world of Greek mythology. So a power-mad Washington bureaucrat has press-ganged several of the survivors of the first excursion into the pyramid’s worlds and sent them, along with a team trained in “surgical strikes,” to either bring back the V.I.P. or, if that’s impossible, terminate him with extreme prejudice.

Unfortunately, instead of returning to mythological Greece, they find themselves in the world of the Norse gods. Even if they manage to survive the enmity of Odin and his warriors, can manage to free Loki (a potential ally) and can keep the hard-drinking thunder-god Thor off the sauce long enough to help them, Ragnarok is coming, with the end of the world. And even a hard-headed maintenance man with his trusty toolkit may have trouble fixing that problem!

Eric Flint is a modern master of alternate history fiction with 3 million books in print. He’s the author/creator of the multiple New York Times best-selling Ring of Fire series, starting with first novel 1632. With David Drake he has written six popular novels in the Belisarius alternate Roman history series, and with David Weber he has collaborated on 1633 and 1634: The Baltic War, as well as four novels in Weber's Honorverse series. Flint was for many years a labor union activist. He lives near Chicago, Illinois.

Dave Freer is an ichthyologist turned author who lives on Flinders Island (between mainland Australia and Tasmania) with his wife, four dogs and four cats, and two sons. He has coauthored a range of novels with Eric Flint (Rats, Bats and Vats, The Rats, the Bats and the Ugly, Pyramid Scheme, Pyramid Power, and Slow Train to Arcturus), with Mercedes Lackey and Eric Flint (The Shadow of the Lion, This Rough Magic, The Wizard of Karres, Much Fall of Blood, Burdens of the Dead, and Freer’s solo entry in the series, A Mankind Witch) as well as writing the Dragon’s Ring fantasy novels Dragon’s Ring and Dog and Dragon.