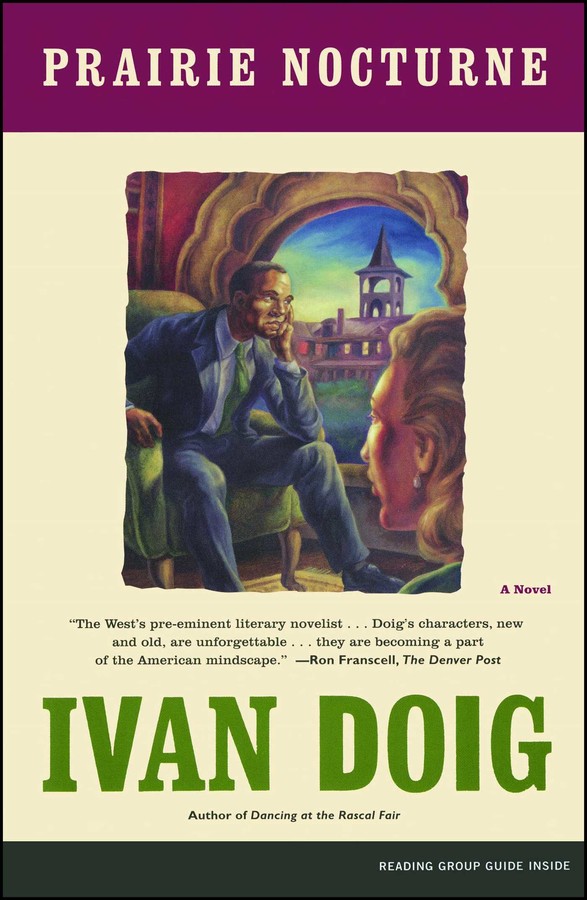 Prairie Nocturne is the epic saga of two former lovers sired in the pages of Ivan Doig's acclaimed Montana Trilogy. Susan Duff -- the bossy, indomitable schoolgirl with a silver voice from Dancing at the Rascal Fair-- has reached middle age alone, teaching voice lessons to the progeny of Helena's high society. Wesley Williamson, young married heir to the Double W cattle empire, has been forced out of a political career as a result of his affair with Susan having become known. Years later, Wes and Susan have reunited to share in an extraordinary goal: launching the singing career of Monty Rathbun--a man on the wrong side of the racial divide. In this triumph of sure-footed storytelling, motives and fates dangerously entangle.
Set in Montana, France, Scotland, and New York during the Harlem Renaissance, Prairie Nocturne is a deeply longitudinal novel that raises everlasting questions of allegiance, the grip of the past, and the cost of passion.

DISCUSSION POINTS
1. The Overture to the story is an excerpt from Susan's diary, ostensibly discovered in the year 2025: "A story wants to be told a certain way, or it is merely the alphabet badly recited. At the right time the words borrow us, so to speak, and then out can come the unsuspected sides of things with a force like that of music. This is the story of the three of us, which I am more fit to tell now than when I was alive." What do you suppose the author intended to convey with this statement? Did it hold different meaning for you after you finished reading the story?
2. Did the passages from Susan's journal give you further insight into her character? Does keeping a diary give her greater clarity about her own life and the people in it? Why does Susan give her diary to Wes?
3. The reader first sees Wes when Susan does -- when he lets himself into her house in the middle of the night with a spare key he has been keeping for four years since they last parted. What does this opening scene reveal about Wes? How about Susan? Why does Susan so readily allow Wes back into her life?
4. Do you think Susan is the strongest character in the novel? Why or why not? Wes muses that "soldier Samuel Duff was too fearless for his own good" (page 110). Can the same be said of Susan?
5. Wes not only encourages Monty's dream of becoming a professional singer but also provides the means for him to fulfill that ambition. Discuss Wes's motivations for aiding Monty. Did your opinion change when you read the story's ending, specifically Wes's conversation with Susan about Monty's father?
6. In one instance Wes laments that "once more he was helpless against too much memory" (page 103). Cite examples of how events in the past continue to impact the characters.
7. Compare the two main settings in the story -- the Montana prairie and New York City. Aside from geographical ones, what are the major differences? Do the characters act differently in each place?
8. Discuss the issue of race in the book, particularly in the context of the time. Monty has to deal the most obviously with racial prejudice, but are there other instances of prejudice in the book? What accounts for Wes's vehement dislike of the Ku Klux Klan, which Monty in particular notices? In Harlem, how is the race issue reversed?
9. A writer has to make various decisions in the creation of a book. One is the method of narration, whether to make the "voice" of the story the invisible author's own or first-person by a protagonist. How might Prairie Nocturne have been different, in each case, if Wes, Monty, or Susan had been made the narrator?
10. Susan's relationships with both Wes and Monty go against the standards of society -- Wes because he is married and Monty because of the color of his skin. Why do you suppose Susan enters into these relationships that are destined to have complications? In what other aspects of her life does Susan defy convention?
11. Susan and Monty share a love of music and singing. What else draws them together? From their first singing lesson to the concluding scene at Carnegie Hall, how does their relationship progress from student and teacher to something more?
12. Why do you suppose Wes and Whit never told Monty the truth about his father's death? Why does Susan also opt for silence about it, even burning Mose Rathbun's hat? Does Monty deserve to know the truth?
13. Discuss the arc of Susan and Wes's relationship. In one instance Susan "felt a last genuine pang for Wes, and what might have been if they had dined together here when she was in her Village days and he was unattached" (page 323). If they had met before Wes's marriage, do you think they would have had a more sustained relationship?
14. Phil Sherman tells Wes there is speculation that Susan and Monty have romantic feelings for each other. "[Wes] hadn't foreseen, hadn't headed this off in time, hadn't calculated that their courage could be greater than his" (page 339). How, as Wes believes, is Susan and Monty's courage "greater than his"? Does this apply in any other ways in the story?
15. When Monty suggests during the rehearsal at Carnegie Hall that Susan act as his accompanist, Wes is the one who tips the scales. Does he realize what he's setting in motion, both for Susan and Monty as well as repercussions he might encounter?
16. Ivan Doig has said, "If I have any creed that I wish you as readers...will take with you from my pages, it'd be this belief of mine that writers of caliber can ground their work in specific land and lingo and yet be writing of that larger country: life." How does the land and lingo in the world of Prairie Nocturne reflect larger, more universal themes?

Ivan Doig (1939-2015) was a third-generation Montanan and the author of sixteen books, including the classic memoir This House of Sky and most recently Last Bus to Wisdom. He was a National Book Award finalist and received the Wallace Stegner Award, among many other honors. Doig lived in Seattle with his wife, Carol. Visit IvanDoig.com.

"Ivan Doig never disappoints those who love good writing, and Prairie Nocturne is Doig at his best."
--Tony Hillerman, author of The Wailing Wind and The Sinister Pig

"One of [Doig's] most ambitious projects yet with its complexity of social and cultural issues nestled in the deceptive serenity of the American West."
--Jennie A. Camp, Rocky Mountain News

"Ivan Doig has staked a claim as one of Montana's essential literary witnesses."
--Grace Lichtenstein, The Washington Post

"The West's pre-eminent literary novelist...Doig's characters, new and old, are unforgettable...they are becoming a part of the American mindscape."
-- Ron Franscell, The Denver Post