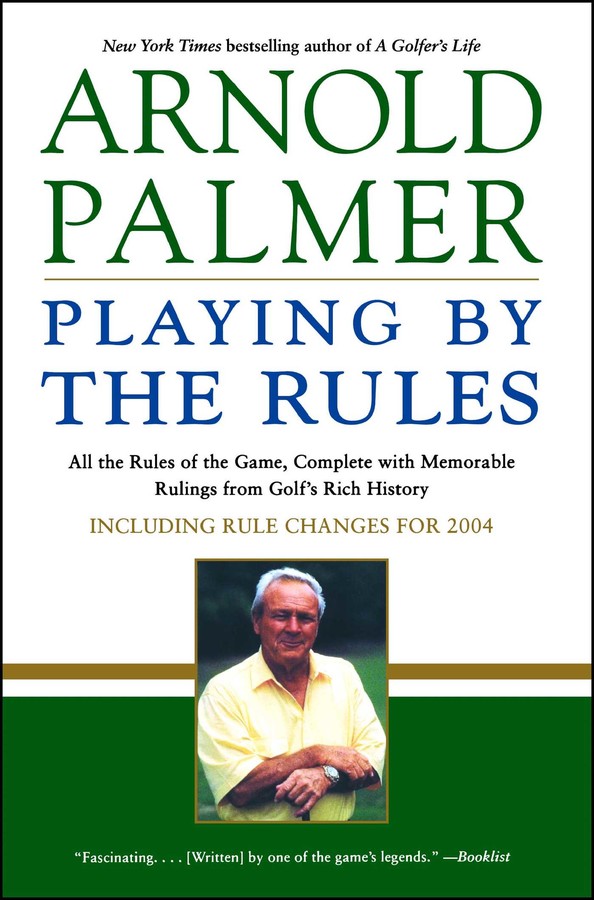 Playing by the Rules

All the Rules of the Game, Complete with Memorable Rulings From Golf's Rich History

By Arnold Palmer
With Steve Eubanks
LIST PRICE $17.95
PRICE MAY VARY BY RETAILER

When exactly is a ball considered "lost"?
When is a "drop" allowed?
How does one define "slow play"?
These are just a few of the common -- and not-so-common -- questions answered by golfing legend Arnold Palmer in this comprehensive illustrated guide to the rules of the game. Despite the fact that golf has fewer rules than sports like baseball or football, it is a contest of honor, and all players, from tour professionals to weekend hackers, respect the rules. But, as Palmer points out, sometimes the rules are a little confusing -- and from time to time, even the pros are puzzled.
Here, in easy-to-follow language, one of golf's greats explains exactly what every golfer should know about the way the game should be played. Also included are anecdotes Palmer has culled from his own career, as well as the infamous moments in golf history that have helped define and test each rule.
If you're one of the millions of avid golfers who take to the links every year, need a clear explanation of all the rules of the game you love, and don't want to be left speechless when an argument over the "coefficient of restitution" pops up, then Playing by the Rules is an invaluable guide you'll refer to time and again.

I was playing a round of golf with some friends recently when one of my partners brought up a highly publicized incident he'd seen on television.

"Arnie," he said, "how on earth did Ian Woosnam end up with fifteen clubs in his bag at the British Open?"

"Happens more than you think," I said. "You're on the range fooling around with different clubs and you walk to the tee with too many in your bag. Of course, most of the time your caddie counts clubs before you tee off and you catch the mistake before it costs you two shots."

"Has it ever happened to you?" my friend wanted to know.

"No, I always check the bag myself. Ian relied on his caddie, and the caddie let him down."

"So, what if the caddie had kept his mouth shut? Could they have played the whole round without anybody finding out? And what if they'd played more than one hole? How big would the penalty have been then?"

Before I could answer those questions, another member of our group joined the discussion. "Who came up with the idea of only fourteen clubs anyway?" he said. "Why not fifteen, or sixteen, or twelve?"

Finally I threw my hands up, and we all had a good laugh.

Questions like that come up all the time in my foursome, but I'm not alone. Every day at golf courses all over the world questions about the rules of golf are being asked and debated in locker rooms and on the first tees and, as was the case with my friends, one question usually sparks two or three more.

I've played competitive golf for over half a century now, and I still love it as much today as I did as a child growing up in Latrobe, Pennsylvania. But even after all these years playing thousands of competitive rounds, I still run across new and fascinating nuances in the rules of golf. As much golf as I've played over the years, you would think I had seen every head-scratching, eyebrow-raising, stranger-than-fiction rule scenario there is, but every so often a situation comes along that leaves me saying, "Hmm, I wonder how that's handled under the rules." That's one of the reasons I thought a book about golf rulings -- the quirky situations that have come up over the years and how they were handled by golf's ruling bodies -- would make an interesting read.

Heaven knows I've also been involved in enough controversial rulings in my own career. Some of my more highly publicized and controversial rules situations continue to be debated in grill rooms around the world forty to fifty years after the fact, while other rulings I've been involved in barely warrant the attention of the professional staff at Latrobe Country Club (where I play most of my summer golf) or the Bay Hill Club in Orlando where I spend most of my winters. Still I'm asked about various rulings, with friends and acquaintances saying things like, "Arnie, that drop you took in the U.S. Open back in such-and-so year, what was the situation there again?" or "Arnie, didn't you have a penalty in this-or-that tournament for breaking rule whatever?"

From what I've seen over the years, golfers don't have a passing interest in the rules of the game: They are obsessed by the rules. Just look at the number of phone calls and e-mails the PGA Tour receives regarding rulings. A golf fan at home turns on the television and sees what he thinks is a violation of the rules, and he immediately calls the tournament director to report it. With so much golf on television these days, that sort of thing happens almost every week now. Sometimes the fans are right. Sometimes the pros make mistakes that are caught by the camera. But most of the time the golf fans watching at home are just like the average golfers in my foursome or in foursomes all over the country: They know just enough about the rules to be dangerous.

It should be easy. There are only thirty-four rules in our game -- fewer than baseball, basketball, football, soccer, rugby, and cricket -- and the rule book is available to anyone who wants it. You don't have to be an umpire or official to own a copy of the Rules of Golf as published by the USGA or the Royal and Ancient Golf Club of St. Andrews. In fact, most golf shops have several versions lying around, and anyone who has a question can ask his local pro.

But not every rules situation is simple and straightforward. Golf is a game of only thirty-four rules but a million variables. Average golfers can't be expected to know all the scenarios in the game. Most touring pros don't know everything there is to know about the rules. The USGA give rules seminars around the country to educate and inform the golfing public about the rules, but even rules officials can make some bad rulings in the heat of the moment.

Golf has always been, and hopefully will always remain, a gentleman's game. Thousands of rounds are played every day at country clubs, resorts, and public courses around the world without benefit of umpires, referees, judges, or officials. The rules of our game fascinate us because we are our own umpires. Golfers are self-policing, regularly calling penalties on themselves for rules infractions like carrying too many clubs. Why did Ian Woosnam's caddie tell his boss about the 15th club in the bag? Because it would never occur to him to do anything else. The integrity of the game is more important than any single tournament or any one player, and everyone who plays our game does so under that same code of honor.

Rules and rulings in golf are what make our sport unique. The fan sitting at home can relate to the penalty stroke a tour pro is taking for hitting his ball into a water hazard, because average golfers incur those same penalties every day.

Just as players and rules officials make occasional mistakes, the rules themselves aren't perfect either. The rule book wasn't handed down by the Almighty on stone tablets. It's written by men and women who love the game. Those men and women also edit and revise the rules every four years, making subtle changes to reflect any situations that might have occurred in which the existing rulings were vague or fuzzy. Some of the examples I've used in this book prompted changes in the rules in their time, and others will likely be debated in future meetings of golf's ruling bodies.

In presenting this book to you, I hope to make certain golf rulings clearer and provide you with a practical interpretation of why certain rules work the way they do. By going down memory lane with me, rehashing some famous and some not-so-famous rulings, hopefully you will gain a better understanding of how and why the rules of golf work the way they do. Hopefully the lessons you learn will help you enjoy the game.

If I'm successful on that front -- if anything you pick up in these pages makes the game a little more fun -- then the time and effort that has gone into this book will have been worth it.

Enjoy perusing the rules and rulings, but more importantly, go out and enjoy the game.

Playing by the Rules

All the Rules of the Game, Complete with Memorable Rulings From Golf's Rich History

By Arnold Palmer
With Steve Eubanks
LIST PRICE $17.95
PRICE MAY VARY BY RETAILER