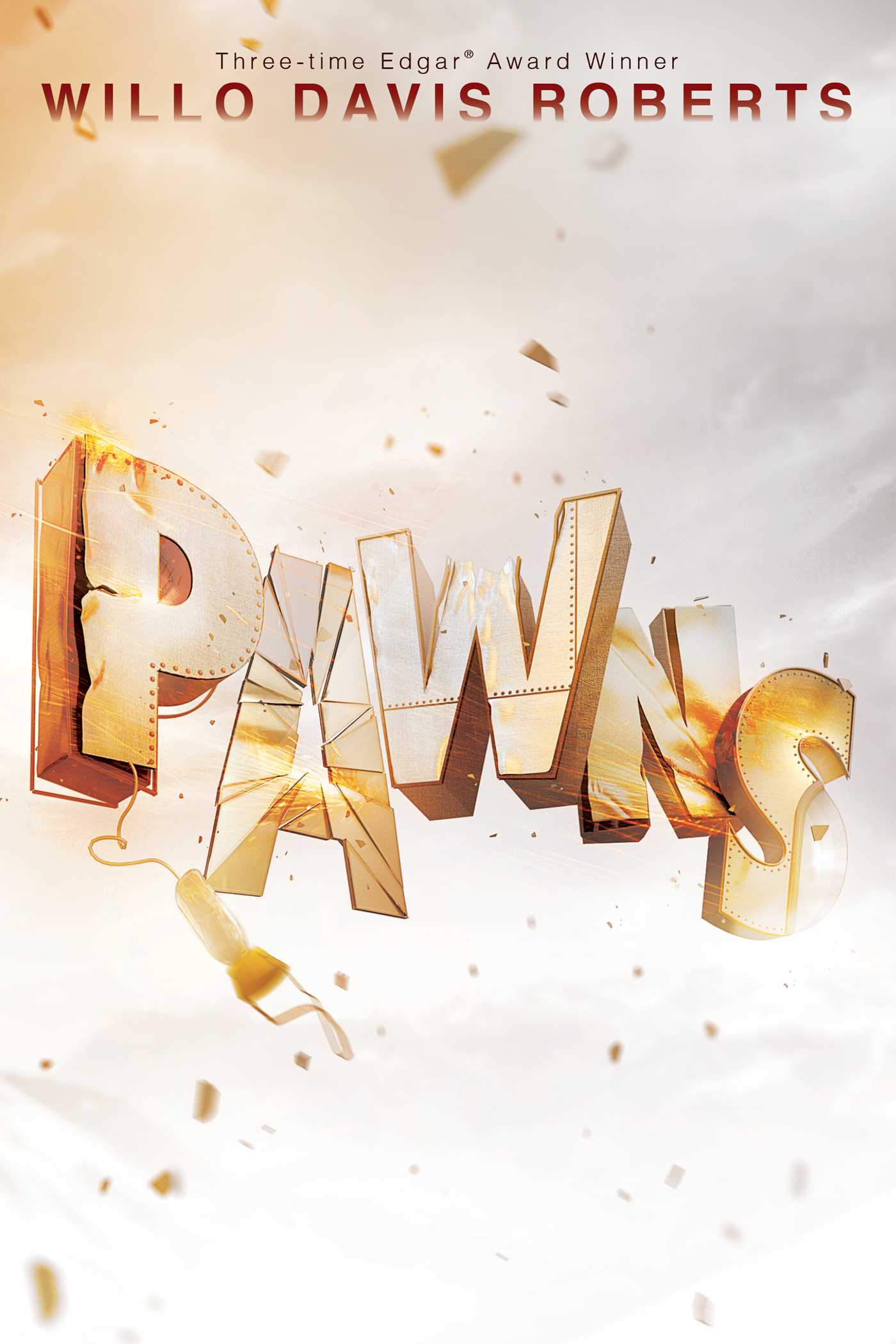 Teddi is determined to protect the elderly neighbor who took her in after she lost her parents in this fast-paced mystery from Edgar Award­–winning author Willo Davis Roberts.

Teddi has recently been orphaned and she now lives with her kindly, older next door neighbor, Mamie. The times they share and the safety Teddi feels are precious. Then trouble appears in the form of Dora, Mamie’s daughter-in-law. Not only did Mamie not know that Dora was expecting a baby, she didn’t even know that her recently dead son had been married. Something seems out of sync and Teddi is determined to find out why.

Teddi put down her book and gave herself a cursory glance in the hall mirror as she passed it. Looking at your own image might be a primary preoccupation for many fourteen-year-olds, but she didn’t like her looks all that much. She was too skinny, too pale, and her dishwater-blond hair was no help.

She hesitated, hoping maybe Mamie would show up to answer the summons, but there was no indication that she was even in the house. Probably out in back, weeding the garden, Teddi thought.

She reached for the knob and opened the door.

A girl stood there. Older than Teddi, maybe nineteen or twenty, at a guess. Rather pretty, in a washed-out way, was Teddi’s initial evaluation. Pale brown hair, oddly pale brown eyes as well. The most notable thing about her was that she was in an advanced stage of pregnancy.

The girl smiled a bit uncertainly.

“Yes?” Teddi asked. “We’re not interested in buying anything.”

The smile became tremulous. “I’m Dora,” she said, twisting her hands together over her bulging stomach.

Teddi stared at her blankly. She’d never heard Mamie mention anyone by that name.

“Dora,” the girl repeated nervously. And then, realizing that something more was necessary, she added, “Dora, Ricky’s wife.”

For a few seconds the words did not register. And then, as realization slowly dawned, Teddi drew in a sharp breath.

There was a roaring in her ears, and her vision dimmed momentarily. She held on to the doorknob, bracing against the dizziness that swept over her. Her mouth was so dry, she could barely form the words.

Dora’s smile wavered. “I don’t think I know who you are. Ricky didn’t have a sister, did he?”

“Oh, and you’re visiting Mamie?” Dora didn’t wait for a reply, but bent her knees enough to pick up the two suitcases Teddi hadn’t noticed until now. “How nice of you. I hope Mamie—Mrs. Thrane—is here?”

She took two steps forward, without being invited, and involuntarily Teddi stepped backward, out of her way. This allowed Dora to enter the house, where her heels clicked on the hardwood floor.

Behind her, Mamie’s voice faltered to a stop upon seeing that they had a visitor. “Oh. Who’s this?”

Teddi’s vision had cleared, though she still felt she was swallowing cotton.

Even then, she would swear later, she had a premonition of disaster in the making, though she couldn’t have explained why. Not exactly.

Teddi tried to speak, but it was Dora who made it first. “Mrs. Thrane? Mamie?”

“Yes,” Mamie said, approaching them, peeling off a gardening glove. A tentative smile touched her lips.

“I’m Dora,” the girl said, moistening her lips while Teddi remained frozen, unable even to close the front door.

For long seconds Mamie stood there, her graying hair slightly mussed, the knees of her faded jeans revealing dirt and moisture, her own smile congealing on her lips. Her gaze swung toward Teddi, evaluating her reaction, and then her ungloved hand crept to her throat.

It was a good thing there was a chair beside the hall table. Mamie sank onto it as the blood drained from her face.

When Mamie, too, was stricken, Teddi threw off her own shock. “I’ll get you a glass of water,” she offered, and fled past the newcomer toward the kitchen.

Behind her she heard Mamie say, “I’m afraid I don’t understand.” And then the girl’s voice, full of concern: “You mean he didn’t tell you about me?”

Mamie’s words were tremulous. “I’m afraid I misunderstood you. You couldn’t have said you were Ricky’s wife.”

In the kitchen, Teddi turned on the cold water tap and filled a glass, then hurried back to Mamie with it.

The older woman seemed incapable of lifting a hand to take it, so Teddi held it for her. Mamie took only a few sips.

Dora had put down the suitcases and was again twisting her hands together. Her eyes sought Teddi’s.

“I didn’t expect to be a horrible surprise to her. Ricky never told me he’d written to his mother about me, but I assumed he had. . . .”

Dora bit her lip. “Yes. Only twenty-six years old, and to be snuffed out like that, in an instant. Please, Mamie—may I call you that, or would you prefer that I call you Mother? I don’t have a mother of my own, not since I was twelve, and I—” She faltered, then deliberately firmed up her voice. “I was hoping to find a family here. . . .”

Mamie’s throat worked before she could speak. “My . . . my other daughter-in-law calls me Mamie,” she said.

“Mamie, then.” Dora gave them a watery smile. “It’s such a sad way to meet, isn’t it? Not at all the way I’d imagined. Well, I wonder if I could sit down? I walked the last few blocks from the bus stop, and I get tired pretty fast these days.” For a moment her hand rested protectively on her bulging stomach.

Mamie was pulling herself together with an effort. “Yes, of course. Let’s go into the living room.” She reached out a hand to Teddi, and it was ice-cold as Teddi helped her to her feet.

They made their way into the cozy sitting room, full of old but comfortable furniture. Teddi suddenly saw it through a stranger’s eyes. Shabby, it was. A little untidy, with her own book lying on the end of the couch, and today’s paper on the floor beside Mamie’s chair.

Mamie almost slid into her rocker, and for once she didn’t immediately put her feet up onto the stool. It was as if the effort was too much for her.

Dora had brought her luggage with her, putting both cases down on the edge of the rug at the doorway. She sank onto the couch at an angle from Mamie’s chair, then looked up at the hovering Teddi.

“Thank you, Teddi, is it? I think Mamie and I can manage by ourselves now, if you want to run on home.”

Teddi sucked in an uncomfortable breath. “I am home. I live here now.”

“Oh.” Dora was disconcerted. “I’m sorry, I thought you were a neighbor.” She forgot about Teddi, and leaned forward to cover Mamie’s hand where it rested on the arm of the rocker. “We’ll have to comfort each other,” she said. “It’s so hard to believe, isn’t it? That Ricky’s gone. He was so . . . so vital. . . .”

She stopped, groped in the pocket of her maternity dress for a handkerchief, and pressed it to her face, overcome with emotion.

“We held a memorial service for him last week. Thursday,” Mamie said faintly. “At our church, where he used to go to Sunday school when he was a little boy.”

The handkerchief came down and was twisted between Dora’s fingers. “It’s such a pity his body wasn’t recovered. That there can’t even be a grave to visit.”

“My . . . my husband doesn’t have a grave, either,” Mamie managed. “He wanted to be cremated and have his ashes scattered up in the mountains, where he loved to hike.”

“Does it bother you,” Dora asked earnestly, “that he doesn’t have a grave?”

Dora nodded. “Yes. I can see that. How sad, to lose first a husband and now a son.” She drew in a deep breath, and again patted her belly. “I hope . . . I hope it will be some consolation to you now that you will have a grandchild. It’s a boy. We talked about naming him and decided on Daniel Richard Thrane, and I guess that’s what I’ll go with. Unless you’d particularly like his first name to be the same as his father’s? A little Ricky?”

Teddi felt as if she were being pelted with stones, none of them big enough to knock her over, but leaving her bruised. She wanted to take Mamie off in another room, to hug her, to give her time to assimilate this unexpected turn of events.

There was no question but that all the pain had come rushing back, the pain that had begun the moment the call had come from the airline and had lasted right on through the services at the church, where old friends from years back had hugged Mamie and squeezed her hands, and murmured words of condolence. They had brought food to the house, just as other neighbors had done when Teddi’s mother had died. And now, when the grief hadn’t even really subsided yet, it was being resurrected.

The idea of a grandson was an unexpected one. Teddi felt rocked back on her heels, and she could see that Mamie was considerably more shaken than she was herself.

Dora was waiting for a response, but as yet Mamie was incapable of deciding on a name for a grandchild she’d just learned about. Dora looked up at Teddi.

“I wonder if I might use your bathroom? I’m at a stage where I need to go about every half hour. That’s normal during pregnancy.”

“Yes, of course,” Teddi said, and led the way down the hallway.

She decided she didn’t need to wait for Dora to relieve herself. She could easily find her way back to the living room. Teddi returned to Mamie’s side and sank onto her knees at Mamie’s feet.

Mamie’s lips were trembling as she closed a hand around Teddi’s when it was offered.

“Ricky’s wife,” she said. “I never dreamed he had gotten married. I can’t imagine why he didn’t write and tell me that.”

“Ricky never wrote very often,” Teddi reminded her. Yet from the look of Dora, she was very close to delivering her baby, which meant that the marriage had probably taken place quite a while ago. And there were telephones. Wouldn’t you think Ricky would have been proud enough to have called his mother and told her that she was to become a grandmother?

Down the hallway, the toilet flushed.

Teddi wished desperately that she could think of something helpful to say, but all she could do was cling to Mamie’s hand.

Clearly Dora had come to stay. The two suitcases stood as silent testimony to that. And she’d said, “I was hoping to find a family here.”

What did that do to Teddi’s own prospects for staying here in Mamie’s house?

Willo Davis Roberts wrote many mystery and suspense novels for children during her long and illustrious career, including The Girl with the Silver Eyes, The View from the Cherry Tree, Twisted Summer, Megan’s Island, Baby-Sitting Is a Dangerous Job, Hostage, Scared Stiff, The Kidnappers, and Caught! Three of her children’s books won Edgar Awards, while others received great reviews and other accolades, including the Sunshine State Young Reader’s Award, the California Young Reader’s Medal, and the Georgia Children’s Book Award.