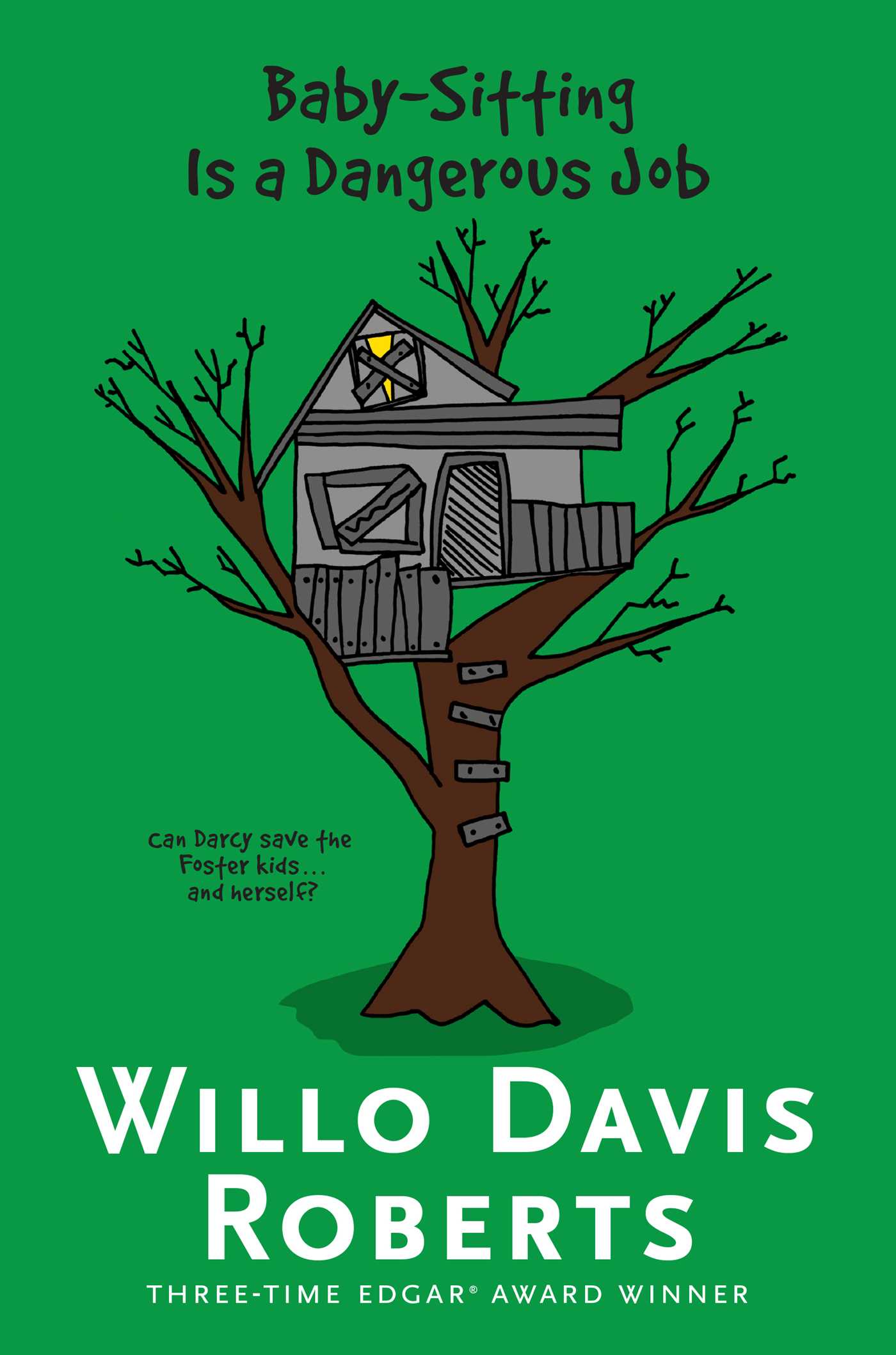 A bestselling classic mystery about a baby-sitter who is kidnapped along with the three kids she is watching from three-time Edgar Award–winning author Willo Davis Roberts. “A solid adventure with more than a few spine-tingling moments” (Booklist).

From the moment she set eyes on the three Foster kids, Darcy knew being their baby-sitter would be no picnic. But the pay was twice her usual rate, and the job was only for a few hours a day—surely an experienced baby-sitter like her could handle it.

But Darcy hadn’t counted on the mysterious things that started happening at the Fosters’ home after she took the job. She did everything a good baby-sitter was supposed to do: she didn’t let the stranger claiming to be from the gas company into the house and she called the police when the burglar alarm went off in the middle of the afternoon. But that wasn’t enough to prevent a baby-sitter’s worst nightmare from coming true. Now it’s up to Darcy to rescue the Foster kids—and herself—from three ruthless kidnappers.

Baby-Sitting Is a Dangerous Job Chapter One
I knew the minute I saw the Foster kids that I wasn’t going to like being their baby-sitter.

There were three of them. Shana was the little one, about two and a half, and she was cute. I thought maybe she’d be all right. She had soft blonde hair and big blue eyes, and she said my name, plain as anything, right after me when her mother asked me what it was. “Darcy Ann Stevens,” Shana echoed, and leaned against my leg.

“And do they call you Darcy Ann, or just Darcy?” Mrs. Foster asked, smiling. Only she wasn’t just Mrs., she was a psychiatrist, and my friend Irene said everybody called her doctor. I wasn’t sure how I was supposed to address her, so I hadn’t called her anything at all.

I looked at the middle one, whose name was Melissa. She was four, and she was cute, too; her brown hair curled, but she stuck out her lower lip and looked at me with those big dark eyes and said, “I don’t want you for a sitter.”

Mrs./Dr. Foster smiled again. “Don’t be rude, dear. Of course you’re going to like Darcy as a sitter. And this, Darcy, is Jeremy. He’s six.”

Jeremy, too, had dark hair and the same dark eyes. When his mother looked away from him, he stuck his tongue out at me. He didn’t say anything.

“I understand you’ve had quite a bit of experience baby-sitting, Darcy,” Mrs./Dr. Foster said. She turned directly toward me on the big oatmeal-colored couch, and Jeremy, behind her back, stuck his thumbs in his ears and wiggled his fingers at me. “You’re how old? Fourteen?”

“Well, nearly,” I said. “I’m thirteen and a half.” I was only stretching it by three months. “Yes, I’ve been babysitting since I was eleven.”

“Eleven,” she echoed. “That’s very young to start. You must be quite mature for your age.”

“Yes,” I agreed. “Everybody says so. It probably comes from having two little brothers. I helped take care of them, too.”

Now Jeremy had a finger in each corner of his mouth, stretching it to make a grotesque face. Melissa looked at him and copied his actions. I was already having second thoughts about this.

In the first place, I’d never taken on three kids before. And none of the children I’d baby-sat had ever lived in a place like this, either.

“Well,” Mrs./Dr. Foster said. “Your references are certainly good ones.” She handed the letters back to me, and I rested them on my knees. “Shall we see you tomorrow afternoon, then, Darcy? Say at one o’clock? I can’t tell you how happy we are to have found someone reliable to see to the children while Mrs. Murphy is having her root canals done. I’m sure they’re going to love you.”

Jeremy had his tongue out again, wiggling it like a serpent’s tongue; I wouldn’t have been surprised if there had been a little steam with it, or a blast of fire. Melissa watched him to see what he did and imitated it a moment later.

“We didn’t discuss pay, did we?” Mrs./Dr. Foster said, hesitating as we reached the front door. She named an hourly rate that was twice what anybody else paid me, and I swallowed the words I’d almost been ready to say. Maybe you’d better find someone older, more experienced with three kids. “Will that be satisfactory?” she asked. “Of course, we always pay a bonus for a job well done.”

A bonus. On top of twice my normal hourly rates. I ignored Jeremy’s wicked little face and forced myself to smile. “I’ll be here tomorrow at one,” I agreed.

My brother Tim was waiting for me at the curb in his beat-up old Volkswagen. He leaned across and opened the door for me—because it sticks, not because he was polite—and I slid in.

He put the car in gear and turned the key, but didn’t drive away. He was looking at the Foster house. “Pretty ritzy place. What’s it like inside?”

“Fancy,” I said. “There’s a swimming pool out back. I saw it through the patio doors.”

He lifted his eyebrows. Tim looks like the rest of us in the Stevens family. We all, except Mom, have red hair and freckles. Her hair is auburn, and I keep hoping mine will get darker when I get older, so it will look like hers. “They going to let you swim in it?”

“I guess while I’m baby-sitting I can swim if I want to,” I said. “Nobody mentioned it.”

I made a face. “Little brats, I think. Still it’s only for a couple of hours a day on the afternoons when the housekeeper, Mrs. Murphy, goes to the dentist for root canal work. I should be able to stand it for a few hours a day. And she said there’d be a bonus if I did a good job.”

“Sounds good. Maybe you’ll make enough to get your own stereo on this one job instead of taking all summer,” Tim said.

“I hope so. I think I’m going to earn it.” I told him about the two older ones making faces at me, and how Melissa had said she didn’t want me for a sitter.

Tim laughed and eased the car away from the curb. “I can’t bring you over every day and pick you up. You’ll have to ride your bike.”

“Okay,” I said. I swiveled around in the seat to look back at the big Spanish-style house I’d just come out of. We don’t live in the part of the country where Spanish-style houses are plentiful; it really stood out in this neighborhood of huge, expensive houses.

And because I turned to look, I saw the car that pulled out behind us. It was black, almost as beat-up as Tim’s Volkswagen, not the kind of car you’d expect in this part of town. The sun reflected off the windshield, so I couldn’t see who was driving, or how many people were in it.

“I think we’re being followed,” I joked.

“It’s because we look like we’re rich,” Tim said, glancing in the rearview mirror. “I mean, that’s who they’d follow to rob, right? Somebody with a classy car.”

“Right,” I said, and settled back for the ride home. The funny thing was, when we turned off onto our own street, that black car was still behind us. I saw it when we went around the corner.

“Tim,” I began, but he wasn’t listening. He was looking toward our house, a big old-fashioned place with a veranda across the front of it, where three teenaged boys were sitting on the steps drinking pop out of cans.

“Hey, the gang’s here. We’re supposed to be going out to the river to swim. It’s lucky your interview didn’t take any longer, because if I’d missed going, I’d have disowned you.”

Since he disowned me about twice a day, that wasn’t too upsetting. I did wonder about the car, though. When we bumped into the driveway, I craned my neck to see where the other car went.

It didn’t stop, but kept on right past our house. There were two men in it; I couldn’t make out any more than that.

I had to wait for Tim to open the door before I could get out. The guys on the steps waved and yelled, and Tim got out and trotted toward them.

I stood for a minute, looking after the mysterious black car. It traveled slowly along to the next corner and turned as if to go back toward State Street, which is the main street in Marysville, the one we’d just turned off.

Just somebody driving around, maybe lost, I decided. After all, why would anybody follow us?

I went past the boys and into the house. Inside I made myself a peanut butter and jelly sandwich and forgot about the car. It didn’t have anything to do with me. How could it?
Willo Davis Roberts

Willo Davis Roberts wrote many mystery and suspense novels for children during her long and illustrious career, including The Girl with the Silver Eyes, The View from the Cherry Tree, Twisted Summer, Megan’s Island, Baby-Sitting Is a Dangerous Job, Hostage, Scared Stiff, The Kidnappers, and Caught! Three of her children’s books won Edgar Awards, while others received great reviews and other accolades, including the Sunshine State Young Reader’s Award, the California Young Reader’s Medal, and the Georgia Children’s Book Award.