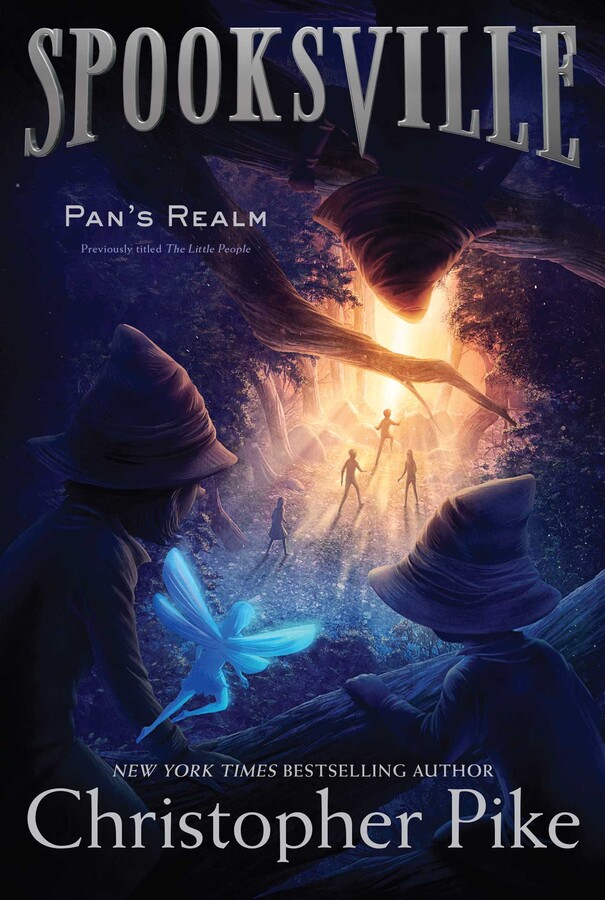 Book #8 of Spooksville
By Christopher Pike
LIST PRICE $5.99
PRICE MAY VARY BY RETAILER

Are there such things as fairies and gnomes? Leprechauns and elves? Most people, including Adam, would say no. But one day a whole herd of magical creatures invades Spooksville. At first they play childish pranks, and Adam and his friends are happy to welcome them. But quickly the pranks turn cruel, leaving Adam, Sally, Watch, and Cindy fighting for their lives.

Where did these little people come from? And how can Adam and his friends make them go away?

THE GANG HAD NEVER GONE on a real picnic before. Not in a meadow with a proper basket of food and a blanket to lie on in the sun. It was Cindy Makey who suggested it would be fun to do it at least once before school started. And since no one else could think of anything better to do that day, a picnic it was.

Their town, Spooksville, was surrounded by mountains and hills on three sides and the ocean on the fourth. It was in these wooded hills that they decided to have their picnic. There were many beautiful ­meadows in these woods. Meadows isolated enough that a person could pretend he or she was in the middle of nowhere. Places where evil could happen, and no one would be the wiser.

Until it was too late.

“I hope you didn’t put mayonnaise on my sandwich,” Watch said as Cindy began to empty the picnic basket on the yellow blanket they had brought. The meadow was filled with bright yellow daisies with black centers. Nearby a stream gurgled and there wasn’t a cloud in the sky. The surrounding trees were tall, heavy branched. Although they now sat in the sun, they had found the hike from the road through the woods rather chilly. The shadows were deep in these woods, and old.

“Since when did you care what’s between two slices of bread?” Sally Wilcox asked Watch. “You used to be the most unpicky eater I know. Hey, Cindy, Adam—I remember the time Watch ate half a dozen uncooked eggs.”

Cindy made a face and hooked her long blond hair behind her ears. “Is that true?” she asked Watch.

“It was at Easter, an egg-eating contest,” Watch explained. “The eggs were painted different colors.”

Sally smiled and pushed back her brown bangs. “So were the egg yolks. Only one had a normal yellow center. In fact, if I remember correctly, the one egg you didn’t eat eventually hatched and out popped a small reptilian creature that burrowed in the ground and eventually ate most of the local gophers.” Sally added, “I think the witch had something to do with those eggs.”

“At least I won first prize in the contest,” Watch said, fiddling with his pocket calculator. He was working out calculations for a new telescope he was building. Watch, in addition to wearing four watches, usually carried a calculator, just as Sally usually carried a Bic lighter.

“What was the prize?” Adam Freeman, who was the new kid in town, asked.

“A twenty-dollar gift certificate to the drugstore,” Sally said. “For the next year Watch got to buy all the antacids he needed.”

“The eggs did kind of make me sick,” Watch agreed. He checked out the turkey sandwich Cindy had handed him through his thick glasses. “After that I kind of lost my taste for chicken as well as for eggs.”

Watch chewed noisily. “Yeah. I’m not as picky as Sally says. As long as nothing in it bites back, I don’t really care what I eat.”

Adam gestured to the picnic basket. “What kind of sandwich did you make me?”

Sally was amused. “You’ll both be surprised.”

Cindy was annoyed. “You didn’t change our sandwiches, did you?”

“Are you asking me or telling me?” Sally, who already had her plain cheese sandwich in hand, wanted to know.

“I don’t believe this,” Cindy said as she checked the remaining two sandwiches.

“What is it?” Adam asked, already losing his appetite.

“We both have Spam sandwiches,” Cindy said, laying open the slices of bread for dark-haired Adam to see. “Spam and sprouts.”

“Yeah,” Cindy said sarcastically. “They really go perfectly together. Thanks a lot, Sally. After I went to all that trouble to make us all really nice sandwiches.”

Sally spoke to Adam. “Don’t believe a word of it. I saw your original sandwich. It looked like something for building strong bones and teeth rather than something you’d want to eat.”

“If the Spam doesn’t have mayonnaise on it,” Watch said, “I’ll eat it.”

Cindy tossed the sandwiches aside. “They have catsup all over them.”

“And little green things from an old jar at the back of the refrigerator,” Sally added. “You didn’t look under the Spam, Cindy dear.”

Cindy scowled at Sally as she reached for the other basket. “Just for that you don’t get any dessert. And I know you didn’t fool with my chocolate cake because I didn’t take my eyes off it.”

“After you baked it,” Sally said. “But what about before?”

“What did you put in it?” Cindy demanded.

“Except for a few of those little purple things from the back of the refrigerator,” Watch added.

“Watch is kidding,” Sally said. “The cake is fine—as long as Cindy didn’t ruin it with all the sugar and love she poured into it. I know she was thinking of you, Adam, when she baked it.”

“Better him than a complete stranger who wouldn’t care if Cindy choked to death on the cake or not,” Watch said wisely. “Are you sure you don’t want your Spam sandwich?” Watch asked hungrily.

“Yeah, I’m sure.” Cindy tentatively opened the picnic basket with the cake. “Seriously, I hope you didn’t mess with this cake, Sally. I may be a lousy gourmet cook, but I do know how to bake.”

“It doesn’t take much of a cook or a baker to make sandwiches,” Sally said.

“Shut up,” Cindy said to Sally as she removed the cake from the basket. Adam—feeling a little hungry, his breakfast notwithstanding—leaned forward to get a better look. But he hardly had a chance to see what was left of his lunch, when a small green man, with a nose as long as a spoon and hands as quick as a fox, leapt out of the trees, grabbed the cake, and disappeared back into the woods.

The four of them blinked. They sat in stunned silence.

“Did you guys see what I just saw?” Sally finally asked.

Sure. They had all seen the same thing.

A leprechaun had stolen their chocolate cake.
Christopher Pike

Book #8 of Spooksville
By Christopher Pike
LIST PRICE $5.99
PRICE MAY VARY BY RETAILER