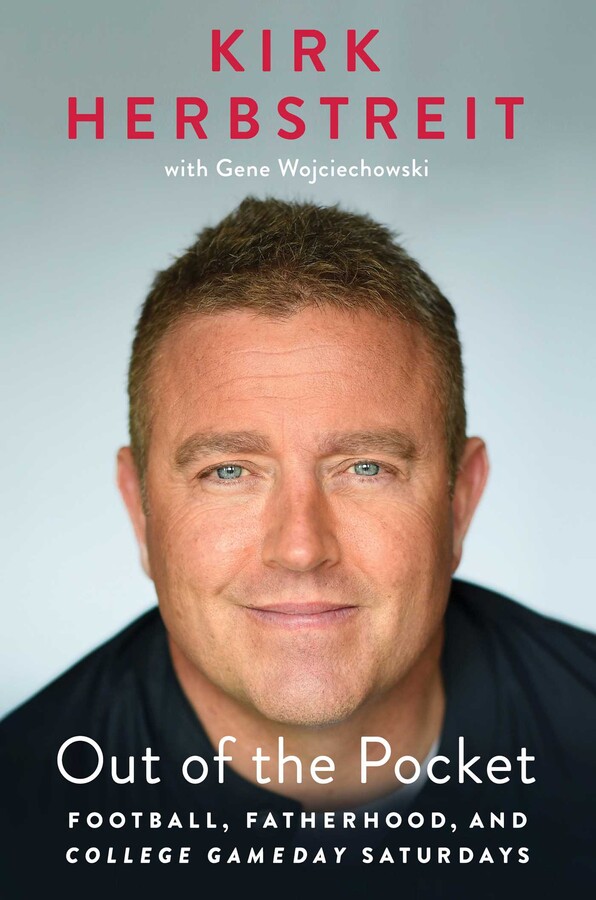 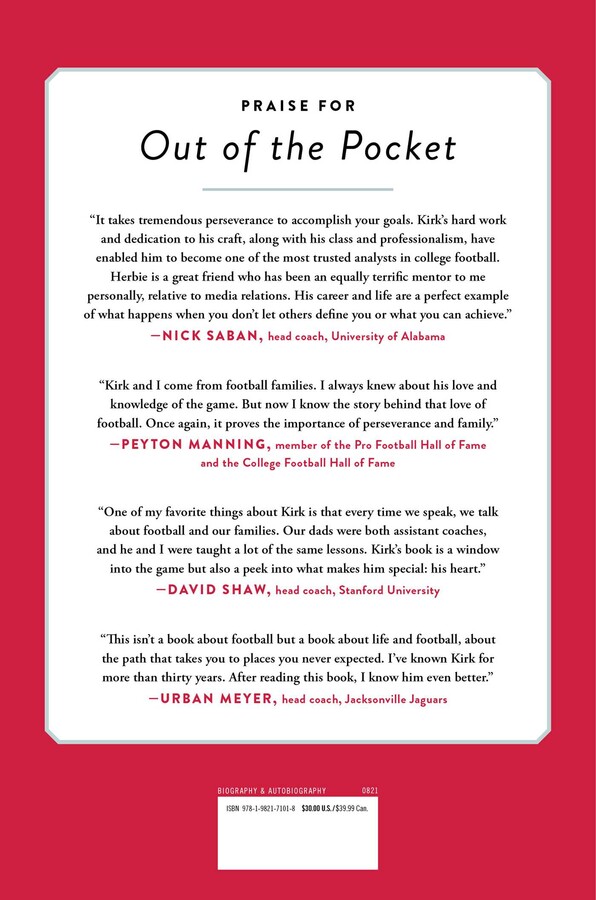 Out of the Pocket

By Kirk Herbstreit
With Gene Wojciechowski
LIST PRICE $30.00
PRICE MAY VARY BY RETAILER

This powerfully intimate, plain-spoken memoir about fathers and sons, fortitude, and football from the face and voice of college football—Kirk Herbstreit—is not just “a window into the game, but also a peek into what makes him special: his heart” (David Shaw, head coach, Stanford University).

Kirk Herbstreit is a reflection of the sport he loves, a reflection of his football-crazed home state of Ohio, where he was a high school star and Ohio State captain, and a reflection of another Ohio State football captain thirty-two years earlier: his dad Jim, who battled Alzheimer’s disease until his death in 2016.

In Out of the Pocket, Herbstreit does what his father did for him: takes you inside the locker rooms, to the practice fields, to the meeting rooms, to the stadiums. Herbstreit describes how a combination of hard work, perseverance, and a little luck landed him on the set of ESPN’s iconic College GameDay show, surrounded by tens of thousands of fans who treat their Saturdays like a football Mardi Gras.

He takes you into the television production meetings, on to the GameDay set, and into the broadcast booth. You’ll live his life during a football season, see the things he sees, experience every chaotic twist and turn as the year unfolds. Not to mention the relationships he’s established and the insights he’s learned from the likes of coaches and players such as Nick Saban, Tim Tebow, Dabo Swinney, and Peyton Manning, as well as his colleagues, including Chris Fowler, Rece Davis, and his “second dad,” the beloved Coach Lee Corso.

Yes, Kirk Herbstreit is the undeniable face and voice of college football—but he’s also a survivor. He’s the quiet kid who withstood the collapse of his parents’ marriage. The boy who endured too many overbearing stepdads and stepmoms. The painfully shy student who always chose the last desk in the last row of the classroom. The young man who persevered through a frustrating Ohio State playing career. The new college graduate who turned down a lucrative sales job after college to pursue a “no way you’ll make it” dream career in broadcasting.

Inspiring and powerful, Out of the Pocket “proves the importance of perseverance and family” (Peyton Manning). 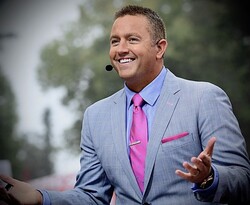 Kirk Herbstreit joined ESPN in 1995, establishing himself as the face and voice of college football, both as a member of the critically acclaimed College GameDay show, as well as the lead analyst for ESPN and ABC Sports primetime game broadcasts. He is the most honored ESPN commentator in the network’s history, having won multiple Sports Emmys as an event analyst and also as a studio analyst. Herbstreit graduated from The Ohio State University, where he was the Buckeyes starting quarterback and team co-captain as a senior. He lives with his family in Nashville, Tennessee. You can follow him on Twitter @KirkHerbstreit.

“It takes tremendous perseverance to accomplish your goals. Kirk's hard work and dedication to his craft, along with his class and professionalism, has enabled him to become one of the most trusted analysts in college football. Herbie is a great friend who has been an equally terrific mentor to me personally, relative to media relations. His career and life are a perfect example of what happens when you don't let others define you or what you can achieve.”—Nick Saban, Head Coach, University of Alabama

“Kirk and I come from football families. I always knew about his love and knowledge of the game. But now I know the story behind that love of football. Once again, it proves the importance of perseverance and family.''—Peyton Manning, member of the Pro Football Hall of Fame, and College Football Hall of Fame

“One of my favorite things about Kirk is that every time we speak, we talk about football AND our families. Our dads were both assistant coaches and he and I were taught a lot of the same lessons. Kirk's book is a window into the game, but also a peek into what makes him special: his heart.''—David Shaw, Head Coach, Stanford University

“Herbstreit’s story here is deeply personal—absent father, impoverishment, conflicts with fellow broadcasters—while also sharing enough insights into the college game, and into the broadcasting world, to gladden the heart of any college-football geek.” —Booklist

“A pleasantly self-effacing, immersive look at both sports and sportscasting.”—Kirkus

"What Out of the Pocket delivers is uncommon honesty. " —Patriot-News

Out of the Pocket

By Kirk Herbstreit
With Gene Wojciechowski
LIST PRICE $30.00
PRICE MAY VARY BY RETAILER