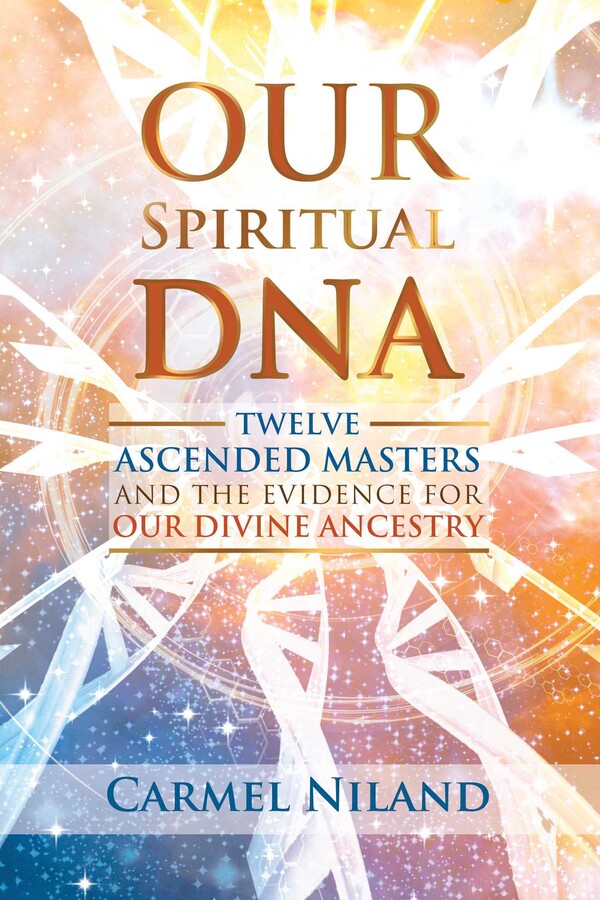 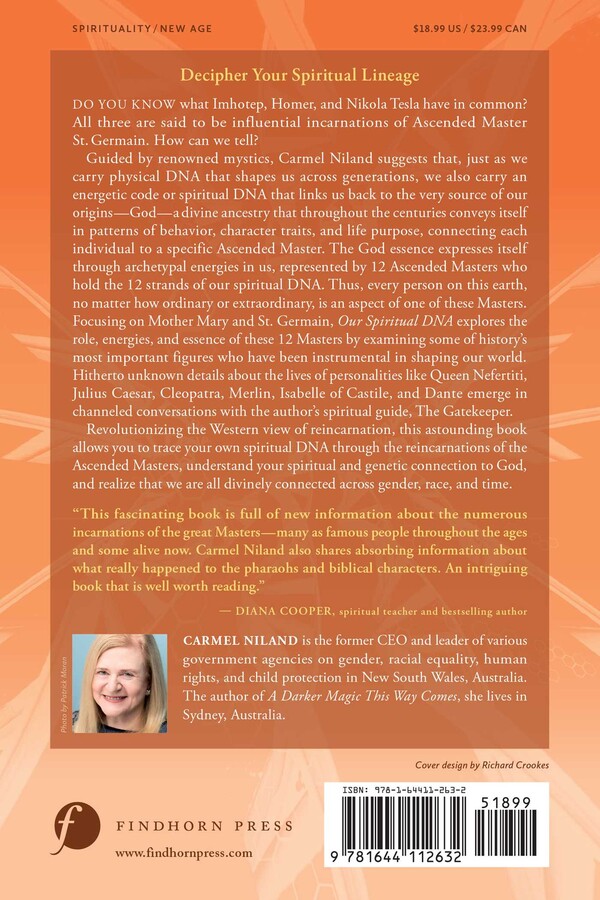 Twelve Ascended Masters and the Evidence for Our Divine Ancestry

A guide to deciphering your spiritual lineage

• Investigates the roles, energies, and essence of 12 Ascended Masters and how each of them holds a strand of our spiritual DNA

• Traces the reincarnations of Ascended Masters Mother Mary and St. Germain through history, depicting the positive and shadow aspects of their archetypal energies

DO YOU KNOW what Imhotep, Homer, and Nikola Tesla have in common? All three are said to be influential incarnations of Ascended Master St. Germain. How can we tell?

Guided by renowned mystics, Carmel Niland suggests that, just as we carry physical DNA that shapes us across generations, we also carry an energetic code or spiritual DNA that links us back to the very source of our origins -- God -- a divine ancestry that throughout the centuries conveys itself in patterns of behavior, character traits, and life purpose, connecting each individual to a specific Ascended Master. The God essence expresses itself through archetypal energies in us, represented by 12 Ascended Masters who hold the 12 strands of our spiritual DNA. Thus, every person on this earth, no matter how ordinary or extraordinary, is an aspect of one of these Masters. Focusing on Mother Mary and St. Germain, Our Spiritual DNA explores the role, energies, and essence of these 12 Masters by examining some of history’s most important figures who have been instrumental in shaping our world. Hitherto unknown details about the lives of personalities like Queen Nefertiti, Julius Caesar, Cleopatra, Merlin, Isabelle of Castile, and Dante emerge in channeled conversations with the author’s spiritual guide, The Gatekeeper.

Revolutionizing the Western view of reincarnation, this astounding book allows you to trace your own spiritual DNA through the reincarnations of the Ascended Masters, understand your spiritual and genetic connection to God, and realize that we are all divinely connected across gender, race, and time.

My First Meeting with St. Germain

On a Sunday night, in a late Sydney summer, I sat waiting for Peter Abraham, who I hoped would channel St. Germain. According to history books, Germain was a French Count in revolutionary France known as Comte de Saint Germain, who lived from 1691-1712. Here was someone with an intriguing resume: adventurer, explorer, philosopher, scientist, alchemist, and magician. He was said to be extraordinarily intelligent, articulate, and widely published. He appeared to live many lives in one lifetime, and I was soon to discover that he had lived many lifetimes on Earth too. St Germain should be a man who had answers to my questions if Peter Abraham could channel him.

The birds and the barking dogs settled. Peter, together with friends, led an invocation, followed by a guided meditation and prayers to open a sacred space to allow beings of great power to come through and enter his body. First, a group of angels cleared the room. Then a host of beings entered with both familiar and strange names; Master Kuthumi with Lady Portia, El Moyra, and Pallas Athene, Master Hilarion with Lady Nada, Djwahl Kuhl, and Lady Leto, and Serapis Bey and Lakshmi. They would speak through Peter or his friend Michaela Clinton and guide others in the room. Their presence and their movement around the room were vividly described by Peter and by others who could “see” their unseen presence. St. Germain, however, was not among them.

Then a being called Lord Sananda entered, unannounced.

Everyone, except me, seemed to know of Lord Sananda, but when he said, “I speak as ‘Jeshua,’” I felt the pulse of excitement go through the room. He spoke gently, recounting a parable about patience and mercy using the Middle Eastern imagery of the natural beauty and fruitfulness of the vines, the vibrant color of the flowers, lilies of the field, and his love for his flock: his children. When he left, we remained in contemplation for a while until there was a rustle. The dog started barking loudly, and the cicadas joined him.

Someone new had arrived. St Germain was here!

Only those who saw him clairvoyantly knew it was St. Germain. I saw nothing.

“What’s happening?” I mouthed to my friend. She whispered that a bearded man with glossy black hair and a violet cloak was in the room. He was spinning like a top and sparkled with amethyst and gold.

“He’s like an electric shock crackling through time,” someone else explained.

After the calm of Lord Sananda, this was a dramatic entrance.

Peter, still channelling St Germain, rose from his chair, came over to me and said, “Give me your hand.”

I was very reluctant to do so because I had been warned never to touch a channel while they were channelling for fear of causing them a shock.

“Give me your hand,” he insisted.

I held it out, and he kissed it. I was so surprised I snatched it back.

Tongue-tied, I could not answer him.

I decided then to find out more about what it meant to be a Master and about St. Germain. That decision would take me to places I never thought I would go and would result in a relationship with St. Germain that would lead to this book and the uncovering of long-held secrets. I used two different channels, Peter Abraham and Dr. George Litchfield, to connect with him. Both used prayers to create a sacred space before they opened themselves up to other realms. They called on protective beings to help them, they put aside their egos to allow beings of light, and no others, to speak through them, and they worked privately, discreetly, and with patience. They were men of integrity.

From Chapter 4: Ancient Egypt
Thinking about these Lives

Imhotep, the quiet achiever, gives his name to one of the most remarkable lives of St Germain. In contrast to St Germain’s usual persona of front-line, larger than life characters, Imhotep, and those who share his energy of the Imhotep line, are no-frills, nose to the grindstone, dependable men like Captain James Cook or President Harry Truman. Explorers, navigators, scientists, architects, doctors, politicians, lawyers, physicians, presidents, philosophers, and warriors, they are always meticulous, exact and hardworking. They will deliver, like Imhotep himself, on the toughest missions and his mission was to accelerate Egyptian civilization. The Imhotep line is one of the lines of the vast energy called St Germain. When all lines are taken together, they give us a picture of the embrace of contradictions within him.

Let’s divide his millions of lives into lines. The first line of St Germain is that of the Comte de Saint-Germain himself: the international diplomat: urbane, suave, charming, super intelligent, multi-lingual, the founder of nations. It has another dimension of this first line as well. I call it the Boaz line of upright, saintly, courageous men who too exercise power, but their incorruptibility can absolutely be relied on. They fight for reform; they liberate the oppressed and are some of the best orators ever created. Joseph of Arimathea, St Patrick, and St Columba are examples.

The Dante line captures St Germain as a creature of romance. Here are his lives as poets, dramatists, writers, dreamers, diplomats, artists, actors, musicians, and dancers. Dante, formerly Homer, wrote a long love letter to his beloved Beatrix, formerly Nefertari, and as he did, he created the Italian language... Music permeates St Germain’s creativity. I am often asked about the energies of the four Beatles. Two were Hilarion, one was a Kuthumi, and one was St Germain...
Carmel Niland

Carmel Niland is the former CEO and leader of various government agencies on gender, racial equality, human rights, and child protection in New South Wales, Australia. The author of A Darker Magic This Way Comes, she lives in Sydney, Australia.

“This fascinating book is full of new information about the numerous incarnations of the great Masters -- many as famous people throughout the ages and some alive now. Carmel Niland also shares absorbing information about what really happened to the pharaohs and biblical characters. An intriguing book that is well worth reading.”

“This book is fabulous, a real fount of knowledge. Through the medium of channeling, it reaches into the depths of history and reveals the links that powerful souls have with each other and their many incarnations on Earth and in other realms. It provides a direct link from the Ascended Masters to early humans and all the way back to God. Its aim is to show you how you may be linked to each other, to them, and, ultimately, to God.”

– Lorraine Flaherty, hypnotherapist, past life therapist, and author of Healing with Past Life Therapy

“Our Spiritual DNA is a veritable Who’s Who of the esoteric world, listing the major characters who have defined the caliber of our spiritual lives in the Western world over the past 6,000 years. At the core of the book is a depiction of the Council of White Light and as you leap the divide between history and myth in order to find the face of the Divine, to know the unknowable, you will encounter the great wonder of St. Germain, our contemporary Christos. Little of any substance has been written about this extraordinary Master for some time, and yet now is the time as we center our lives in the nature of the Aquarian Age. This book is particularly welcome and will inform the esoteric student of the Master’s lineage and how his odyssey is always present to define the true nature of love. In awe you will find St. Germain with the eleven other Ascended Masters, evoking dreams within you that are way beyond your current imagination!”

– Stewart Pearce, master of voice, angelic emissary, and author of The Angels of Atlantis

Twelve Ascended Masters and the Evidence for Our Divine Ancestry