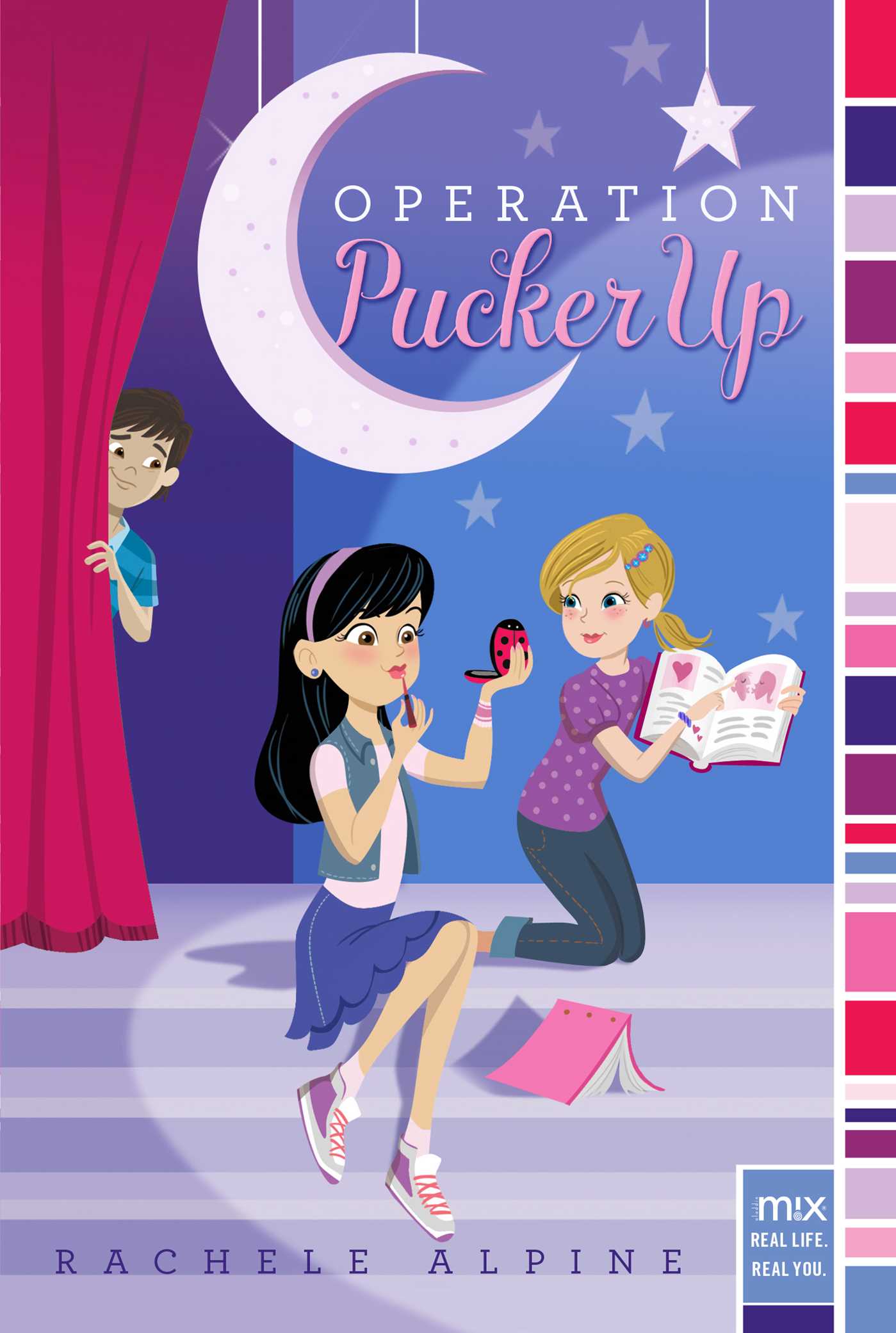 Part of mix
By Rachele Alpine
LIST PRICE $8.99
PRICE MAY VARY BY RETAILER

First kisses are always nerve-racking—but especially when they’re onstage! Can Grace find a real-life Prince Charming before she has to lock lips in front of a crowd?

When Grace Shaw finds out she’s been cast as the lead in her school play, she has about two seconds to celebrate before she realizes she’ll have to kiss Prince Charming, aka James Lowe, aka the heartthrob of Sloane Middle School…on the lips! She’s never kissed a boy, and the idea of experiencing her very first kiss in front of a live audience with the most popular boy in school sounds like her worst nightmare instead of a dream come true.

So Grace’s two best friends propose Operation Pucker Up—a plan for Grace to score a kiss before opening night so she doesn’t make a fool of herself in front of an audience. And as if Grace isn’t having a hard enough time, her estranged father suddenly reappears after leaving six months earlier. Her mom and sister welcome Dad back with open arms, but Grace can’t simply forgive and forget. With opening night fast approaching, Operation Pucker Up reaching ridiculous levels, and family drama teeming behind the scenes, Grace is beginning to think all this love stuff is way too complicated. Will she find a way to have her happily ever after—and seal it with a kiss—both onstage and off?

IT’S PRETTY MUCH IMPOSSIBLE TO get out of Mrs. Reichard’s room during one of her history lectures. Many have tried, but few are able to claim success.

All my other teachers let you go to the bathroom if it’s an emergency, but Mrs. Reichard is not like most teachers. She acts as if leaving her class is a personal attack on her. The woman drones on and on and absolutely refuses to let anyone get up and leave until she’s done “filling your heads with my wondrous fountains of knowledge,” as she says. Short of needing serious medical attention, you’re stuck in her room until the bell rings. Actually, I’m not even sure calling 911 would work.

But today I had a mission. And I wasn’t about to let anything stop me. Not even Mrs. Reichard and her “fountains of knowledge,” because class was over in ten minutes and I needed to see the cast list for Snow White before anyone else.

I raised my hand as she babbled on about the settlement of the American West. She paused and lifted her eyebrows as if I were interrupting the most thrilling discussion ever (which, for your information, it was not. Not even remotely close. It looked as if half the class were trying to stay awake, and there was one kid in the corner who had lost the battle and was drooling onto his desk).

“Yes, Grace?” She peered at me over the top of her bright red reading glasses and looked positively peeved that I had the nerve to disturb her lesson.

“Can I go to the bathroom?” I wiggled around a little bit, hoping she’d get the idea of how important the situation really was.

But of course she didn’t buy it.

“How about you wait until class is over,” she said in a way that was not a question, but what my English teacher called an imperative sentence.

“I can’t. This is an emergency,” I told her, and squirmed even more in my seat to make it seem like this was a life-or-death situation. Some of the kids around me giggled. My face flushed red, but it didn’t matter. Let them laugh. I needed to complete this very important task, and time was not on my side.

“I don’t see any reason why you can’t hold it for the ten more minutes we have left in class.” Mrs. Reichard turned her back to me and wrote some notes on the board.

“Please,” I begged, even though this was getting downright humiliating. I imagined my classmates whispering in the hallway about how close I came to having an accident in history. They’d point and laugh and make up some awful nickname that had to do with diapers or something equally embarrassing.

She sighed so loud, I swear it shook the walls. “Go ahead, but hurry back.”

“Thank you, thank you, thank you!” I shouted, and jumped up. I glanced at my best friend, Lizzie, as I raced to the door. She rolled her eyes, and I winked at her. She knew I was going to see if the list was posted. It always went up at some point during last period, right before the school day was over. Probably because our director, Mrs. Hiser, didn’t want to deal with the drama from those who didn’t get the parts they wanted. Mrs. Hiser was smart. Post it when ­everyone was leaving and our parents would be the first ones forced to listen to us complain, not her.

I learned the hard way how important it is to look at the list alone. Last year I thought I was going to get a lead role and talked about it the whole day. I checked the list with the rest of my friends only to discover I was cast as Snowflake Number Three. I wasn’t even Snowflake Number One. The experience taught me that it’s a lot easier to find out you got a teeny-tiny part when there aren’t a whole bunch of people around you.

I rushed out of the room but slowed down to check and make sure the hall monitors weren’t around. If they spotted you anywhere but the bathroom, it was back to class immediately, and I couldn’t risk getting caught before I completed my mission. I used my ninja-like skills and moved through the hallway undetected.

Finally, I made it to the last hallway before the drama wing. As soon as I turned the corner, I instantly knew the scene I caused in class was worth it, because the list was up! The bright yellow paper hung in the center of the bulletin board. The palms of my hands started to sweat and my heart pounded. I approached slowly, and when I stood in front of it, I put my hand in my pocket and pulled out my lucky marble. I closed my fingers around it and squeezed tight before I looked at the list.

Now, I’m not a superstitious person. I stroll under ladders as if it’s no big deal, open umbrellas inside because it beats getting rained on when you have to do it outside, and if a black cat crosses my path, I’ll bend down to pet it.

I don’t believe in any of that ridiculous stuff. Nope. Not at all.

Until I audition for a play.

Then I turn into a person obsessed with the power of lucky charms, because ever since I discovered my magical marble, I’ve been cast in every show. Mom says I get the parts because I’m talented, and she might be right—and I’ve taken many acting, dancing, and singing classes—but I firmly believe that if I didn’t have my marble, I’d be doomed to a life of stage crew. Not that there is anything wrong with stage crew, but why would I want to hide behind the curtain when I could be out front where I belonged, blinded by the bright lights shining on me?

I clutched my marble, closed my eyes, made a wish, and read the names from the bottom of the list to the top like I always do. It helps prolong the seconds I can imagine I might still have a chance at the lead. Sometimes the anticipation is better than the actual real thing, especially when the real thing means getting a part like Snowflake Number Three.

My friends Lizzie, Beck, and I had sat together in the theater watching each person audition, and they both pinkie-swore I was the best Snow White out of the whole bunch. I didn’t say anything back to them, but I silently agreed. I rocked the audition. Usually I’m nervous before trying out, but not that day. I walked across the stage and said my monologue as if I had been born to play the Fairest in the Land. And now the time had come to see if all my hard work had paid off.

I found Beck’s name and giggled when I saw he was Grumpy the Dwarf. Beck was the complete opposite of grumpy; I don’t know if I have ever seen him in a bad mood. He would get to show off his acting chops with that role. ­Lizzie was on the list too, as a townsperson, which would make her happy. Lizzie was more of a small-role type of girl. I, on the other hand, most certainly was not.

I rolled the marble around and around in the palm of my hand as slowly, slowly, my eyes made their way to the top, and there, right at the very tippy-top, was my name.

I couldn’t help it. I threw my hands up in the air and danced. I totally busted it out in the middle of the hallway. A hall monitor stared at me, so I waved, because, really, what did it matter? I didn’t care at this point if the whole school saw me breaking it down. It wasn’t every day that a seventh grader got the lead in Sloane Middle School’s play. Usually those parts were given to eighth graders, but not this time!

I looked at my name again and touched it. My fingers traced the letters, and I fist-pumped the air.

This was big! This was major! This was the best day of my life!
Rachele Alpine

One of Rachele Alpine’s first jobs was at a library, but it didn’t last long, because all she did was hide in the third-floor stacks and read. Now she’s a little more careful about when and where she indulges her reading habit. Rachele is a high school English teacher by day, a wife and mother by night, and a writer during any time she can find in between. She lives in Cleveland, Ohio, where she writes middle grade and young adult novels. Visit her at RacheleAlpine.com.

Part of mix
By Rachele Alpine
LIST PRICE $8.99
PRICE MAY VARY BY RETAILER