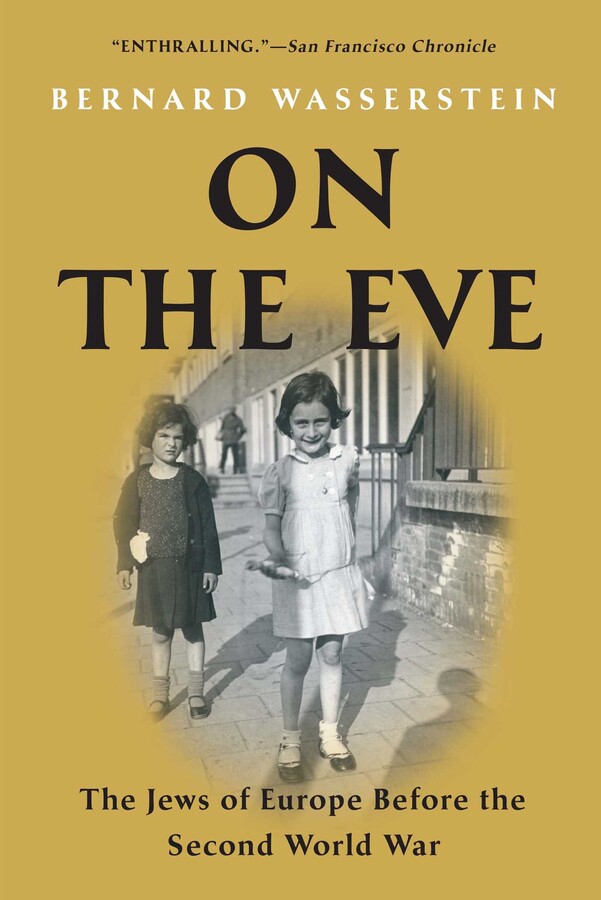 By Bernard Wasserstein
LIST PRICE $14.99
PRICE MAY VARY BY RETAILER

On the Eve is the portrait of a world on the brink of annihilation. In this provocative book, Bernard Wasserstein presents a new and disturbing interpretation of the collapse of European Jewish civilization even before the Nazi onslaught.

In the 1930s, as Europe spiraled toward the Second World War, the continent’s Jews faced an existential crisis. The harsh realities of the age—anti-Semitic persecution, economic discrimination, and an ominous climate of violence—devastated Jewish communities and shattered the lives of individuals.

The Jewish crisis was as much the result of internal decay as of external attack. Demographic collapse, social disintegration, and cultural dissolution were all taking their toll. The problem was not just Nazism: In the summer of 1939 more Jews were behind barbed wire outside the Third Reich than within it, and not only in police states but even in the liberal democracies of the West. The greater part of Europe was being transformed into a giant concentration

camp for Jews. Unlike most previous accounts, On the Eve focuses not on the anti-Semites but on the Jews. Wasserstein refutes the common misconception that they were unaware of the gathering forces of their enemies. He demonstrates that there was a growing and widespread recognition among Jews that they stood on the edge of an abyss.

On the Eve recaptures the agonizing sorrows and the effervescent cultural glories of this last phase in the history of the European Jews. It explores their hopes, anxieties, and ambitions, their family ties, social relations, and intellectual creativity—everything that made life meaningful and bearable for them.

Wasserstein introduces a diverse array of characters: holy men and hucksters, beggars and bankers, politicians and poets, housewives and harlots, and, in an especially poignant chapter, children without a future. The geographical range also is vast: from Vilna (the “Jerusalem of the North”) to Amsterdam, Vienna, Warsaw, and Paris, from the Judeo-Espagnol-speaking stevedores of Salonica to the Yiddish-language collective farms of Soviet Ukraine and Crimea.

Wasserstein’s aim is to “breathe life into dry bones.” Based on comprehensive research, rendered with compassion and empathy, and brought alive by telling anecdotes and dry wit, On the Eve offers a vivid and enlightening picture of the European Jews in their final hour.

Bernard Wasserstein is Ulrich and Harriet Meyer Professor of Modern European Jewish History at the University of Chicago. His many previous books include The Secret Lives of Trebitsch Lincoln, which was awarded the Golden Dagger for Non-Fiction by the Crime Writers’ Association, and Barbarism and Civilization: A History of Europe in Our Time.

“Enthralling, heartbreaking… Wasserstein commands an intensive and incisive knowledge of the Jewish subculture …and, as may be seen, the ability to write about it evocatively.”

"Meticulous, closely researched, movingly evocative....As an encyclopaedic record of Jewish life before the second world war, Wasserstein's book is nothing less than a marvel. Nothing escapes his gaze....As he shows, Jewish society had a cultural richness and diversity to match any in Europe….Wasserstein's great achievement is to show just how far Jewish life in Europe was embattled even before war broke out in 1939. This was not some lost golden age.”

“A substantive, perceptive, and highly valuable kaddish for lost lives and lost worlds.”

"At last, we have a comprehensive, richly textured account of Jewish life in Europe before the Holocaust. Bernard Wasserstein is unsparingly honest in his portrayal of a highly diverse, highly accomplished community, weakened by internal divisions and demographic decline as a much larger disaster loomed. On the Eve is essential reading for anyone seeking to understand the world that was about to disappear."

“The Holocaust lingers in the memory not just because of the scale of the terror visited on Europe's Jews but because of the many, many questions the event has raised that remain unanswered. Wasserstein creates a kaleidoscopic portrait of the many different ways Jews lived from France into Russia. An important study with an important message.”

– Michael Goldfarb, author of Emancipation: How Liberating Europe's Jews from the Ghetto Led to Revolution and Renaissance

"Takes the reader step by step through the history of the Jews of Europe between the two world wars and provides a comprehensive survey of their situation throughout the continent. It is a rare and excellent introduction, an evaluation that furnishes a deeper understanding of the events of the Holocaust."

“Wasserstein chronicles European Jewry in the decade before the war, boldly exploring problems within the community as well as the external pressures of anti-Semitism…I suspect that we think we know all there is to know about this subject, but we don’t; Wasserstein should have us covered. Important.”

“Wasserstein . . . is not only an expert about his subject matter but also a lucid writer. . . . superb”

“Judicious and comprehensive . . . in the process of covering such a wide chronological and geographic scope, Wasserstein frequently brings in the lives and experiences of specific individuals, thereby offering the reader a sense of life as it was lived.”

“An enlightening and moving evocation of the richness and heterogeneity, both vast and under-documented, of Jewish life in pre-war Europe.”

By Bernard Wasserstein
LIST PRICE $14.99
PRICE MAY VARY BY RETAILER