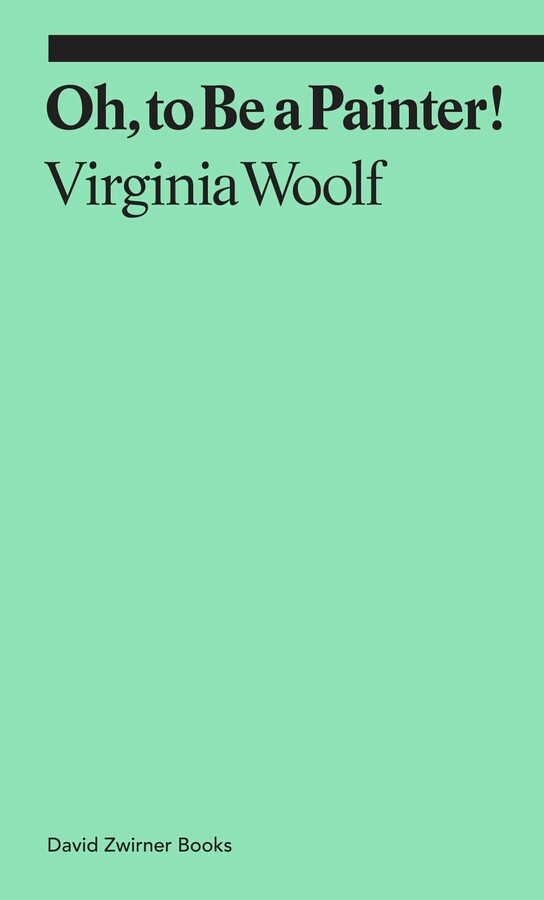 Oh, To Be a Painter!

Despite wide interest in Woolf's writings, her circle, and her relationship with the visual arts, there is no accessible edition or selection of essays dedicated to her writings on art. This newest edition in David Zwirner Books’s ekphrasis series collects such essays including “Walter Sickert: A Conversation” (1934), “Pictures” (1925), and “Pictures and Portraits” (1920).

These formally inventive texts examine the connection between the literary writer and the visual artist and are innovative in their treatment of ideas about color and modern art as experienced in picture galleries. In these essays, Woolf looks at the complex and interdependent relationship between the artist and society. She also provides sharp and astute commentary on specific works of art and the relationship between art and writing.

An introduction by Claudia Tobin situates the essays within their cultural contexts.

Colours went spirally through my body lighting a flare as if a rocket fell through the night and lit up greens and browns, grass and trees, and there in the grass a white bird. Colour warmed, thrilled, chafed, burnt, soothed, fed and finally exhausted me. For though the life of colour is a glorious life it is a short one.

The face of a civilized human being is a summing-up, an epitome of a million acts, thoughts, statements and concealments. Yes, Sickert is a great biographer, said one of them; when he paints a portrait I read a life. ... Words are an impure medium; better far to have been born into the silent kingdom of paint. But to me Sickert always seems more of a novelist than a biographer, said the other. He likes to set his characters in motion, to watch them in action. As I remember it, his show was full of pictures that might be stories, as indeed their names suggest.

His paint has a tangible quality; it is made not of air and star-dust but of oil and earth. We long to lay hands on his clouds and his pinnacles; to feel his columns round and his pillars hard beneath our touch. One can almost hear his gold and red dripping with a little splash into the waters of the canal. Moreover, human nature is never exiled from his canvas.

But since we love words let us dally for a little on the verge, said the other. Let us hold painting by the hand a moment longer, for though they must part in the end, painting and writing have much to tell each other; they have much in common.

Undoubtedly, they agreed, the arts are closely united. What poet sets pen to paper without first hearing a tune in his head? And the prose-writer, though he makes believe to walk soberly, in obedience to the voice of reason, excites us by perpetual changes of rhythm following the emotions with which he deals.
Virginia Woolf

Virginia Woolf (1882–1941) was one of the major literary figures of the twentieth century. An admired literary critic, she authored many essays, letters, journals, and short stories in addition to her groundbreaking novels.

Oh, To Be a Painter!