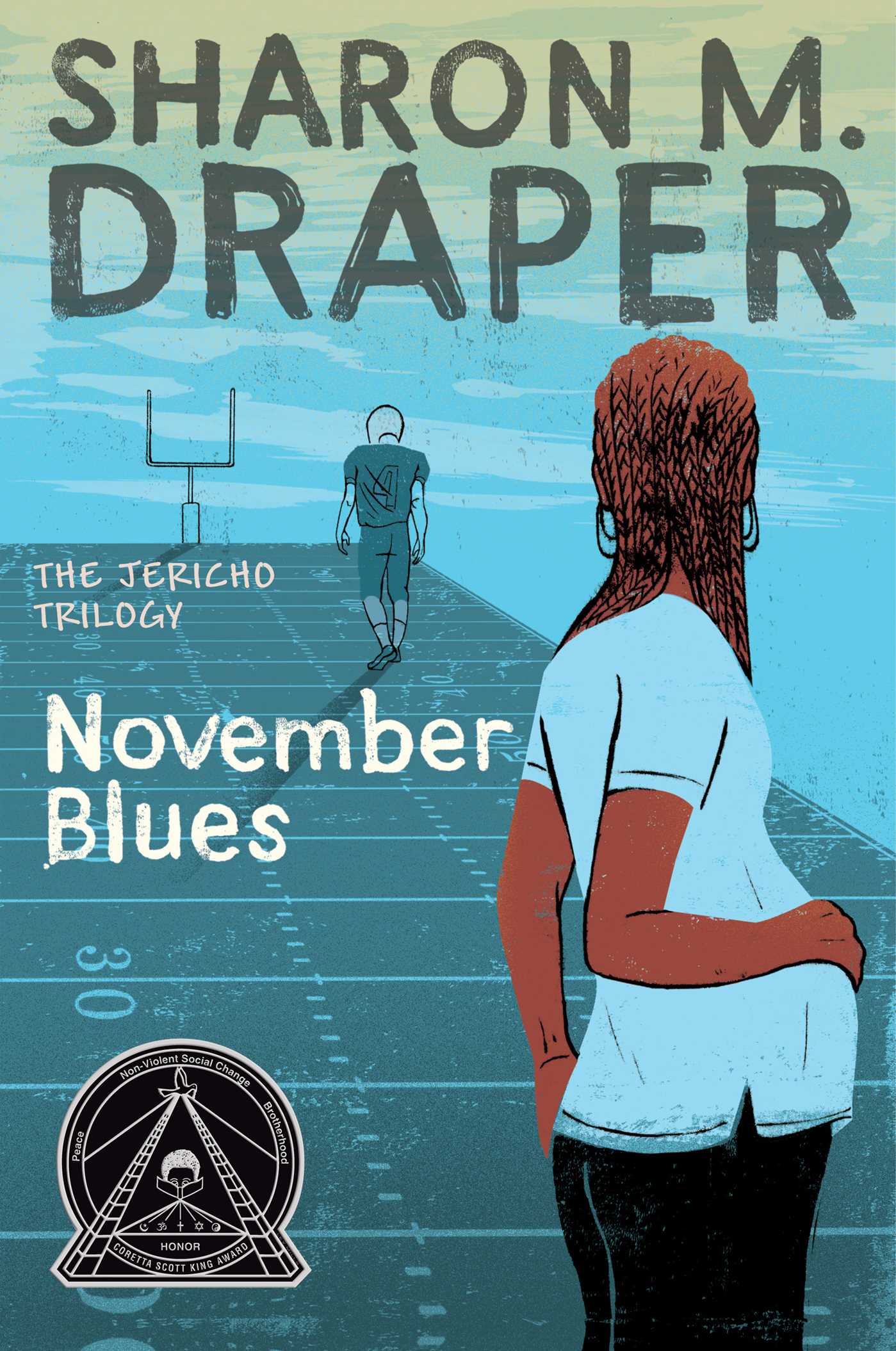 Part of The Jericho Trilogy
By Sharon M. Draper
LIST PRICE $19.99
PRICE MAY VARY BY RETAILER

In this second novel in Sharon M. Draper’s Jericho Trilogy and Coretta Scott King Honor Book, Jericho and November are locked together in pain from the past and fear for the future, and it feels as though there’s no way to escape either.

When November Nelson loses her boyfriend, Josh, to a pledge stunt gone horribly wrong, she thinks her life can’t possibly get any worse. But Josh left something behind that will change November’s life forever. She’s pregnant and now she’s faced with the biggest decision of her life. How in the world will she tell her mom? And how will Josh’s parents take the news? She’s never needed a friend more.

Jericho Prescott lost his best friend when he lost his cousin, Josh, and the pain is almost more than he can bear. His world becomes divided into “before” and “after” Josh’s death. He finds the only way he can escape the emptiness he feels is to quit doing the things that made him happy when his cousin was alive, such as playing his beloved trumpet. At the same time, he begins playing football, where he hopes the physical pain will suppress the emotional agony. But will hiding behind shoulder pads really help? And will his gridiron obsession prevent him from being there for his cousin’s girlfriend when she needs him most?

NOVEMBER NELSON LURCHED TO THE BATHROOM, feeling faint and not quite in control of her suddenly unsteady legs. She touched her forehead and found it warm and glazed with sweat. Sinking down on the soft blue rug in front of the toilet, she was grateful for the momentary stability of the floor. But her head continued to spin, and her stomach churned. She lifted the toilet lid, gazed into the water, and wished she could disappear into its depths. Her breath became more shallow, and her nausea more intense. Finally, uncontrollably, and forcefully, all her distress erupted and she lost her lunch in heaves and waves of vomiting. Pepperoni pizza.

She flushed the toilet several times as she sat on the floor waiting to feel normal again. Finally she stood up shakily, gargled with peppermint mouthwash, and peered at herself in the mirror.

“You look like a hot mess,” she whispered to her reflection. Her skin, instead of its usual coppery brown, looked gray and mottled. She hadn’t combed her hair all day, so it was a halo of tangles.

November knew her mother would be home soon and would be angry to find out she’d skipped school. She didn’t care. Her thoughts were focused on the package in her backpack. Even though she knew the house was empty, she made sure the bathroom door was locked. She dug the little purple and pink box out of her book bag and placed it on the sink. It seemed out of place in her mother’s perfectly coordinated powder blue bathroom.

With trembling hands she unwrapped the plastic and opened the box. She read the directions carefully. She looked out of the small bathroom window and watched the last of the early spring snow melting on the grass. Everything looked the same, but she knew in her heart that it was all different now.

November finally turned back to the little white tube in the box and followed the instructions, which were written, she noticed, in Spanish and French as well. Three minutes later the indicator silently screamed the news that she already suspected. She was pregnant.

Sharon M. Draper is a three-time New York Times bestselling author and a recipient of the Margaret A. Edwards Award honoring her significant and lasting contribution to writing for teens. She has received the Coretta Scott King Award for both Copper Sun and Forged by Fire, and was awarded the Charlotte Huck Award for Stella by Starlight. Her novel Out of My Mind has won multiple awards and was a New York Times bestseller for over three years, and Blended has also been a New York Times bestseller. She lives in Florida, where she taught high school English for twenty-five years and was named National Teacher of the Year. Visit her at SharonDraper.com.

Part of The Jericho Trilogy
By Sharon M. Draper
LIST PRICE $19.99
PRICE MAY VARY BY RETAILER

More books in this series: The Jericho Trilogy