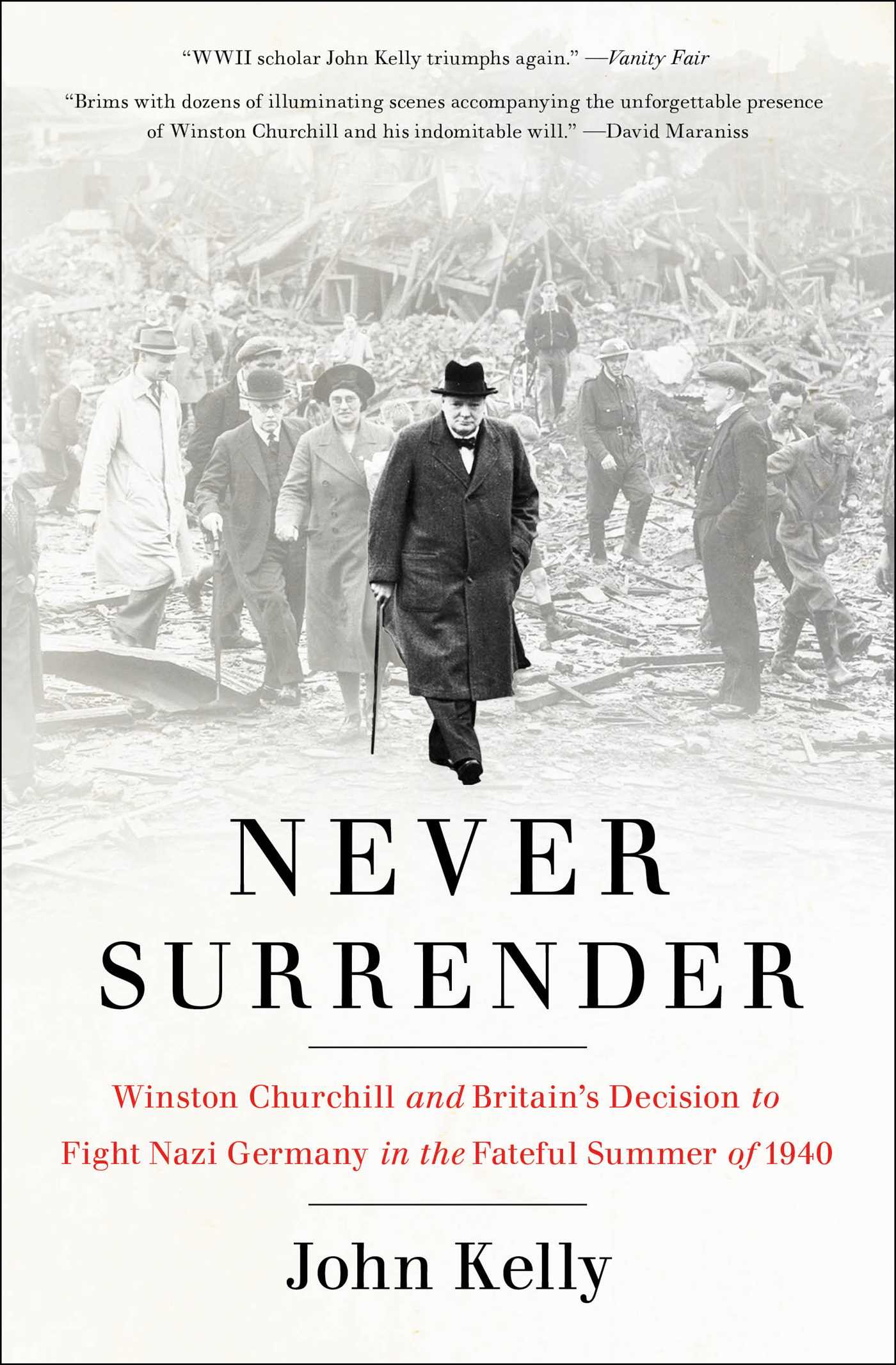 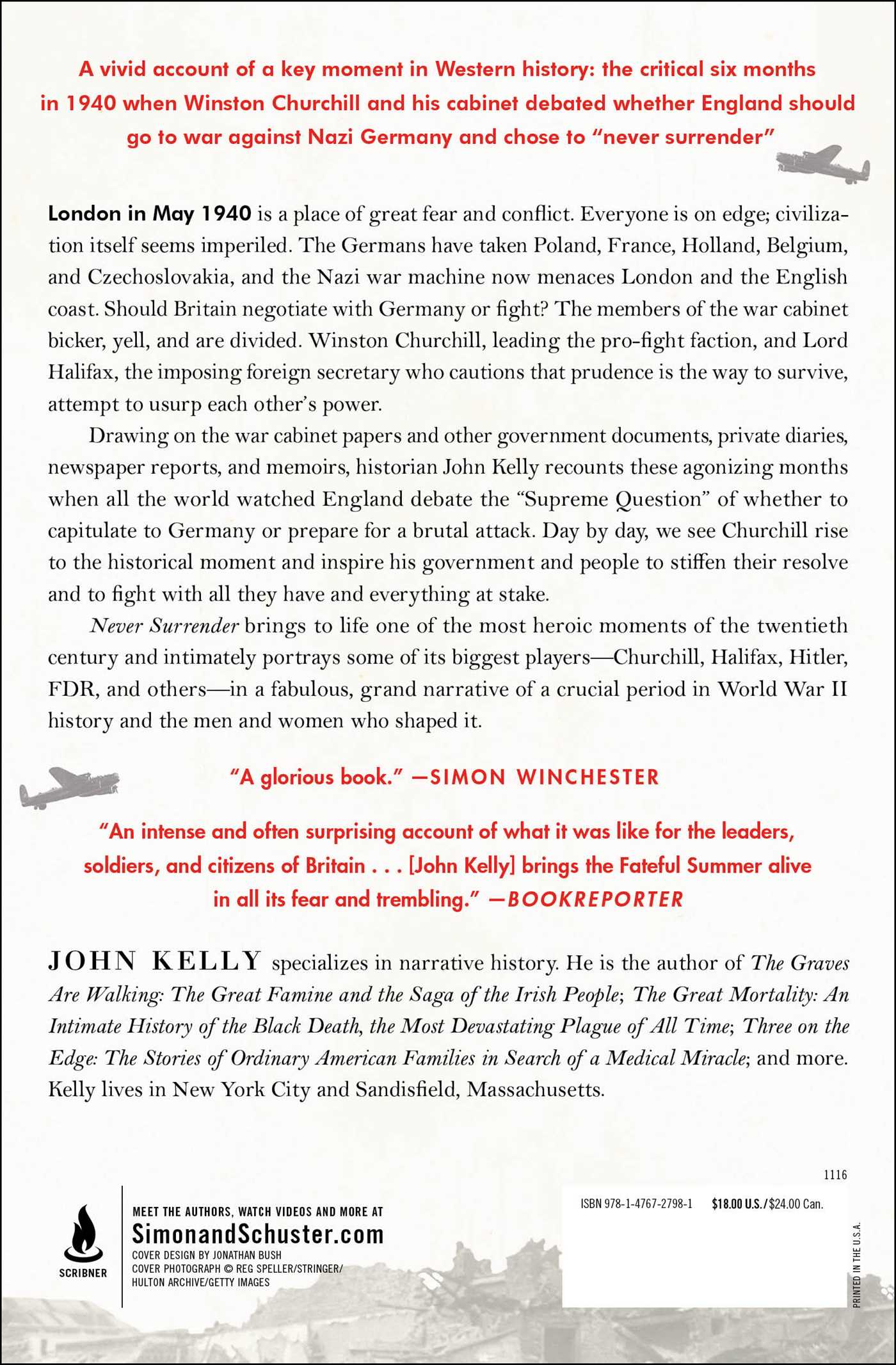 By John Kelly
LIST PRICE $18.00
PRICE MAY VARY BY RETAILER

“WWII scholar John Kelly triumphs again” (Vanity Fair) in this remarkably vivid account of a key moment in Western history: The critical six months in 1940 when Winston Churchill debated whether England should fight Nazi Germany—and then decided to “never surrender.”

London in April, 1940, is a place of great fear and conflict. The Germans have taken Poland, France, Holland, Belgium, and Czechoslovakia. The Nazi war machine now menaces Britain, even as America remains uncommitted to providing military aid. Should Britain negotiate with Germany? The members of the War Cabinet bicker, yell, and are divided. Churchill, leading the faction to fight, and Lord Halifax, cautioning that prudence is the way to survive, attempt to usurp one another by any means possible. In Never Surrender, we feel we are alongside these complex and imperfect men, determining the fate of the British Empire, and perhaps, the world.

Drawing on the War Cabinet papers, other government documents, private diaries, newspaper accounts, and memoirs, historian John Kelly tells the story of the summer of 1940. Kelly takes readers from the battlefield to Parliament, to the government ministries, to the British high command, to the desperate Anglo-French conference in Paris and London, to the American embassy in London, and to life with the ordinary Britons. We see Churchill seize the historical moment and ultimately inspire his government, military, and people to fight. Kelly brings to life one of the most heroic moments of the twentieth century and intimately portrays some of its largest players—Churchill, Lord Halifax, Hitler, FDR, Joe Kennedy, and others. Never Surrender is a fabulous, grand narrative of a crucial period in World War II and the men and women who shaped it. “For lovers of minute-by-minute history, it’s a feast” (Huffington Post). 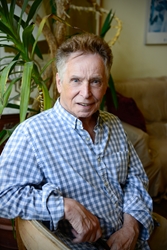 John Kelly specializes in narrative history. He is the author of The Graves Are Walking: The Great Famine and the Saga of the Irish People; The Great Mortality: An Intimate History of the Black Death; The Most Devastating Plague of all Time; Three on the Edge; and more. Kelly lives in New York City and Sandisfield, Massachusetts.

“For lovers of minute-by-minute history, [Never Surrender] is a feast.”

“With his masterly touch at bringing history alive, John Kelly makes his readers feel as though they are in anxious London during the fateful days of 1940. Never Surrender brims with dozens of illuminating scenes accompanying the unforgettable presence of Winston Churchill and his indomitable will.”

– David Maraniss, author of Once in a Great City: A Detroit Story

"This is an outstanding, gripping read by a popular historian. It blends colorful biographies, pungent anecdotes and a solid grasp of the great strategic issues that weighed on decision-makers in 1940.'

– Geoffrey Wawro, author of A Mad Catastrophe: The Outbreak of World War I and the Collapse of the Habsburg Empire

By John Kelly
LIST PRICE $18.00
PRICE MAY VARY BY RETAILER