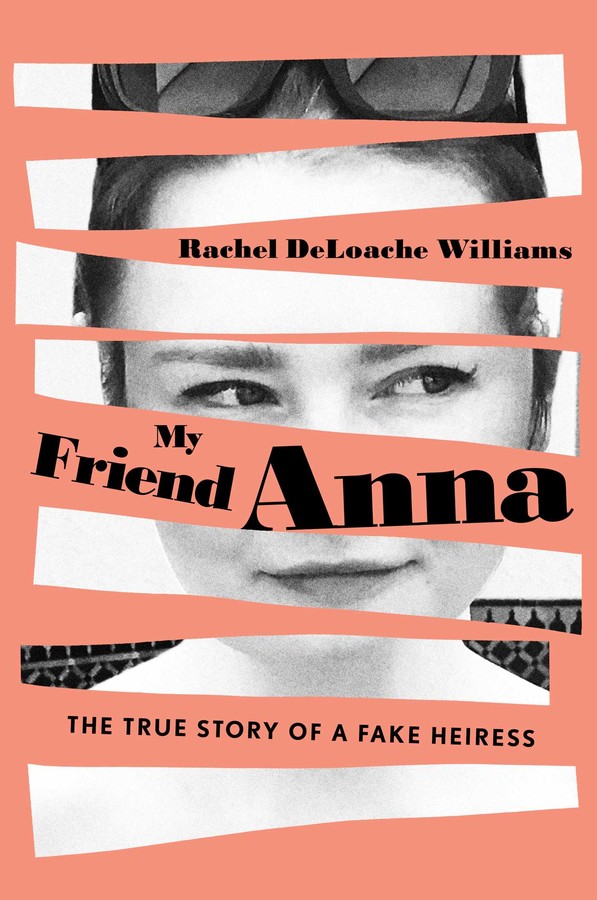 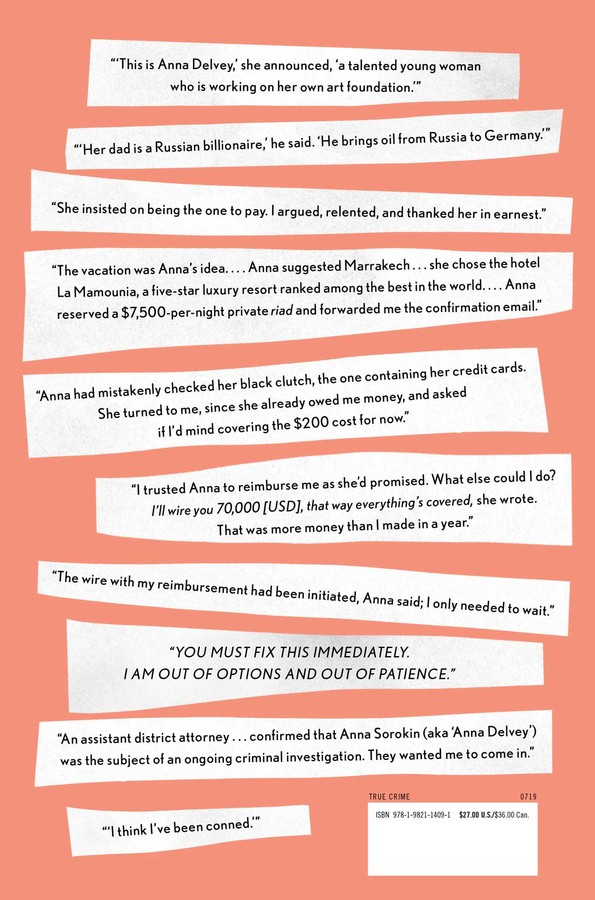 ONE OF TIME’S 100 BEST BOOKS OF THE YEAR

Sex and the City meets Catch Me if You Can in the astonishing true story of Anna Delvey, a young con artist posing as a German heiress in New York City—as told by the former Vanity Fair photo editor who got seduced by her friendship and then scammed out of more than $62,000.

When Anna proposed an all-expenses-paid trip to Marrakech at the five-star La Mamounia hotel, Rachel jumped at the chance. But when Anna’s credit cards mysteriously stopped working, the dream vacation quickly took a dark turn. Anna asked Rachel to begin fronting costs—first for flights, then meals and shopping, and, finally, for their $7,500-per-night private villa. Before Rachel knew it, more than $62,000 had been charged to her credit cards. Anna swore she would reimburse Rachel the moment they returned to New York.

Back in Manhattan, the repayment never materialized, and a shocking pattern of deception emerged. Rachel learned that Anna had left a trail of deceit—and unpaid bills—wherever she’d been. Mortified, Rachel contacted the district attorney, and in a stunning turn of events, found herself helping to bring down one of the city’s most notorious con artists.

With breathless pacing and in-depth reporting from the person who experienced it firsthand, My Friend Anna is an unforgettable true story of money, power, greed, and female friendship.

Rachel DeLoache Williams was born and raised in Knoxville, Tennessee, and is a graduate of Kenyon College. In 2010, she moved to New York City and landed her dream job in the photo department of Vanity Fair, where she helped produce photo shoots, including those for the annual Hollywood and New Establishment issues, and worked with the magazine’s leading photographers and iconic subjects. My Friend Anna is her first book.

"My Friend Anna is sensational."
– Bustle

“My Friend Anna is the dishy story you've been craving ever since Anna Delvey first made headlines…a harrowing account of what it's like to be conned.”
– Refinery29

“If you gobbled up every last detail of the Anna Sorokin ‘Fake Socialite’ trial this spring (and really, who didn’t?), your addictive summer beach read has arrived.”
-New York Post

“…a behind-the-scenes look at the [Anna Delvey] scam and how she got away with it...until she didn't. This one's nonfiction but feels too wild to be true.”
-The Skimm

“It started out as an article in Vanity Fair and ended up a national obsession. Read for an inside look at NYC’s elite - and a lesson in how people aren’t always what they seem.”
-The Skimm

“Beach reads should be light, fun, and serve a lot dish. That’s why number one on my summer reading list is My Friend Anna: The True Story of a Fake Heiress by Rachel DeLoache Williams.”
– Town & Country

“…the Sorokin scam [has] everything: glamour, greed, lust for power, great clothes (or at least expensive ones), rich people being ripped off, cameos by fellow millennial con artists like ‘Pharma Bro’ and the Fyre Festival organizers, and lots of satisfying clichés about the rotten core of the Big Apple.”
- The New York Times

“…the gritty, glittery story of the woman who defined the Summer of Scam.”
– Bustle

“…a thrilling tell-all that I have no doubt will be one of the most talked-about releases this summer!”
– Audible.com

"My Friend Anna is a powerful account of Anna Delvey’s life and crimes, but also a searching portrait of confidence artists and hustlers at large, and the kinds of communities that seem especially vulnerable to them."
– CrimeReads.com

“William's book is a detailed retelling of her experience, building far beyond the initial account she published in Vanity Fair in April 2018.”
-Insider

“I’m embarrassed to say how much I enjoyed it.”
-Entertainment Weekly