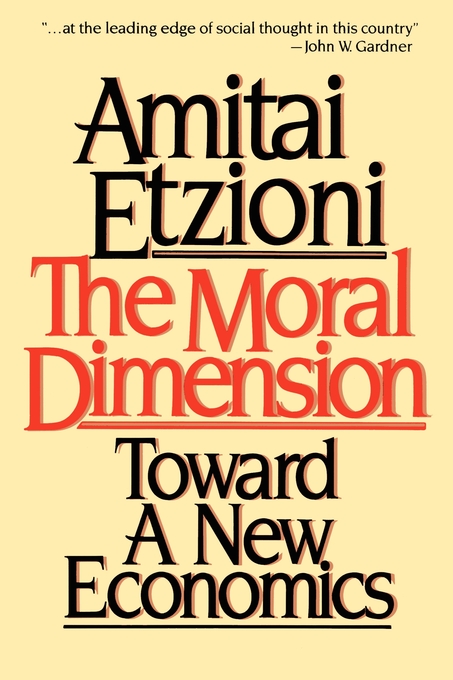 Toward a New Economics

By Amitai Etzioni
LIST PRICE $14.99
PRICE MAY VARY BY RETAILER

Blending elements of psychology, philosophy, and sociology with economics, Etzioni presents a bold new vision of the social sciences - one which proposes that broader moral, social and political concerns modify economic behaviour and shape individual decision-making. In establishing the necessitary of moral and social considerations in economic behaviour, he provides a provocative new framework for a more comprehensive, ethical and realistic approach to the social sciences today.

John W. Gardner Former Secretary of Health, Education and Welfare The Moral Dimension: Toward A New Economics is at the leading edge of social thought in this country. It may be the most important book of the year.

Alan Lewis Journal of Economic Psychology This is a book I will keep close to my desk and refer to often. It is packed with ideas eloquently expressed, if something new is to happen in economics (i.e., the emergence of a more behavioral, social, psychological economics), because of its wide appeal, this book will rank high among those providing the necessary momentum for change.

Aaron Wildavsky University of California, Berkeley A seminal work that will help change our ideas about how the world works.

Harvey Cox Harvard Divinity School Shows that unless economics and moral values are considered together, we will understand neither. Etzioni has built a sturdy bridge not only between economic theory and the humanities, but between economics and the entire cluster of disciplines that deals with human valuing and choosing. Although he signals some real dangers in continuing to apply outmoded rationalistic models, he also sketches the encouraging vision of a new economics that is once again integrated into a wider human enterprise.

Toward a New Economics

By Amitai Etzioni
LIST PRICE $14.99
PRICE MAY VARY BY RETAILER