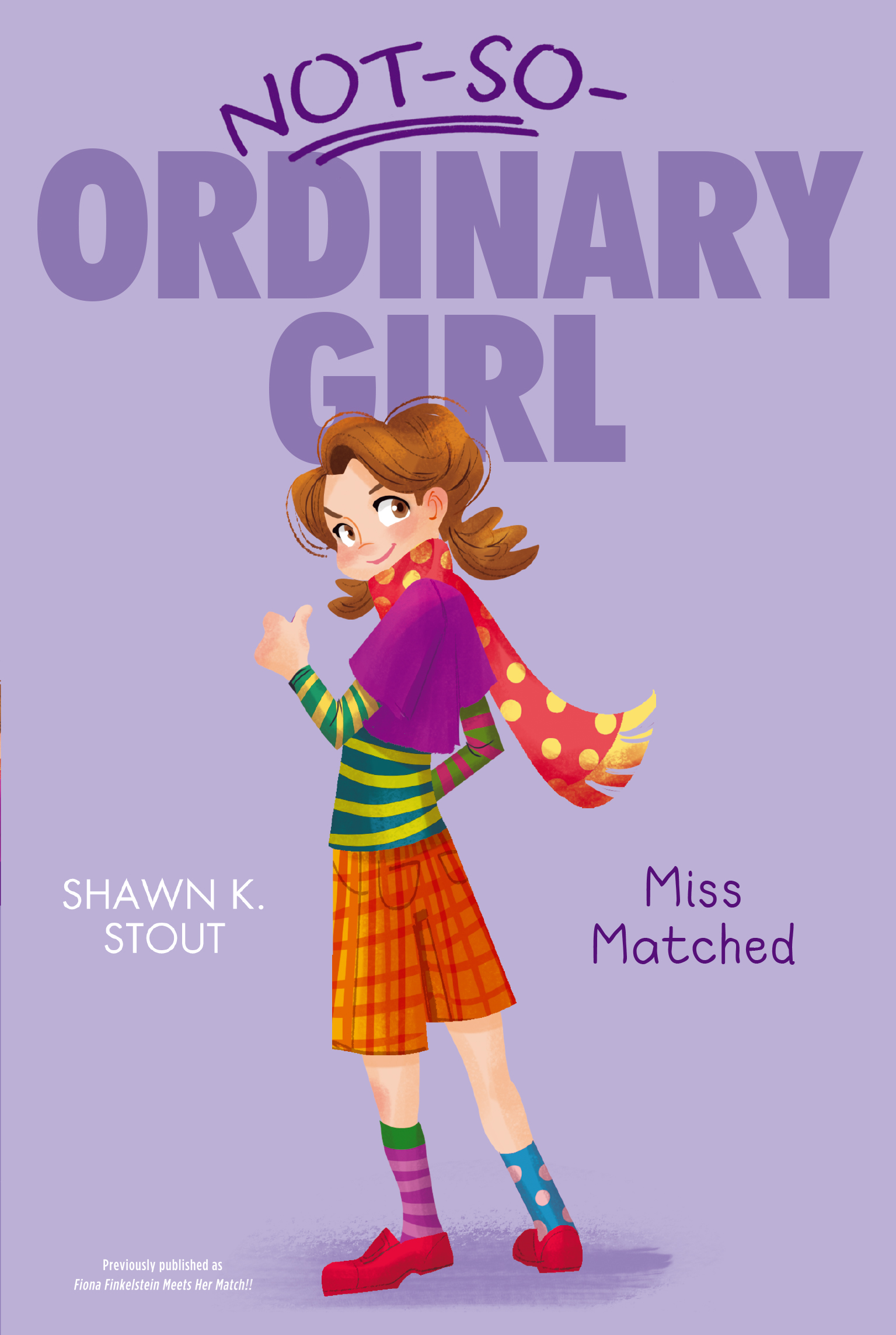 Fiona Finkelstein tries her hand at making matches in this second book of the lively and lovable Not-So-Ordinary Girl trilogy.

Fiona has proved herself as a ballerina, but she’s got other talents as well. Such as…matchmaking? Maybe. She sets out to start a club with her friends and classmates to pair people with things and activities they might enjoy, but the results aren’t quite what she hoped for. It turns out Fiona is much better at match-BREAKING…


Fiona Finkelstein had a bad feeling.

It was the kind of feeling she got when she just knew that Mrs. Miltenberger packed a corned beef sandwich in her lunchbox, even though she’s told her a gazillion times that she HATES corned beef more than she HATES anything else. Especially after learning that there was actually no corn in it. If there was one thing Fiona flat-out could not stand, it was food that lies.

Fiona didn’t know exactly why she was having this feeling today. Maybe because today was the day Mr. Bland, her fourth-grade teacher, was going to draw names for new classroom jobs. For months, Fiona wanted to be picked for electrician. But no matter how tightly she crossed her fingers, Mr. Bland always pulled somebody else’s name out of the bucket.

She tapped her green Thinking Pencil on her desk and looked at her best friend, Cleo Button, and Harold Chutney next to her. “I’ve decided if I don’t get to be electrician this time, I’m going to stop taking baths.”

“What will that do?” asked Cleo.

“I’ll have so much stink on me that Mr. Bland will have to give me the job next time,” said Fiona. “I’ll tell him that he’ll be smelling my stink until he pulls my name out of that bucket.”

“Good idea,” said Cleo, cracking her knuckles. “I hope I get to be line leader.”

Harold pulled his finger out of his nose. “I want to be gardener.”

“Gardener?” said Fiona and Cleo at the same time.

“That’s the worst job there is,” said Fiona. “There’s only one plant that you get to water, and it’s a cactus.”

Harold shrugged. “What’s so great about being electrician?”

Fiona shook her head. “It’s only the best job ever. You get to plug in the TV and overhead projector. And work the DVD player.”

“And turn off the lights,” said Cleo, who was electrician the time before last.

“So?” said Harold, wiping his finger under his desk.

Fiona sighed. Besides being a nose-picker, Harold was the only kid she knew who said things like “Oh, Boise Idaho” and who didn’t like cool things like plugs. Sometimes Fiona thought about the possibility that Harold was really an old lady disguised in a boy suit.

The bell rang just then. “Everybody quiet down,” said Mr. Bland. “Before we get started, Principal Sterling is here with an important announcement.”

“Good morning, everyone,” said Principal Sterling. Her high heels clicked as she walked to the front of the classroom. A boy trailed close behind. He was tall and had spiky hair that made him even taller. “I’d like to introduce a new student who is joining your class.” She put her hand on the boy’s shoulder. “This is Milo Bridgewater, and he’s just moved here to Maryland all the way from Minnesota.”

The new boy, Milo, stuffed his hands into his pockets and looked down at his feet. Fiona was trying to remember where Minnesota was because there were lots of M-states and she got them all mixed up. It occurred to her then that Milo also starts with M and wasn’t that funny. Fiona wondered why there weren’t any states that started with F and wasn’t that unfair. And then she thought of one. “Florida!” she shouted in excitement.

Everyone looked at her. And then they cracked up. Except for Mr. Bland and Principal Sterling. And Minnesota Milo.

Fiona looked around. “Did I say that out loud?”

“Apparently,” said Mr. Bland, clearing his throat. “Is there something you wanted to say about Florida?”

“I was just thinking how Florida begins with F like Fiona,” she explained, “the same way that Minnesota begins with an M like, you know, Milo?” Fiona’s voice got softer as she got to the end of her explanation and realized how dumb she sounded. Why was it that the thoughts in her head seemed really smart until she said them out loud?

Everybody laughed again. Except for Mr. Bland and Principal Sterling. And Milo. They just stared at her.

Mr. Bland took a deep breath and sighed. Then he shook Milo’s hand and said, “Welcome to Ordinary Elementary.” He pointed to the empty desk next to Fiona’s. “You can take your seat there.”

As Milo reached his desk, he looked at Fiona and scowled. Fiona didn’t know what she had done to deserve such a look from somebody she hadn’t even talked to yet. But since she was not the kind of girl to let a scowl go unanswered, she shot back with an over-the-shoulder Doom Scowl, with medium doom.

“We’re finishing up a lesson on measurements, and I’m afraid we won’t have your books until later this week,” Mr. Bland said to Milo. “But in the meantime, why don’t you share with your neighbor?”

Milo looked at Fiona. He shook his head and then turned around to Harold Chutney at the desk behind him.

“Oh, Boise Idaho,” said Harold, rubbing his nose, “you want to share with me?”

“Cool beans,” said Harold. “I like your hairdo. How do you get it to stand up—”

“Milo,” said Mr. Bland, “you won’t be able to see the chalkboard if you’re turned around like that. Share with Fiona.”

They grow them rotten in Minnesota, Fiona thought.

Milo moved his chair slowly toward Fiona. She moved her math book exactly one-half inch in Milo’s direction. That was as far as she was going to go.

All during math, Milo turned the pages of Fiona’s book before she was ready. And each time she turned them back, he mumbled something under his breath. Something that Fiona couldn’t quite make out. Which made her grit her teeth.

The second math was over, Fiona pulled her book away, slammed it shut, and shoved it into her desk. Then she raised her hand. She couldn’t wait any longer. “When are you going to draw names for classroom jobs?” she asked when Mr. Bland called on her.

Mr. Bland sighed. “Fiona, whatever would I do without you?” Only he didn’t say it in a cursive-letters-on-a-greeting-card kind of way. He said it in a way that made her think Mr. Bland knew exactly what he would do without her.

“And so I don’t have to hear you ask a fourth time today,” he said, “let’s go ahead and draw the names now. But first we need to let Milo put his name in a bucket.”

“Oh,” said Fiona. She wasn’t counting on that.

“Milo,” said Mr. Bland, “there are several jobs available in this classroom. Courier, gardener, accountant, and so on. If you see a job you’d like to do, put your name on a piece of paper and drop it into that bucket. Each month we draw a new name.”

Milo went over to the Job Center. Fiona chewed on her Thinking Pencil as she watched Milo read the duties listed under each job. He took a gazillion years. Finally, he wrote his name on a slip of paper and dropped it into the bucket marked ELECTRICIAN.

“And now for the big moment,” said Mr. Bland, reaching into the first bucket marked COURIER. Fiona was busy crossing each of her fingers while Mr. Bland read off the names in each bucket. Only one bucket mattered to her.

“Wait!” Fiona said, as her pinkie slipped off her ring finger. She quickly recrossed them. “Okay, now I’m ready.” She watched Mr. Bland pull out a piece of paper and unfold it. As she watched, the corned beef feeling got so strong she could almost smell it.

Mr. Bland held up the paper. “Our new electrician is . . .” Fiona squeezed her crossed fingers tighter and whispered her own name. “. . . Milo Bridgewater.”

Shawn K. Stout is the author of the Not-So-Ordinary Girl series as well as the middle grade series Penelope Crumb. Stout has an MFA in Writing for Children and Young Adults from Vermont College of Fine Arts. She lives in Maryland with her husband, baby daughter, and two ancient dogs.