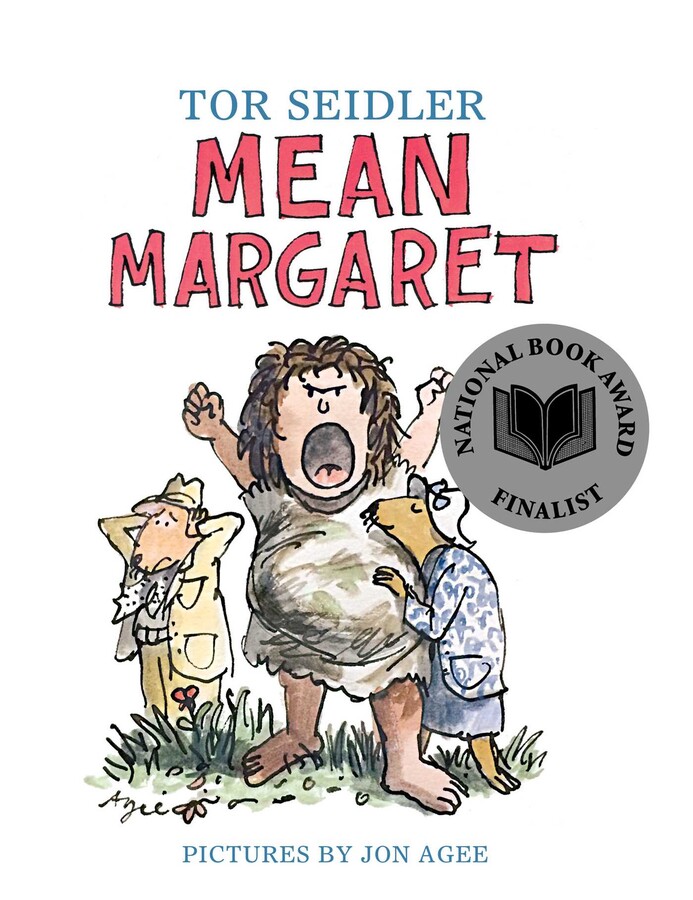 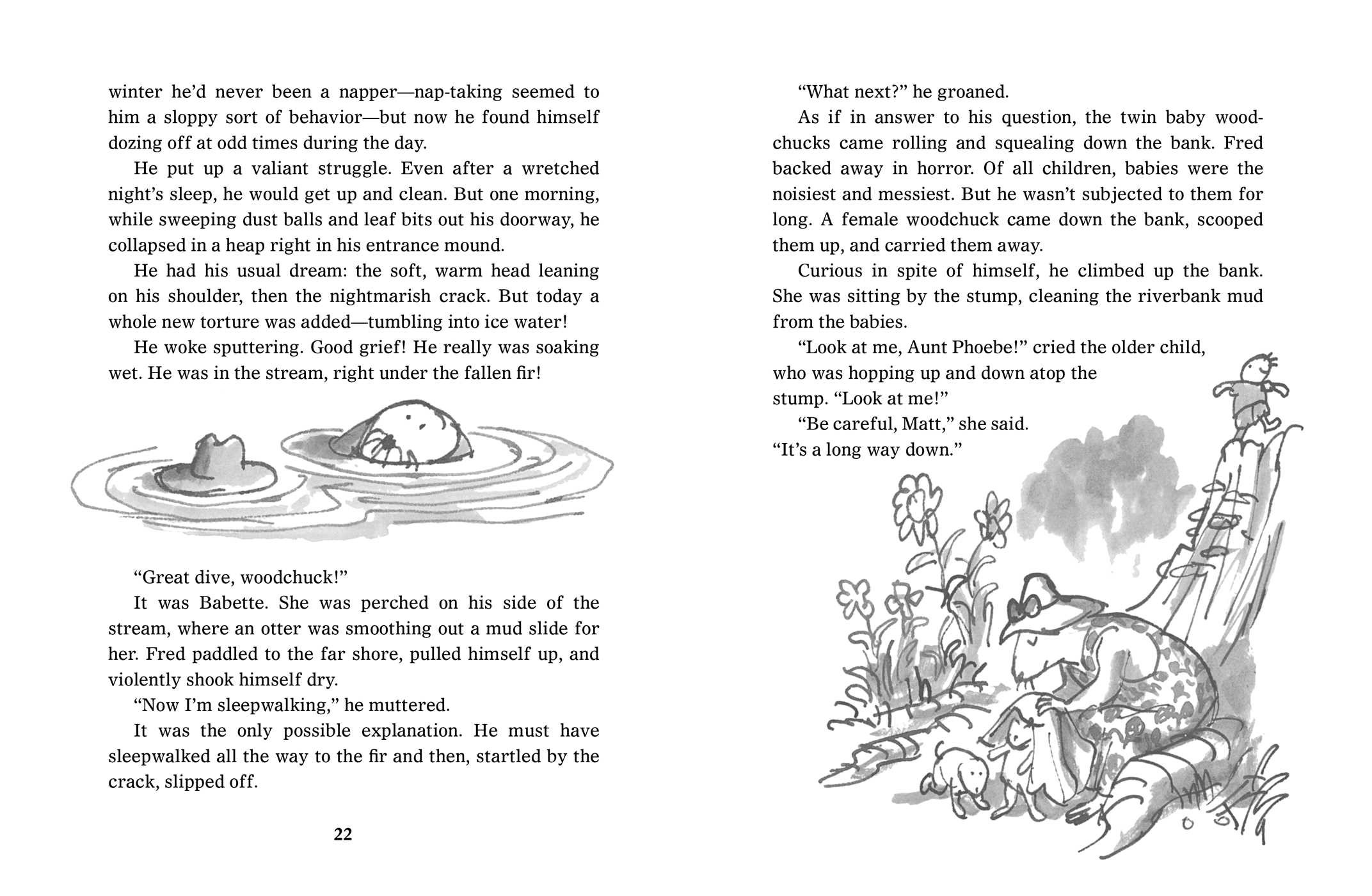 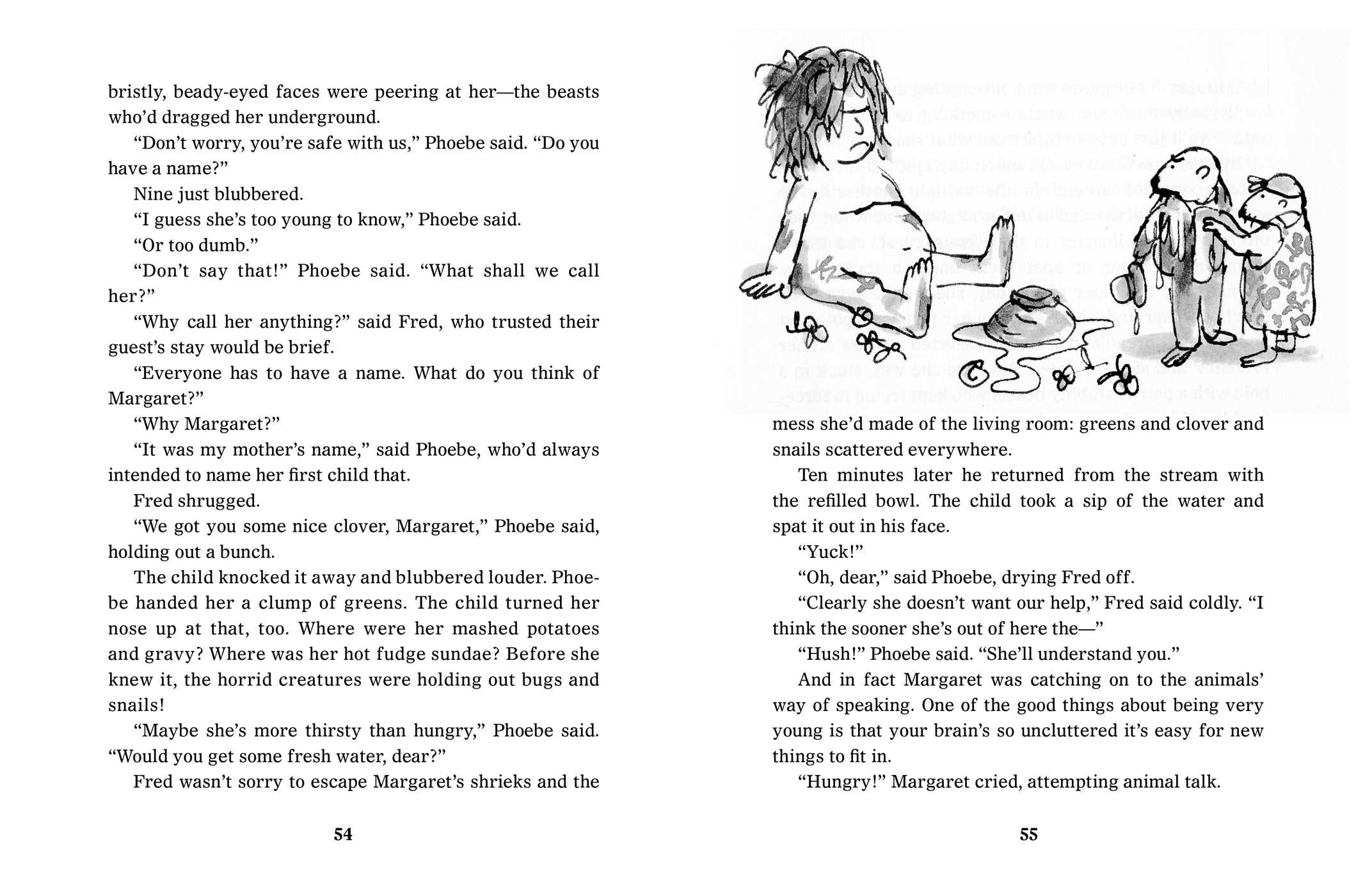 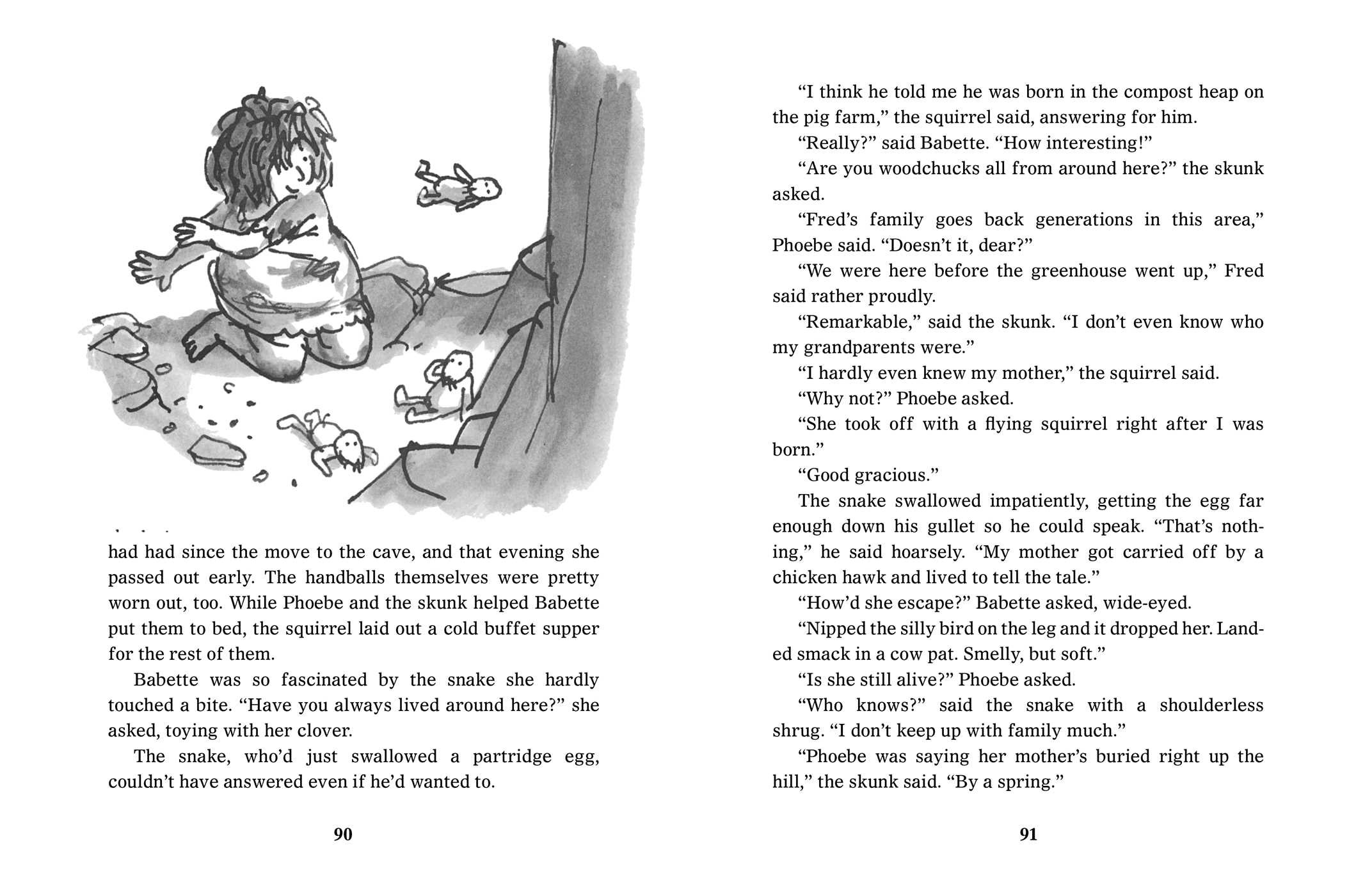 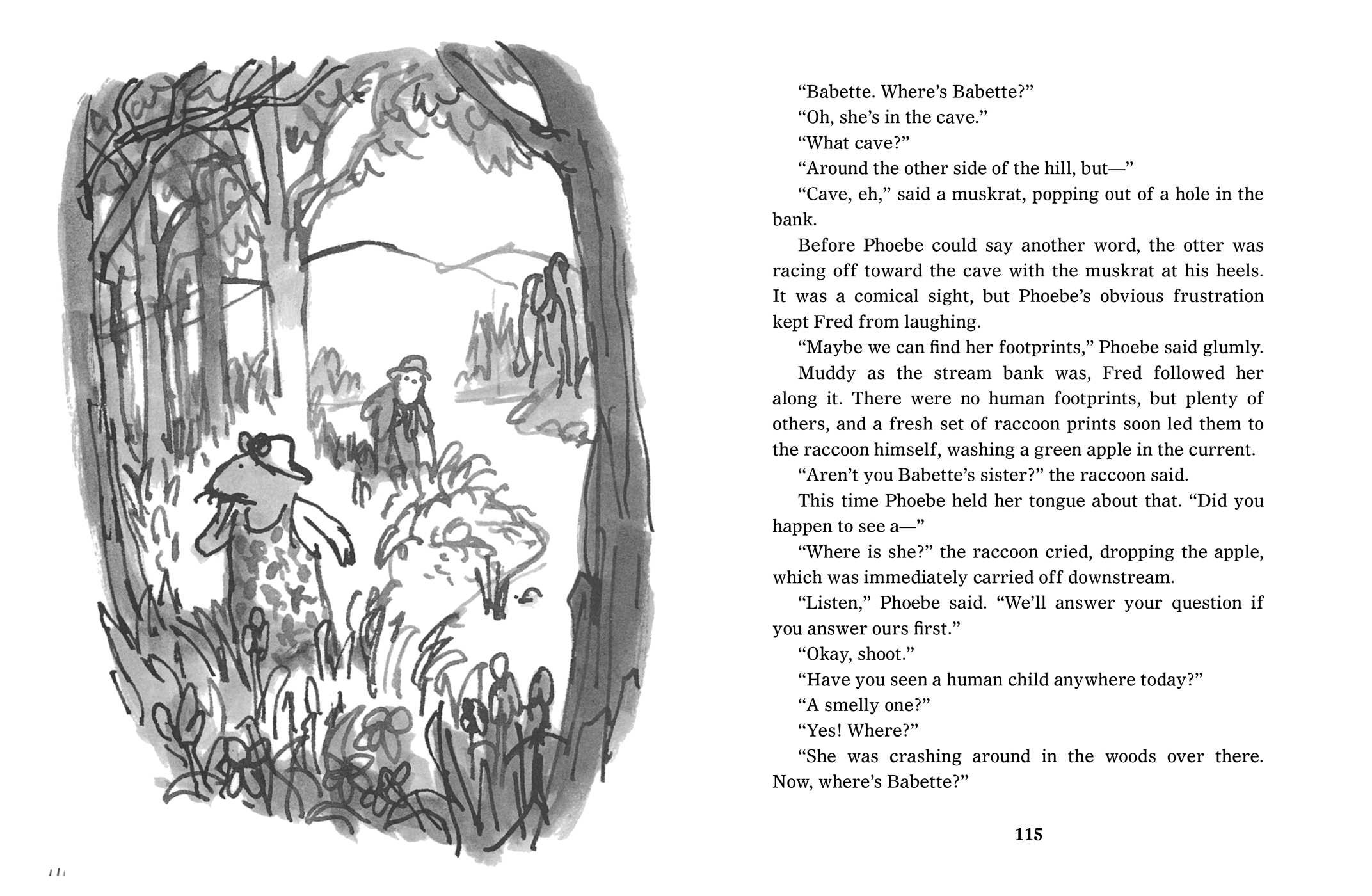 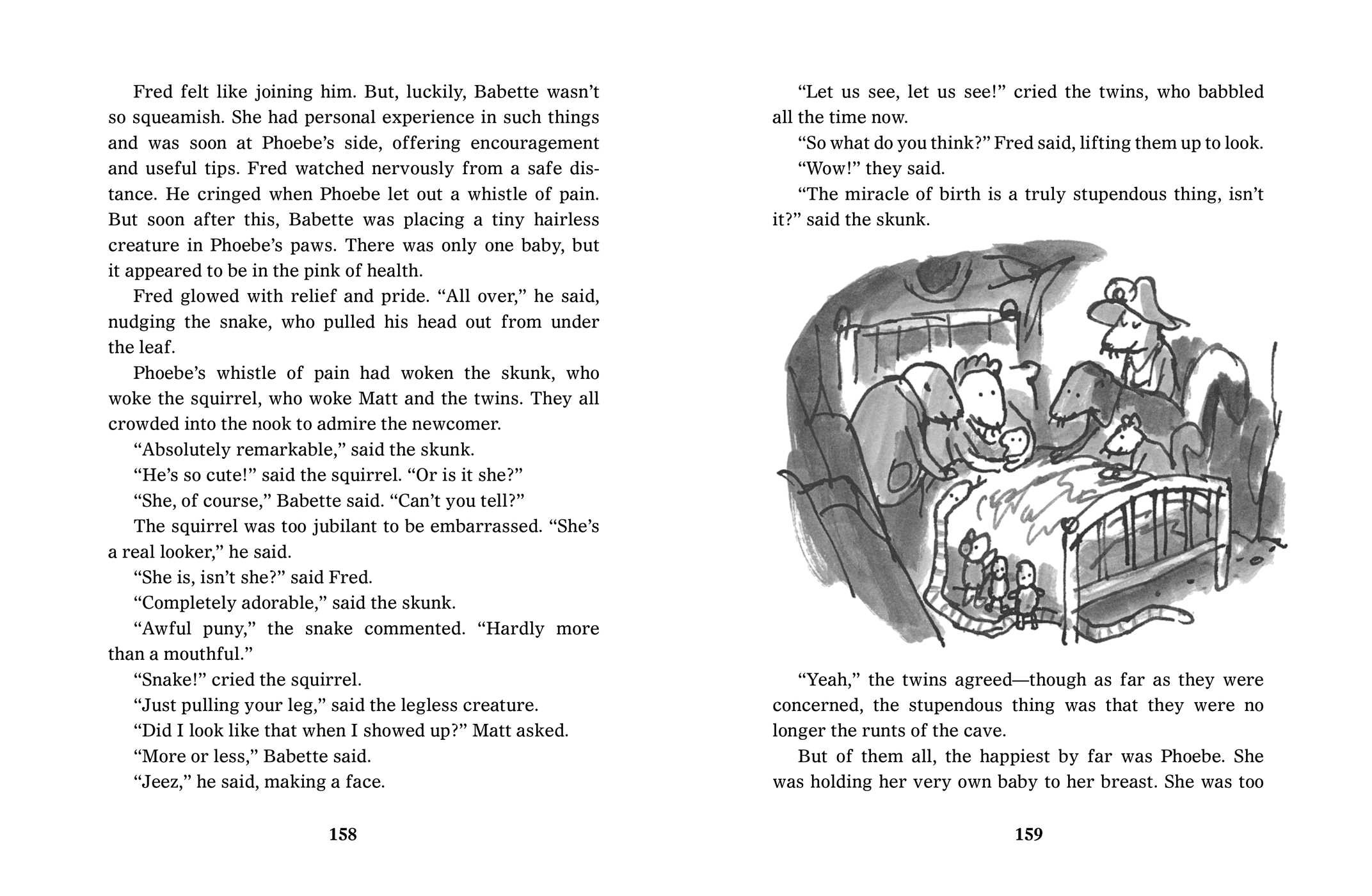 Unconditional kindness is the key in this National Book Award Finalist from the author of The Wainscott Weasel about nontraditional families, adoption, love—and a little peace and quiet.

Margaret is a mean, cranky human toddler from a family of nine. She is such a pain that her beleaguered parents chuck her out, and she’s on her own, grousing and grumping until two caring woodchucks, Phoebe and Fred, take Margaret in as their own. But despite their love, Margaret continues to wreak havoc with her loud, destructive ways, ruining the burrow and shrieking nonstop. Soon the woodchucks are as beleaguered as Margaret’s human parents were, but because love is more powerful than temper tantrums, they are determined to make it work. So they enlist a little unconventional help, and with the guidance of a snake, bats, and a skunk, their feral little human just might realize there’s more to life than being mean.

Mean Margaret A Cold Shoulder
One spring afternoon Fred was out foraging for food in the meadow when an inky cloud seeped over the sun. He was a good ways from his burrow—nearly to the pig farm, judging by the whiff of the sloppy beasts he’d just caught. Since there was nothing he hated more than getting his fur wet, Fred scampered up into a hole in a maple by the roadside. This required little effort—woodchucks are distant relatives of squirrels—but the hole was a dreadful mess.

When he poked his head out to look for something better, he was momentarily blinded by a flash of lightning. Then he was nearly deafened by a clap of thunder, and right after that a violent cracking sound set his very bones vibrating.

“Of all the rotten luck,” Fred said.

Stuck, Fred passed the time complaining about the filthy habits of woodpeckers. “Don’t they know what a broom is . . .” Being a woodchuck who lived alone, he often talked to himself. But he turned silent when a pair of fat, ugly human beings came running in under the tree.

“We’re soaked to the skin,” said the man, who had a big ham under his arm.

Fred held his nose. The odor of the human beings’ wet clothing wasn’t much better than the whiff of pig he’d gotten earlier.

“Nice break from the kids,” the man agreed.

Eventually the rain stopped and the sun returned, scattering the meadow with diamonds of light. But, to the woodchuck’s dismay, the fat, smelly people stayed put.

Fred noticed the rainbow, too. However, it was small comfort to him. For now Mr. Hubble put his free arm around Mrs. Hubble’s middle, and Mrs. Hubble leaned her head on Mr. Hubble’s shoulder.

“Good grief,” Fred said under his breath. “I’m going to be here forever.”

But rainbows rarely last very long, and when this one faded away, Mrs. Hubble let out a sigh and said, “I suppose we better head back. They’ll be turning the place upside down.”

As soon as the Hubbles waddled off down the road, Fred evacuated the nasty hole. He’d never been happier to get home—though, even so, he didn’t forget to wipe his feet thoroughly just inside the entrance mound. He took great pride in his burrow. It was the tidiest, most private place imaginable. Digging it had been the low point of his life—nothing soiled your paws like digging—but at least he would never have to go through that horror again. He’d gritted his teeth and dug extra deep, ensuring that he would never be subjected to the creeping of centipedes or the squawking of blue jays. The only time he was ever disturbed was when a certain striped snake chased some prey down his bolt hole. And this was only a minor annoyance, since the snake was a creature of few words—even when his mouth wasn’t full of frog or mouse.

Climbing the maple had mussed up Fred’s fur, so the first thing he did was carefully clean and brush himself. Then he sat down in his favorite armchair, the one by his jar of glowworms, and recovered from his ordeal, basking in the neatness, the dryness, the luxurious peace of his home. Instead of the glare of lightning, there was the soft glow of the worms. Instead of smelly human beings, there was the pleasant fragrance of his pine furniture. And instead of bone-vibrating cracks, there was sublime silence. He didn’t hear a single sound till his own stomach began to growl.

Fred padded into his kitchen and fixed himself a special treat: three snails on a bed of clover. After dinner, he began to feel pleasantly drowsy, and once he’d cleaned up the kitchen, he covered the glowworms with a leaf, crept into his bedroom, and snuggled into bed. He said his prayers, thanking heaven for giving him everything a woodchuck could possibly want, and closed his eyes.

The bed was nice and warm, so when a shiver went through him, he sat up in surprise. “Could I have caught cold in that miserable tree?” he asked himself. “It was damp.” He swallowed. “My throat’s not sore, though.”

Fred checked himself for swollen glands. None. The only thing out of the ordinary was a slight chill in his shoulder. He lay back down, burying his chilly shoulder under the covers. Suddenly he was a married woodchuck, with a wife who warmed his shoulder by leaning her head on it.

Fred woke up in alarm.

“Whew,” he said, realizing he was alone. “What a terrible dream!”

In the morning the dream seemed the height of silliness. “A wife, what a ridiculous idea,” he said as he did his sweeping. “How could you keep things just so with another woodchuck around?”

But come evening, the chill crept into his shoulder again, and that night the same dream woke him in the small hours. It became a nightly ritual—a nightly torture for a woodchuck who hated having his routine disturbed as much as Fred did. He tried everything he could think of: sleeping on his back, cutting out strong foods like mint and dandelion greens, counting field mice. But nothing helped. Time and again he sat bolt upright in his bed in the middle of the night, shuddering from the dream of being married. 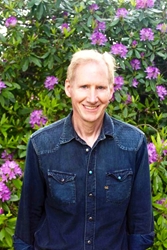 Tor Seidler is the critically acclaimed and bestselling author of more than a dozen children’s books, including Firstborn, The Wainscott Weasel, A Rat’s Tale, The Steadfast Tin Soldier, Gully’s Travels, and most notably Mean Margaret, which was a National Book Award Finalist. He lives in New York, New York.

Jon Agee is the illustrator of a large collection of children’s picture books, such as Little Santa, The Other Side of Town, Nothing, and most notably the National Book Award–nominated Mean Margaret. He lives in San Francisco with his wife.