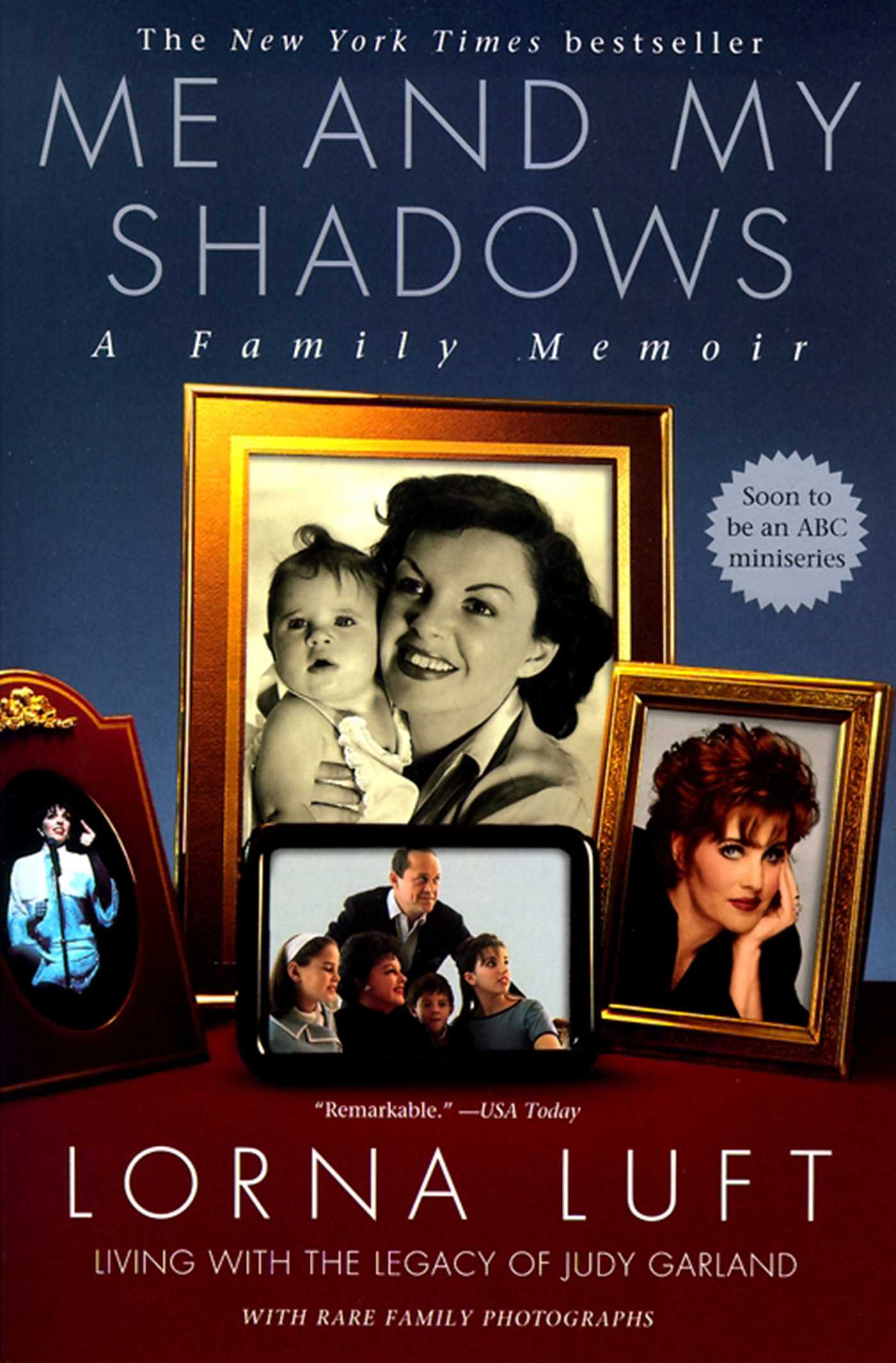 By Lorna Luft
LIST PRICE $11.99
PRICE MAY VARY BY RETAILER

The question follows Lorna Luft to this day: "What's it like to be Dorothy's daughter?" Although by appearances glamorous and truly thrilling, growing up as the daughter of Judy Garland was anything but a journey over the rainbow.
With unsparing candor, Lorna Luft offers the first-ever insider portrait of one of Hollywood's most celebrated families: a rare story of a little girl, her half-sister Liza, and her baby brother trying desperately to hang on to the mother whose life seemed destined to burn brightly but briefly. Lorna makes an extraordinary journey back into the spiral of love, addiction, pain, and loss that lurked behind a charmed facade.
Filled with behind-the-scenes dramas, hilarious untold stories, and little-known details of Garland family life, Me and My Shadows is a tribute to Lorna's victory over her own past, a story of hope, of love and its limitations, and a deeply moving testament to the healing powers of embracing one's past and charting a course of self-love and discovery.

When I drive with Jesse and Vanessa, my son and daughter, through the old Los Angeles theater district today, Baby Gumm and the Meglin Kiddie Shows she was featured in seem like part of another century to me. What was once one of the most glamorous sections of Los Angeles is now a rundown street filled with seedy stores displaying gawdy gowns that my mother's most ardent crossdressing fans wouldn't be caught dead in. One five-block section of Broadway still houses the remains of the theaters my mother once performed in or went to on Saturday afternoons with her mother: The Orpheus is still in pretty decent shape, its battered old marquee advertising Madonna in Evita. The Rialto is now a discount store (five shirts for $10), and the letters that announce the Loew's State barely cling to the old brick building -- its facade crumbled away under the shock of too many earthquakes.
Our parents' lives always seem so long ago, so far removed from our own. It's impossible to really comprehend that they were ever children, too. When I show Vanessa pictures of myself as a child, she smiles sweetly but uncomprehendingly. What does the little girl twirling in a television studio have to do with her mommy? The child in the picture is light-years away from Vanessa's world. But our parents were children, not so long ago, and their lives continue to interlock with ours until the day we die, as my life will always be a part of my son's and my daughter's. I am aware of this every time I look at my little girl and see my mother's face peering back at me, every time I see a picture from The Wizard Of Oz or hear my mother's young voice on an MGM recording. It's remarkable, really, how much of our life begins before we're even born. When I look at my mother's family, I'm amazed at the patterns that have been repeated in my life.
Generation after generation, we all seem to be born singing, to one degree or another. Childhood friends of my grandfather's say he was always whistling or singing. As for me, I could always sing better than my friends, and I could always follow the line of a melody and reproduce it on my own. Both of my children have the same innate musical talent, my daughter to a remarkable degree. It's strange indeed to consider bow many of my mother's best-known moments in film were a replay of her parents' real-life experiences, from vaudeville to broken hearts.
Yet, in direct contradiction of each generation's advice, we all seem to be wedded to show business. My grandfather fought long and hard to keep my mother from becoming a "professional kid." Mama, in turn, always tried to talk us out of going into show business.
"You'll break my heart," she'd tell us. "I don't want to watch you go through what I went through." Yet Liza and I both make our living singing, and as my mother did with me, I tell my own kids not to go into show business. But blessing or curse, we all seem driven to perform, in part because it's all we really know how to do. When I was a little girl, the only TV show I could relate to was I Love Lucy because Ricky was a performer. The "normal" families might as well have been from Mars. I used to ask myself what on earth I would do if I couldn't make a living in show business. I still don't have an answer.

I see other patterns, too: the women in our family can't seem to stay away from musicians. My sister married one; I married two. My grandmother Ethel married a musician. So did both my maternal aunts, twice. So did my mother, the first time. I'm no different. My first great love as an adult was singer Barry Manilow, and I fell in love with him as much for his music as anything else. My ex-husband, Jake Hooker, was a rock guitarist. My husband, Colin Freeman, is an arranger-conductor.
There's also the pattern of one family member serving as manager for another. just as my grandmother managed her children's careers, and my father managed my mother's career, Jake managed mine. And just as it destroyed my grandmother's and parents' relationships, it caused problems for Jake and me too. Somehow none of us seems able to keep family and business separate.
Luckily, some good things got passed down, too. Just as my grandfather Frank was there for Mama, my father was always there for me, the port in every storm. Whether she realized it or not, my mother did just as well in picking a father for me as Grandma Ethel did picking a father for Mama.
Most important of all, my family passed on a lot of love. Whatever marital struggles we may have, we love our children fiercely. My grandparents had a hard time later in their marriage, just as my parents did, but they gave their kids a lot of love. They may not always have done the right thing for their kids, but it wasn't because they didn't love them. I always knew my mother loved me, loved us, more than anything else in life. Everything I know about being a good mother to my children I learned from her.
Did our parents love us? Damn right they did. That's another family tradition.

I wonder sometimes what would have happened to us all if Mama had just stayed Baby Frances Gumm, daughter of Frank and Ethel Gumm of Lancaster. But she didn't. She became Judy Garland. She became a legend.

Lorna Luft made her television debut singing "Santa Claus Is Coming to Town" on her mother's 1963 Christmas special. She has appeared on and off Broadway in Lolita, Promises, Promises, and Snoopy; in national tours of Grease, They're Playing Our Song, and Guys and Dolls; at the Rainbow Room, the Hollywood Bowl, and the White House; in the television series Trapper John, M.D., and Caroline in the City; and as Paulette in the movie Grease 2. She lives in Los Angeles with her husband, son, and daughter.

Baltimore Sun A remarkable candid memoir...Luft's own life is testament to her resilience.

Marlee Matlin I couldn't put it down until the last page. Bravo to Lorna for having the courage to break the silence about the pain, laughter, and tears.

New York Post A loving memory of growing up in a dysfunctional household.

Newark Star Ledger Other biographies have documented Garland's spectacular descent, but this is the first view from inside the tornado...Harrowing.

Houston Chronicle The first gripping, factual acount of the life and times of the late, great Judy Garland and her children.

By Lorna Luft
LIST PRICE $11.99
PRICE MAY VARY BY RETAILER