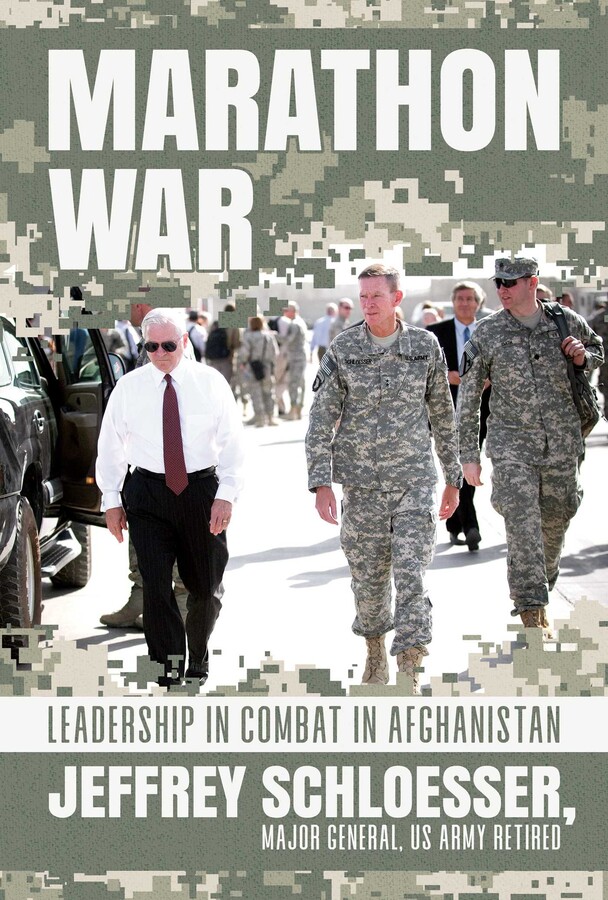 Leadership in Combat in Afghanistan

From Major General Jeffrey Schloesser—former Commanding General of the 101st Airborne Division and Regional Command-East—comes a revealing memoir of leadership in the chaos and fog of the Afghanistan War.

War is the most brutal of human endeavors, and I have experienced enough war to know to take cover when politicians and poets and armchair warriors speak extravagantly of patriotism and national honor.

Join Major General Schloesser in the daily grind of warfare fought in the most forbidding of terrain, with sometimes uncertain or untested allies, Afghan corruption and Pakistani bet hedging, and the mounting casualties of war which erode and bring into question Schloesser’s most profoundly held convictions and beliefs. Among several battles, Schloesser takes readers deep into the Battle of Wanat, where nine U.S. soldiers were killed in a fierce, up-close fight to prevent a new operating base from being overrun. This encounter required Schloesser to make tactical decisions that had dramatic strategic impact, and led him to doubts: Can this war even be won? If so, what will it take?

This book is a rare insight and reflection into the thoughts of critical national decision-makers including President George W. Bush, Secretary of Defense Robert Gates, then Senator Barack Obama, and numerous foreign leaders including Afghan President Hamid Karzai. Key military leaders—including then Chairman of the U.S. Joint Chiefs of Staff Admiral Michael Mullen, then Central Command Commanding General David Petraeus, then Lieutenant General and future Chairman Martin Dempsey, and International Security Force Commander General David McKiernan—all play roles in the book, among many others, including Chairman of the Joint Chiefs General Mark Milley and Army Chief of Staff General James McConville. Analyzing their leadership in the chaos of war Schloesser ultimately concludes that successful leadership in combat is best based on competence, courage, and character.

Jeff Schloesser is a retired Army Major General who commanded the 101st Airborne Division for thirty-three months, including fifteen months in combat in Afghanistan. In his thirty-four year Army career he served in Afghanistan, Iraq, Kosovo, Albania, Kuwait, Haiti, Jordan, Korea, and twice in Germany.

He was an assistant division commander in the 101st Airborne Division in Iraq 2003-04, the first Global War on Terrorism Planning Director in the Pentagon after 9/11, and the first Deputy Director at the National Counterterrorism Center for Strategic Operational Planning.

An aviator, Jeff commanded two battalions of the 160th Special Operations Aviation Regiment and a brigade task force in Albania and Kosovo.

He resides with his wife Patty in Park City, Utah, and northern Virginia. He has completed thirty-eight marathons.

“A deeply personal, powerfully insightful, and sometimes disturbingly candid account of command in combat by one of his generation’s most thoughtful warrior-leaders. Jeff Schloesser captures the frustrating complexity of Afghanistan and the challenge of fighting America’s longest war brilliantly. A must read for those who want to understand leadership in the toughest of environments.”

– Stanley A. McChrystal, U.S. Army, GEN (Ret.), Commander of US and ISAF forces in Afghanistan

"Major General Jeff Schloesser has written a gripping account of his fifteen months commanding the 101st Airborne Division during the toughest days of America's long war in Afghanistan. Schloesser eloquently and candidly writes about being a senior commander at war, making decisions that likely will result in soldiers wounded and killed while simultaneously dealing with the political challenges of dealing with higher headquarters and senior echelons of the American, Afghan and Pakistani governments. Marathon War is compelling and honest, telling the story of men and leaders in battle, the 'filth and gore,' the camaraderie, and the impact of soldiers' absence on the families left behind—including his own. Jeff Schloesser was a great commander. This book makes clear why."

"Marathon War transported me straight back to the year I spent learning to be a general officer from Major General Jeff Schloesser and his 101st Airborne team in Afghanistan. Jeff artfully recounts the story of people, places, and events to explore the challenges, complications, and responsibilities of leading counter insurgency operations on the other side of the world. You'll leave with a better understanding of both the choices and decisions that shaped our longest war and the human toll it took on the extraordinary men and women who fought it...and are still processing it."

"If you truly want to understand the nature of wartime leadership; the heartache, the elation, the fear, the sense of frustration and the great pride of leading America's men and women in combat, then you must read Jeff Schloesser's Marathon War. No one tells the story better."

“A lot has been written about Afghanistan, but Jeff Schloesser’s Marathon War offers something different. The very personal reflections of a most thoughtful senior commander help us better understand the strategic context and consequences of America’s longest war, but also offers insights into the incredible stories, tragic and heroic, of those involved. Jeff reminds us that, while politicians make the big decisions about war, it is soldiers and their families who bear the brunt of those decisions.”

“Marathon War is a dramatic account by a unique leader. General Jeff Schloesser led our effort to develop the nation’s first war plan for the global war on terror (GWOT). Incorporating all elements of national power, it was debated by the cabinet and approved personally by President George W. Bush. He then put on his cleats, jumped on the field, and executed it for fifteen hard and bloody months in Afghanistan. This book focuses on leadership at the tip of the spear. It is a fascinating and moving account of implementing grand strategy at the tactical level on the ground, where death and destruction are constant companions. It is a must read for those who labor in either vineyard, as well as a solid reminder for all that character is the sine qua non of effective leadership.”

“There have been several books written about leadership, and specifically leadership in combat, but Jeff Schloesser’s Marathon War is an absolute must read to understand senior level command in war. It tells the riveting story of commanding for fifteen months in Regional Command-East, the most lethal region of Afghanistan. It masterfully provides the rich detail and insight into the trials and tribulations of how a senior leader must assimilate volumes of information, calculate risk to mission and risk to force, and ultimately make decisions that put men and women into harm’s way. Despite having a dedicated staff and other subordinate commanders to provide their insight, their assessment of the intelligence, and despite innovations in technology and superior equipment, the ultimate decision rests with the commander. Jeff provides an intimate account of ‘the interpersonal struggles’ that senior leaders are challenged with in the most complex situations. Leaders in any profession who choose to be relevant need to read this account.”

Leadership in Combat in Afghanistan