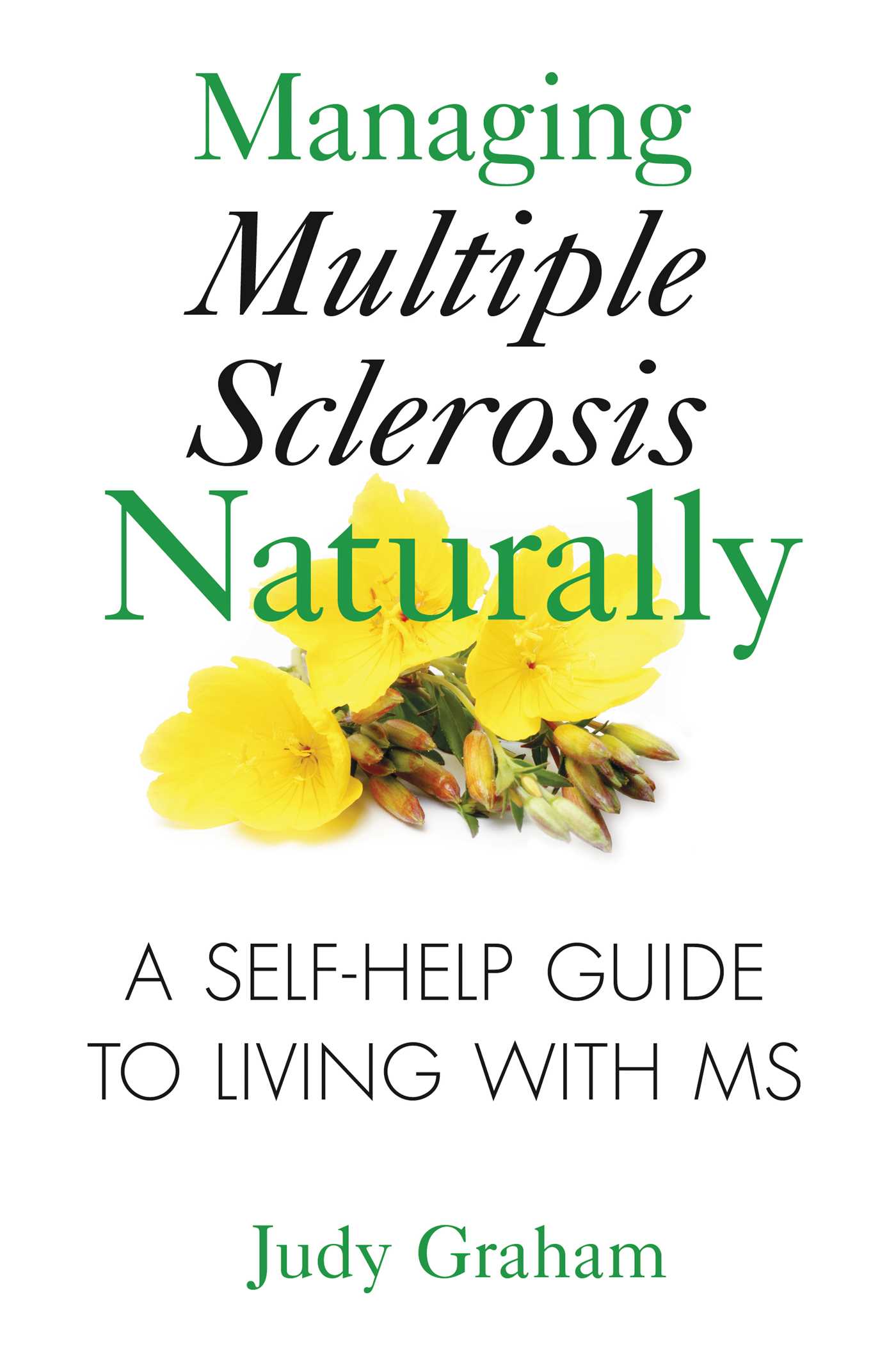 A Self-help Guide to Living with MS

• Provides guidance on special diets and nutritional supplements, exercise, alternative therapies, and the effects of negative and positive thoughts on MS

• Explains how to reduce toxic overload from mercury and chemicals

Judy Graham is an inspiration. Diagnosed with multiple sclerosis when she was just 26 years old, 35 years later Judy Graham is still walking, working, and has successfully birthed and raised a son who is now an adult. In this totally revised and updated edition of her groundbreaking Multiple Sclerosis, first published in 1984, she shares the natural treatments that have helped her and many others with MS stabilize or even reverse the condition.

Beginning with the effects of diet, she explains that many people with MS have been eating the wrong foods and shows which foods are “good” and “bad,” how to recognize food sensitivities, and how to correct nutritional deficiencies using dietary supplements. She also looks at reducing the body’s toxic overload, whether from mercury amalgam fillings, chemicals, or medications. She presents the exercises with proven benefits for MS she has found most reliable and appropriate, such as yoga, pilates, and t’ai chi, and explores alternative therapies that provide relief and support to the body’s efforts to control MS, including acupuncture, reflexology, shiatsu, reiki, and ayurveda. Most important are the insights she provides on the effects of negative thoughts on MS. She demonstrates how a positive mental attitude can actually slow down or even reverse the progression of this disease. Judy Graham is living proof that, as devastating as a diagnosis of MS is, life can still be lived to its fullest.

Other Techniques That Can Help MS

There are many other things that can also help MS. The following is not an exhaustive list and does not include the mainstream disease- modifying drugs or other drugs used to treat MS such as Avonex, Copaxone, Tysabri, and Campath as they are not part of the scope of this book. However, this chapter does include information on some drug therapies, which are outside the mainstream, such as LDN (low dose naltrexone) and combined antibiotic protocol.

Aloe vera is an immune system tonic. It also soothes the digestive tract and helps heal a leaky gut. It contains the three glyconutrients glucose, mannose, and xylose and is an excellent dietary source of fructooligosaccharides, which attract beneficial bacteria to inhabit the gut. It also helps with constipation, increasing the frequency of bowel movements, and softening stools.

Aloe vera contains a wide range of vitamins, the most important being the antioxidants C, E, and beta-carotene. It is one of the few plants in the world to contain vitamin B12. It also contains the minerals magnesium, manganese, zinc, copper, chromium, calcium, sodium, potassium, and iron. Aloe vera provides twenty of the twenty-two amino acids the body requires and seven of the eight essential amino acids that cannot be manufactured by the body and must be taken in with food. In addition, it contains anti-inflammatory plant sterols as well as saponins, which exert a powerful antimicrobial effect against bacteria, viruses, fungi, and yeasts such as candida.

After taking aloe vera for about two months, I began to notice small benefits. Then, by altering the dosage by trial and error, I found I was experiencing significant improvements. I used to suffer numbing fatigue, malaise, and anxiety. Now, I find I am less stressed; I have loads more energy and a feeling of well-being. Continence has improved. So have the spasms and tremors in my hands and legs, which had been very bad. My hands have gotten a lot steadier, and I am able to do some drawing again.

Aloe vera tastes similar to sour grapefruit and is not to everyone’s taste. I don’t mix it with anything, but you can add fruit juice if you like, or buy it already mixed. The suggested dose is 60 to 100 mls a day. However, I take 150 mls a day as I have found that this amount suits me best. If I am particularly tired, I take a little more. You can’t overdose on aloe vera. It’s best taken on an empty stomach. You can take it twice a day if it’s too much in one sitting. I keep to the same routine every day as this is what works for me.

Turmeric, the traditional Asian spice that gives curry its yellow hue, can help MS. Turmeric contains curcumin, a polyphenolic compound isolated from the rhizome of the plant Curcuma longa, traditionally used in Asian medicine to treat pain and for wound healing. Studies suggest that curcumin may block the progression of MS. Dr. Chandramohan Natarajan, of Vanderbilt University, found that mice injected with curcumin showed little or no disease symptoms, while untreated animals went on to develop severe paralysis.

In their 30-day study, Dr. Natarajan’s team administered 50- and 100-microgram doses of curcumin three times a week to a group of mice bred to develop the animal model of MS, experimental autoimmune encephalomyelitis (EAE). They then monitored the mice for signs of MS-like neurological impairment. By day 15, those mice that had not received curcumin had a marked progression of EAE with complete paralysis of both hind limbs. In contrast, mice given the 50-microgram dose showed only minor symptoms, such as a temporarily stiff tail. Mice given the 100-microgram dose appeared completely unimpaired throughout the 30 days of study.

MS is very rare in India, where curries are eaten frequently. Exactly how curcumin might work to halt the progression of demyelination remains unclear, but the Nashville researchers believe it may interrupt the production of IL-12, which plays a key role in signaling immune cells to attack the myelin sheath.

Colloidal silver--silver particles suspended in a liquid, usually water--is a powerful, natural antibacterial, antifungal, antiviral, antiparasitic, and body normalizing substance. Different products have different quantities of silver held in suspension varying from less than 10 parts per million (ppm) to 100. In laboratory tests, at just 5 parts per million it can kill single-celled organisms such as bacteria, fungus, and viruses. It is odorless and nontoxic. For patients with MS, colloidal silver is particularly used to treat urinary tract infections.

Heat and especially humidity can drain the energy of anyone with MS. If you lower your core temperature by 1 degree, these symptoms subside. There are many practical solutions for cooling, including:

I have an ice-cold bath every night for 30 minutes, as recommended by my sports therapist. I started off with just cold water, then gradually added ice cubes over the next couple weeks. I now add 100 ice cubes. Having ice baths has been life-changing for me. I have seen great improvement in all my MS symptoms. I can walk three times as far as I used to, I can walk up stairs without holding on to anything, my balance is better, and I have better bladder control.

My sports therapist, Simon, describes the benefits of ice: “The principle of ice is to reduce all aspects of inflammation, such as swelling, heat, redness, and scar-tissue production. The theory behind ice-baths is to help break down the scar tissue (scleroses) on the nerves so the myelin sheath can regenerate.”
Judy Graham

Judy Graham is the editor of New Pathways, a magazine for people with MS, has worked as a TV producer for the BBC and other UK channels, and has written for many newspapers and magazines. She is the author of six books, including Managing Multiple Sclerosis Naturally and Multiple Sclerosis and Having a Baby, and lives in London.

“Judy Graham’s book should be essential reading for all with MS and for the families and friends of those suffering. It is up-beat without being facile, and it surveys the field simply and intelligently. The clear way in which Ms. Graham tackles the contentious issue of diet is extremely welcome.”

“There is no doubt that this book is by far the most comprehensive, objective, and scientifically sound overview of all the options a person with MS has to help keep the MS disease process well controlled.”

"Fear of what's to come is a normal response to being told you have a condition that you'll be living with the rest of your life. But the message of Managing Multiple Sclerosis Naturally is positive. "The good news is that MS can be controlled," says Graham. "Far from all doom and gloom, the future can be joyous and productive."

"Managing Multiple Sclerosis Naturally is a must have resource for those with Multiple Sclerosis. This is the book that should be given to people when they receive their diagnosis. In fact, anyone who thinks they might have MS should probably pick up a copy."

“. . . probes causes and psychological pitfalls of MS, with plenty of information about research studies and dozens of resources listed.”

“A comprehensive look at all aspects of MS management – physical, mental and emotional – and how they interact with each other. There is clear advice about the different ways to tackle these, if you so choose. All in all a positive, easy to read book. Highly recommended.”

A Self-help Guide to Living with MS