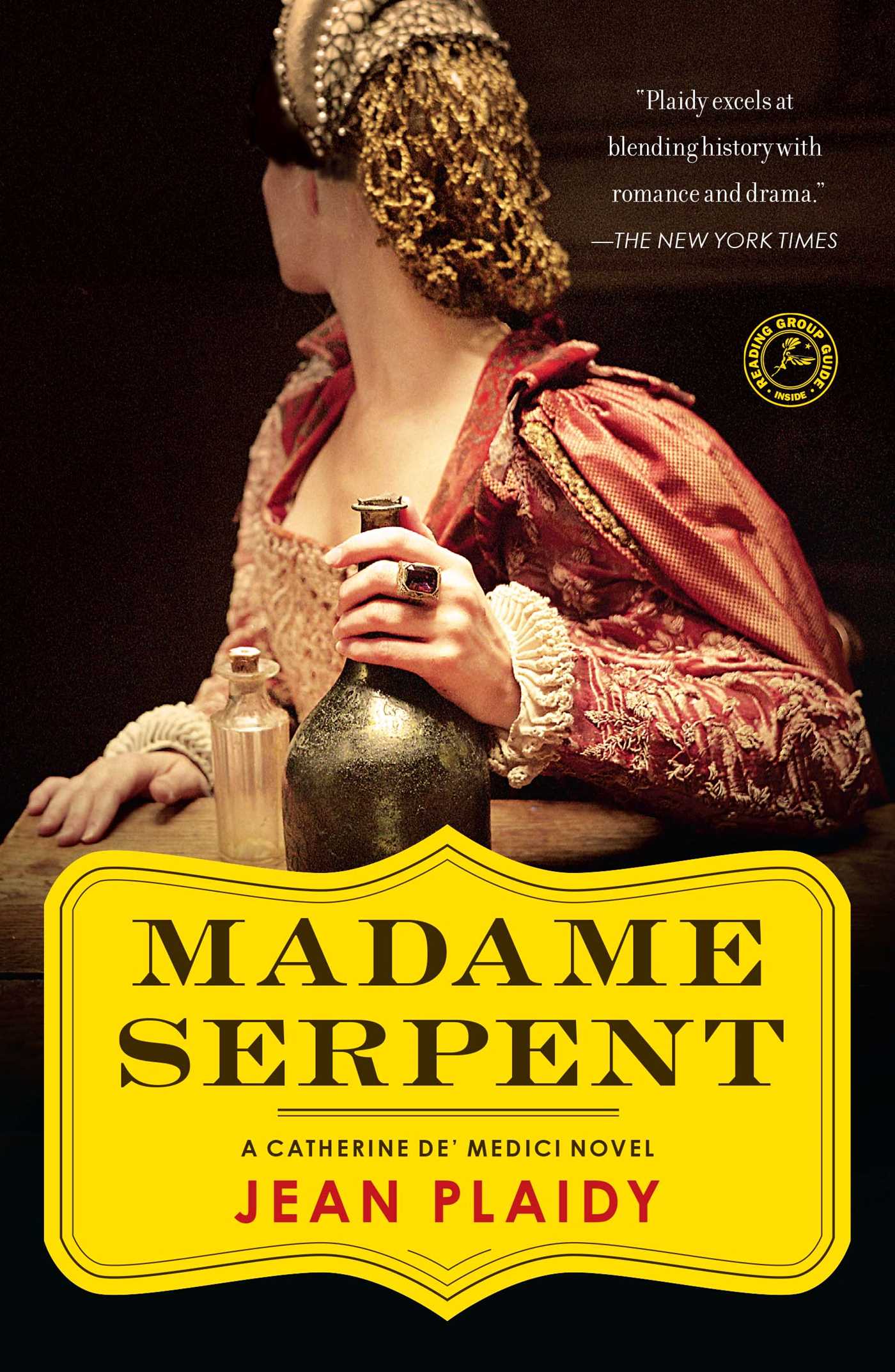 Fourteen-year-old Catherine de’ Medici arrives in Marseilles to marry Henry, Duke of Orleans, second son of the King of France. The brokenhearted Catherine has left her true love in Italy, forced into trading her future happiness for marriage into the French royal family.

Amid the glittering fêtes and banquets of the most immoral court in sixteenth-century Europe, the reluctant bride becomes a passionate but unwanted wife. Humiliated and unloved, Catherine spies on Henry and his lover, the infamous Diane de Poitiers. Tortured by what she sees, Catherine becomes consumed by a ruthless ambition destined to make her the most despised woman in France: the dream that one day the French crown will be worn by a Medici heir. . . .

This reading group guide for Madame Serpent includes an introduction, discussion questions and ideas for enhancing your book club. The suggested questions are intended to help your reading group find new and interesting angles and topics for your discussion. We hope that these ideas will enrich your conversation and increase your enjoyment of the book.

When fourteen-year-old Caterina de’ Medici arrives in Marseilles to marry the Henry, Duke of Orléans, second son of the King of France, she brings with her all the cleverness, cunning, and spirit that runs strong in the Medici blood. She also brings a broken heart.

Soon, however, a growing passion for her new husband and the promise of a Medici heir one day occupying the throne of France transforms Caterina—the reluctant bride—into Catherine, the youngest member of the glittering French court. But Henry has eyes for only the much older Diane de Poitiers. Fueled by jealousy, Catherine schemes to attain the affections of the man who is rightly hers . . . and no one can stand in her way.

1.As a child, what does Catherine learn from her Aunt Clarissa, from Pope Clement VII, and from the sisters of the convent of Santa Annunziate delle Murate? How do these lessons serve her at court as Dauphiness and later as Queen?

2.Do you think Catherine ever truly left her Medici roots behind? At what points in the novel is her loyalty to France tested? Do you believe Catherine’s devotion lies with France or with the Medicis?

3.Anne d’Etampes and Diane de Poitiers are very alike in their ambitions, their appearances, and their cleverness. What characteristics set the two women apart? How does Anne and Francis’s relationship differ from Diane and Henry’s? What are the effects of Anne and Diane’s enmity?

4.Jean Plaidy writes of Francis and Henry: “It was Francis’s nature to forget what was unpleasant; but Henry never forgot his friends . . . nor his enemies” (page 118). How does Francis’s and Henry’s conflicting natures affect their father-son dynamic? Why do they dislike each other? Might Francis and Henry have reconciled if it were not for Anne and Diane sowing ill will?

5.Francis often thinks of Henry VIII of England. What do his reflections about Henry reveal about himself and about what he fears and desires? What does Francis believe they have in common? How is he affected by Henry’s death?

6.Catherine believes that Henry’s affair with a Piedmontese woman is more of a disgrace for Diane than for herself, but Diane handles it so skillfully that she is admired. In what other instances does Diane thwart Catherine’s desire to see her humiliated? Does Catherine underestimate Diane?

7. Shortly before Francis’s death, Catherine suggests a snow fight to amuse him, one that ends in tragedy. What do you think this snow fight symbolizes for their relationship? How is Catherine’s role in the fight typical of her role in the court and its conflicts?

8. Catherine sums up the Catholic-Protestant conflict thus: “But what was the difference? One believed in pomp and ceremony; the other in austerity. Who should say which would best please God?” (page 290). Why is she untroubled by this conflict? Why are Henry, Diane, and Montmorency so violently opposed to the Protestants? Does the incident with the tailor change Henry’s feelings?

9. Why does Catherine see young Mary of Scotland as a threat? Do you think Mary is more like Catherine or Diane? Explain.

10. Could Catherine have eventually won Henry’s love? What do you think motivates her? Love, jealousy, humiliation, or something else? If Diane had died before Henry, do you think he would finally love Catherine? Do you think she would have been satisfied if he did?

11. Is Catherine de’ Medici reprehensible or resilient? Are her actions justified by her upbringing, her emotions, and the machinations of the court? Do you think “Madame Serpent” is an apt name for her?

13. What impression does the novel give of the French court, the Pope, and of monarchs in general? Are they effective rulers of their countries and countrymen? What are their primary concerns? Consider the military campaigns of Francis and Henry, the conflict between Catholics and Protestants, and the revolts against Pope Clement and the salt tax.

14. Anne d’Etampes, Diane de Poitiers, and even Catherine had great influence in the French court, but what was its source? When Francis and Henry died, Anne and Diane lost their power. How does the lot of these aristocratic French women compare with that of women in later centuries? With women today?

15. Discuss Jean Plaidy’s portrayal of romantic love. Which relationships are characterized by sincere love and which by a more artificial love? How does the pursuit of power interfere with or encourage the characters’ love and loyalty? How do the relationships of the couples of the French court compare with those of today’s powerful or political couples?

1. If your group longs to know what lies in store for Catherine, consider reading the second book in the Medici Trilogy, The Italian Woman.

2. Visit www.chenonceau.com to browse pictures of Chenonceau, the château that Catherine loved, and imagine the grandeur of the French court during Francis’s and Henry’s reigns. Do the pictures match the descriptions of Chenonceau in this novel? Does it look the way you imagined?

Jean Plaidy, the pen name of the prolific English author Eleanor Hibbert, was one of the preeminent authors of historical fiction for most of the twentieth century. Her novels have been translated into more than twenty languages and have sold more than 100 million copies worldwide. She died in 1993.

"Seldom has a character been brought to life with such clarity."

"Plaidy has crafted a compelling narrative, full of historical detail and fascinating characters. She is credited with resurrecting the historical novel as a genre, and Madame Serpent shows why."