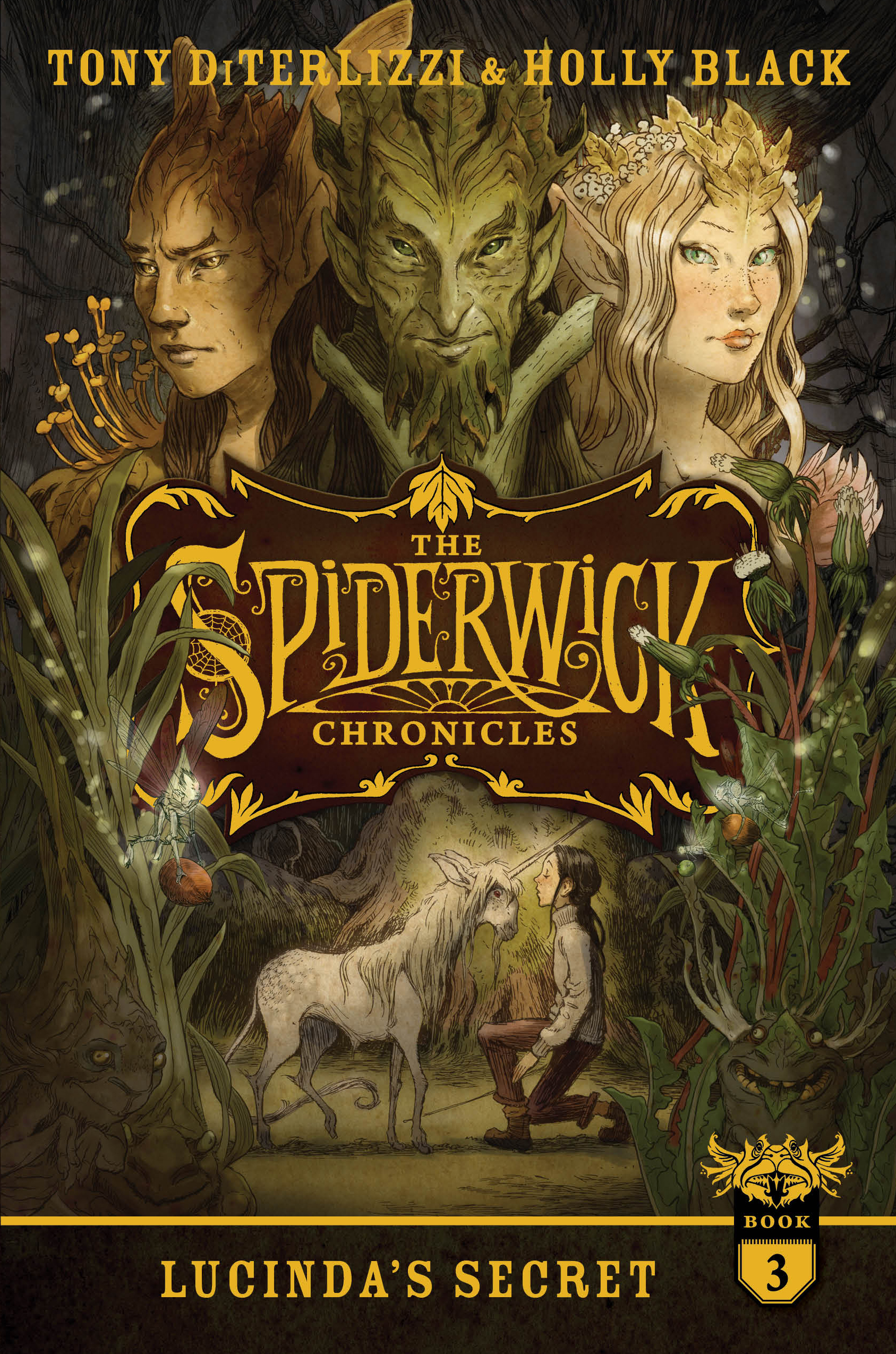 Let the story of my niece and nephews be a warning. The more you know, the more danger you're in. And trust me, you don't want to meddle with the Little People. -- S.S.
One thrilling adventure -- The Spiderwick Chronicles!
Their world is closer than you think.

Chapter One: IN WHICH Many Things Are Turned Inside Out

Jared Grace took out a red shirt, turned it inside out, and put it on backward. He tried to do the same with his jeans, but that was beyond him. Arthur Spiderwick's Field Guide to the Fantastical World Around You lay atop his pillow, open to a page on protective devices. Jared had consulted the book carefully, not sure any of it would help much.

Since the morning after the Grace kids had returned with the griffin, Thimbletack had been out to get Jared. Every so often he could hear the little brownie in the wall. At other times Jared thought he saw him out of the corner of his eye. Mostly, though, Jared just wound up the victim of some new prank. So far his eyelashes had been cut, his shoes had been filled with mud, and something had urinated on his pillow. Mom blamed Simon's new kitten for the last, but Jared knew better.

Mallory was completely unsympathetic. "Now you know how it feels," she kept saying. Only Simon seemed at all concerned. And he practically had to be. If Jared hadn't forced Thimbletack to give up the seeing stone, Simon might have been roasted over a spit in a goblin camp.

Jared tied the laces of his muddy shoe over an inside-out sock. He wished that he could find a way to apologize to Thimbletack. He'd tried to give back the stone, but the brownie hadn't wanted it. The thing was, he knew that if everything were to happen all over again, he would do exactly what he had done. Just thinking about Simon being held by goblins -- while Thimbletack stood around talking in riddles -- made Jared angry enough to almost break his laces with the force of the knot.

He stood up, tucking the Guide under his arm, and took a step toward the stairs. He fell immediately, hitting his hand and knee against the hardwood floor. Somehow Jared's shoelaces had been tied together.

Downstairs Mallory was standing in the kitchen, holding a glass up to the window so that the water caught the sunlight and cast a rainbow on the wall. Simon sat next to her. Both of Jared's siblings seemed transfixed.

"What?" Jared said. He was feeling grumpy and his knee hurt. If all they wanted was to show him how pretty the stupid glass looked, he was going to break something.

"Take a sip," Mallory said, handing the glass to him.

Jared eyed it suspiciously. Did they spit in it? Why would Mallory want him to drink water?

The microwave beeped and Simon jumped up to remove a giant mound of chopped meat. The top part was a sickly gray, but the rest of it still looked frozen.

"What's that?" Jared asked, peering at the meat.

"For Byron," Simon said, dumping it into a huge bowl and adding corn flakes. "He must be getting better. He's always hungry."

Jared grinned. Anyone else would be wary of a half-starved griffin recuperating in their carriage house. Not Simon.

Jared took a sip of the water and choked. The liquid burned his mouth and he spat half of it onto the tile floor. The rest slid down his throat like fire.

"Are you crazy?" he yelled between bouts of coughing. "What was that?"

"Water from the tap," Mallory said. "It all tastes that way."

"Then why did you make me drink it?" Jared demanded.

Mallory crossed her arms. "Why do you think all this stuff is happening?"

"What do you mean?" Jared asked.

"I mean that weird things started happening when we found that book, and they're not going to stop until we get rid of it."

"Weird stuff was happening before we found it!" Jared objected.

"It doesn't matter," Mallory said. "Those goblins wanted the Guide. I think we should give it to them."

The room was silent for a few seconds. Finally Jared managed a hushed, "What?"

"We should get rid of that stupid book," Mallory repeated, "before someone gets hurt -- or worse."

"We don't even know what's wrong with the water." Jared glared at the sink, anger coiling in his gut.

"Who cares?" Mallory said. "Remember what Thimbletack told us? Arthur's field guide is too dangerous!"

Jared didn't want to think about Thimbletack. "We need the Guide," he said. "We wouldn't have even known there was a brownie in the house without it. We wouldn't have known about the troll or the goblins or anything."

"And they wouldn't know about us," Mallory said.

"Stop being so selfish!" Mallory shouted.

Jared clenched his teeth. How dare she call him selfish? She was just too chicken to keep it. "I decide what happens to it, and that's final!"

Mallory took a deep breath. Jared could almost imagine steam coming out of her nose. "Exactly. We could all be dead because of that book."

The three of them looked down at "that book" dangling from Jared's left hand. He turned to Simon, furious. "I suppose you agree with her."

Simon shrugged uncomfortably. "The Guide did help us figure out about Thimbletack and about the stone that lets you see into Faerie."

"But," Simon went on and Jared's face fell, "what if there are more goblins out there? I don't know if we could stop them. What if they got in the house? Or grabbed Mom?"

Jared shook his head. If Mallory and Simon destroyed the Guide, then everything they'd done would have been for nothing! "What if we give back the Guide and they keep coming after us?"

"Why would they do that?" Mallory demanded.

"I'd make sure you didn't," said Mallory.

Jared turned to Simon, who was pushing a wooden spoon through the half-frozen mess of meat and cereal. "And what about the griffin? The goblins wanted Byron, didn't they? Are we going to give him back too?"

"No," said Simon, looking out of the faded curtains into the yard. "We can't let Byron go. He isn't all the way better."

"No one is looking for Byron," Mallory said. "It isn't the same thing at all."

"There is someone we could ask -- someone who really might know what to do," Jared said.

"Who?" asked Simon and Mallory in unison.

Jared had won. The book was safe -- at least for now.

Tony DiTerlizzi is a #1 New York Times bestselling author and illustrator who has been creating books for twenty years. From fanciful picture books, such as Jimmy Zangwow’s Out-of-This-World Moon-Pie Adventure and The Spider and the Fly (a Caldecott Honor Book), to fantastic middle grade novels like Kenny & the Dragon and the WondLa trilogy, Tony imbues each story with his rich imagination. He created The Spiderwick Chronicles with Holly Black, which has sold millions of copies around the world. You can learn more about Tony at DiTerlizzi.com.

Tony DiTerlizzi is a #1 New York Times bestselling author and illustrator who has been creating books for twenty years. From fanciful picture books, such as Jimmy Zangwow’s Out-of-This-World Moon-Pie Adventure and The Spider and the Fly (a Caldecott Honor Book), to fantastic middle grade novels like Kenny & the Dragon and the WondLa trilogy, Tony imbues each story with his rich imagination. He created The Spiderwick Chronicles with Holly Black, which has sold millions of copies around the world. You can learn more about Tony at DiTerlizzi.com.