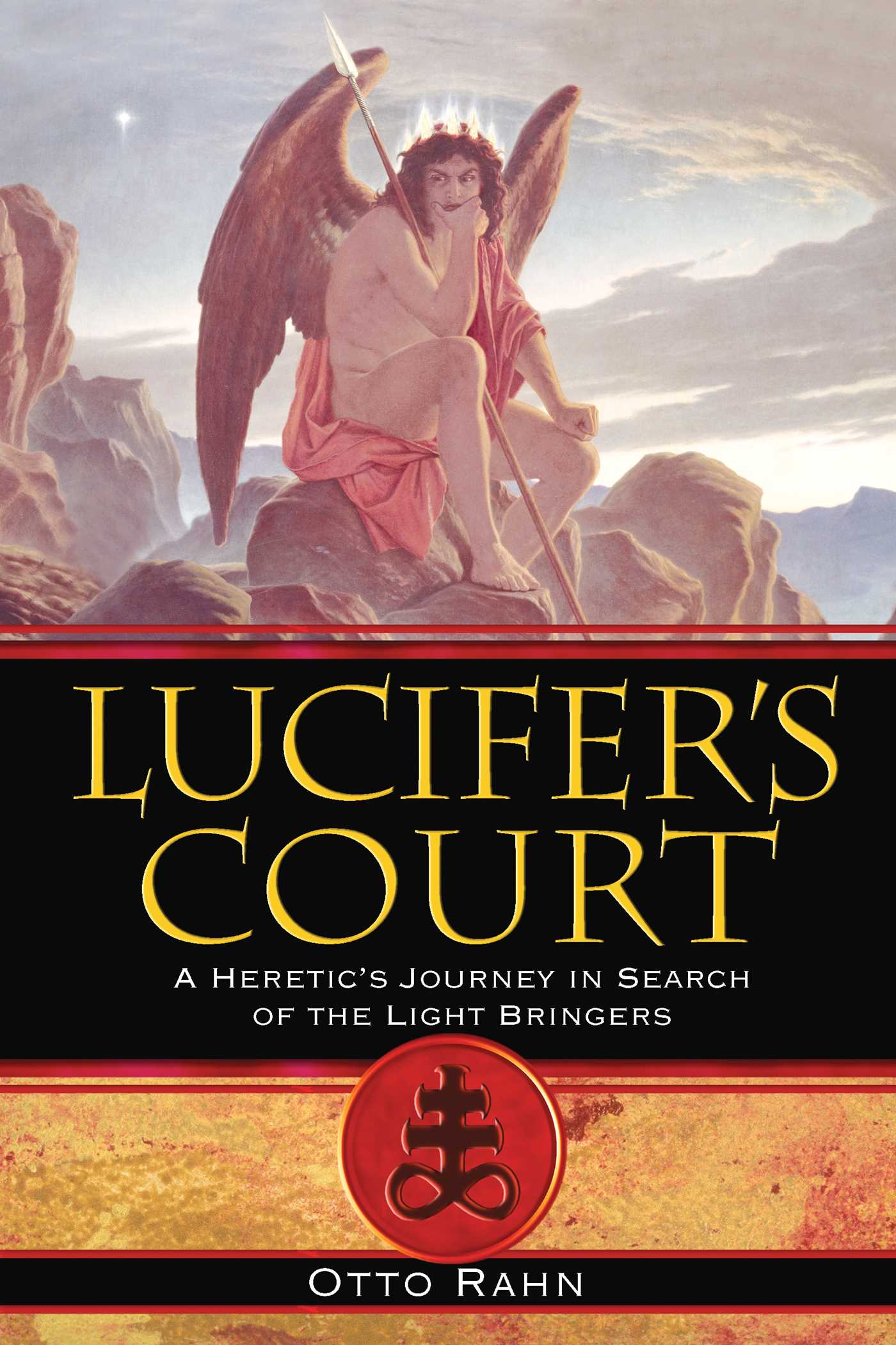 • First English translation of the author’s journeys in search of a Nordic equivalent to Mt. Sinai

• Explains why Lucifer the Light Bringer, god of the heretics, is a positive figure

Otto Rahn’s lifelong search for the Grail brought him to the attention of the SS leader Himmler, who shared his esoteric interests. Induced by Himmler to become the chief investigator of the occult for the Nazis, Rahn traveled throughout Europe--from Spain to Iceland--in the mid 1930s pursuing leads to the Grail and other mysteries. Lucifer’s Court is the travel diary he kept while searching for “the ghosts of the pagans and heretics who were [his] ancestors.” It was during this time that Rahn grasped the positive role Lucifer plays in these forbidden religions as the bearer of true illumination, similar to Apollo and other sun gods in pagan worship.

This journey was also one of self-discovery for Rahn. He found such a faithful echo of his own innermost beliefs in the lives of the heretics of the past that he eventually called himself a Cathar and nurtured ambitions of restoring that faith, which had been cruelly destroyed in the fires of the Inquisition. His journeys on assignment for the Reich--including researching an alleged entrance to Hollow Earth in Iceland and searching for the true mission of Lucifer in the caves of southern France that served as refuge for the Cathars during the Inquisition--also led to his disenchantment with his employers and his mysterious death in the mountains after his break with the Nazis.

From the Prologue and Part Three

Who loves his homeland, must understand it;
Who wants to understand it, must search earnestly in its history.
Jakob Grimm

Lucifer’s Court is based on travel diaries begun in Germany, continued in southern Europe, and completed in Iceland. Like an artist working on a mosaic who piles up small stones of a particular color to arrange them later in a preconceived plan, I collected ideas and knowledge under foreign skies and in lands far from home. The sum total has produced this pageant.
Either through revisions, adding details, or underscoring--not to mention rearranging--I have prepared those chosen pages from my diary in such a way that others may scrutinize, understand, and love them. My hand shall be a lucky one!
I wrote these lines in a small town in Upper Hesse. As I looked out from my desk, spreading out before me was a countryside that is very precious--so much so that as my curiosity pushed me through difficult places in foreign lands, I was often homesick. My father is from a town that sits on a densely wooded peak that closes off the district to the south and where, as far back as anyone can recall, men and their womenfolk have cultivated the land, stood before the anvil, milled grain to flour, and sat in front of the spinning wheel in low-ceilinged rooms. Their homeland is stony, and the sky is often filled with clouds. Only a few of them became wealthy.
My mother’s family hailed from the Odenwald, where they had it much easier. The sun and the climate are milder there, and the earth means well for those who love it.
The ruined walls of a castle dominate the Upper Hessian town where I now live, and where I wrote this book. Not far from the castle door (the castle that still stands) is a very old linden tree where St. Boniface first preached Roman Christianity to the Chatten. When I stood under it and looked north, my eyes fell upon an amazing basalt mass. There on its summit, the “Apostle of the Germans” constructed a cloister-fortress: the Amöneburg. My ancestors did not love St. Boniface, who preached the gospel of love. In a letter he sent to the pope in 742 CE, he described these ancestors as “idiotic.”
A few hours separate my hometown from Marburg-am-Lahn. A son of this town, the “fright of Germany,” also preached for Rome. The magister and inquisitor Konrad von Marburg crisscrossed his homeland on the back of a donkey, collecting Rosenwunder* for the beatification of his enlightened confessor, Countess Elizabeth of Thuringia--and collecting heretics for execution. He had them burned at a place in his hometown that is still called Ketzerbach, or “heretic ditch.” My ancestors were pagans, and my forebears were heretics.

*[Rahn is referring to St. Elizabeth of Hungary (who was Landgravine Elizabeth of Thuringia). She was known for the miraculous transformation of bread into roses. In German, Rosenwunder are also sea roses, rosa rugosa. --Trans.]

It is Christmas. Before visiting my friends who invited me to Christmas Eve, I decided to wander through the town. Through the windows of the old town I saw some beautifully decorated Christmas trees glowing in candlelight. I could hear the happy laughter of children and feel the passion of the fathers and mothers. Both sadness and happiness overwhelmed me. The bells began to announce the celebration, the ancient festival of light of the middle of winter. The sun god Helios-Apollo, Mithra, and even Chronos, the father of Zeus, were all born on this day, and time again they are born of a virgin mother. At midnight in the church of this old town, the choir will resound: “Today is born the lord, who is Christ the Lord, in the City of David!”
Lucifer could easily complain that mankind has turned its back on him, for long ago, his birthday was celebrated on this date. The Light Bringer suffered and nobody remembers him--except I! Some twelve paces beyond the entrance to the town’s cathedral, I will touch a stone that fell from the heavens. According to legend, the devil was so upset over the construction that with this stone he bombed the half-finished church in order to destroy it. He just missed, goes the story. The stone is called teufelstein.* Oddly, the devil threw it from the heavens!
How contradictory are Christians! In Cologne, they had burned at the stake heretics who should ascend to hell, while Isaiah placed hell at the bottom of all. And here in Halberstadt, the devil supposedly threw a stone from the heavens when, as we all know, he is the lord of the depths of hell.
When I stand before the mild irradiance of the teufelstein, which found its way, undisturbed, through the stars in their divine firmament, I am forced to think of the Grâl, the stone that fell from Lucifer’s crown and was won by Parzival. Further, I cannot forget the Grâl messenger Lohengrin, whom some called the Light Bringer Helias, which means Helios. In the depositions of the Inquisition, I read that the Cathars were awaiting an apparition, and according to the fifteenth-century Halberstädter Sachsenchronik, “the chroniclers believe that this youth, Helias the swan knight, came from the mountain where Lady Venus resided with the Grâl.” When I visit the devil’s stone, I will also think of Apollo, that light bringer who is born to a virgin every winter solstice in the land of the Hyperboreans and is carried to mortal men by swans in order to bring the law to mankind. Names are more smoke and thunder when they belong to divinities. After all, it is Christmas.

Otto Rahn was born in Michelstadt, Germany, in 1904. After earning his degree in philology in 1924, he traveled extensively to the caves and castles of southern France, researching his belief that the Cathars were the last custodians of the Holy Grail. Induced by Himmler to become a member of the SS as a civilian archaeologist and historian, Rahn quickly grew disillusioned with the direction his country was taking and resigned in 1939. He died, an alleged suicide, on March 13, 1939, in the snows of the Tyrolean Mountains.

" . . . a definite 'must read' for any serious student of lost wisdom, and certainly for any student of the Cathar tradition. It is well written, personal, and utterly riveting."

"New Age collections will find it intriguing and packed with adventure."