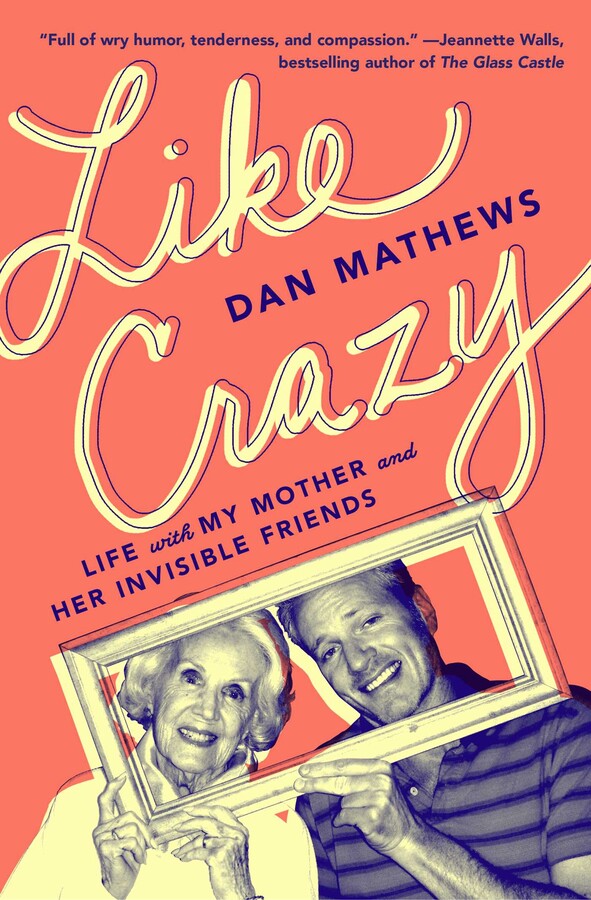 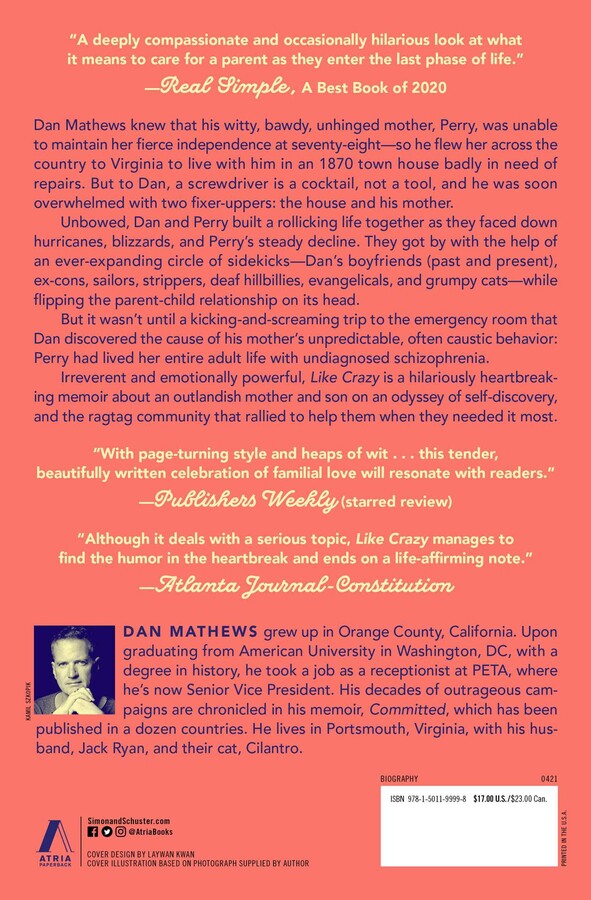 Life with My Mother and Her Invisible Friends

By Dan Mathews
LIST PRICE $17.00
PRICE MAY VARY BY RETAILER

A hilarious and heartbreaking memoir about a mother and son’s outlandish odyssey of self-discovery, and the rag-tag community that rallied to help them when they needed it most.

Dan Mathews knew that his witty, bawdy seventy-eight year-old mother, Perry, was unable to maintain her fierce independence—so he flew her across the country to Virginia to live with him in an 1870 townhouse badly in need of repairs. But to Dan, a screwdriver is a cocktail not a tool, and he was soon overwhelmed with two fixer-uppers: the house and his mother.

Unbowed, Dan and Perry built a rollicking life together fueled by costume parties, road trips, and an unshakeable sense of humor as they faced down hurricanes, blizzards, and Perry’s steady decline. They got by with the help of an ever-expanding circle of sidekicks—Dan’s boyfriends (past and present), ex-cons, sailors, strippers, deaf hillbillies, evangelicals, and grumpy cats—while flipping the parent-child relationship on its head.

But it wasn’t until a kicking-and-screaming trip to the emergency room that Dan discovered the cause of his mother’s unpredictable, often caustic behavior: undiagnosed schizophrenia.

Then I want to move in with them.”

Dusk fell quickly as I braced for my mother’s chaotic December arrival in Virginia.

The neon glow of the deco movie palace on High Street beckoned clutches of merry-makers wrapped in scarves. Where High Street runs into the river, crowds formed a single-file line for Portsmouth’s paddlewheel ferry to Norfolk, a service that has chugged along since 1636. Passengers hurried aboard to cross the harbor before seven. That’s when the holiday lights atop Norfolk’s mini-skyscrapers were switched on, signaling the start of the Grand Illumination Parade. Marching bands played brassy holiday tunes, as plump majorettes in white knee-high boots twirled batons and strutted to the beat. Their panting breath sent bursts of mist into the first chilly air of the season.

Usually I am on the curb cheering them on. That year I was at home, overwhelmed in Olde Towne, cheering on a wiry, white-haired, self-proclaimed Jesus freak. His name was Steve Self and his business card read Self Service. I hired him to help fix up the rickety old house I had just bought for my rickety old mother and me. Mr. Self wore faded blue jeans and a utility belt. He wielded power tools for the heavy jobs, while I handled decorations. Such as a flag featuring a gingerbread man with a chunk missing from his leg and the message “Bite Me,” which I hoisted over the porch.

For motivation, I blasted my usual Christmas playlist: a disco version of “Silver Bells,” Charo’s “Mamacita Dónde Está Santa Claus?” and a blues ballad called “Daddy’s Drinkin’ Up Our Christmas”—a tune that hit too close to home for my evangelical handyman. Mr. Self looked up from the pink shag carpet he was laying in the downstairs bedroom intended for Mumsie and let out a groan. Having given up liquor after some hard-partying years, he became born again as a means of leaving the past behind and starting anew. Whatever it takes.

In a clumsy attempt to correct the musical faux pas, I skipped ahead to the next track. It was an obscure country rant called “Here Comes Fatty with His Sack of Shit.”

“That’s a little better.” Mr. Self laughed in his raspy southern drawl. “But don’t you have any spirituals?”

“Sure do!” Lawrence Welk’s accordion interpretation of “Do You Hear What I Hear?” was in there somewhere.

Mr. Self was a godsend. He was the contractor hired by the realtor to replace shattered windows and broken pipes when I made the rash decision to buy the dilapidated Victorian. I asked him to stay on to sand the splintered hardwood floors, install a senior-friendly sit-down shower for Mommie Dearest, and jack up my bathroom sink upstairs so I wouldn’t throw out my back when I bent my six-foot-five frame in to shave.

Mr. Self helped me paint each room a different color from the Crayola Crayons Paint Collection: Tickle Me Pink, Shamrock, Neon Carrot, Radical Red, Banana Mania, and B’dazzled Blue. My house looks like a rainbow burst through a window and hemorrhaged all over the place. Once the chemical fumes from the paint had faded, Mr. Self drilled holes in the walls and installed thrift shop sconces, on which I placed candles, vintage photos of oddball strangers, and souvenir shot glasses.

Out of respect for his religious beliefs, I hid my framed Exorcist poster of a possessed Linda Blair in the closet until he was finished. I could not resist, however, screwing on my light-socket plate of a cartoon hunk, his blue bathrobe flung open so that the switch dangles between his legs. As electrical accessories go, it’s a turn-on. My pious carpenter chuckled and shook his head when he saw it. Mr. Self was devout but not disparaging. When he invoked a Bible passage, it sounded more like he was trying to recall his Social Security number than espouse morals. As an atheist in southern Virginia, I’ve learned to sidestep religion and politics and find common ground with any interesting individual I encounter. While I do not believe in gods above and devils below, I do honor the instinct inside that tells you the right thing to do. That’s why I decided to buy a house and move in my ill, unhinged mother.

Her name, which she changed many times over the decades, was now Perry. I addressed her as Mom—or in heated conversations “Mother!” My friends called her Perry so I often did, too. Sometimes she referred to herself as Paris, pronounced in the French way: Paree! Whatever the name, my friends were uniformly shocked when I announced that I would be taking her in. They listed the many ways my life would be derailed:

“You’re not much of a family man.” “You love living alone.” “You barely have the patience to stay overnight with your mother once a year; how would you tolerate being around her all the time?”

I travel a lot with work, so hopefully I won’t feel too trapped.

“You work for PETA and pinch your nose at the stench of meat.”

“What about having boyfriends over and impromptu late-night parties.”

She would love that. She always wanted to be a fag hag but never had the social skills. Plus she’s nearly deaf. I could play music at any hour.

“You’ve never owned a house, only rented bachelor pads—how will you maintain a home and a full-time job while looking after a sick old woman?”

Ouch. This one was tough to answer. I was such a gadabout that I had deemed myself unqualified to care for a low-maintenance plant, much less a high-maintenance parent. Was I as nuts as my mom?

Taking in Perry was not a decision to make lightly. Long troubled by the way Americans discard seniors like cigarette butts, I read up on how other countries dealt with the aged in hopes of inspiration. In Tamil Nadu, elders are gently bathed in fragrant yet lethal oils that cause kidney failure; alas, Mom was too hobbled to climb into a tub. In ancient Japan, old people were brought high into the hills and abandoned; Virginia has so many damned hiking trails that she would be found before I made it to the after-party. Inuits set their withering parents adrift on ice floes, another tradition ruined by global warming.

Enough with the fantasies. There was no shirking this responsibility. I felt duty-bound to look after my mother. I couldn’t stick her in some nearby apartment where I’d count the minutes during visits, nor in assisted living, where dead neighbors are whisked out the back door each week like expired brisket. We had to be under the same roof, enjoying life in our own house. Neither of us had ever owned one.

Could I become responsible enough to be the head of a household, learn what a mortgage was, and do home repairs? Mom and I were hopeless in a hardware store. To us a screwdriver wasn’t a tool but a cocktail. My only repair kit was a small blue plastic foldout case meant for single ladies called “Do It Herself,” with wrenches that looked like they belonged in Barbie’s Dream House. To make this mission a success, I would need guidance from anyone who offered it, starting with my saintly handyman.

As he showed me the difference between a Phillips and a flathead (I generally used a butter knife), Mr. Self said, “It’s a blessing you’re taking in your ailing mama, but it sure would be easier on you if you were married.”

I arched an eyebrow. “I’m not the marrying kind. Plus my kind isn’t allowed to marry. At least not yet in Virginia.”

“Well,” he said, looking away sheepishly, “God bless you anyways.”

“I appreciate that. And I am blessed with good friends. One of them is flying in with her from Los Angeles tomorrow.” 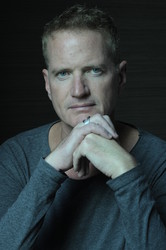 Dan Mathews was born and raised in Orange County, California, by a single mother who encouraged her three boys to bring home stray animals. In high school, he was beaten up for being gay and credits those rough times with helping him develop the thick skin needed to be an animal activist. He spent two years in Italy working as a fashion model and bit-part actor before returning to the US to earn a degree in history from American University in Washington, DC. Shortly afterwards, he began working at PETA as a receptionist and within a year was organizing protests. As PETA’s Director of Campaigns, he helps increase awareness of the rights of animals through high-profile events. He has been arrested for his activities more than twenty times but usually gets released from jail within a day. Through a unique combination of sex, humor, and glamour, he has turned animal rights into one of the hottest causes of the last two decades.

“Like Crazy is exquisite. Full of wry humor, tenderness, and compassion.” –Jeannette Walls, bestselling author of The Glass Castle

"As a psychologist who has worked with schizophrenia on a daily basis for the last 12 years, I found Dan Mathews' book nothing short of astonishing—just like his mother's life. He tells her story in a way that conveys the gravity of severe mental illness, but also captures the dizzying absurdity and even humor that came with caring for his mother and loving her. A poignant and beautiful book." —Richard Weiss, Supervising Psychologist, Los Angeles County

"A deeply compassionate and occasionally hilarious look at what it means to care for a parent as they enter the last phase of life." —Real Simple, Best Books of 2020

"Poignant, readable, and even fun despite the dark moments." —Kirkus

Life with My Mother and Her Invisible Friends

By Dan Mathews
LIST PRICE $17.00
PRICE MAY VARY BY RETAILER