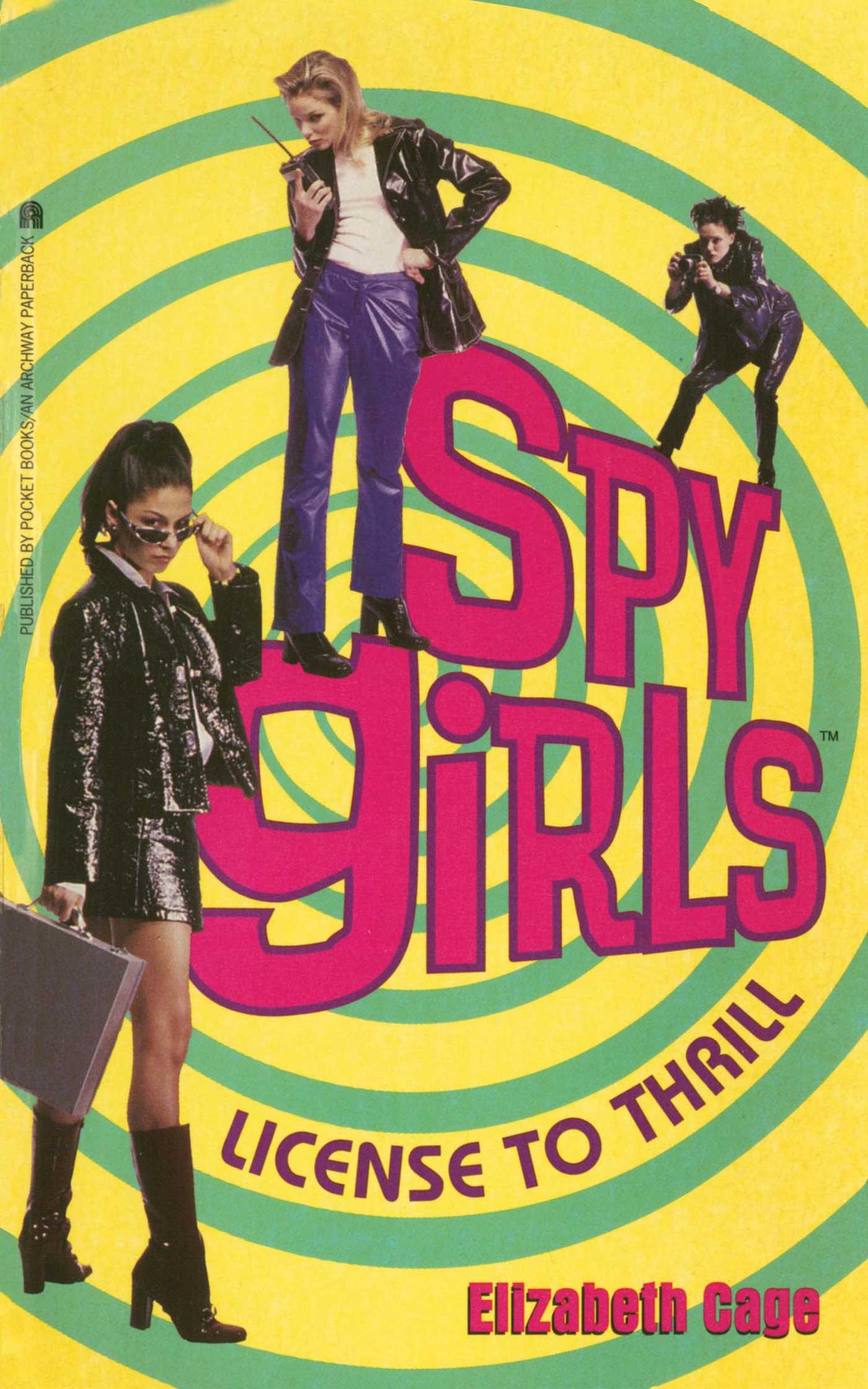 sassy sporty Jo flirty fun
bold brave Caylin worldly wild
clever classy Theresa sensitive smart
Three young women with nothing in common -- until they were handpicked to form the intensely cool trio known as the Spy Girls. Now they're jet-setting all over the criminal world in search of truth, justice, and a really choice hairstylist. No mission is ever impossible -- that's what Spy Girl power is all about!
Join the Spy Girls on their first mission as they wing on over to London to keep the superfoxy son of an American ambassador from blowing up the world!

Chapter One
"This is the life." Caylin Pike sighed as she leaned her blond head back against the plush Royal Airways seat. "There's nothing like sitting in first class to make a trip to England extra comfy."
"You're telling me," Jo Carreras exclaimed. "I mean, the service is out of control. I think I've already drunk my weight in diet Coke, and we've only been in the air for an hour." Her ebony eyes gleamed mischievously as she hit the reading light button. Its golden glow shone down on her face, highlighting her cheekbones and rich, flawless complexion.
"I never knew how lame flying coach was until now," Theresa Hearth added with a luxurious yawn as she extended her long, tan legs in front of her. "What's the ETA?"
"Um, I believe we have about five hours to go," Caylin replied with a roll of her baby blues. She'd made who-knew-how-many cross-Atlantic journeys in her seventeen years on the planet, and the reminder that she'd be rooted in her seat for that long made first class suddenly feel far from comfy. She squirmed restlessly, wondering how to inject some excitement into the long ride ahead. Other than jumping out the emergency door and surfing 747 style to the land of fish-and-chips, she couldn't imagine how.
Jo let out a long sigh from the center seat. "If only there were some U.K.-variety hotties on this plane -- then we could really make time fly. Where's Gavin Rossdale when you need him?"
Caylin laughed. "Jo, don't your babedar batteries ever wear out?"
"Nope!" Theresa broke in. "They keep going...and going...and going..." She craned her makeup-free face up over the seat back in front of her and scanned the first-class compartment. "Whoa, Jo, check out that cutie in two-B. I bet he's Gavin's long lost twin."
Caylin chuckled as she eyed the object of Theresa's joking affections -- a gray-haired guy a couple of rows ahead.
"Cut it out," Jo complained. "You shouldn't get my hopes up like that. I don't go for the geriatric set, thankyouverymuch."
"Oh, so you are selective," Caylin drawled. "I was beginning to wonder..." She trailed off as she realized that the gentleman in question had turned to stare at her, causing her face to make like a fire engine. "Okay, you guys, change of subject," she whispered hastily.
"Got one," Jo began. "What do you think our first mission is going to be?"
I wish I knew, Caylin thought, her heart pounding in anticipation of the adventure that lay ahead for her and her two new gal pals. Just four months ago Caylin, fresh out of high school in Maine, had been recruited by The Tower, a super-secret organization that was rumored to be a joint venture between the CIA and the FBI.
Hardly what I expected, Caylin noted silently as she recalled arriving in Washington, D.C., for what she had been led to believe was a post-high-school, see-the-world-while-you-help-it program like the Peace Corps. She had been all set to use her extensive mountaineering skills to teach underprivileged Tibetans how to become more self-sufficient or maybe employ her clout as a champion snowboarder to bring excitement to the sunlight-deprived lives of teenagers in Iceland.
Instead she was hit by an unexpected bombshell. Top secret government operatives had been watching Caylin since the seventh grade with the idea that she would someday make a perfect international spy for the U.S. government -- and right there by her side in D.C. had been Jo and Theresa, two complete strangers who had undergone the same scrutiny.
Once they had set foot through The Tower's doors, she, Jo, and Theresa had to put their "normal" teenage lives behind them forever. Now, with sixteen weeks of Bond-style training under their collective belts', the trio were on their first real mission. In the short time they'd known one another the newly christened Spy Girls had become best buds -- and, Caylin hoped, an awesome team.
We definitely work well together, Caylin thought. Her ability to put on a good act for authority figures -- honed over years spent sneaking out past curfew for late night street skating -- blended perfectly with Theresa's high-tech problem-solving prowess and Jo's expert knowledge of foreign languages. But Caylin couldn't help wondering if friendship and teamwork would be enough to sustain them through a mission they hadn't been told one iota about.
Let the fish-and-chips fall where they may, baby, she resolved, a smile of barely suppressed excitement playing on her lips. I'm ready to go wherever the wind carries me -- and I can't wait to get there!

"Here you go," the flight attendant said as she woke Jo from a long nap and handed her a videotape. "Special delivery."
"What is it?" Jo asked with a yawn. She couldn't recall ordering a video -- not even in her sleep. But the woman had already disappeared down the aisle.
As Jo began examining the tape Caylin stirred awake and squinted into the bright sunlight streaming through the window. Meanwhile Theresa napped on, lightly snoring.
Jo nudged Theresa with her elbow. "Wakey wake," she sang. "Looks like we have some viewing material here."
Caylin grabbed the tape out of Jo's hands and studied the label. "Three American Werewolves in London," she read with a laugh. "Obviously from The Tower."
Theresa snorted. "I'm offended!"
"Well, we can transform ourselves in the blink of an eye, " Caylin offered. "You know, with disguises."
"And I love wearing fur as long as it"s fake," Jo added. She took the vid back from Caylin and popped it into the combination TV-VCR embedded in the seat back before her.
"Hopefully we'll finally find out what we're supposed to be doing," Caylin said as she rushed to hit the play button. "Earphones, everyone."
A shot of a black limousine filled the screen and the rich voice of Uncle Sam, their boss, filled the silence. "Good morning, Spy Girls," he intoned. "You're almost there."
Jo impulsively hit pause. "Doesn't he sound too gorgeous?" she swooned. Ever since Jo had first heard Uncle Sam's voice, she'd been dying to meet him. But neither she nor her two partners had ever been allowed to see Uncle Sam's face -- it seemed to be the most heavily guarded secret The Tower held. Naturally the suspense made Jo's imagination run wickedly wild. "If he's even half as foxy as his voice is --"
"Stop drooling, Jo," Theresa admonished. "Youre going to get saliva all over the seats, and they'll boot us back to coach."
Without a word Caylin reached over and unpaused the tape.
Killjoys, Jo thought, rolling her eyes. They're always obliterating my buzz!
"Once you go through baggage claim and customs at Heathrow," Uncle Sam continued, "you'll be met by a chauffeur holding this sign."
The limo image was replaced with a shot of a cheesy-looking driver holding a handwritten sign reading Stevens. "That's it for now, ladies. Welcome to London...and good luck on your maiden mission."
As the screen faded to black, Jo removed her earphones and frowned in confusion. "Stevens?" she wondered aloud. "Who in the world is Stevens?"
Caylin pressed the fast-forward button, but there was nothing else on the tape. "That doesn't tell us anything!" she complained.
I can't take this suspense much longer," Theresa moaned. "Those folks at The Tower really know how to lead a girl on, don't they?"
"Seriously," Jo murmured, her mind returning to the day she'd discovered that The Tower was not what she thought. She had been totally psyched about having an opportunity to see the world and do good things for the underprivileged -- the kinds of things her father would have been proud to see her achieve. But that dream, like her father, had been killed in an instant.
Jo winced at the memory. She'd only been a high school freshman, sweet little Josefina Mercedes Carreras, the pride and joy of her father, who had defected from Cuba as a teenager and risen to prominence as one of Florida's most powerful judges. But then came that horrible day -- the day Jo knew would haunt her for the rest of her life. Judge Victor Carreras had driven her to school and was just about to kiss her good-bye when shots rang out. He was gunned-down by a vicious emissary from the drug cartel he had tried so hard to bring to justice.
An orphan at fourteen, Jo remembered, holding back tears. Her Brazilian-born mother had died during childbirth, so her father was the only family she had. Or so she'd thought until her aunt Thalia -- her mother's sister -- stepped into her life and brought Josefina to live in Miami with her and her husband, Enrique. Her newfound aunt and uncle took her on frequent trips to Brazil and introduced her to an extended family she never knew she had.
Still, the pain of losing her father was too great to bear. After she transferred to a new high school, she rejected good-little-girl Josefina and became fun-loving, boy-crazy Jo, connoisseur of fast food, faster fashion, and the fastest cars on earth. As hard as she tried to let go of her tragic past, it jumped up and bit her at the most inappropriate times -- such as when The Tower informed her she was about to become a top secret international spy. She definitely wanted to fight for truth, justice, and the American way -- her father had taught her well about that. Still, she couldn't help but fear that someday she would end up meeting the same senseless fate he had.
Suddenly the speaker above Jo's head crackled, breaking through her morose thoughts and shaking her back to reality. "We are beginning our final descent into London Heathrow," the captain announced. "Please fasten your seat belts..."
Caylin immediately began following his orders. "Whoo-hoo!" she cheered. "It"s about time!"
"I wonder what's in store for us when we touch down," Theresa mumbled, her gray eyes lost in thought.
"My feelings exactly," Jo said quietly as she gazed out the window at the clear blue sky. "One thing's for sure -- our lives will never be the same again."

Elizabeth Cage is the pseudonym of a noted young adult author. Her true identity and current whereabouts are classified.