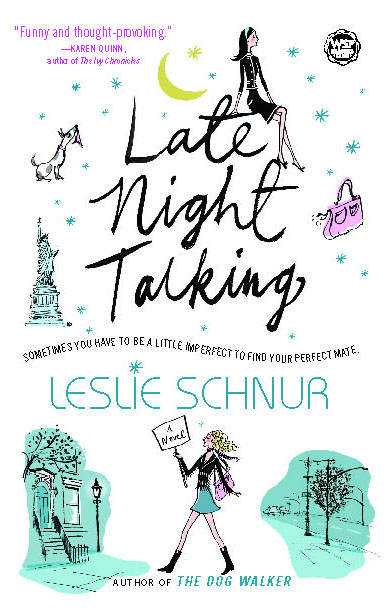 From the acclaimed author of The Dog Walker comes Late Night Talking, a tender and funny novel about bad behavior, the fragility of friendship and family, and how we cannot choose whom we love.

Jeannie Sterling, host of a late-night NYC talk show, vents with her listeners about everyday injustices, from rude cell phone users and poor gym etiquette to bad drivers and negligent pet owners -- the many aggravations of modern urban life. An idealistic California girl raised by two free-spirited parents, Jeannie believes in a life of value through activism. She's passionate about making a difference, about making the world a better place, one annoying person at a time.

For as long as she can remember, success in her career has been more than enough. But after all these years of being single, Jeannie realizes that some of the pieces of her perfect puzzle aren't fitting quite right. The people she thought she knew best all harbor secrets, secrets Jeannie isn't prepared for, secrets that can't be digested, processed, and solved in the neat three-hour window of her show. Her best friend, Luce, is growing distant and distracted; her wayward father unexpectedly moves in; and an ambiguous relationship with her college crush ignites.

When the radio station is bought by the maverick mogul Nicholas Moss, Jeannie's career, her one safe haven, also descends into chaos. She is pushed to increase ratings and goes too far, risking the loss of everything and everyone important to her.

Delightfully real and deliciously flawed, Jeannie Sterling is a character we can't help but root for as she faces her life's most hilarious -- and heartbreaking -- challenges.

From Leslie Schnur, the acclaimed author of The Dog Walker, comes a new novel about Jeannie Sterling, New York City late-night talk show host extraordinaire. Jeannie thinks the world could be a better place, if only people weren't so irritating!
Every night from 12:00 to 4:00 a.m., she and her listeners vent about the everyday injustices -- from rude cell phone users to poor commuter etiquette -- on her radio show, Sterling Behavior. A California girl raised by two free-spirited parents, Jeannie believes in a life of value through activism. But after all these years of being single, she's starting to notice that some of the pieces of her perfect puzzle aren't fitting quite right. An unexpected visit from her father and an ambiguous relationship with her college crush start to make her life feel out of control. And Jeannie doesn't like being out of control.
When the radio station is bought by the dangerously attractive New York mogul Nicholas Moss, it's almost as if Jeannie's career, her one safe haven, starts driving itself. And despite the fact that she's already called Moss a turkey and a pig, she can't stop herself from daydreaming...and fantasizing. Snappy and sensitive, Jeannie Sterling is a character we can't help but root for as she faces her life's biggest -- and most hilarious -- challenges.

QUESTIONS AND TOPICS FOR DISCUSSION
1. From cutting another driver off on the road to bad gym etiquette and leaving "doggie doodie" on the sidewalk, several examples of rude conduct are discussed on Sterling Behavior. Which example do you think is the most offensive? If you were to call into Jeannie's radio show, what poor manners and crimes against ethics would you report?
2. What do you think of Jeannie Sterling's crusade to eradicate rude behavior? Can you identify with her desire to be an "ethical avenger"? What does her profession say about her character?
3. Jeannie frequently points out the differences between herself and Luce throughout her narrative. In what ways are Jeannie and Luce similar? What do you think makes their relationship so strong?
4. Although Jeannie is the primary narrator, there are portions or passages within the novel when Tommy, Luce, and Moss narrate as well. Do you think that there is any significance to the parts of the story that the author chose to tell via the voices of these characters? What affect does switching the perspective have on the story as a whole?
5. Luce advises Jeannie, "Trust your instincts. Nobody is worth losing yourself over" (p. 167). Can you identify the moments when Jeannie's feelings for Tommy change? Can you identify the moments when she truly begins to fall for Moss?
6. As the novel progresses, we discover more and more about Jeannie's childhood. Does her nontraditional upbringing justify the way she treats her friends, Lindsey, and later, Luce? Why or why not?
7. Do you agree with Luce's statement "Just because love is unconditional, it isn't always enough" (p. 283)? How do you believe Jeannie may or may not have applied this assertion to her own life?
8. How significant do you think Jeannie's father, and even Mouse, his "gift" to Jeannie, are in terms of Jeannie's character development?
9. In what ways do Jeannie's feelings about love, friendship, and family evolve over the course of this novel? Do you believe that she is the character that undergoes the largest transformation? How, if at all, do the other main characters change?
10. If we were to define this novel as the story of one woman's quest to truly find herself, do you believe Jeannie accomplishes that by the end? What actions or events demonstrated that she may have lost herself at some point along the way?
11. Where do you see Jeannie and Moss in fifteen years? Do you think their relationship can be sustained? If there were a sequel to Late Night Talking, where do think we'd find the characters, and what would their story be?
12. Main themes in this novel include true love and the sacrifices people must make in order to find it, and discovering how and by what means people can make a societal impact. How far do you think people should be willing to go for love? What do you think is the best way to fight for a cause you believe in? What does the novel imply? Has it changed you views?

TIPS TO ENHANCE YOUR BOOK CLUB
1. Just as the tone of the show, Sterling Behavior, evolves from beginning to end, mirror this transformation with the following activity. Spend one day noting and recording rude or unethical practices. The following day, do the same practice, but instead record only good and kind behavior. Share your findings with the group!
2. Music, especially from the 60's and 70's, is highly influential to both Jeannie and Moss. Create a list of your top five favorite artists, and include your favorite songs and any lyrics that are particularly meaningful to you. Compare your list and discuss with other members of your book club, or make a soundtrack for the meeting.
3. Go to Leslie Schnur's website, www.leslieschnur.com, and explore. Read the "Leslie Rants" section. Recognize anything from the book? 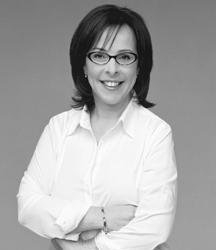 Leslie Schnur was previously the editor-in-chief of Delacorte
Press/Dell Publishing. Raised in the San Francisco Bay Area and a
graduate of the University of California at Berkeley, she currently
lives in New York City with her husband, two children, and two dogs.

"Entertaining...The main character is lovably flawed, and so is almost everyone orbiting in her up-and-down universe, which may remind us of a lot of people we know, including ourselves."

"Leslie Schnur entertained us in 2004 with her bestselling debut novel, The Dog Walker. She's back this summer with Late Night Talking...a charming novel."