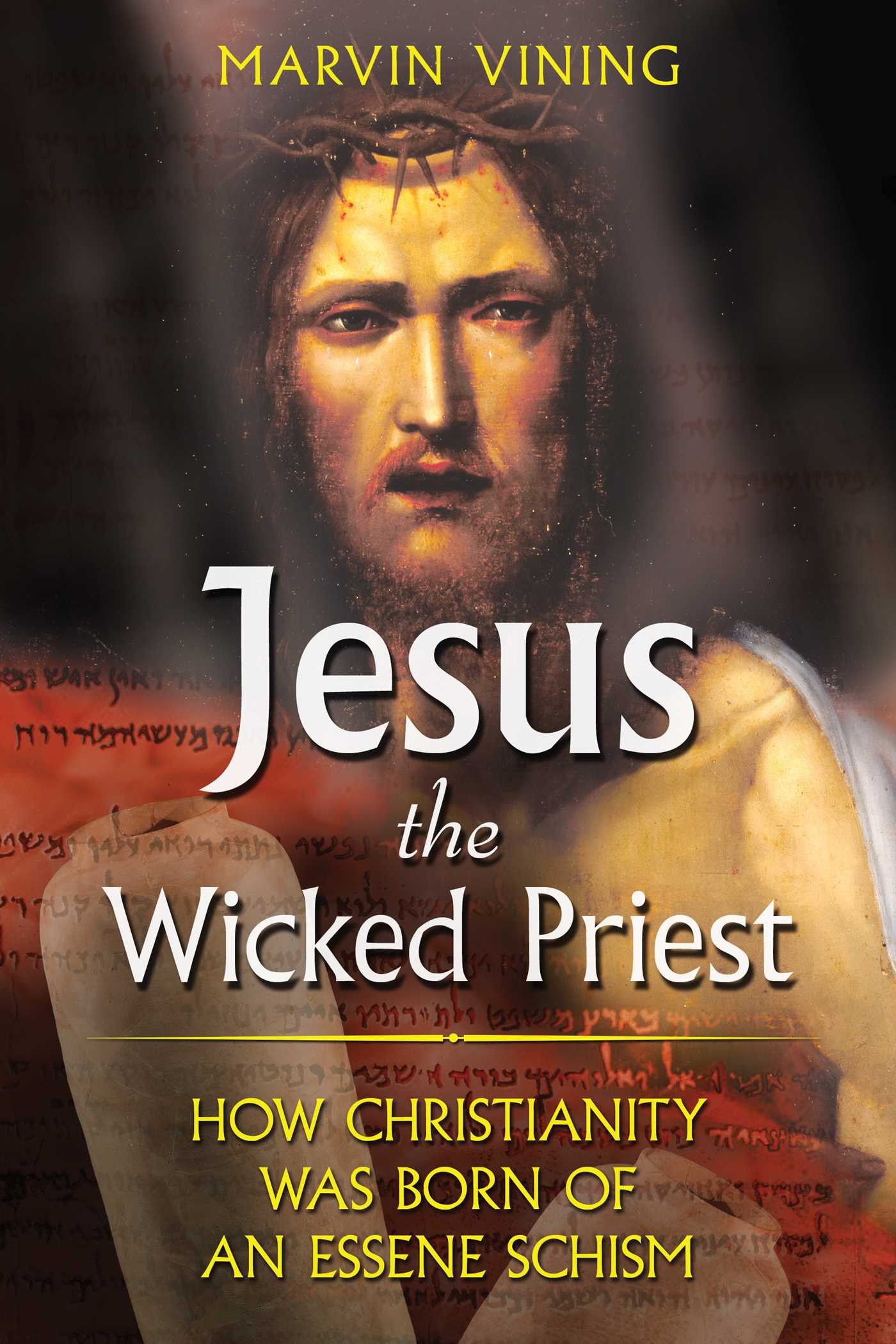 By Marvin Vining
LIST PRICE $7.99
PRICE MAY VARY BY RETAILER

• Reveals the Essenes as key figures behind Jesus’s trial, torture, and crucifixion

• Shows how Jesus, a former Essene himself, was deemed “the Wicked Priest” for his liberationist politics and humanist bent

The Dead Sea Scrolls, discovered in 1947 at Qumran, are generally believed to have been written by a Jewish sect known as the Essenes between 350 BCE and 70 CE--but until now no convincing methodology has linked the Scrolls to the actual life and teachings of Jesus. Marvin Vining builds from the controversial work of Barbara Thiering to demonstrate that the Scrolls do speak directly to the origins of Christianity and even reflect a mirror image of the Gospels from the perspective of Jesus’s enemies.

Christianity arose out of a schism between the exclusivist, rigid, and militant views of the Essenes and the inclusivist, tolerant, and nonviolent views of Jesus. Jesus was raised an Essene, but he refused to follow their orthodoxy. Vining shows that the Dead Sea Scrolls are written in a secret coded language called pesher in which Jesus emerges as the Wicked Priest, the antagonist to the Teacher of Righteousness who was the leader of the Essenes. Jesus the Wicked Priest revitalizes the Gospel message by revealing Jesus’s true role as a tireless social reformer and revolutionary teacher. Vining’s study reopens Christian doctrinal questions supposedly long settled, such as reincarnation and the Virgin birth--even demonstrating that these two issues are related. He discloses that the angel Gabriel was incarnate in a living human being and transmitted the seed of a holy bloodline to the Virgin Mary.

Identifying the Essenes in the New Testament


By now, most informed readers should be familiar with the scholarly consensus that a Jewish sect known as the Essenes wrote the famous Dead Sea Scrolls found in 1947 near a small Judean village known as Qumran. But who were the Essenes? We know that the Essenes existed from at least the second century BCE to the fall of Israel to the Romans in 74 CE, though in all likelihood they were around much earlier. In other words, we know the Essenes existed before and well through Gospel times. But why is it that the Essenes never once appear by name in the New Testament? Reason says we should find them there, right alongside the Pharisees, the Sadducees, and the Zealots.

It has been suggested that the New Testament is silent about the Essenes because the Essenes themselves were the early Christians. In 1863, long before the Scrolls were discovered, Ernest Renan published a biography called The Life of Jesus (La Vie de Jésus), one of the first scholarly attempts at recovering the historical Jesus of Nazareth. Renan, a controversial biblical scholar even in his time, made the claim that Christianity was a branch of Essenism that survived. While I, too, believe this to have been the case, Renan’s claim was somewhat premature and needs qualification. In this chapter, I will identify the Essenes in the New Testament, shedding new light on Jesus and the origins of Christianity.

Renan published his views before he could possibly have understood how complex the relationship was between the Essenes and the early Christians, a relationship that might have remained hidden forever except for the discovery of the Dead Sea Scrolls. A curious fact emerged once scholars began to translate and understand the Scrolls. The Essenes seemed to influence the early Christians more than any other Jewish sect, yet the Essenes were the very sect whose ideology the early Christians most despised. The late Yigael Yadin, an Israeli archeologist who published numerous books and articles on the Dead Sea Scrolls, called this finding a “historical paradox.” He knew the Scrolls presented us with a great many mysteries that would not easily be resolved.

[The Essenes] clung tenaciously to the most rigorous interpretation of the Law of Moses in general, and in particular to the ordinances on the Temple and its rituals, festivals and sacrifices alike. Yet it was this very sect, of all the Jewish sects, that had the most profound influence on the beliefs, practices, organization and even the phraseology of early Christianity. Christianity eventually strove to detach itself from the Law of Moses. How was it, then, that this most extreme and Orthodox Jewish sect had this impact on Jewish Christianity which was subsequently to fight against the legalist and rigid interpretation of the Law of Moses, and finally to reject that Law?

How can this paradox be resolved? It is resolvable only by recognizing the revelation, the life and teachings, of a former Essene known as Jesus of Nazareth. The formative years of Jesus, perhaps many of the mysterious missing years between the ages of twelve and thirty,* were undoubtedly spent with the Essenes. More than likely, the majority of Jesus’s Jewish followers were Essenes also. The point at which the Christian movement became the “Church” has produced a great deal of speculation through the years. I prefer to think that the Church was born the moment of Peter’s confession (Mt 16:13-20), the moment Jesus’s messianic secret was first fully realized among his disciples. If we take this as the point of departure, the relationship between the early Church and the Essenes was very complex indeed. Peter was a former disciple of John the Baptist, as was likely Andrew, Peter’s brother (Jn 1:35-42). If John the Baptist was an Essene, as I argue in chapter 5 (section 44-46), then it is possible that at least these two disciples, Peter and Andrew, were either Essenes or Essene proselytes. I think it likely that most of the disciples were Essenes. Yet there came a time when Jesus broke from the Essenes, when his theology was no longer theirs. What is so remarkable about the Dead Sea Scrolls, and so challenging to scholars--which explains why so few have been able to make sense of them--is that they give us a reverse perspective of the Gospel narratives. The Scrolls record in great detail much of Jesus’s life--important dates, references to persons, places, and events--but we see these details through the eyes of his enemies. It was the strong negative correlation to Gospel events that convinced me my restoration was accurate.

*These are called the “missing” years of Jesus because the Gospel accounts in the orthodox canon are completely silent about them.

Because the relationship between the Essenes and Jesus was so complex, it is best understood if we start from the beginning. From what I can gather, neither the Gospels nor the Scrolls mention anything directly of Jesus’s formative years. Yet we can reasonably conclude that Jesus was raised an Essene because, like any person, his thoughts and actions reflect his upbringing. The Gospels show that Jesus taught distinctively Essene doctrines, such as a strict prohibition of divorce (Mk 10:2-9; 11Q19 57.17). He was apparently not married and honored celibacy in service of God (Mt 19:12), a fact that is quite striking considering the Essenes were the only Jewish sect who practiced celibacy at the time (War 2.121). Both he and his followers used the same phraseology or concepts as the Essenes, like the term “Holy Spirit,” which appears nowhere in the Old Testament but was found abundantly in the Scrolls, or “sons of light,” “sons of darkness,” reflecting the Scrolls’ Zoroastrian influence (Lk 16:8; 1QS 3-4). He was a cousin of John the Baptist, whom many scholars have held to be an Essene, as was also James, Jesus’s half brother.
Marvin Vining

Marvin Vining, an attorney who is in the process of ordination in the United Methodist Church, spent 14 years researching and writing this book. He is a Biblical scholar who holds a master's degree in philosophy and has studied theology for many years. He lives in Mississippi, and his website is www.MarvinVining.com.

“Marvin Vining has produced a fascinating and engaging book with a provocative thesis--namely that the Dead Sea Scrolls refer directly to Jesus of Nazareth and that the Essene movement that they represent opposed him as the character they called ‘The Wicked Priest.’ This sort of connection between Jesus and the Dead Sea Scrolls, both in terms of chronology and history, has been dismissed by almost all scholars in the field. Vining skillfully puts the case back on the table. He deserves a careful reading by non-specialists and those in the academy alike.”

– James D. Tabor, Ph.D., chairman of the Department of Religious Studies, UNC Charlotte, and author of

“Vining’s work is remarkable Christian scholarship. I highly recommend this book to anyone interested in the Essenes, Jesus, and the early Christian Church.”

– Clayton Sullivan, Ph.D., author of Rescuing Jesus from the Christians

" . . . an attention-getting and provocative title. Appropriate, too, for the inevitably controversial ideas put forth in Vining's book. . . . The premise for this interesting interpretation comes from the Dead Sea Scrolls, which speak of the Teacher and the Wicked Priest."

– Curled Up with a Good Book

" . . . Vining stuck with standard resources and presented the theories in a well thought manner."

"[Vining] makes no excuses for his leaps of faith, but instead documents them as the insights they are. While this is hardly the first or last word on any of these topics, Vining's unique reconstruction is a valuable contribution to the field."

"While this is a book aimed at a Christian audience, it does offer some perspective on Pagan beliefs in the early Common Era. Whether or not you find it useful in your own understanding of Christian origins, it should encourage an open-minded approach to religion in general."

"Vining shows the reader why Jesus is the Wicked Priest for reacting against some of the strict ascetic and often self-defeating doctrines of the Essenes. . . . This is a controversial work. It does challenge many Christian doctrines. Vining has done detailed research and it is apparent in his writing that he is a man of great faith. . . . suitable for both the interested lay person as well as the biblical scholar."

By Marvin Vining
LIST PRICE $7.99
PRICE MAY VARY BY RETAILER