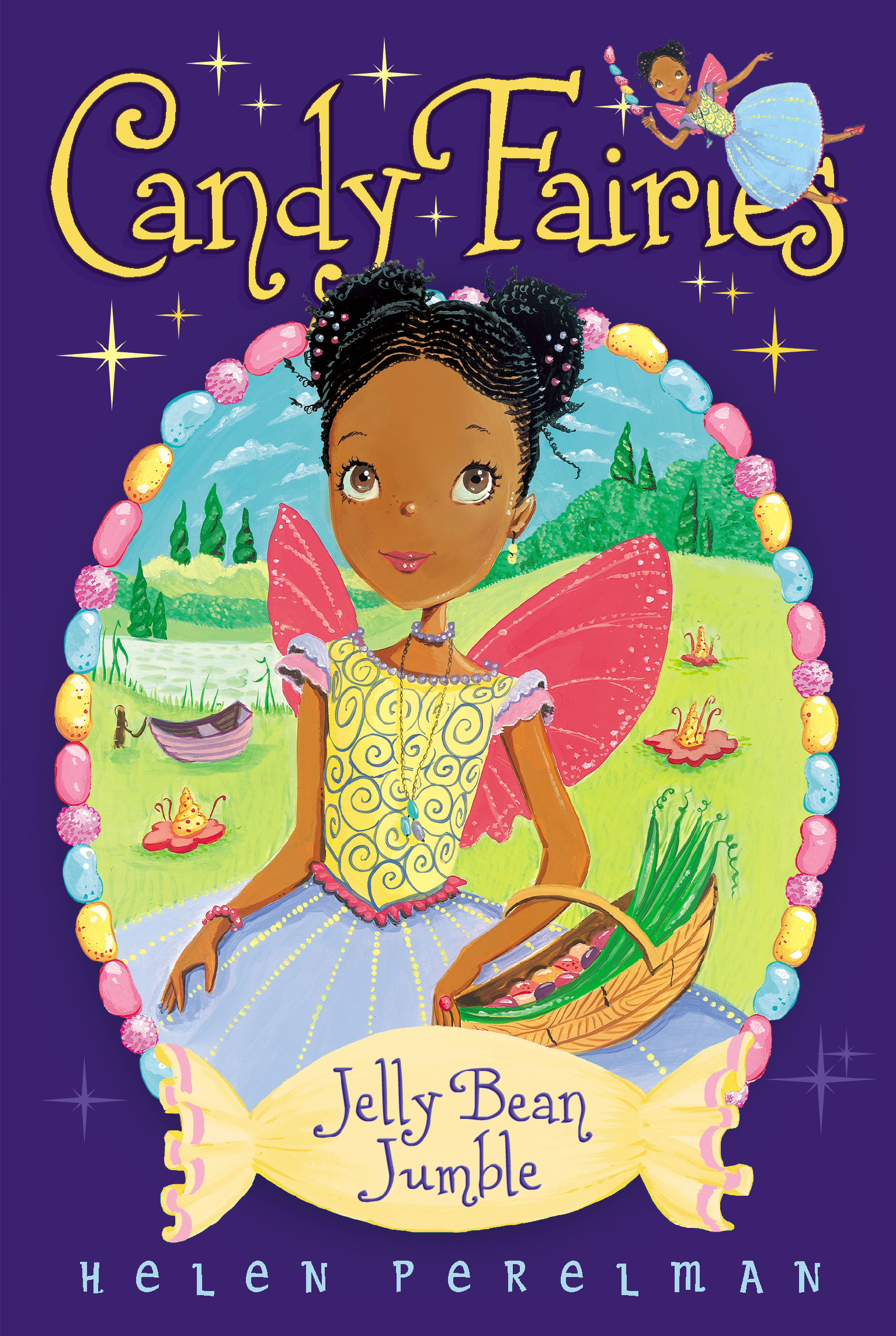 An unexpected winter storm has come to Sugar Valley, and the sweet spring crops—including Berry’s jelly bean plants—are on the brink of disaster! Berry feels she’s to blame: Did she plant her crops too early? Even the ever-helpful Fairy Code Book doesn’t have the answer this time. And since the storm has also taken its toll on other fairy homes and surrounding areas, Princess Lolli is worried she won’t be able to visit her sister, Princess Sprinkle. What will Berry and her fairy friends do to save the jelly beans, Princess Lolli’s trip, and the day?

The sun shone down on the Royal Gardens at Candy Castle. Berry the Fruit Fairy sat under a lollipop tree with her friend Raina, a Gummy Fairy. “It feels like everyone in Candy Kingdom is outside today,” Berry said.

“On a day like this, it’s hard to stay inside,” Raina replied. She tilted her face up toward the sun’s rays.

Berry smiled. It was the first warm day of spring, and all the fairies in Sugar Valley were buzzing around. After the chilly winter, the warm sunshine was a welcome feeling.

“Thanks for meeting me for lunch today,” Berry told her. “I’m sorry I missed Sun Dip last night.”

Sun Dip was a time when Candy Fairies gathered to talk about their day. During the last moments of daylight, Candy Fairies shared stories and sweet treats. Yesterday Berry had missed out on seeing her group of friends.

“Did you finish planting the jelly bean seedlings?” Raina asked.

Berry’s wings fluttered. “Yes,” she said. “I needed the extra time last night. The seedlings are getting so tall. I planted them all.”

“Princess Lolli is going to love the new crop of jelly beans,” Raina said, smiling. “Our basket is going to be sugar-tastic!”

Berry and her friends were making a special basket for Princess Lolli’s upcoming journey to see her sister, Princess Sprinkle. Princess Sprinkle lived on Cupcake Lake and ruled over Cake Kingdom to the north. Each sister brought the other the best of her kingdom’s crops to share when she visited.

On her last visit, Princess Sprinkle had brought beautiful cupcakes, cakes, cookies, and brownies. The Cake Fairies were known for their tasty treats. The Candy Fairies always had a feast during those visits. For Princess Lolli’s trip, Berry had wanted to give the fairies in Cake Kingdom a special sweet treat of her own.

“Cocoa and Melli showed us the basket last night,” Raina said. “They worked very hard and it is beautiful.”

“And did Dash find the nighttime mints?” Berry asked. “I know she was worried about getting the right size mint for Princess Lolli to see near the Forest of Lost Flavors.”

Raina shivered. “Oh, I don’t like thinking of that place,” she said. “All those white, flavorless trees . . . ” Her voice trailed off.

Berry had heard many stories about the creepy forest from Raina. The Gummy Fairy loved books and owned the largest collection in Sugar Valley. There was plenty written about the Forest of Lost Flavors. The wide forest divided the land between Candy Kingdom and Cake Kingdom. Most Candy Fairies stayed far away from the eerie forest. Nothing grew there anymore—no candy crops at all. Now there were just tall white trees without any flavor. That forest was not somewhere a fairy would want to be without any light, and it was scariest at night.

“I am sure Princess Lolli is going to love our basket,” Berry said. “It is an honor to make her one for her trip. I don’t remember the last time she went to see her sister.”

“Princess Sprinkle has come here for the last few visits,” Raina remarked. “Princess Lolli must be excited.” She looked over at Candy Castle. “I wonder if she gets nervous about traveling such a far distance. I would!”

Berry reached for her fruit nectar drink. “I saw Butterscotch yesterday. She was looking forward to the flight. If I could ride Butterscotch there, I wouldn’t be afraid.”

Butterscotch was a royal unicorn. She was a beautiful caramel color with a deep-pink mane. She often took Princess Lolli on long voyages.

“Maybe,” Raina said thoughtfully. “I’m not sure that’s a trip I would want to make with Butterscotch, or any unicorn.”

“I would take a unicorn ride any day!” Dash said, landing next to Berry.

“Dash!” Berry exclaimed. “Lickin’ lollipops, you scared the sugar out of me.”

Dash giggled. “Sorry,” the small Mint Fairy said. “When Raina told me she was meeting you for lunch, I had to join in the fun.”

“And so did we!” Melli said, flying in with Cocoa.

Berry looked at the Caramel and Chocolate Fairies in front of her. “You came to see me?”

“Sure as sugar!” Cocoa said. “We missed you last night.”

“Were you talking about Princess Lolli’s trip?” Melli asked. She sat down next to Berry. “I know Berry wishes she could go. Besides Meringue Island, Cake Kingdom is the leading place for fashion, right, Berry?”

Berry shrugged. “Well, Cake Kingdom does have some sweet styles,” she said, thinking. “But I’ve never been there. I’ve only read about it in Sugar Beat magazine.”

The five fairy friends settled down to eat their lunch. It wasn’t often that they got to see one another during the day. Usually, each of the fairies worked in a different part of the kingdom on her own candies. This was a sweet surprise lunch.

They had just finished eating when a burst of chilly air lifted Melli up off the ground. “Brrrr,” she said, shivering. “What is going on? It was such a beautiful morning!”

“I think there’s a storm coming,” Cocoa said. She looked up to the sky and saw the dark clouds rushing overhead. “Bittersweet, I was so hoping for another warm night.”

“That isn’t going to happen,” Dash said, slipping on her vest. She carefully wiggled her silver wings through the slots in the back. “Nothing like a brisk spring evening to get the mint flowing,” she added. “And I have got some mighty mints to tend to. See you fairies later!” In a flash, Dash was gone. She wasn’t known as the fastest fairy in Sugar Valley for nothing!

Melli wrapped her shawl tighter around her waist. “What about your seedlings, Berry?” she asked. “They are not going to like this blast of cold.”

“Oh, it’s not so bad,” Berry told her. She looked up at the sky. “Winter has passed. Sure as sugar, the sun will warm us all tomorrow with another sunny day. I can’t wait!”

Berry’s friends shared a worried look. But they all agreed that by Sun Dip the next day they’d put their candies and finishing touches on the basket. They knew Princess Lolli was counting on them. And none of them wanted to disappoint the sweet fairy princess.
Helen Perelman