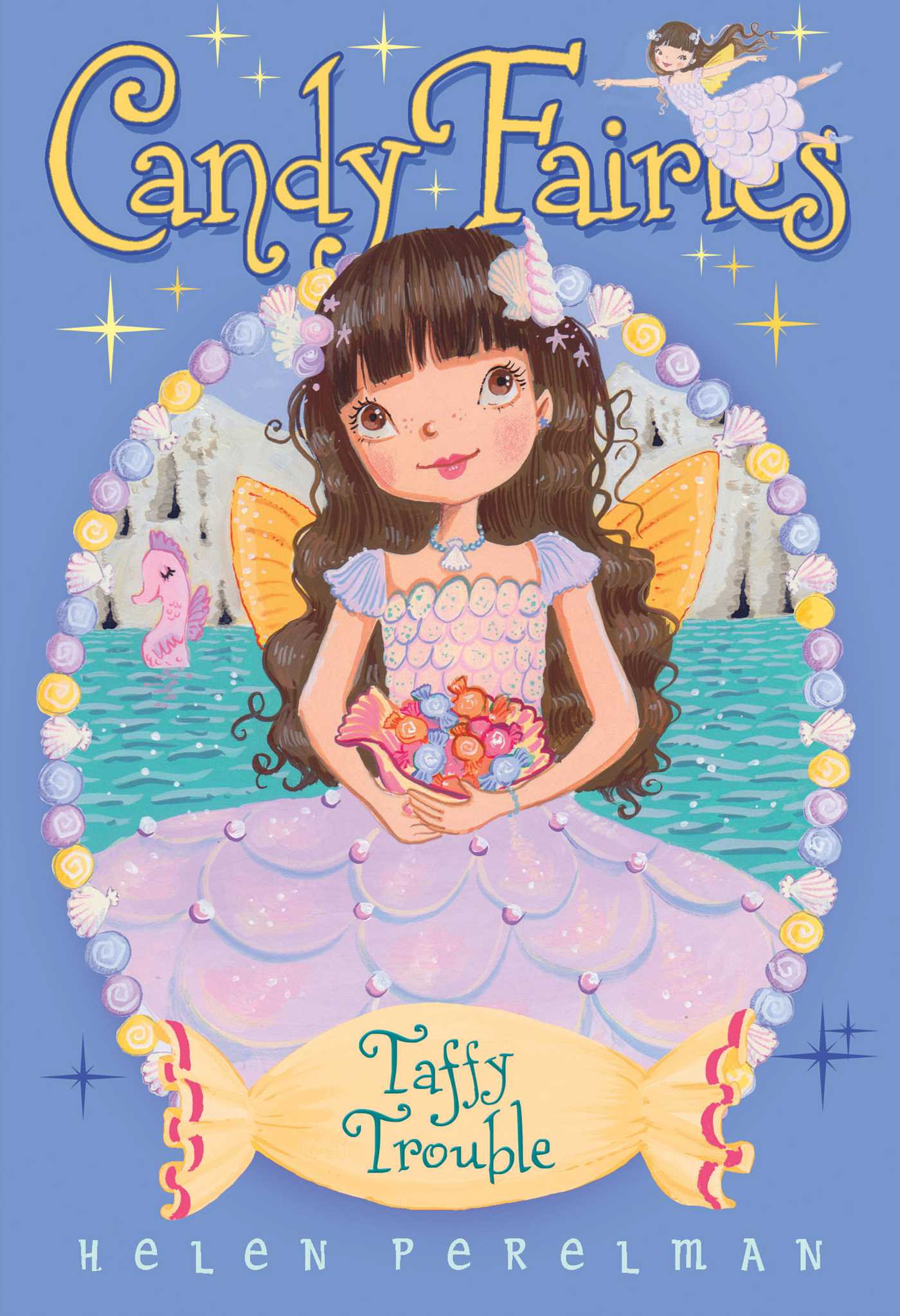 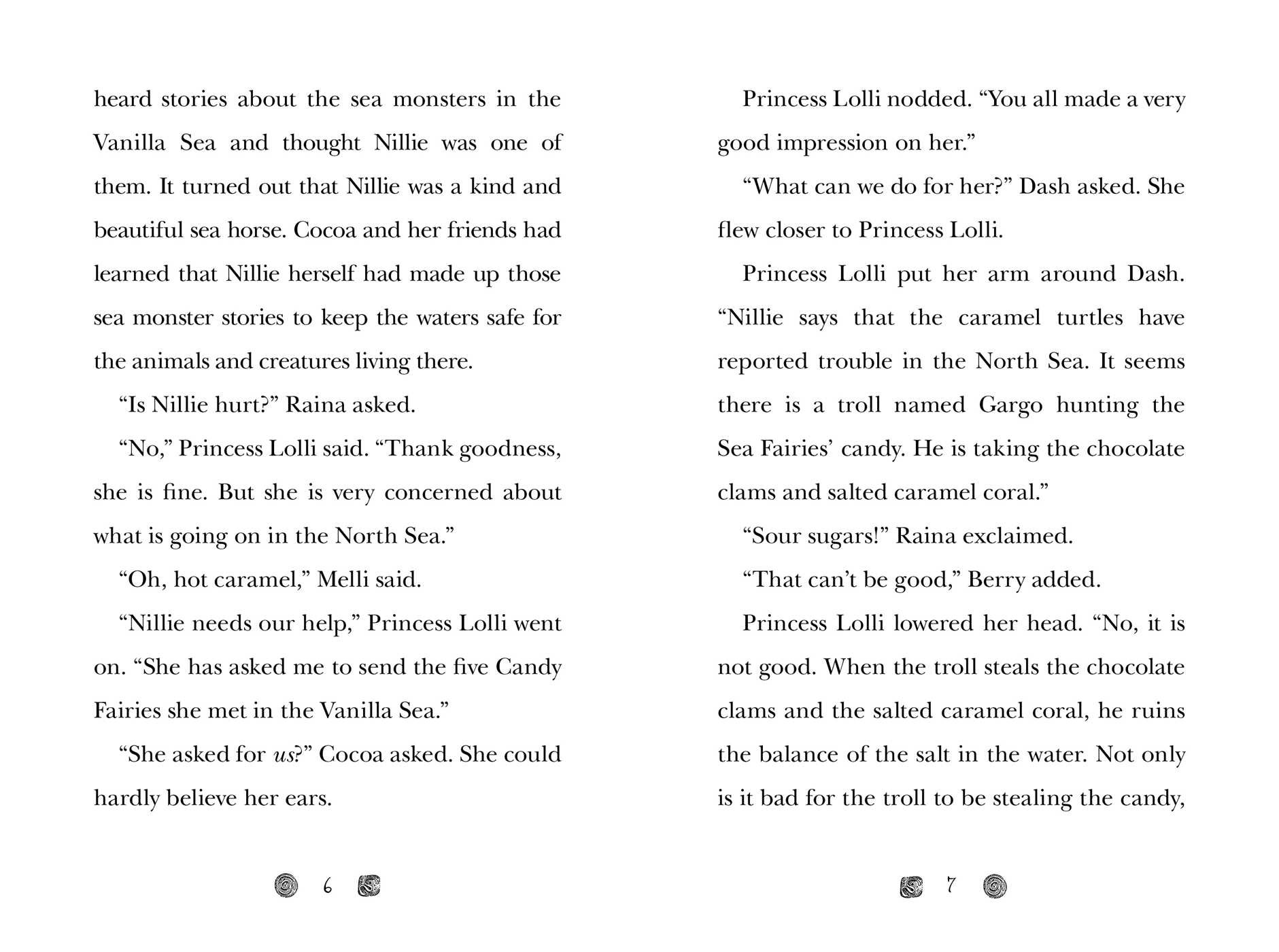 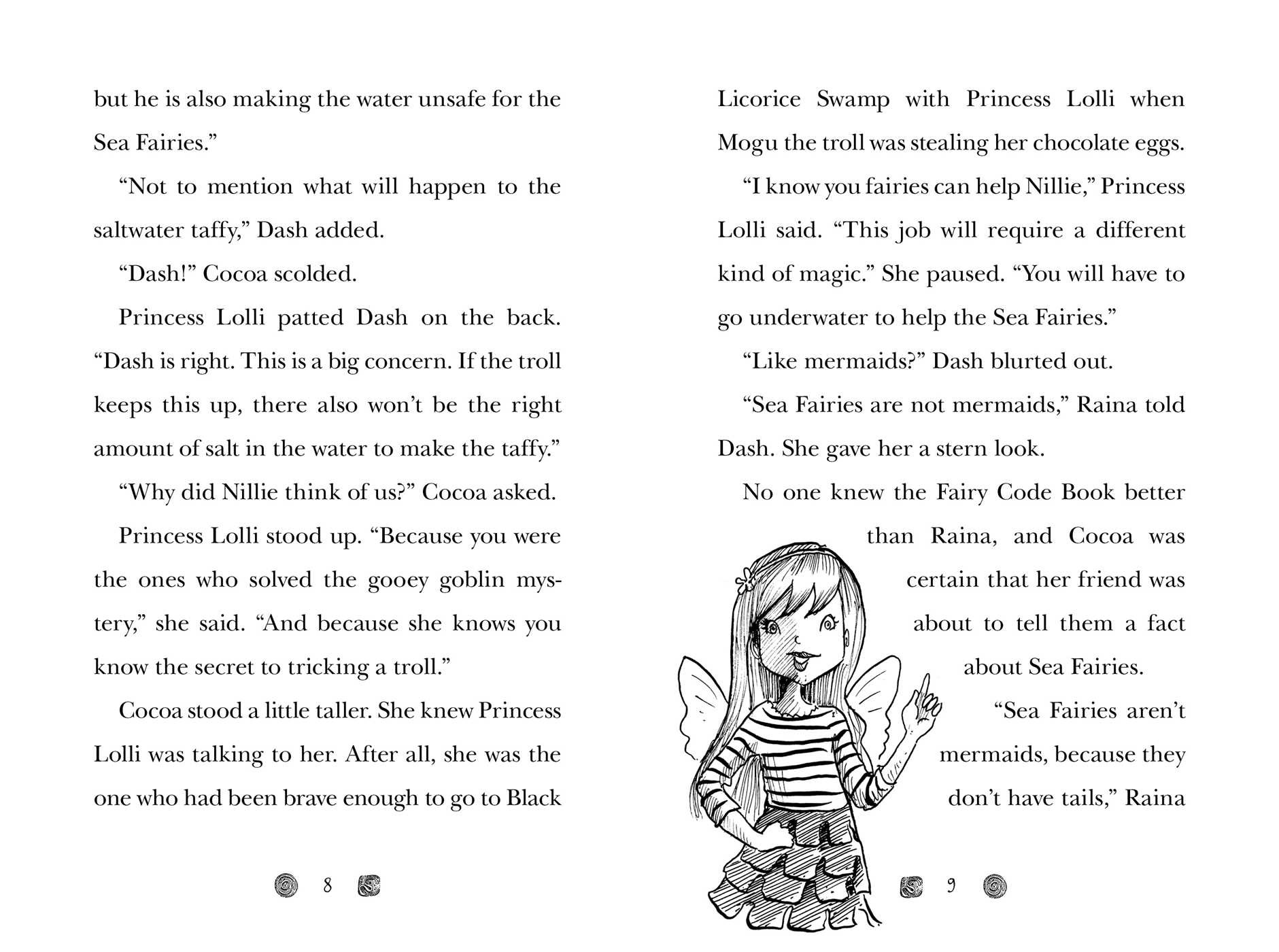 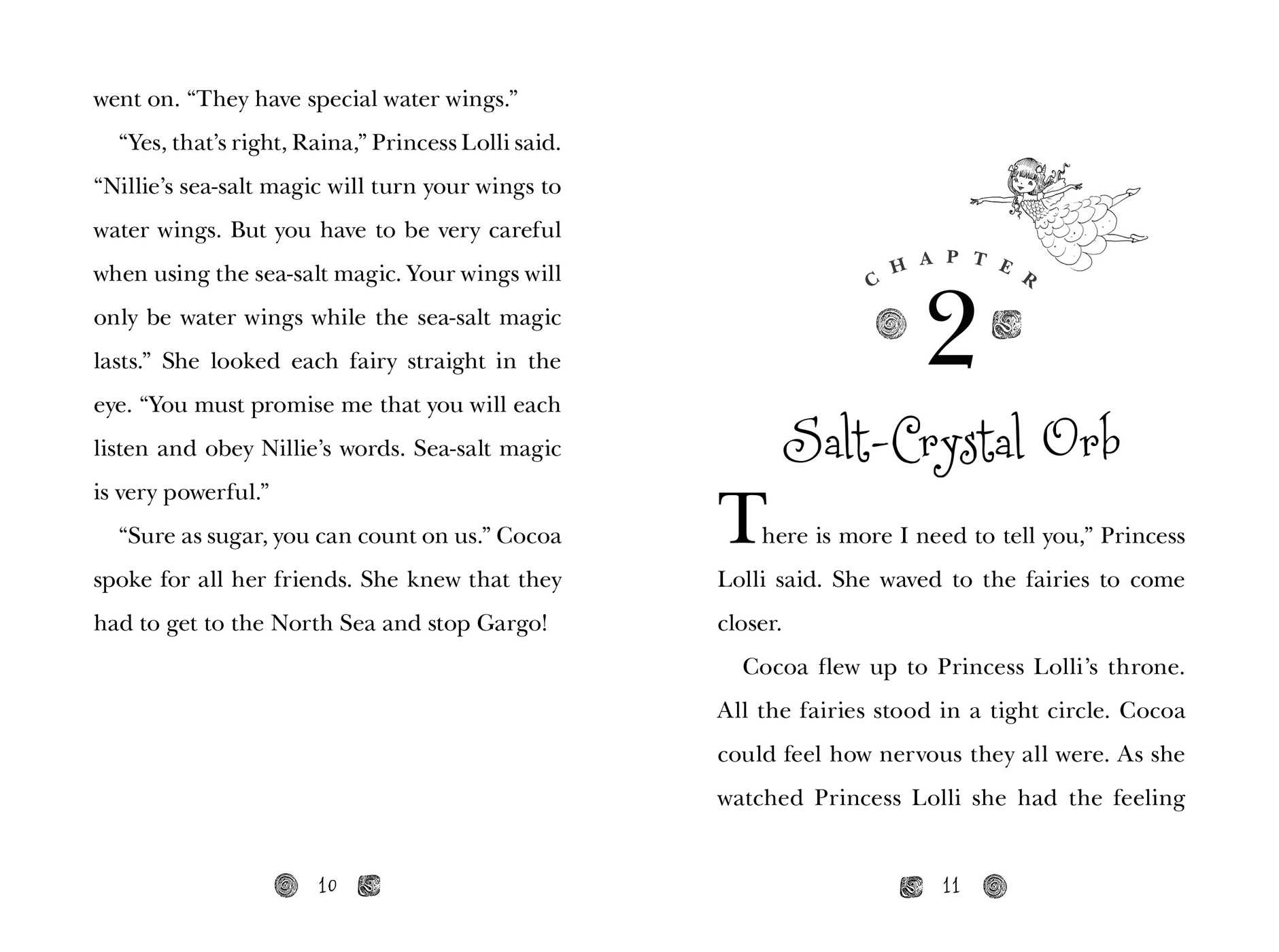 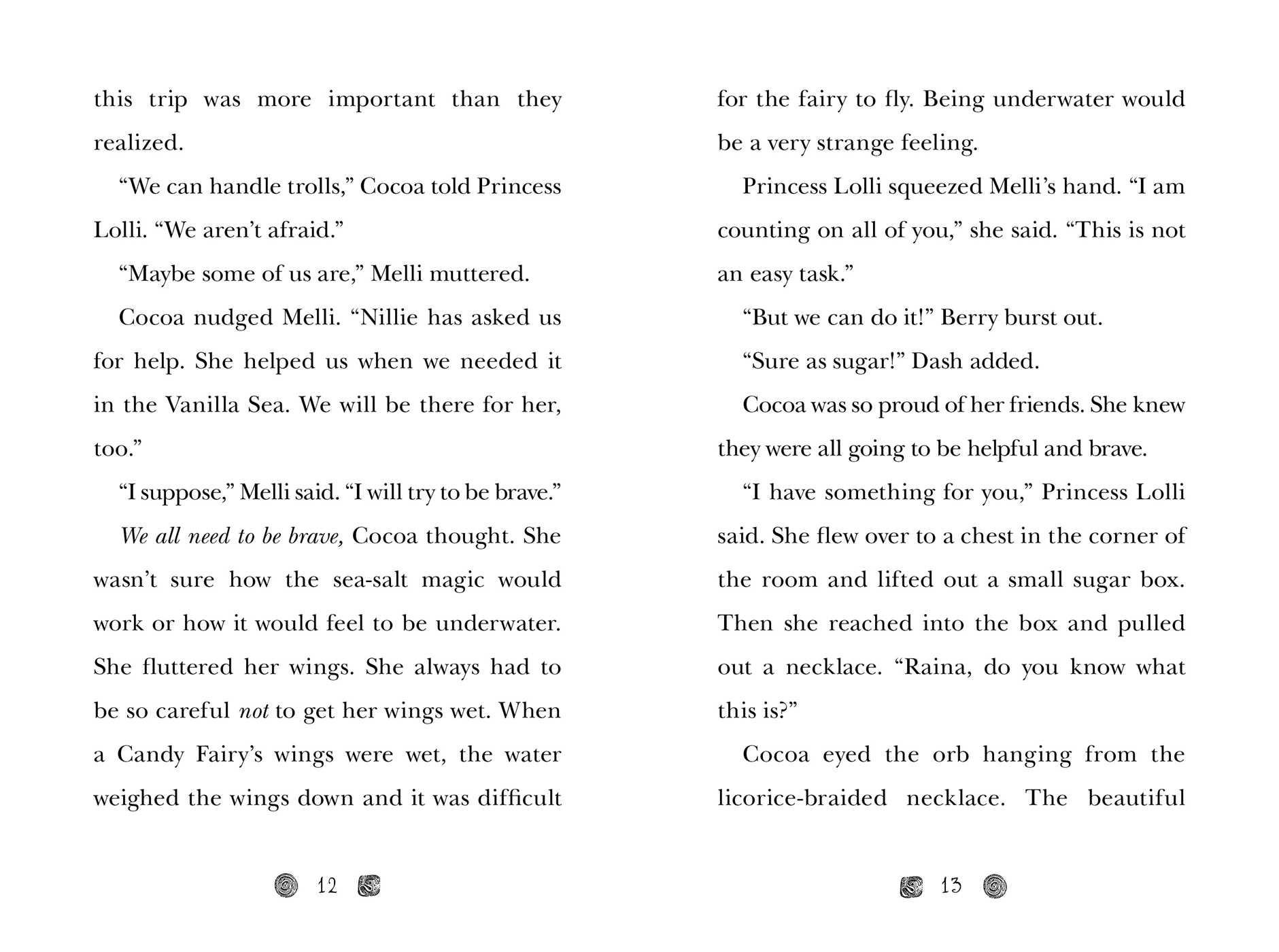 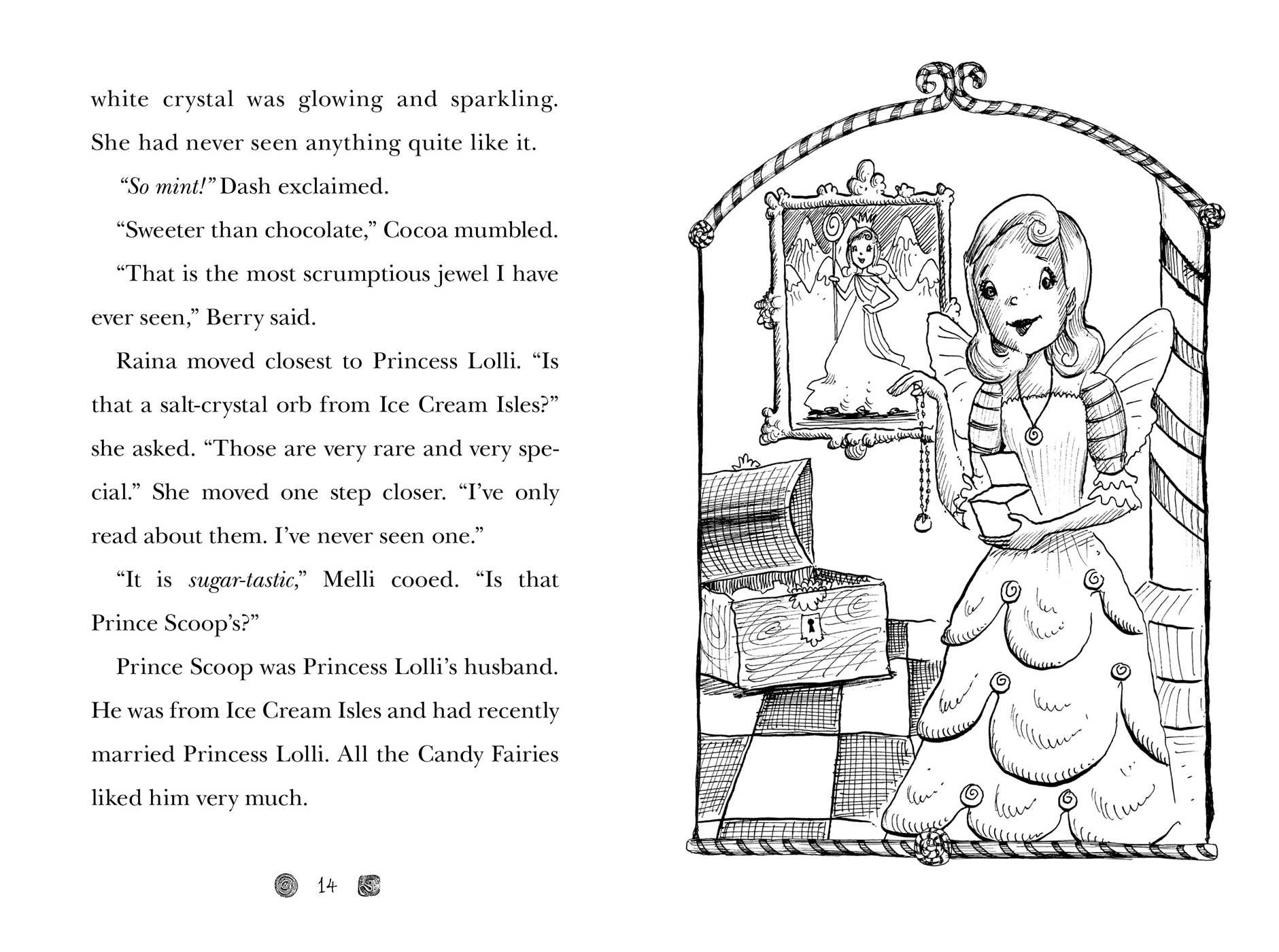 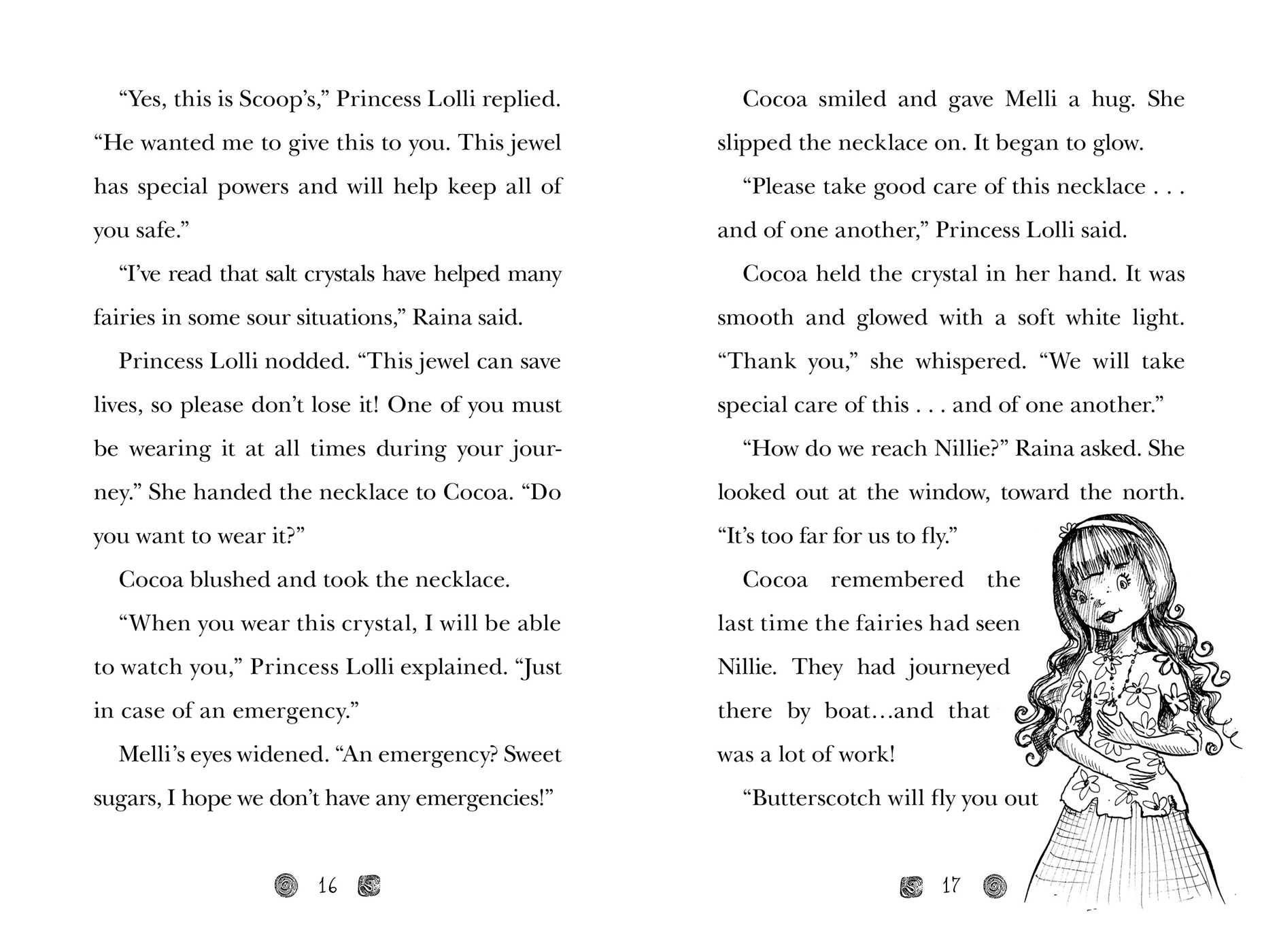 The Candy Fairies encounter the salty side of sweet when a troll disturbs the seawater and endangers all the taffy treats!

Cocoa the Chocolate Fairy helps a friend in need when she travels to the North Sea to aid Nellie, the seahorse. The caramel turtles have reported trouble: there are trolls hunting the Sea Fairies’ candy, and when the trolls steal the chocolate clams and the jellies, the balance of the salt in the water is disrupted. Saltwater taffy and other sea salt treats are in danger! The Candy Fairies are in for an underwater adventure, but can they save the salty day?

When Cocoa arrived at Candy Castle, she was very nervous. Her Caramel Fairy friend Melli was usually the one to worry. But this time Cocoa’s stomach was fluttering as fast as her wings!

The castle guard told Cocoa to go to the throne room. There, Cocoa was happy to see three of her good friends: Raina the Gummy Fairy, Melli the Caramel Fairy, and Dash the Mint Fairy.

“Princess Lolli will be with you in one moment,” the guard told them. Cocoa looked at her friends. They all shared the same worried expression.

“Is Berry all right?” Cocoa asked. She saw that her Fruit Fairy friend was not in the throne room.

Just then Berry flew into the room. She was panting. “I got here as fast as I could,” she said. “Did I miss anything?”

Cocoa could tell that Berry was worried something was wrong. Berry was late to everything because she always had to look her best. She usually arrived in a stylish outfit, with matching sparkling fruit chews in her hair. Cocoa saw that Berry had not bothered to change out of her gardening clothes. She had come straight from her work in Fruit Chew Meadow.

“We’re waiting for Princess Lolli,” Raina said to Berry. “We were told she would be here any minute.”

Melli bit her lip. “This doesn’t feel right. Something is wrong.”

Cocoa agreed. Something about this meeting made her feel uneasy.

“Hello, my sweets,” Princess Lolli said as she entered the room. “Thank you all for coming so quickly.” Her expression changed as she sat down on her throne. “I have gotten sad news from Nillie,” she said.

Cocoa gasped. Nillie was the gentle sea horse who watched over the Vanilla Sea. Cocoa and her friends had met the sea horse when they were traveling across the Vanilla Sea to solve the gooey goblin mystery. At first the Candy Fairies had been scared of her. They had all heard stories about the sea monsters in the Vanilla Sea and thought Nillie was one of them. It turned out that Nillie was a kind and beautiful sea horse. Cocoa and her friends had learned that Nillie herself had made up those sea monster stories to keep the waters safe for the animals and creatures living there.
Helen Perelman